KTM 500 2-STROKE PROJECT: BEHIND THE BUILD

The Ride Shop AZ does it again 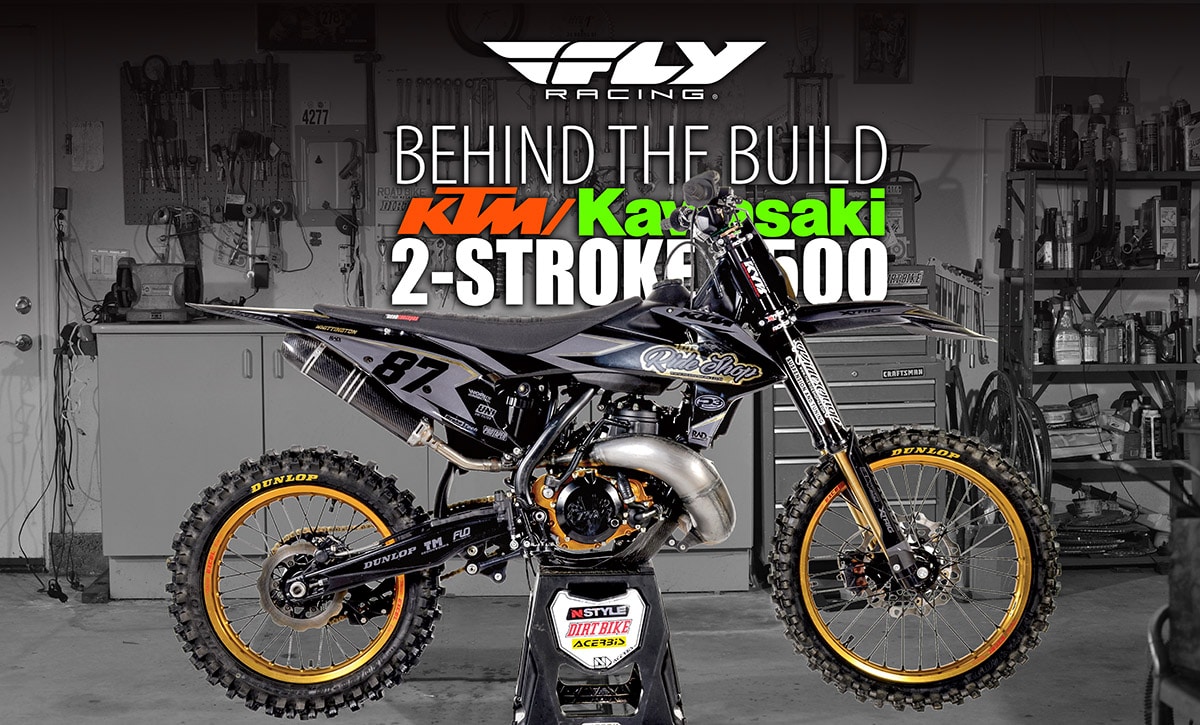 KTM is one of the manufacturers still pushing two-stroke motorcycle technology advancement in the industry today, but unfortunately the largest displacement is 300cc. Johnny Weisman and his crew at the Ride Shop AZ decided to combine brand-new technology from KTM, some very proven old-school two-stroke technology from Kawasaki and some aftermarket bolt-on performance items from industry-leading companies to create what we have named the “Dark Knight KTM 500”.

Johnny Weisman is the kind of person who makes the motorcycle industry thrive. You know, the type who always has something in the works that will make people stand back in awe at what he has created. After the Honda CR500-powered Husqvarna that Weisman brought us to test last year, the bar was set pretty high, so when we first spoke about his Dark Knight KTM 500 project, we wondered if he could pull it off. Of course, this inspired us to be part of the entire process. 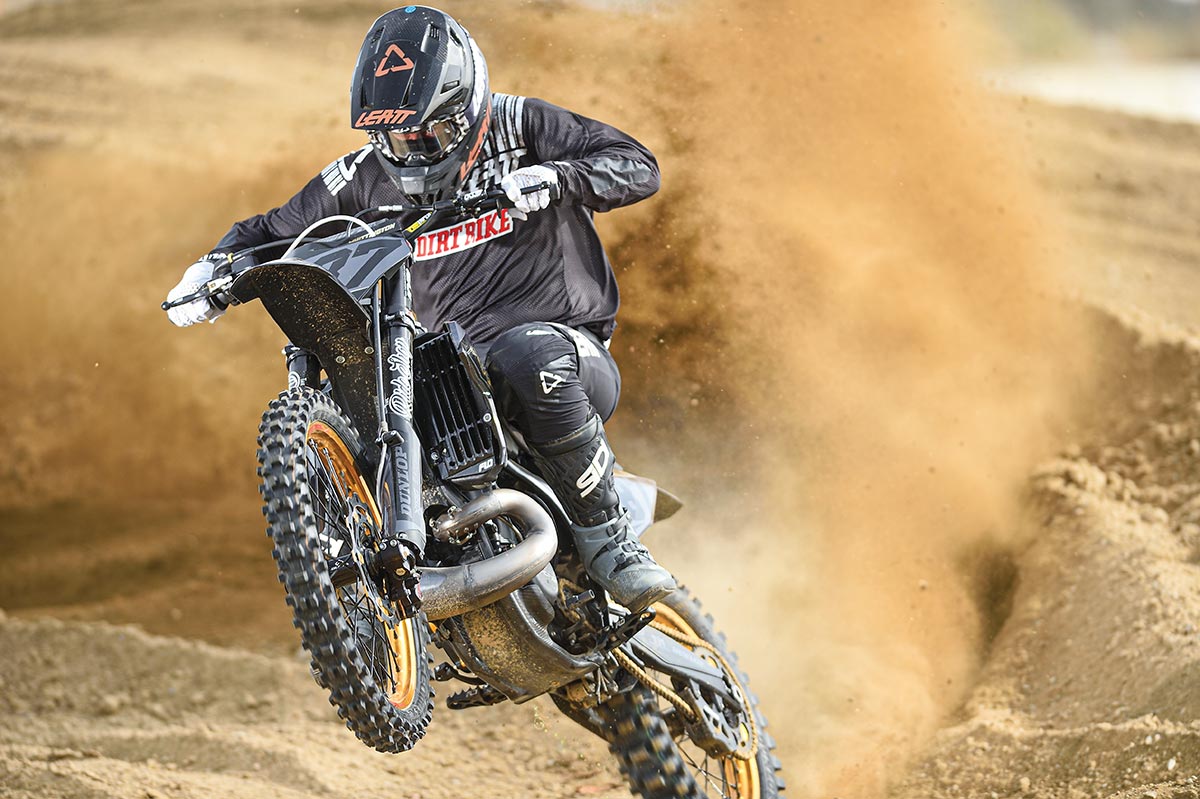 Locating a 2020 KTM chassis was definitely the easiest part of the build. After all, the chassis is still in production. It is a little harder to find during a worldwide pandemic, but if you are willing to spend enough cash, it can just appear out of thin air. Acquiring the chassis was still only the first step in Weisman’s process. The frame would still need to be modified pretty heavily to accept the Kawasaki KX500 two-stroke powerplant, and with builds like this, things rarely go as planned. 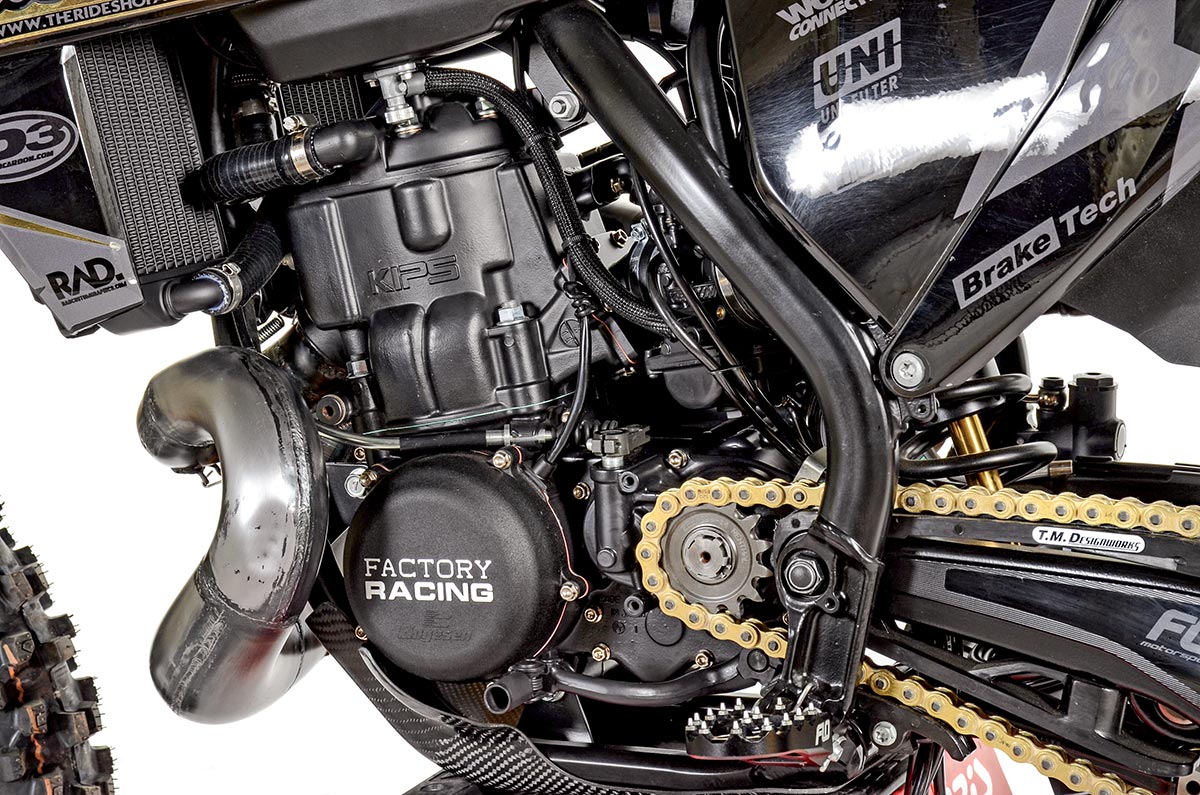 With new engine mounts configured and welded in place and the subframe squared away to accept a newly modified intake configuration, it was time for a black coating. The main frame, swingarm, linkage and subframe were sent out, while the focus shifted to suspension. Up front, black Xtrig clamps replaced the OEM KTM units, and the fork setup was converted from a WP air system to a spring system using primarily Kayaba components. Some of the original WP internal parts were also used, but they required modifications. The shock was also highly modified internally with valving, and both ends received specialty coatings matching the overall black-and-gold theme.

Dubya laced up a set of wheels using gold Excel rims, black spokes, black nipples, and black Hahn billet-aluminum hubs. Weisman got extremely lucky finding a low-hour, all-original unit to start with. KX500 historians will notice the removable clutch cover that was only found on some factory machines back in the day. These kits are available from TSR and designed specifically for conversions using KX500 engines but can also be used on stock KX500s. 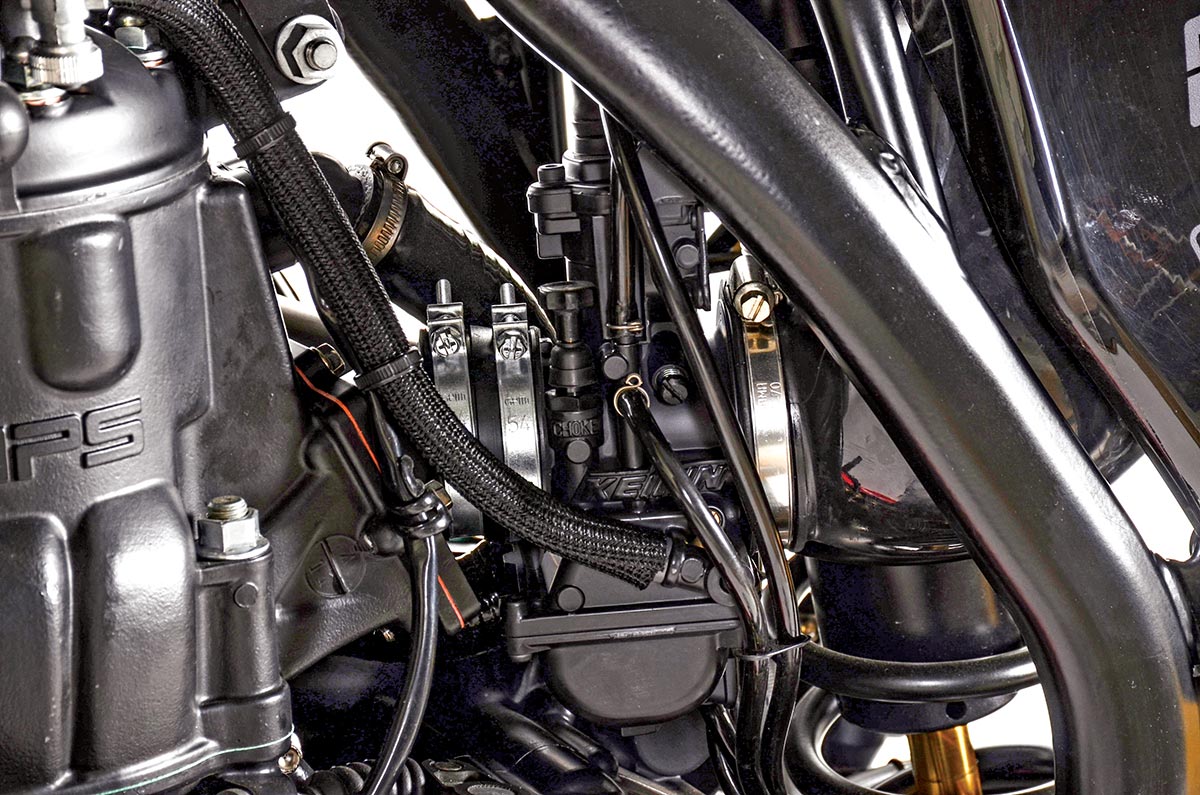 The new water-pump design allows the water-inlet hose to be placed under the pipe and into the back of the cylinder for more clearance on the pipe. The water pump uses all standard KX500 bearings, shaft and seals. These units are not cheap, but they do allow access to the clutch and water-pump system without removing the entire right-side case. Weisman coated the new inner case gold for some added bling, with a Supercooler system from Boyesen and a black KX450 cover from TSR. Internally, the engine was completely rebuilt with all-new seals and bearings. Minor port work was also done, but nothing crazy, while the crank was rebuilt and balanced by Crank Works.

With builds like this, finding an exhaust system that bolts up without modifications is almost impossible. The expansion chamber was originally produced by Pro Circuit but needed major modifications by Weisman to mount up to the KTM chassis and navigate around the engine and radiators. Oh, and don’t forget clearing the front wheel. Finding a silencer was a bit easier. Scalvini makes a full carbon silencer that has removable mounting brackets that can be modified without huge amounts of work. Because it was originally designed for a Honda CR500, Weisman had to take inches off the overall length to make it fit. As with the chassis, once the performance modifications were complete, it was time for lots of specialty coatings. Even the new 38mm short-body Keihin Air Striker carburetor got coated black. Some parts were easy to find. The chain, the levers and the perches  all came from Fly Racing hard parts.

What’s it like to ride the Dark Knight KTM 500? Well, it’s a very unique experience that every two-stroke enthusiast should have before he leaves this earth. Comparing this Ride Shop AZ project to a modern motorcycle is virtually impossible. The KX500 engine makes huge amounts of power down low but needs to be short-shifted to stay in the meat of its power. And, don’t even think about power shifting it under a load; it will not happen. Some things never change. We aren’t really sure what type of magic Weisman performed, but this KX500 engine starts more easily than some 125cc machines we have tested in the past, and the modifications done to the clutch control arm made it pull more like that of a modern 250 two-stroke.

Handling-wise, the Dark Knight had some issues initially. It was really busy, with most of that coming from the rear end. Once the sag was set and the clickers dialed in, the handling calmed down, and we got to experience just how good the KYB spring conversion kit is for the WP air fork. This one-off creation from Weisman is not for everyone, but even putting aside how it performs, no one can deny this thing is a work of art! The all-blacked-out look with gold accents throughout was definitely not easy to pull off, and the attention to detail on smaller items proves that this was a passion-driven build. We can’t wait to see what Weisman and the Ride Shop AZ come up with next, so stay tuned!