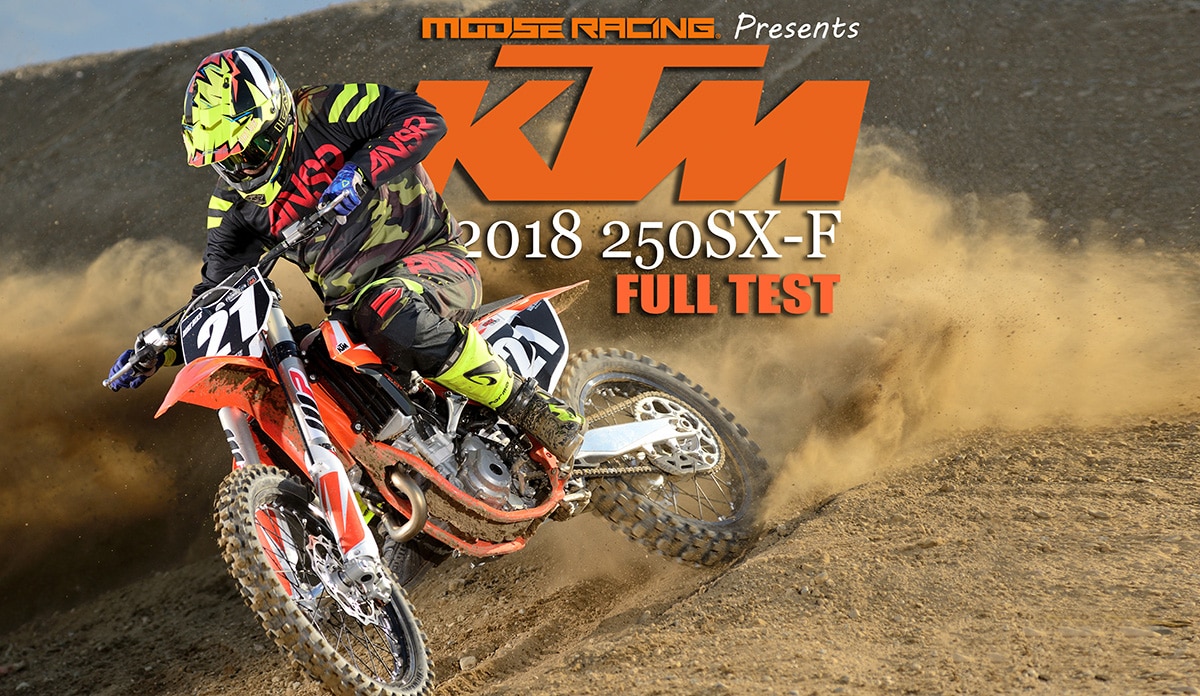 There’s no mistaking the KTM 250SX-F for something it isn’t. The bike is a racer, through and through. It’s currently the lightest, the fastest and one of the most expensive machines in its class. It isn’t for everyone, but if you’re a pure motocross racer, you’re KTM 250SX-F material.

RACE ME
KTM made big changes to this bike in 2016 and 2017, but for 2018 the engineers were allowed to take a breather. There are only a few changes. You can count them without taking off your shoes. The fork and shock have different valving. The radiator louvers are altered. The battery is more powerful. The clutch-plate material has been altered. There’s a change in the shifting mechanism. The frame is orange, and there are some cosmetic differences. The bike has been in a constant state of change in previous years, so there’s still a lot to know. The motor is a short-stroke, double-overhead-cam design that uses finger-followers between the cams and the valves. KTM was the first to use this on a motocross bike, but now Honda has followed suit with the new CRF250R. Two years ago KTM did away with the kickstarter provision. It’s electric start or nothing now. The motor has a five-speed gearbox with a fairly conventional coil-spring clutch. Most of KTM’s other bikes have moved to the DDS clutch with a diaphragm spring, but the engineers still feel that this clutch is best for this power delivery. As with virtually every other bike in the KTM line, the clutch is actuated by a Brembo hydraulic master cylinder.
What really put KTM on top last year was the change to a WP AER 48 air fork. This is a little counterintuitive in a time when the Japanese are all going back to coil-spring forks, but the fork was a huge step forward for KTM, and the universal opinion is that it’s the best air fork on the market. Beyond simple performance, that fork was the most recent step in a progressive weight-loss program. The current version of the SX-F is 218 pounds without fuel. That’s pretty impressive considering that a Suzuki RM250 two-stroke was 225 pounds in 2005.
Last year’s model also got a multifunction handlebar switch that lets you alter the power output. First of all, you can choose between the standard map (number one) and an aggressive map (two). You can also put the bike in traction-control mode, where the on-board computer tries to prevent sudden rpm gains that match the profile for wheelspin. Finally, there’s also a launch-control mode where the bike’s output is tailored for traction off the line.

POWER KING
All those power settings make noticeable differences, but none of them change the underlying fact that this is the fastest production 250 four-stroke we’ve ever tested. It’s not just a little bit faster, either. The KTM and the Husqvarna FC250, which share the same motor, are far more powerful than any of the Japanese 250 four-strokes from about 8000 rpm up. The motor hits the rev limiter at just over 14,000 rpm, so that gives you a very wide, usable powerband. If you’re riding it right, you don’t have to shift that much, but you do have to keep in mind that it’s all on top. The number-one mistake that most riders make on the KTM is not revving it enough. If you don’t hit the rev limiter three or four times a lap, you’re leaving a lot of performance on the table.
Once you make the mental adjustment to fearlessly scream the KTM like you’re trying to hurt it, everything works better. You can leave it in one gear through long sections of track that have most 250s shifting up, down and up again. There are some side effects of readjusting what you perceive to be normal, rpm-wise. At high revs, everything happens a little more frantically. Engine braking is greater, and there’s a lot more noise. All that takes a little adjustment time, but the bottom line is that you don’t passively ride the 250SX-F. You ride it hard. Pro riders have no trouble doing that, but novices, intermediates and vets will generally find it’s easier if the KTM is geared lower. If you add two or three teeth to the rear sprocket, you’ll find it’s not as difficult to pull second gear through tight turns, and you won’t have to abuse the clutch as much. The clutch can take it; it’s almost indestructible, but there’s a certain amount of mental fatigue that can be lessened with an easy gearing change.
It’s not difficult to tell the difference between the various functions on the handlebar switch. Map one and two have different feels, although they’re both pretty aggressive. With map two, the power hits a little later. As far as traction-control mode goes, most riders found sections of the track where it could help, but no one felt it was a benefit for an entire lap. At this point, this is still a feature that’s in development. The true advantages of traction control are yet to be seen. Launch mode, on the other hand, has some big fans. They say you can just hold the bike wide open until the gate drops, and the bike does the rest. This isn’t true, of course. Every bike has its own quirks when it comes to starts. The technique is simply different when the KTM is in launch mode. The hardest part is activating the switch, which doesn’t always work, and it’s easy to deactivate by accident before the gate drops.

SPINNING LAPS
Once you figure out how to rev the KTM, the rest is easy. The bike likes going fast. The fact that it’s light is half of the magic. The suspension is the other half. We’re still not completely on board with the concept of air forks, but it’s hard to find anything wrong with the WP AER 48 fork. We’ve never had a problem with air loss, and we’ve raced and used this fork on about a dozen different test bikes. Of course, we still remember its predecessor all too well. The notorious 4CS coil-spring fork was harsh and hard to adjust. The WP air fork was such a dramatic improvement that we couldn’t help but like it. The best thing about it is that it’s easy to use. There’s one air chamber, and checking it is simple. If it’s off by 5 pounds, it’s not the end of the world. And, you know what? It works! The KTM’s front end is plush and smooth. The recommended air pressure is 157 pounds, which we thought was far too much last year. This year, with all the valving changes, that pressure is appropriate for heavier riders. Most riders under 170 pounds will still set it around 152 pounds. The damping clickers are much more effective than they were on the 4CS fork, and, in general, most riders like to slow things down a little in both compression and rebound. The rear end is actually a little more difficult to set up. The shock likes more sag than you might expect. Start at 110mm and try to do all your fine-tuning with low-speed compression damping. When the KTM is set up right, it’s hard to do anything wrong. The bike is stable, it turns well and doesn’t do anything wicked.

LEARNING THE ROPES
The reason we say the KTM isn’t for everyone is because it has certain expectations of its rider. It isn’t the type of bike you leave in a corner of the garage for a month or two between rides. The battery will lose a little of its charge. The fork will lose a little of its pressure, and you’ll lose a little of your edge. You won’t ride it with the confidence that it demands, and, in fact, you’ll probably wish you had a milder motorcycle. The KTM is a highly strung bike suited for a highly strung rider. The reason it won our 2018 shootout is because that’s the profile of most 250F riders—young, aggressive and fit. 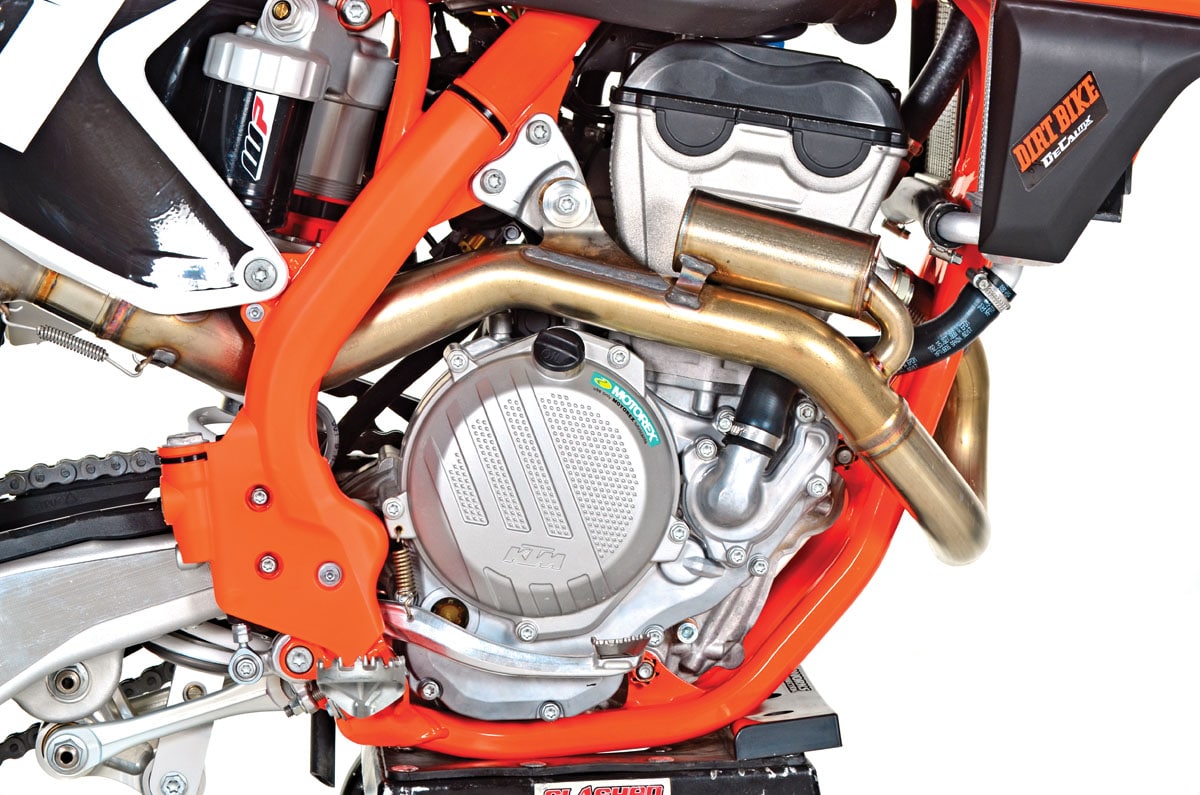