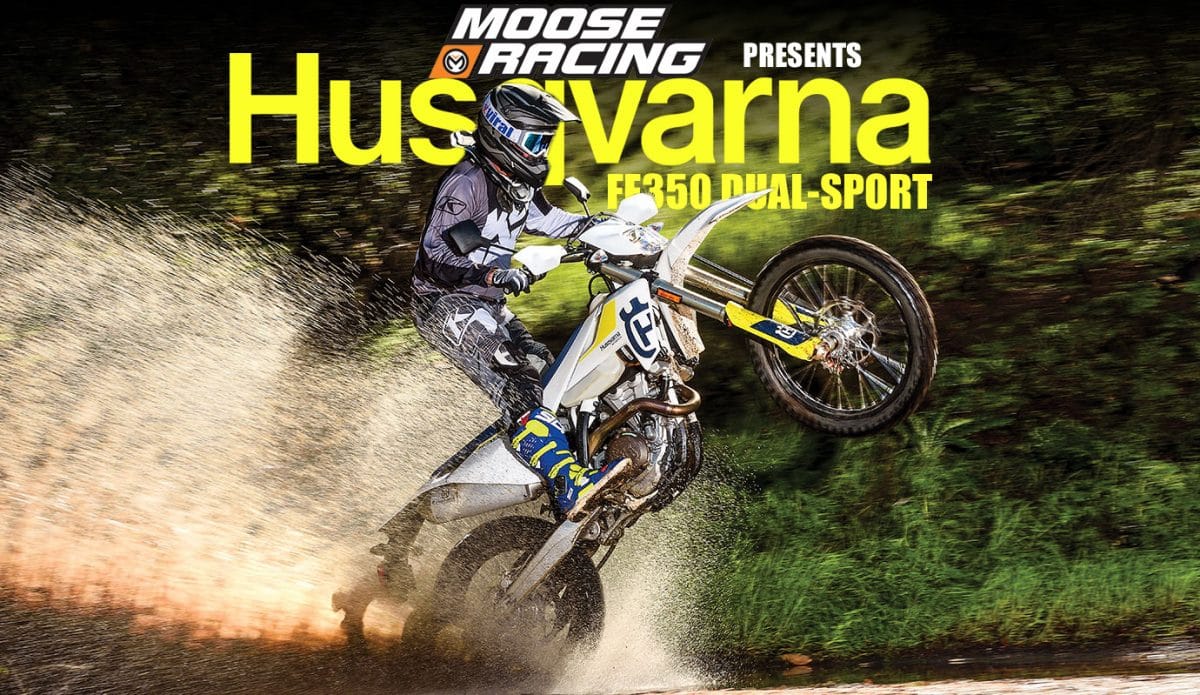 Is the Husky FE350 the ultimate dual-sport? The 350 is Husqvarna’s most popular engine platform, and it’s a sweet motor in any costume, whether it’s motocross, cross-country or dual-sport. It just so happens that the FE is the sweetest and most pleasant of all. The FC350 motocrosser and the FX350 cross-country racer have completely different chassis in 2019 that were influenced heavily by the demands of Supercross. The FE was designed as a trail bike first and a street-legal motorcycle second. 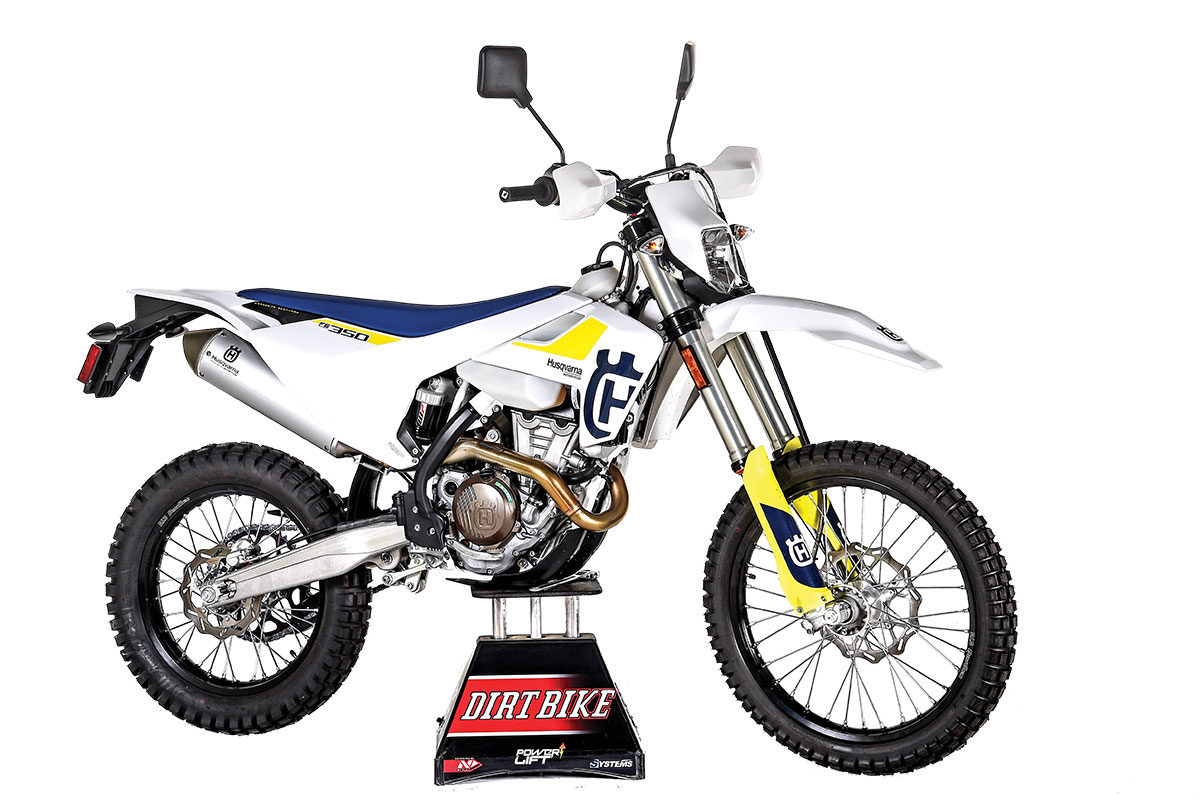 THE MAKING OF A DUAL-SPORT

This year might be a passing window for the current version of the FE350. The 2019 motocross bikes in the KTM and Husqvarna lines got more rigid frames, while the dual-sport bikes were left with a version of the previous chassis. That’s good, because the older chassis is generally considered more compliant and comfortable. It can trace its genesis from the 2018 FC350, but in the process of being made street-legal, there were quite a few changes. The motor became a six-speed, and the power output was changed for two reasons: first to make it more acceptable for off-road use, and then to allow it to pass emission and noise regulations. That was tricky. Intake and tire noise, in particular, made it difficult to pass the ride-by sound test. The engineers resorted to installing a reed valve in the air boot between the filter and the throttle body. If you look at the part, it appears to be the same as the reed in a Husky TC65 two-stroke. The airbox and muffler are restrictive to deaden noise, and even the Continental TKC80 tires were chosen because they’re less noisy than knobbies, even DOT-approved ones.
The list of emission equipment is fairly familiar. The EFI system is designed to be tamper-proof. There is a small SAS air-injection system on the left side of the engine and a charcoal canister in the frame.

Husky did a great job of hiding these—in stark contrast to the Honda dual-sport that has them out in the open. The  motor uses a lower compression ratio (12.3:1 versus 14:1) than the motor in the competition version. The throttle body is 2mm smaller. The cams are different, first gear is lower, second gear is the same, and all the other gears are taller in the dual-sport version, plus there’s a sixth gear. And, the FE has engine cases that allow the addition of a kickstart lever if you don’t trust the electric starter. In the suspension department, the FE uses the Xplor 48 coil-spring fork and a WP shock that uses linkage. 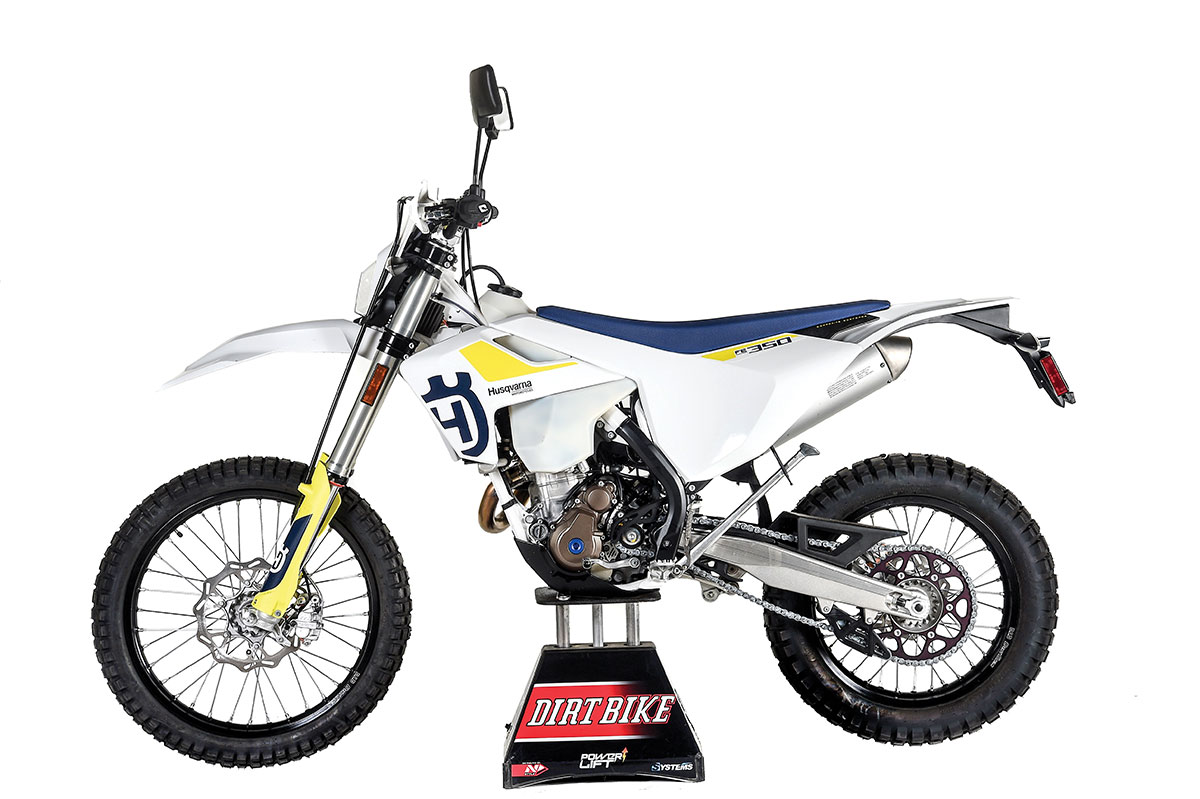 If you’re comparing the Husqvarna FE350 to its KTM counterpart, the 350EXC, there are a few big differences worth noting.

Additionally, there are differences in the seat cover, the handlebar and the wheels, but the two bikes have motors that are essentially identical.

You have to be honest with yourself when you’re considering an FE350. If you really want a bike for trail riding, there’s almost nothing better. You just have to know that it’s not an especially powerful motorcycle. Most dynos put it around 35 horsepower, which is considerably less than a 250F motocross bike and about the same as a good-running 125, at least on top. There are eco bikes that are much faster. When it comes to trail riding, though, the power is more than enough, and the nature of that power is excellent. It’s responsive, smooth and virtually glitch-free. That last point is critical if you’ve dealt with EPA-certified dual-sport bikes in the past. Usually they cough, backfire and stall. They can be hard-starting and have a tendency to run very hot. That’s not the case here. The FE350 is just a good-natured, quiet bike that runs well and does exactly what it’s asked. It’s one of the cleanest-running EPA-legal bikes that we’ve tested. KTM equipped the bike with a radiator fan, which is very effective at keeping the bike from steaming on tight trails.
If you’re a hill-climber or you ride in western sand washes, you’ll occasionally want more power than the Husky has in stock form. Be warned; if you go looking for more muscle, you have to be all in. The bike is extremely quiet, so the knee-jerk tendency is to install a competition pipe. Putting aside the issue of legality, a pipe alone is a bad idea and will make the bike run worse than stock. The intake, fuel mapping and exhaust were all designed to work together. If you change one, it throws the whole universe out of balance. 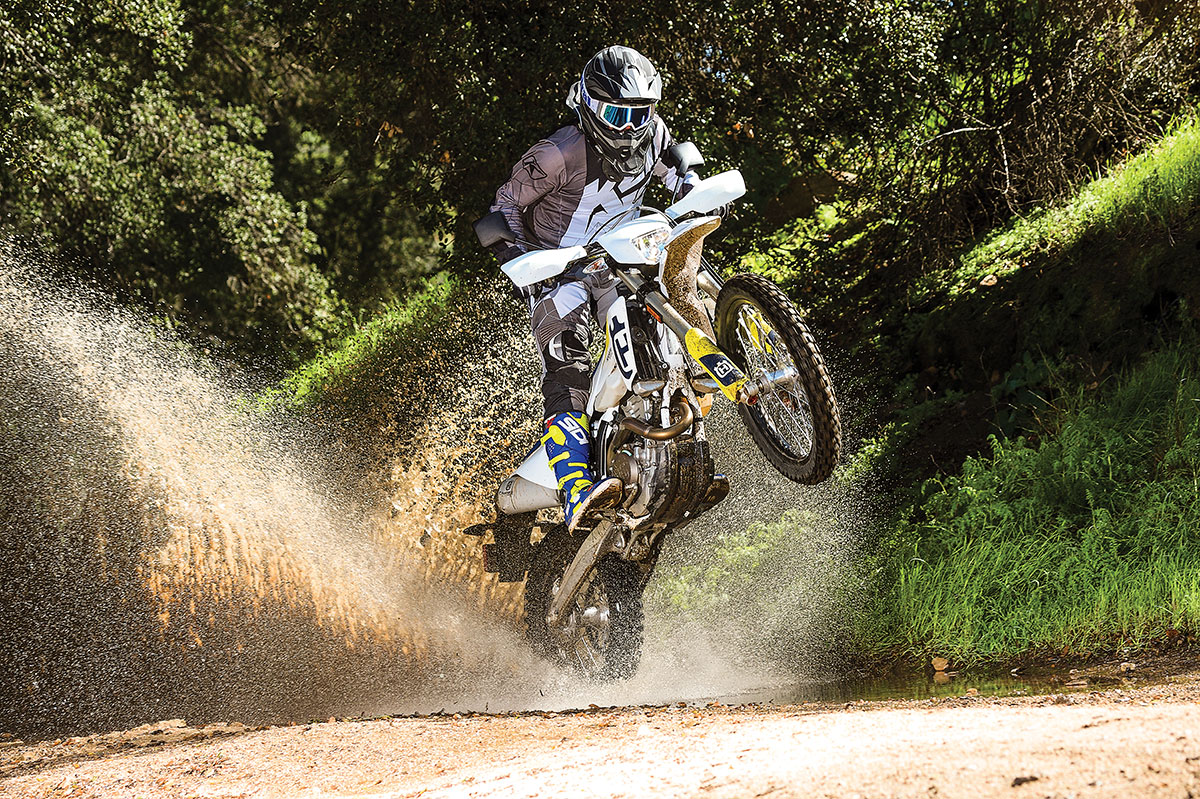 It would be a far better use of your energy to deal with the suspension and tires. The Husky is an incredibly good-handling bike, but you’ll never know that until you install more aggressive tires. There are lots of DOT-approved knobbies that will do a better job than the Conti TKC80s. You’ll also need to install rim locks. As delivered, the rim locks are supplied but not installed. If you put one rim lock on each end, you have to balance the wheels or the bike will shake like crazy on the pavement. Once you’ve done that, it’s clear that the bike’s handling is just as sweet as its power delivery. It’s a soft, gentle bike that’s super easy to throw around. The bike is genuinely light. Without fuel, it weighs 243 pounds. That makes it the lightest dual-sport bike we’ve tested this year, although we expect the KTM version to be a few pounds lighter because of the PDS rear suspension. It’s still super easy to manhandle. As we’ve pointed out in the past, a 350 feels much, much lighter than a 450 because of less crank mass. A crankshaft is just a big gyro, and the heavier it is, the more it wants to fight you. The FE350 feels like it’s 30 pounds lighter than a Husky FE450, which actually is 30 pounds lighter than a Honda CRF450L.

You do feel the effects of weight under hard braking. The Magura brakes actually work surprisingly well, but the fork dives more than you might expect. The Husky has very, very soft suspension. That’s great for low speeds on tight trails, but it limits how hard you can ride. It’s even soft for the streets. That’s why we would recommend spending your mod money on suspension rather than motor stuff. We still aren’t especially fond of the Xplor 48 fork, but stiffer springs would make a big improvement for most riders.

If you decide you need more power out of the FE350, you aren’t alone. The internet is full of advice—some of it bad, some of it good. Just keep in mind that anything you do makes the bike illegal in the eyes of the Feds, although enforcement is different in each state. More important, it might void the six-month warranty. Those who brave those dangers and build a competition bike must take a three-way approach: intake, exhaust and mapping. For the intake, many people install the intake boot from the FX350, thereby eliminating the reed valve. There are a number of exhausts out there, but changing the mapping is a little more complicated. Vortex makes a programmable ECU, and JD Jetting makes a piggyback EFI modifier that’s considerably more affordable. With a little testing, you can make about a 5-horsepower difference just with those changes. Next on the list is removing the SAS pump, which must be done properly. Blais Racing Services makes a good kit. That doesn’t result in a power increase, but it can reduce that annoying popping on decel. To go beyond that, you have to look at increasing the compression ratio, and the water gets even murkier. Our advice: if you want a race bike, buy a race bike. The FE350 is a sweet trail bike that needs very little to be satisfying and trouble-free. Making it into something else is missing the point. The goal, remember, is having fun, and the FE350 is already there. 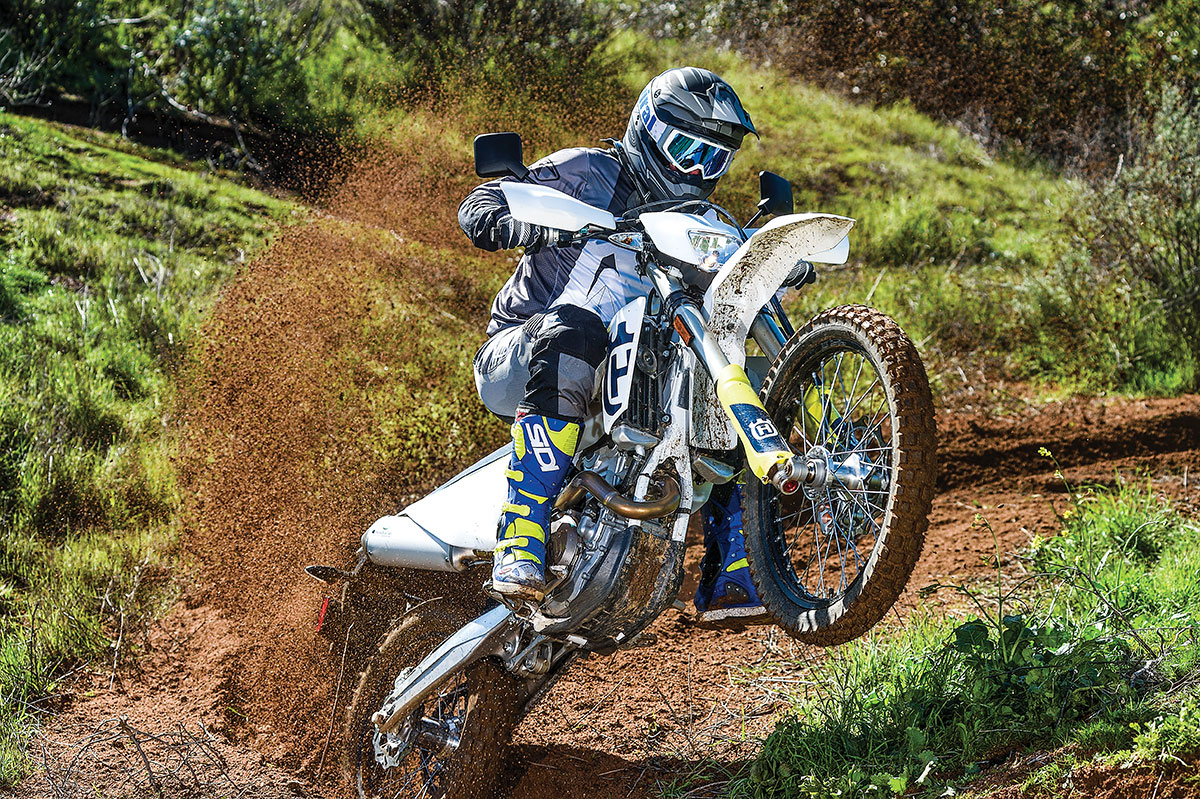