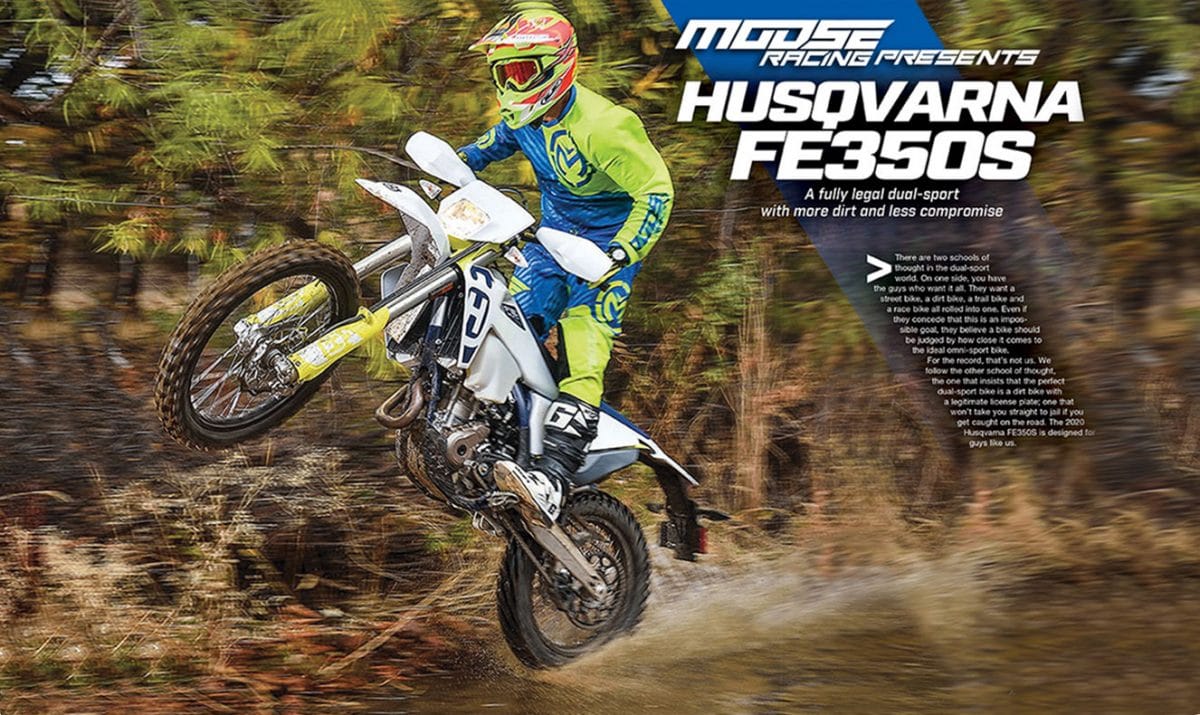 CHOICES, CHOICES
This year there is a new dirt-only version of the same bike. The street-legal one now has the “S” on the end. Both variations have the newer frame design and bodywork that were introduced on the motocross bikes two years ago. The dual-sport version is a little quieter and a little cleaner than the all-dirt one and has full DOT equipment. And the S is, in fact, super quiet. This goes way beyond the muffler. Husky paid attention to noise coming from the intake, the tires and the drivetrain. That’s why the bike comes with Continental TKC80 tires, which are more appropriate for big adventure bikes. That’s also why it has a reed valve in the air boot between the filter and the throttle body. The Husqvarna guys claim this not only reduces intake noise picked up in the drive-by sound test, but it actually benefits low-end power so much so that they tested it for the motocross bike.

The real accomplishment here is that Husqvarna passed all these tests and met all these requirements without cheating. There’s no throttle stop and no pea-shooter-sized baffle that has to be removed. The bike not only runs as delivered, it runs really well.

HOW GOOD IS IT?
If you’re in the habit of wearing really good earplugs, you might not know the FE350S is anything but a pure dirt bike. It runs great without any modifications whatsoever. No joke. The bike starts, idles, and doesn’t cough or flame out at all. We can’t even say that about many unrestricted motocross bikes. The power rolls on smoothly from the very bottom without any of the herky-jerky response that’s common with fuel-injected bikes. The power delivery is sweet, and it revs to a million. Don’t get the wrong impression, though; the FE350S isn’t especially powerful. It revs really high, but there are no peaks or valleys along the way. It just keeps on spinning. In peak power, it’s a good 10 horsepower down compared to the motocross version. It’s decent, but if you compare it back to back with a full-blooded race bike, it will get eaten alive.

Whether or not that’s a deal breaker depends on who you are and where you ride. If you live in the mountains where you need smooth power for tight, rocky trails, you’ll love it. The motor is super smooth and, in fact, ideal for most off-road applications. If you ride tight, technical trails anywhere, same thing. The FE350S’s personality makes up for any shortcomings in peak output. If, however, you want to cover lots of miles on dirt roads, adventure bike-style, the 350 seems like a minibike. And, if you like to go hill-climbing, you’ll have to work a little harder than the guys on 450cc race bikes. It will, in the end, climb 99 percent of the same hills that a 450 can climb, but that 1-percent difference can be a bitter pill. 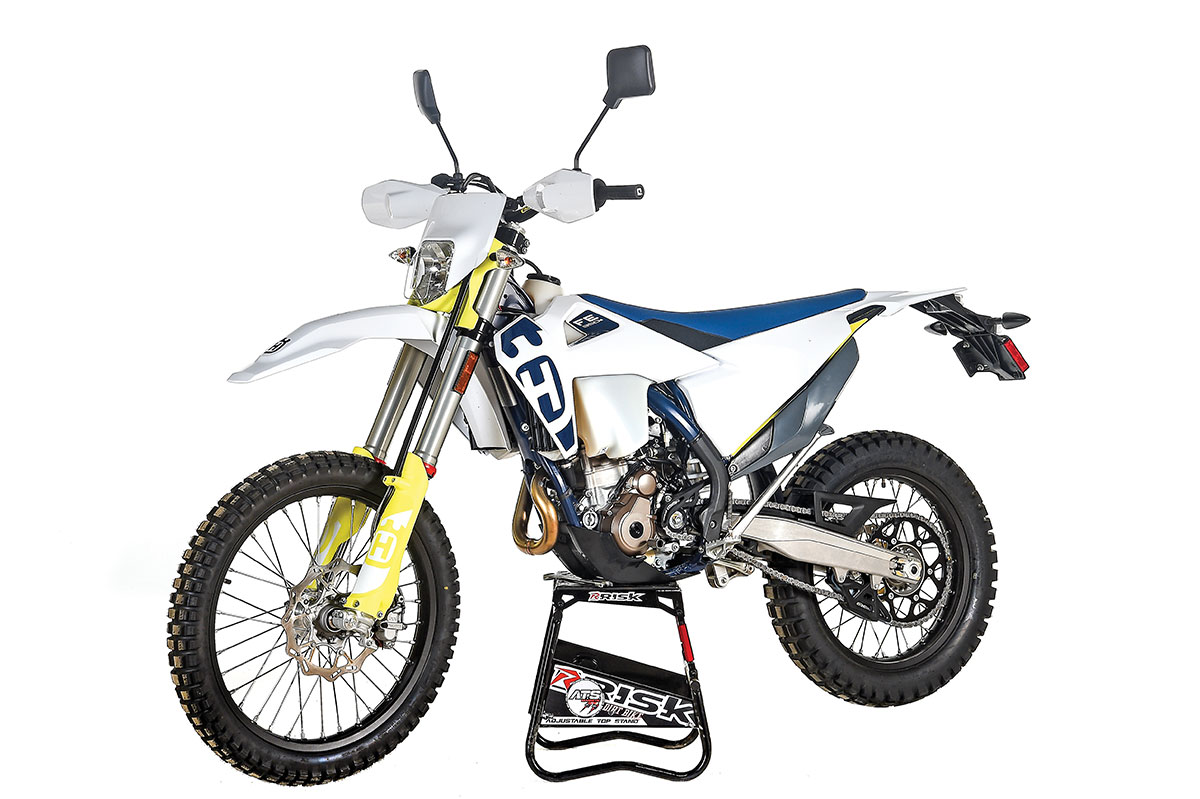 HANDLING IS LIKE A  BOX OF CHOCOLATES
Handling-wise, there is only one dead giveaway that the FE350S isn’t a full-time dirt bike—the tires. As noted, the Conti tires were chosen because they’re quiet, not because they have good grip in the dirt. If you plan to go on a real off-road ride, you have to install full-fledged knobbies. There are plenty of DOT-approved knobbies available, but you have to also install rim locks or you will spin off the valve stem almost immediately. Rim locks come with the bike, just not installed. The next step is to balance the wheels. You don’t notice in most off-road environments, but dirt bike wheels are usually horribly out of balance. When you ride on the road, you get dramatic wheel hop.

When you use knobbies on the road, DOT-approved or otherwise, there are some consequences you have to put up with. Most have decreased grip in turns. Some wander at high speed, and all have decreased lifespans. Like we said up front, those aren’t our priorities. Off-road handling is, and once you have good tires, the FE350S is outstanding. First of all, it’s among the lightest dual-sport bikes ever made. On our scale, without fuel but with two mirrors in place, the FE350S weighs 237 pounds. That’s awesome. For comparison, the Honda CRF450L dual-sport is 40 pounds heavier on the same scale, and even the Yamaha YZ450F motocross bike weighs a couple of pounds more. If you want a lighter dirt bike, you have to turn to something like the Husqvarna TX300 off-road two-stroke, which we just weighed at 228 pounds. Heck, even a Yamaha TW200 weighs 30 pounds more.

As much as anything, that’s why the Husky is such a great dirt bike. The light weight allows you to do things that dual-sport bikes traditionally can’t do. Want to ride an EnduroCross? Just take off the mirrors and go. The FE350 is, after all, the bike that was used as a basis for Colton Haaker’s 2019 Super Enduro championship bike. His was modified, but that’s not really relevant. Most riders would do better on a stocker. You can manhandle the bike with ease, and the smooth power delivery only makes it handle better.

We were a little concerned that the new frame wouldn’t work well for a dual-sport or trail bike. It’s much more rigid than the previous version, clearly designed with motocross in mind. But, the FE350 is still a fairly comfortable bike. The WP Xplor fork and shock are very soft. They make for a cushy ride at a casual pace. It might even be overkill. When you grab a handful of front brake, the fork dives excessively, and when you get into whoops, it’s easy to use up all the rear suspension travel. We get it. Husqvarna is aiming to make this bike a comfy cruiser, and Husky figures that more aggressive riders will find modifications to suit them.

If you want to take it to the next level, suspension changes will be number two on the to-do list after tires. As far as motor mods, make that a distant number three. If you really decide you want more power, you can go down that road, but be aware that this legally turns the bike into a closed-course competition machine. We’re sure that many riders will still opt to install an aftermarket muffler and perhaps remove the reed valve, but they should be aware that this will make the bike run poorly unless the EFI system is remapped as well—and that’s very difficult. Riders who do this generally replace the entire intake boot with the one from the motocross bike. On the KTM version (the 350EXC), that particular modification can’t be done. The KTM dual-sport has PDS suspension and a completely different airbox. The Husqvarna dual-sport, however, has linkage rear suspension and shares more parts with the motocross bike. You can keep most of the DOT equipment in place, even if you convert to dirt-only status. This is one of the first dual-sport test bikes that still has its blinkers after weeks of riding. Usually, those fall off immediately. The license-plate bracket is another story. The tire will tear it off in the first set of whoops.

SAVE UP
The Husky FE350S is a brilliant motorcycle, and Husqvarna knows it. The price is $11,099. This year Husqvarna dropped the 250 and the 450 dual-sport bikes, leaving only the 350 and 501. Not too many riders will miss the 250, which was a fun bike but disproportionately expensive. The 501 is great, but you have to be a fan of big-bores, which aren’t for everyone. That leaves the 350. When you look at the options, the FE350S might be the one bike that really can please both sides of the dual-sport world after all.

For a full buyer’s guide of 2020 dual-sport bike, click here.