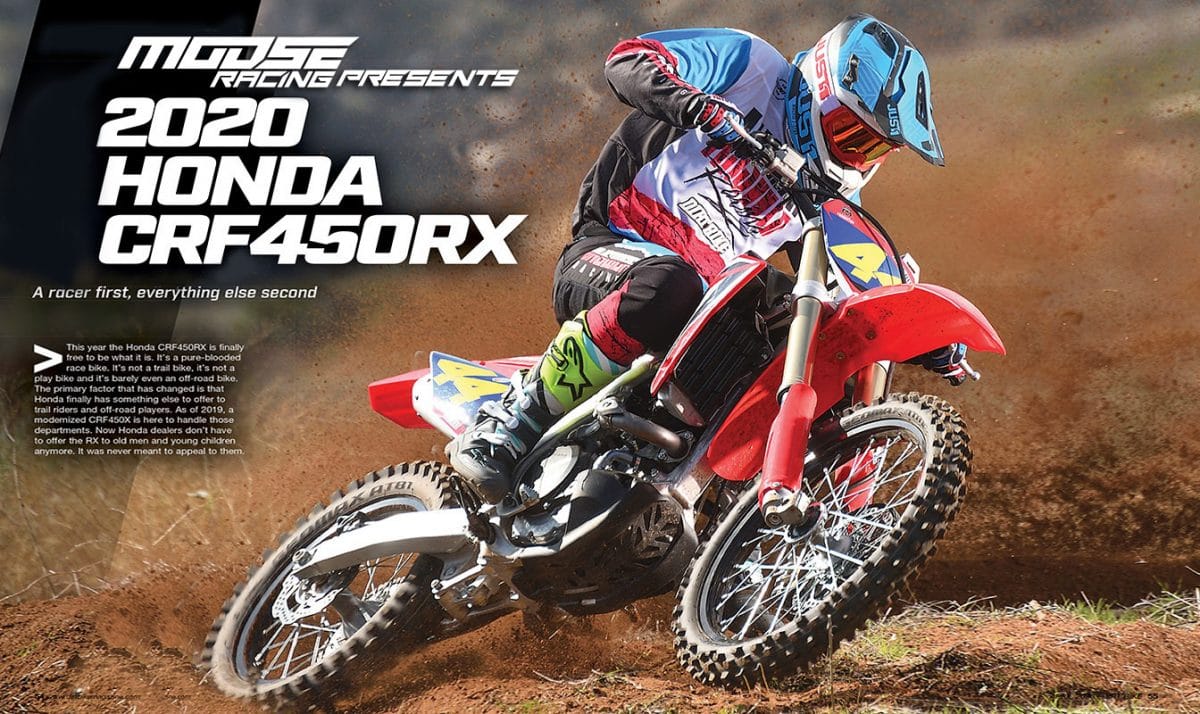 The 2020 Honda CRF450RX is not a trail bike, it’s not a play bike and it’s barely even an off-road bike. This is an off-road race bike, pure and simple.  If you want something for cruising the trails and fireroads, Honda has the 2020 CRF450X for you. It’s a very different bike, and you should know that up front.

HOW WE GOT HERE
The only hardware change for 2020 is the relocation of the battery box, 28mm lower. The overall layout of the bike is much the same as it’s been since it was introduced in 2017. It is powered by Honda’s Unicam single-overhead-cam motor, which uses a unique combination of rocker arms and finger-followers to operate the valves, in theory allowing the revs of a double-overhead-cam motor with less weight and complication. The EFI system uses a 46mm throttle body that is fed via a clever intake design that brings in air over the top shock mount, eliminating the usual twisty, turny route around the side of the shock. The shock and fork are Showa, with two coil-steel springs used up front.

HOLD ON TIGHT
The defining characteristic of the Honda 450RX is power—lots and lots of power. The CRF450R is already considered the brute of the motocross world. As an off-road bike, the RX is a little over the top, but in a fun, exciting way. In the standard map, it comes on strong down low with a throbby hit that just gets more and more frantic all the way up to a truly impressive peak. Even though the RX is toned down somewhat compared to the MX version, it’s still more powerful than almost any 450 on the market. When you put it in map three, it goes a little longer on top and has even more peak power. As you might imagine, this is a bike that loves wide-open places. Its first calling in the off-road world is western-style GPs like those in the National Grand Prix Championship series and WORCS. Those courses are extended motocross tracks with some tight technical sections mixed with high-speed straights. Stock gearing is fine for most of these, even though the bike has a motocross gearbox. There are one or two events where you might run taller gearing, but this varies from year to year.

In addition to the massive power output, the suspension is ideal for GP racing. The Showa fork and shock are a little softer than those of the motocross bike and well-tailored for medium-speed off-road terrain. Once again, the strengths of the motocross version are reflected here. Both bikes have an impressive ability to please a wide range of riders in terms of suspension action. The bike is balanced and stays up in its travel well, but still is capable of handling EnduroCross sections. Even big water-hole jumps and those kinds of western shenanigans are within the Honda’s comfort range. It takes a massive hit to bottom the front or rear, and even then, the impact is well-managed. 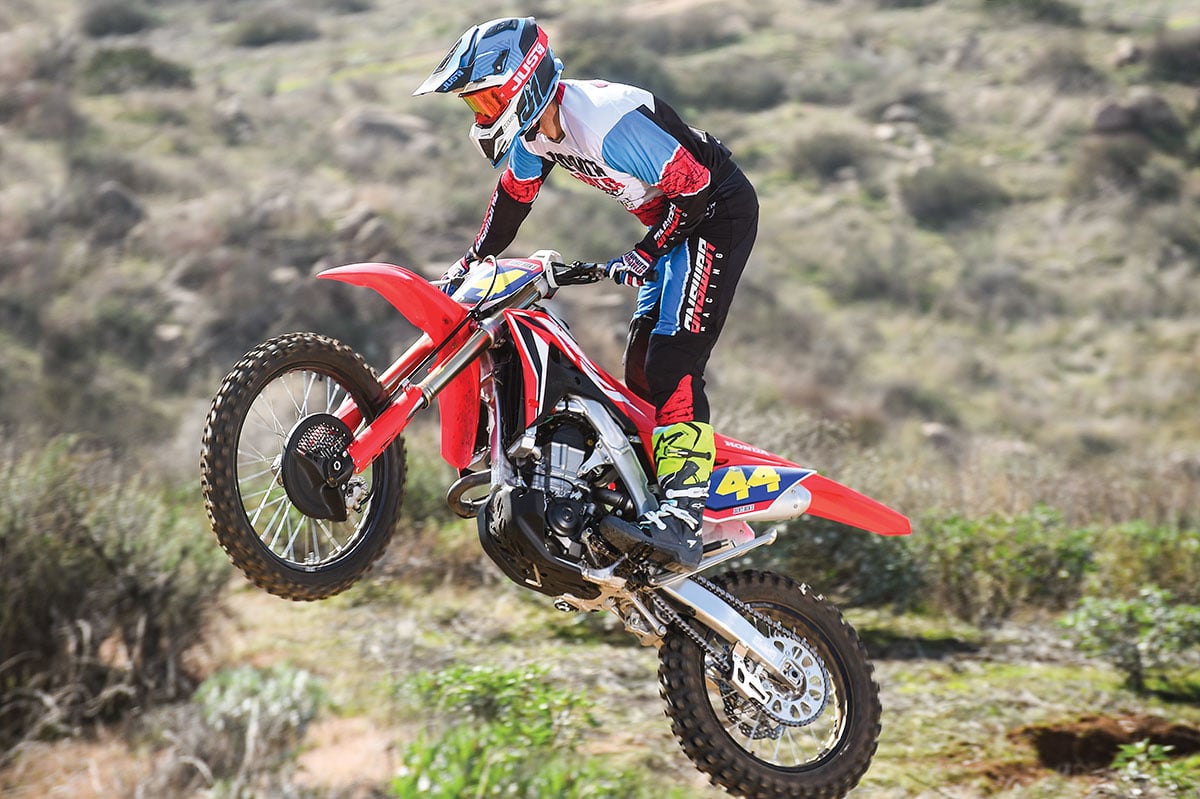 Number two on the list of places to take your RX is the open desert. The hitch here is that desert rides and races range from crazy, high-speed valleys to super-tight, rocky canyons. The Honda is awesome in fast sections. In the past, we’ve generally considered the bike to be a little nervous at speed, but we don’t necessarily feel that way anymore. This is probably because most other bikes have migrated to the Honda’s quick-steering ways rather than the Honda actually changing. We will say that anyone who plans on doing many desert races should invest in a steering stabilizer. This goes for all bikes, not just the Honda. It’s difficult to be competitive without one.

When the course goes into those tight third-loop canyons, the Honda’s magic fades. It’s a lot of motorcycle in rocks and on technical trails. Down low, the throbby power is hard to control, and the danger of stalling is ever present. Eventually, you try to manage the motor with the clutch more than the throttle. That gets tiresome. Changing to the mildest map isn’t especially useful here. It makes a noticeable difference in acceleration, but doesn’t make the low-end power any smoother. The same goes for HSTC traction control. This is an interesting concept and is much more noticeable than KTM’s system, but it doesn’t make the bike any easier to ride in tight stuff. The feature is most noticeable when the motor is under a sustained load, like a long, sandy hill. Then, you quite clearly feel the power output being metered out. The revs drop, and it feels like someone is dragging the brake. Frankly, it’s a little bit of a buzzkill when you go hill-climbing for fun, but it can also be a real benefit in deep sand. It takes at least part of the task of throttle management off your plate.

ALIEN ENVIRONMENTS
In eastern off-road races, the RX is out of place. Riders like Andrew DeLong have had good luck with the CRF450RX in GNCC racing, but he’s a top-level pro. For most riders the power is too much and the risk of stalling is too great. For trail riding, the RX is even more awkward. The slower and more technical the trail, the more clumsy the bike is. First gear is too tall, the power is too abrupt, the exhaust is too loud and the bike isn’t happy at all. It’s also a quick boil-over.

The radiator cap is a 1.1, which means it will start steaming if you run first gear or use the clutch for more than a few minutes. It’s clear that the bike was never intended for this type of riding. That brings us to the CRF450X again. That bike has none of these shortcomings for the trail. The two Hondas are complete opposites despite looking like near-identical twins. By being so responsible, the X allows its brother to be the wicked one.

The key is to know who you are and what you want beforehand. The CRF450RX is a very decisive machine that doesn’t compromise. Its rider should have the same attitude.