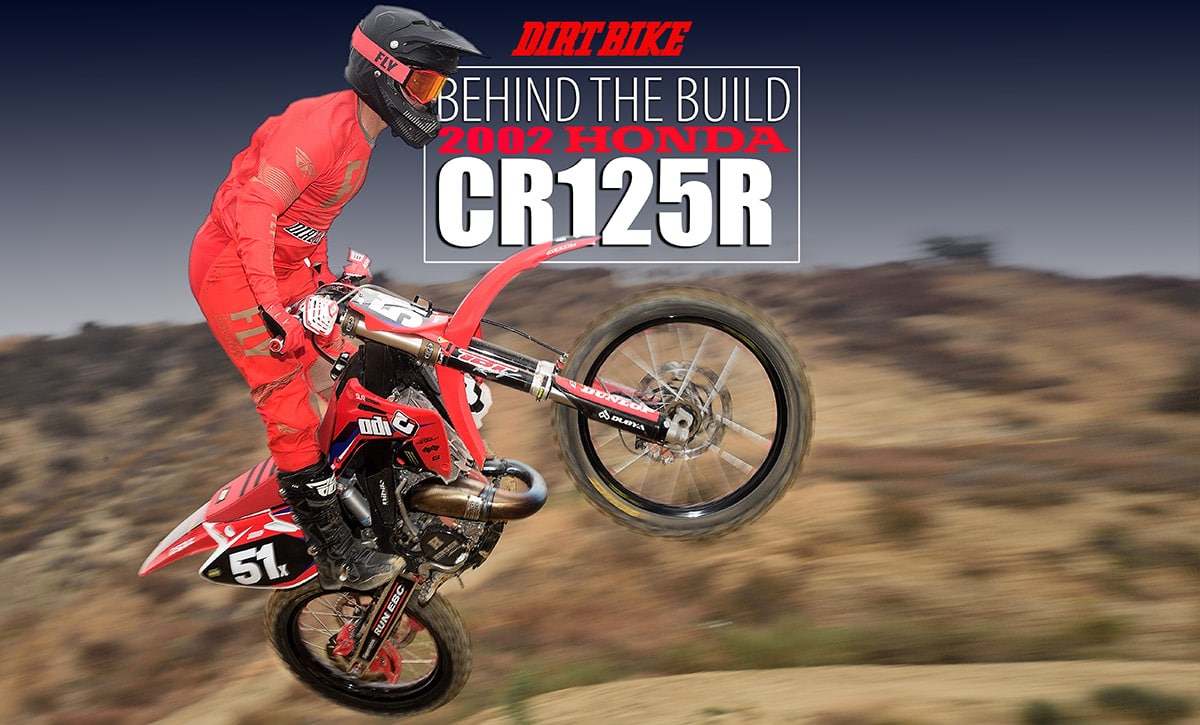 A father and son wrenching on motorcycles in the garage is something special. Johnny Jump now works at ODI Grips and has been in the motorcycle industry in one way or another for most of his adult life, so building a dirt bike was nothing new for him. However, rebuilding this 2002 Honda CR125, which was bought for $700 off Craigslist, was going to be different. His son, Kellon, was excited to get his hands dirty being a part of the entire process.

BONDING TIME
Although the CR125 looked clean on the outside, once the Jumps got it home, they realized it was going to be a lot more work than originally expected. The first clue was when Kellon started the bike and it locked up solid during warm-up. So, out came the engine, and the search for a Wrench Rabbit complete two-stroke rebuild kit started. Before the engine was torn apart, Dirt Bike magazine managing editor Mark Tilley vapor-blasted the entire thing in his Vapor Honing Technologies VH800 blasting cabinet. This was only done with the complete engine, because we knew the engine was going to be completely disassembled, cleaned internally and rebuilt. Doing it in this order allowed us to make sure there was no blast media inside the engine that could cause damage.

Once the engine was torn down, Johnny and Kellon found they not only had a lower-end issue with a seized crank bearing, but they were also dealing with a top-end problem. The piston came apart and damaged the cylinder right above the power valve. Brand-new CR125 cylinders are not available directly from Honda anymore, so we shipped our cylinder off to Millennium Technologies to be repaired. While the cylinder was being repaired at Millennium, the lower end was inspected and rebuilt with a new complete crank, main bearings and gaskets from a Wrench Rabbit kit by Brad at Parapros. A complete Hinson Racing Billetproof clutch system and cover replaced the blown-out OEM Honda unit. The engine build was topped off with a few aftermarket items from Boyesen, Pro Circuit and a complete hardware kit from Bolt Motorcycle Hardware.

With the engine under control, the Jumps focused on cleaning up the chassis. The main frame was scrubbed with Scotch-Brite pads, using lots of elbow grease applied by both Johnny and Kellon. Once the frame was cleaned and inspected, they both decided it needed to be black, so it was off to powdercoating. This was the easiest part of the build. Upon closer inspection, Johnny realized both the suspension linkage and braking systems needed attention. Both were rebuilt internally with kits from ProX and then vapor-blasted, making them look brand new. The Jumps’ CR125 suspension was in need of some serious TLC, and once Mike Schmidt at TBT Suspension got his hands on them, both the fork and shock got a full rebuild. While the suspension was apart, TBT also re-valved both ends internally to work for Kellon and Johnny to ride Grand Prix and motocross-style events.

With older two-stroke builds, one area that always needs attention are the wheels. This 2002 CR125 had seen some hard times, so the Jumps turned to another motorcycle industry family, the Andersons. Kristen and John run Dubya USA, which offers new complete wheels or a restoration service for older-model motorcycles. For this project, the decision was made to go with Dubya’s rebuild option. This service included a Cerakote finish on the OEM hubs, new stainless steel spokes, nipples, black Excel rims and new bearings. New brake rotors from EBC were bolted on the rebuilt wheels, along with an aluminum sprocket from Supersprox and Dunlop MX33 tires. A TM Designworks rear chainguide, swingarm sliders, rear rotor guard and rear brake caliper guard were installed, replacing the worn-out stock pieces and adding some much-needed durability and style with their red color. The last upgrade to the chassis included a set of CNC-machined, billet-aluminum triple clamps from Emig Racing that would mount the all-new RC4-bend ODI bars featuring Controlled Flex Technology (CFT).

FAMILY FUN
Initial testing of this build put a smile on everyone’s faces. It’s kind of hard to compare performance gains directly to a stock 2002 Honda CR125 for obvious reasons, but, man, was it fun to ride. Surprisingly, the 2002s are still very competitive against modern 125cc two-strokes on the market. This only fuels our passion for Honda and other Japanese manufacturers to fire up their assembly lines and start making two-strokes again. Admittedly, we go overboard with builds that appear in the magazine, but the average guy can still buy an older 125cc two-stroke and invest a little time and money into it while still spending less than half the money it would take to buy a new one. We hope that there are thousands of projects just like the Jump family’s CR125 going on across the United States right now. This not only introduces a whole new generation to dirt bikes, it also gets families spending time together while teaching great life lessons. Don’t forget the old saying, “The family who plays together stays together!”