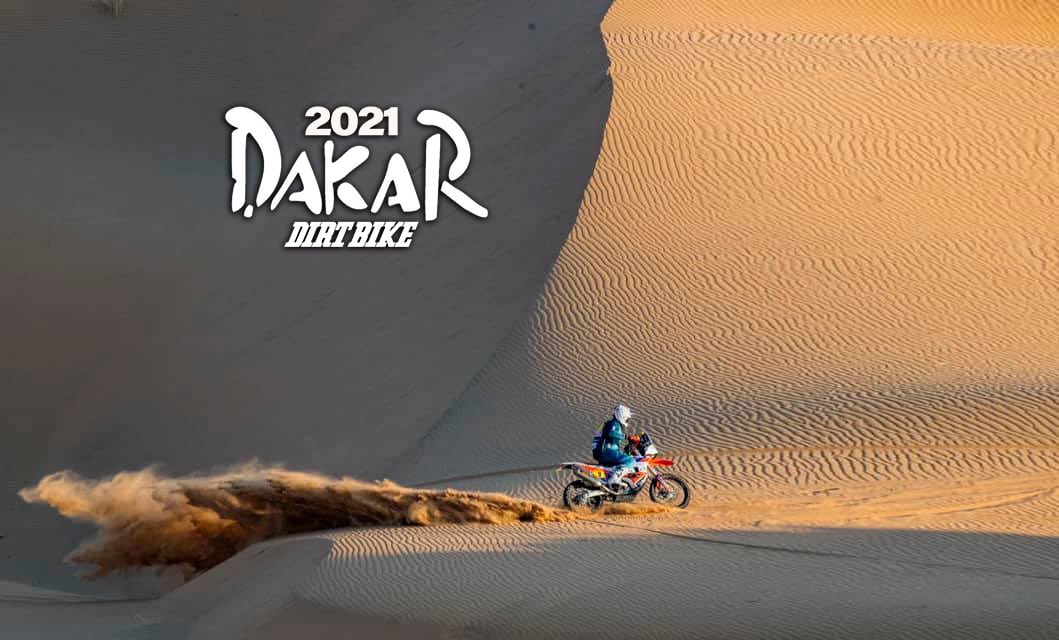 The up and down nature of the 2021 Dakar rally played out once again on Stage 3. After finishing up front in Stage 2, the Honda teammates of Joan Barreda and Ricky Brabec had to lead out again and suffered the consequences. While they struggled with navigation, America Skyler Howes of the South American BAS KTM team started in the prime location, 11th off the line. He ended up in fourth, which was enough to take the overall lead. Toby Price was the winner of the stage. He was able to follow tracks most of the day after his disastrous stage two, which resulted in a 28th place start. That was also true of Brabec’s HRC teammate Kevin Benavides, who finished second after starting 24th. He now sits in second overall, 33 seconds behind Howes. In the meantime, Brabec drops back to 13th in the standings after finishing 25th, some 21 minutes behind the leader.

Howes: “Was a good day today! Found the flow early on in the dunes and when things opened up I felt right at home. The sandy tracks through the canyons and the rocky passes were really fun and I was just having a good time! Caught up to a handful of guys in front of me and had an all out battle to the finish! Honestly … I’m just having a lot of fun and I’m feeling comfortable on the bike. I’ll take every day as it comes and tackle each challenge as best as I can. After all, just a dude from Utah riding a dirt bike in Saudi Arabia, gotta have fun with it!”

Brabec: “You know the results are out of control. It’s like a rubber band effect. It’s flip-flop, either out or in. It’s really difficult – not really frustrating. We can’t figure out how to get back into the swing of it. We need to finish in the top ten and it’s really hard to find that rhythm and find that speed. We can’t seem to find how to finish around seventh position to sit there and watch everything unfold. The Hondas and Toby have opened every stage so far. It’s been pretty difficult so far, but we just need to find a new strategy. We’ll try and see if we can do something different tomorrow and try and finish in the top ten. The situation that Joan and I are in is tough. We are at the back and they are at the front. We’re at the opposite ends of the spectrum. We need to get the group together, but the navigation is slow in some areas and fast in others. The roadbook, the results, the standings have all been a roller-coaster. Everything so far has been up and down. We are 12 minutes off the lead. We can make it up in one day, especially starting from the back tomorrow. It’s only day three. We are going to do our best.”

Toby Price: “Everything went well today – no crashes, the bike has been good, and I was able to find a good rhythm. It’s great to win another stage, but it’s a bit like a yoyo at the moment – it’s difficult to lead a stage out from the front as you can lose a lot of time, and then you have to push hard the next day to make it all up again. Hopefully one day we’ll catch a bit of a break, the navigation won’t be too tough, and I can stretch things out from the front. Right now, every day is crucial, and I think if it carries on like this, with everyone staying fit and their bikes working good, the battle for the win is going to go down to the very last day.”