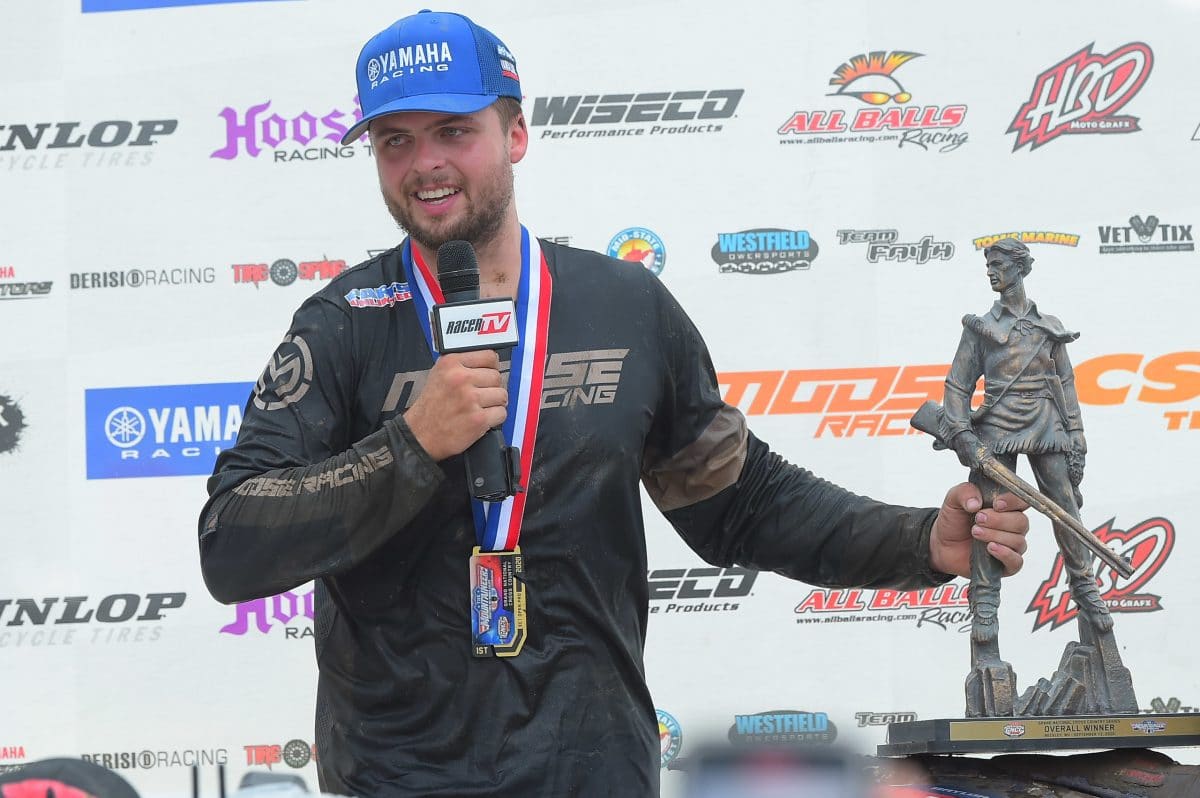 The Grand National Cross Country (GNCC) Series presented by Specialized, an AMA National Championship, continued Sunday, September 13, as the motorcycles took to the woods of West Virginia. Round 9, the Rocky Mountain ATV/MC Mountaineer, took place at Summit Bechtel Reserve in Beckley, WV. Cloudy conditions made for a great weekend of racing, even with some showers taking place on Sunday afternoon’s Pro race.

In the XC1 Open Pro class it was FMF/KTM Factory Racing’s Kailub Russell racing off the line first to grab the $250 All Balls Racing XC1 Holeshot award. However, as the pack of riders headed into the woods, Russell would make a mistake and be forced to fight through the pack of riders early in the race. Russell’s teammate, FMF/KTM Factory Racing’s Ben Kelley would capitalize and move into the lead for the opening lap.

Making his return to racing aboard a new team for the event was AmPro Yamaha’s Steward Baylor Jr. As the lead pack of racers came through timing and scoring on lap one, Baylor found himself sitting 5.5 seconds behind Kelley. Throughout the course of lap two, Kelley and Baylor would engage in a battle with Baylor taking over the top spot as they came through just 1.9 seconds apart. Russell had made his way into the number three spot, but found himself 53 second behind the lead duo.

As the race wore on Baylor Jr. would put his head down and push to put a sizeable gap between himself and Kelley. With the fans cheering him on throughout all six laps, Baylor Jr. would come through to take his first overall win of the season with over a minute lead. Kelley, who tangled with some lappers, would manage to hold onto second overall with Russell rounding out the top three overall at this year’s Mountaineer GNCC.

FactoryONE Sherco’s Grant Baylor steadily moved up through the pack after a seventh place start to the day. Baylor found himself running in the third place position at the halfway point in the race, but would be unable to hold off a charging Russell. As the checkered flag flew Baylor would check-in with a fourth overall on the day.

Babbitt’s Online/Monster Energy/Kawasaki’s Jordan Ashburn found himself sitting just outside the top five as the race began. Ashburn would put his head down and push making the pass for fifth on lap two, however, he would soon find himself back in sixth. As the white flag flew Ashburn knew he only had one more lap to make the pass stick, and he would do just that crossing the finish line fifth overall.

After missing the last two rounds before GNCC’s summer break, AmPro Yamaha’s Layne Michael made his return to racing in his home state of West Virginia. Michael had a mid-pack start to the day, but would work his way up to fourth for the second and third laps. Michael put up quite a fight for a top five finishing position, only missing out by 20 seconds behind Ashburn.

Phoenix Honda Racing’s Andrew Delong had a great start, and as he came through timing and scoring he would find himself fourth overall. However, as Delong made his way through the second lap and then third laps he would have to take make a long pit stop. Delong’s team worked feverishly to fix the mechanical issue with his bike, and he would head back out into the race still running in that eighth place position. By the time the checkered flag flew Delong had worked his way to seventh in the XC1 Open Pro class.

In the XC2 250 Pro class it was Trail Jesters KTM’s Jonathan Girroir taking his fourth class win of the season. Girroir was off to a great start and would come through on the opening lap in the first place position. Girroir would find himself up into the third overall position based off of his adjusted time. However, as the race worse on Girroir found a good flow and did not want to make a mistake to jeopardize his XC2 class win. Girroir would come through to take the win with a 13 second gap back to second place.

Tely Energy Racing/KTM’s Liam Draper made his way onto the XC2 class podium with a second place finish in West Virginia. Draper had started off his day running in the fourth place position, but would steadily work his way through the pack. When the white flag came out, Draper would make a last lap charge to ensure his second place finish.

Rounding out the XC2 top three finishers was AmPro Yamaha/St. Lawrence Radiology’s Mike Witkowski. Witkowski would have his work cut out for himself throughout the race, as he would find himself back in the fifth place position at one point in the race. Witkowski found himself third as the white flag was flying, and he would hold onto that position until the checkered flag flew.

Raines Riding University/Fly Racing/Yamaha’s Jason Raines would battle throughout the duration of the race with Moose Racing/Carolina KTM/XC Gear’s Zack Hayes for the FMF XC3 125cc Pro-Am class win. Raines and Hayes would swap the lead position multiple times throughout the three-hour race; however it would be Raines making a last lap pass to take the win. Hayes would finish out the day with a second in the class, with FXR/KTM’s Jason Lipscomb making his way up to third in the class.

AmPro Yamaha’s Rachael Archer battled throughout the 10 a.m. race to take her second WXC class win of the season. Archer made her way into the lead position early in the race, but would face a battle with Beta USA’s Rachel Gutish on the second lap of racing. Gutish, who grabbed the $100 Trail Jesters WXC Holeshot award, was eager to battle at the front of the pack. Archer would make the pass back around Gutish to retake the lead as the white flag came out. When the checkered flag flew after four laps of racing, Archer would cross the finish line a minute ahead of her competition. Gutish would come through to hold onto second place at round nine. BABS Racing Yamaha/Maxxis’ Becca Sheets maintained her third place position throughout the duration of the two-hour race. Sheets remains in the WXC points lead after nine rounds of racing are complete.