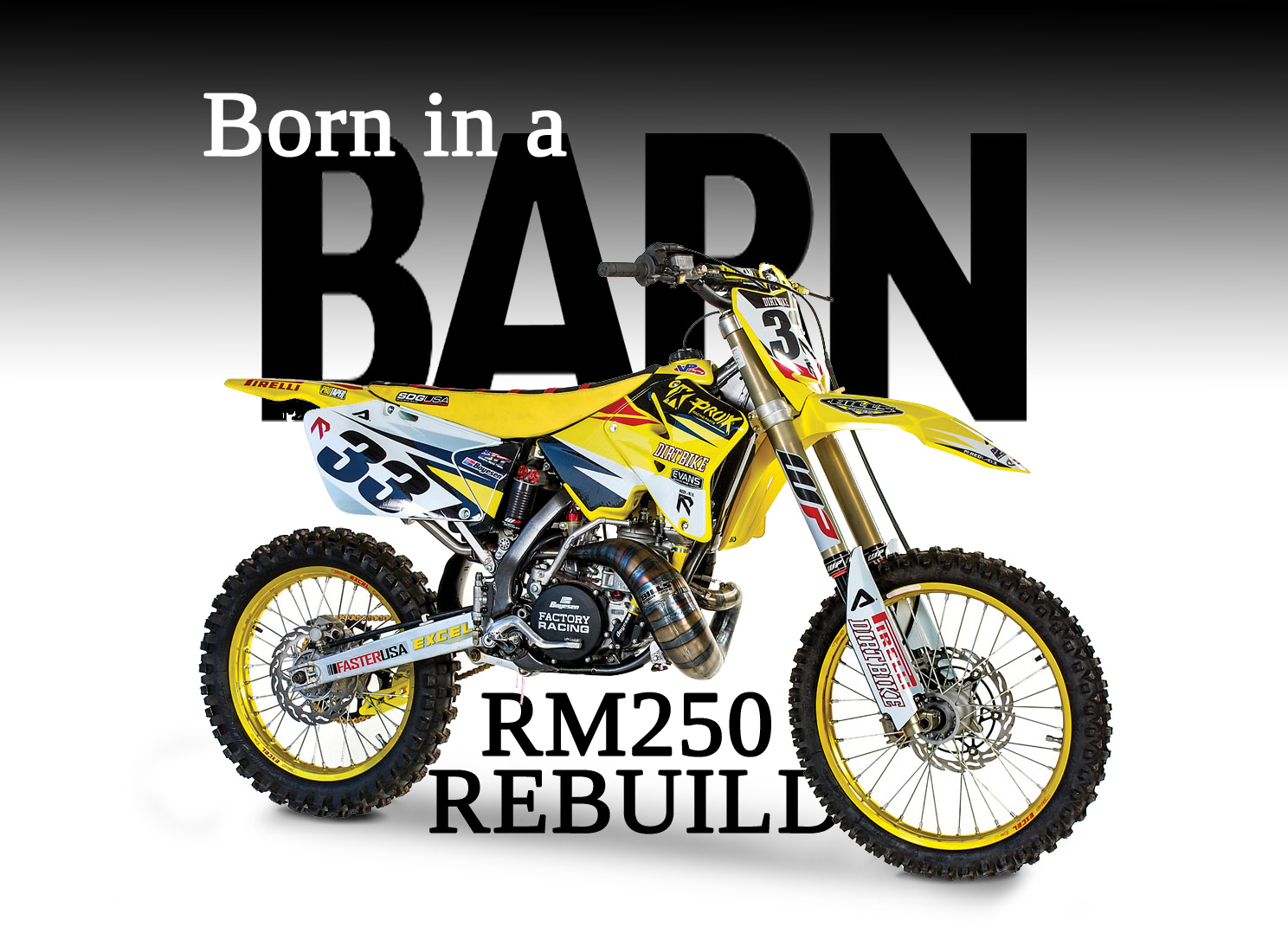 Back in January of 2003 the U.S. rounds of the THQ World Supercross series kicked off with Honda CR250R-mounted defending champion Ricky Carmichael ready to take on all challengers. However, the King of Supercross dropped a bomb on the motocross world by announcing his retirement from full-time racing days before the season opener. Reading like a who’s who of motocross history, Suzuki-supported riders like Pastrana, Tortelli, Roncada and Hamblin—and that’s just in the 250cc class alone—tried to step up into that top spot. This is where our inspiration for a 2003 RM250 rebuild came from. So, with the smell of premix and race gas burnt into our brains, we started spinning wrenches. 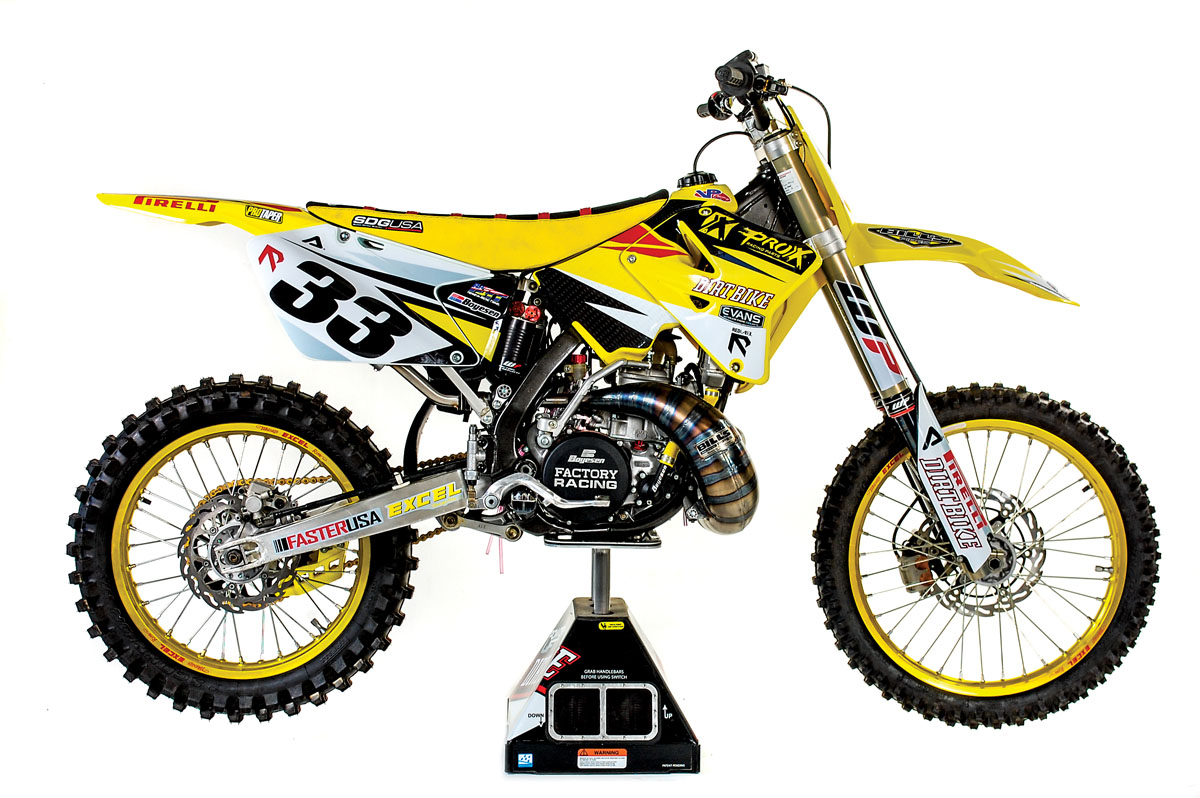 BUILDING OLD YELLOW
The best part about going back and rebuilding a 14-year-old motorcycle is the power of imagination. With this build, we decided to add a modern-day twist with an old-school look. When starting a build like this, there are a few necessities one must possess. Patience is the most important, as these builds are time-consuming and never go as planned, as well as be flexible, willing to change directions at any time and have a replacement bolt kit from Specbolt or Tusk Racing, because they are lifesavers.
Unlike most rebuilds, our RM250 was actually intact and in semi-working condition. We eventually found out that doesn’t always mean it’s going to make it any easier. After a complete tear-down, we got to see what really needed to be done, and trust us when we say it almost stopped there. The bike was held together with mismatched hardware, JB Weld and a ton of what looked to be superglue. The complete engine was shipped to Matt at L.A. Sleeve, and while he was disassembling it, he found all types of surprises. 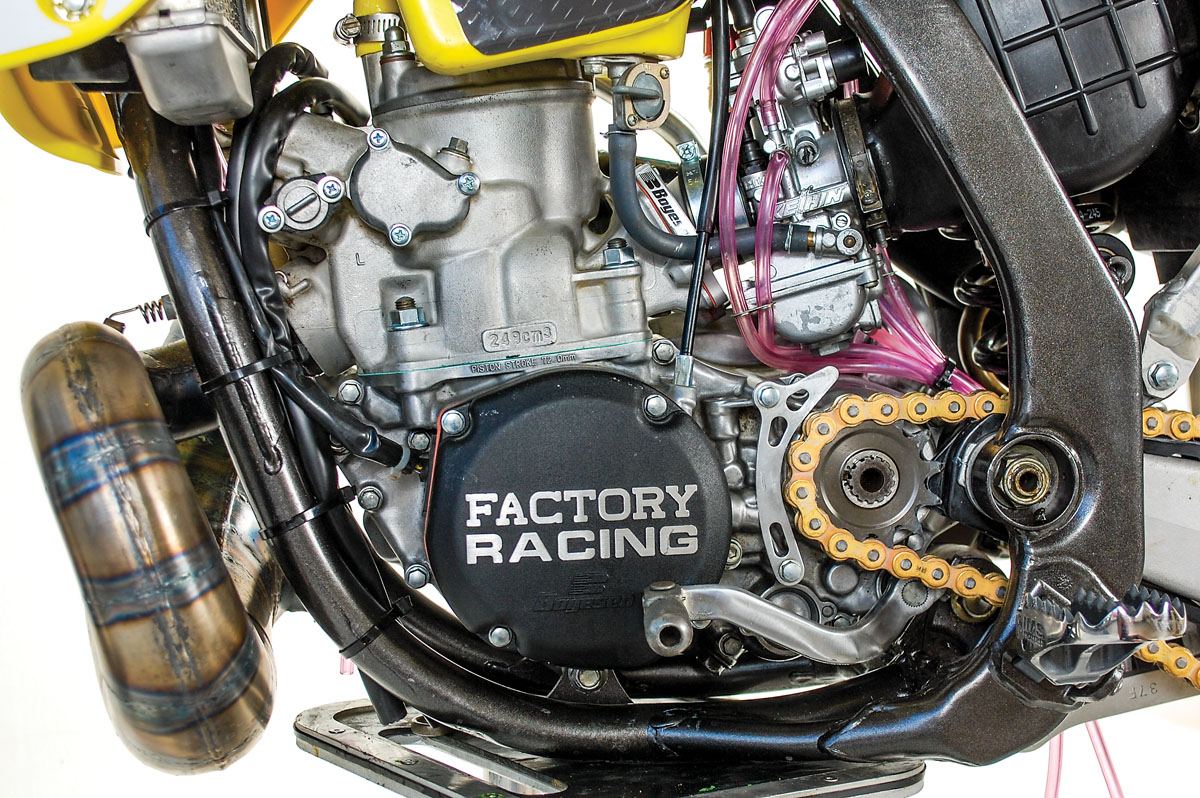 Bottom line: the top and bottom ends of the engine needed some TLC. On a good note, the transmission looked okay, minus the clutch, which was hammered. The crank was rebuilt in-house using a ProX OEM replacement rod kit. The coating inside the cylinder was half gone, so it was fixed with an L.A. Sleeve cylinder rebuild kit. Each kit contains a sleeve, LAPC piston with rings, clips and wrist pin, along with a new wrist-pin bearing and top-end gasket kit. As we mentioned, the clutch needed some attention, so we replaced it with a ProX basket, inner hub and clutch-plate kit that also includes springs.
With all the major engine work completed at L.A. Sleeve, we decided to include some aftermarket parts from Boyesen. The ignition and clutch cover gave the RM a cool factory look, while the Supercooler increased coolant flow, and the Rad Valve intake would help overall engine performance. 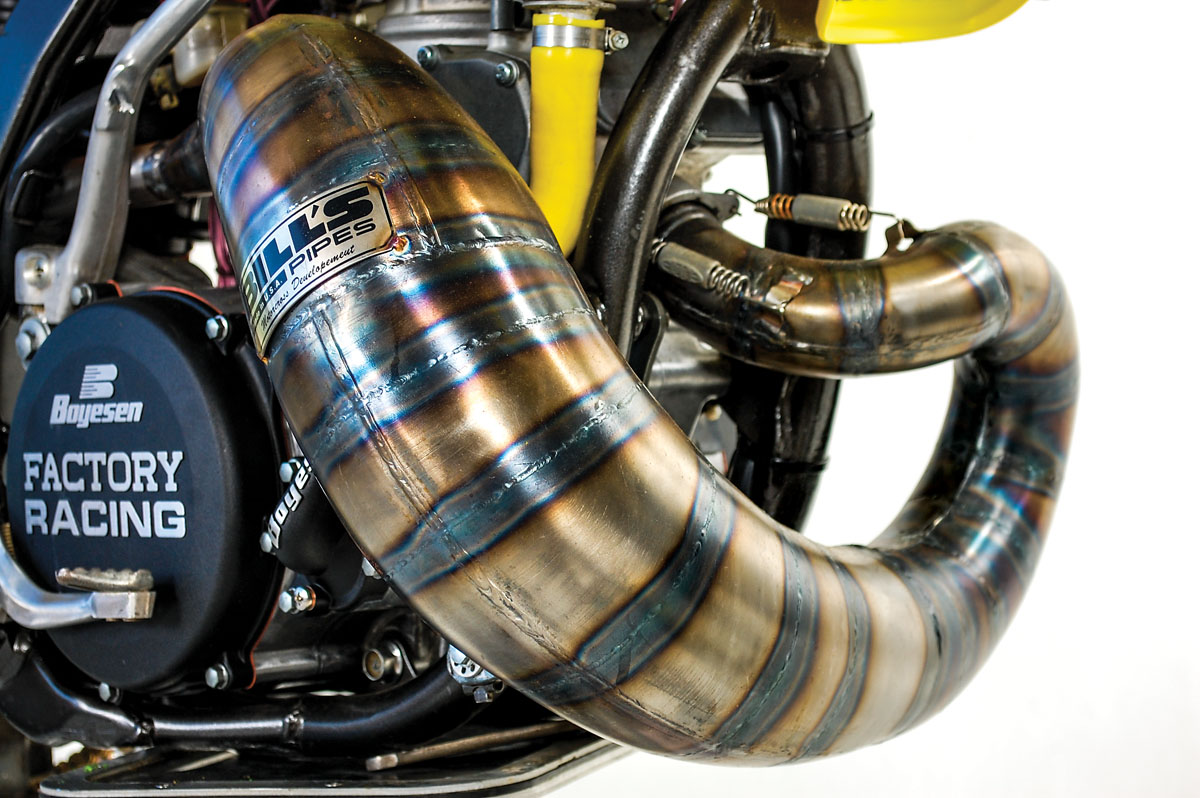 Pepping up the engine performance would be a Bill’s Pipes exhaust system, and we added some cool factory bling with a cone-look finish on the expansion chamber. This is a service that can be added to any Bill’s Works two-stroke pipes at the time of purchase for an extra cost of $125. The Keihin carburetor was rebuilt using a kit from All Balls. The kit included everything needed to return the setting back to OEM specifications.
Once the chassis was exposed, just like the engine it needed a lot of work. Every bearing on the frame, linkage and swingarm was replaced using All Balls’ kit. Some of the old bearings were so rusted that they had to be heated and beat out with a punch. Some even required Dremel-tool attention and expert mechanic skills. It’s amazing what a little maintenance and some grease could have prevented.
Suspension was another interesting area on this build. We thought the engine and chassis were bad, but the suspension was worse! It was so bad that it couldn’t be saved. It was either hunt something down on eBay or go to the dealership and throw down loads of cash. 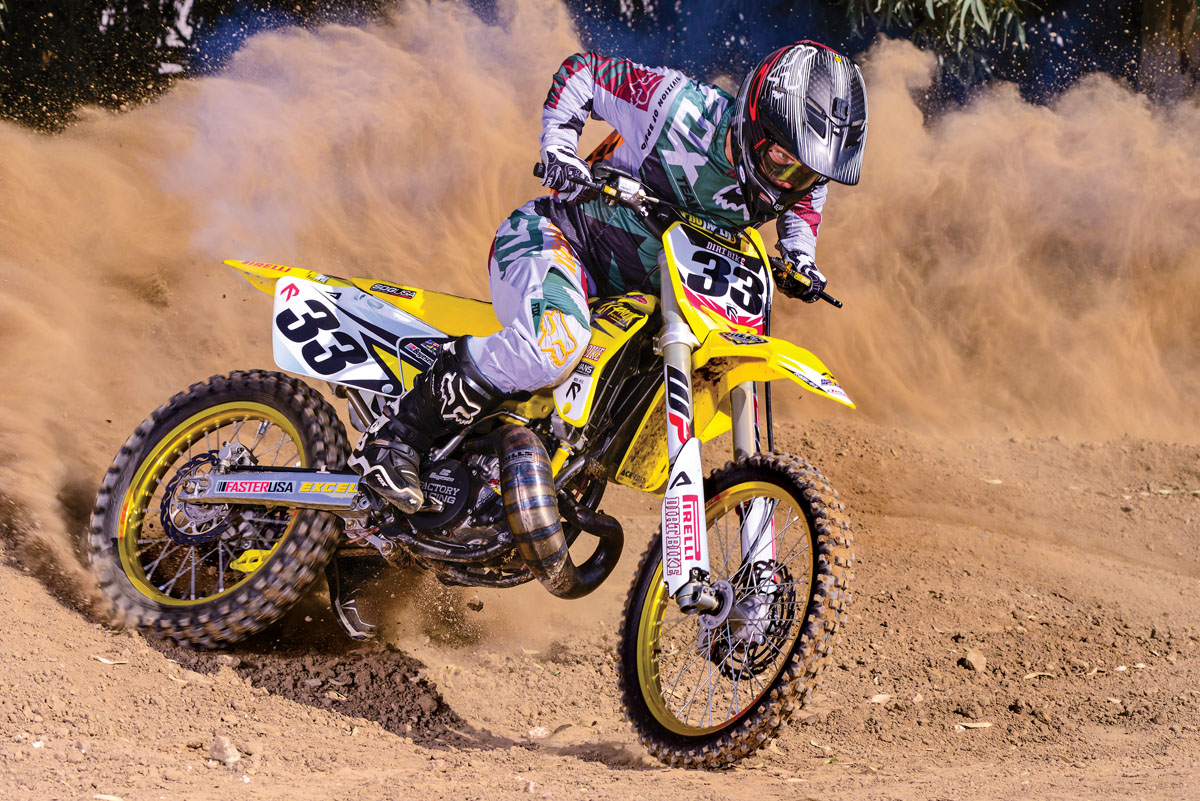 Last year WP North America introduced the Cone Valve fork and Trax shock kits for newer Japanese motorcycles, so we decided to give them a call. The Dirt Candy Suzuki team actually ran WP suspension components on their bikes all last year. Turns out that call would change our direction of the overall build. With the use of newer 450 triple clamps, we were able to bolt on an entire front-end. The forks slide right in the clamps. We just had to run the front wheel with spacers off a newer 250/450, along with a complete front-brake system off a newer bike that we added an oversized Moto Master rotor kit to. The Trax shock would require some modifications, making it shorter than the WP, but then would bolt up to a stock 2003 Suzuki RM250 linkage.
With all the major work finished, we focused on the look. Sean Hamblin was a local SoCal kid with tons of talent that had scored a factory Suzuki ride as a fill-in rider and proved himself worthy of a full-time ride. He actually ran #33 in 2003, but we liked the look of the 2004 factory bikes better, so we morphed the two together with the help of Red Label Graphics. 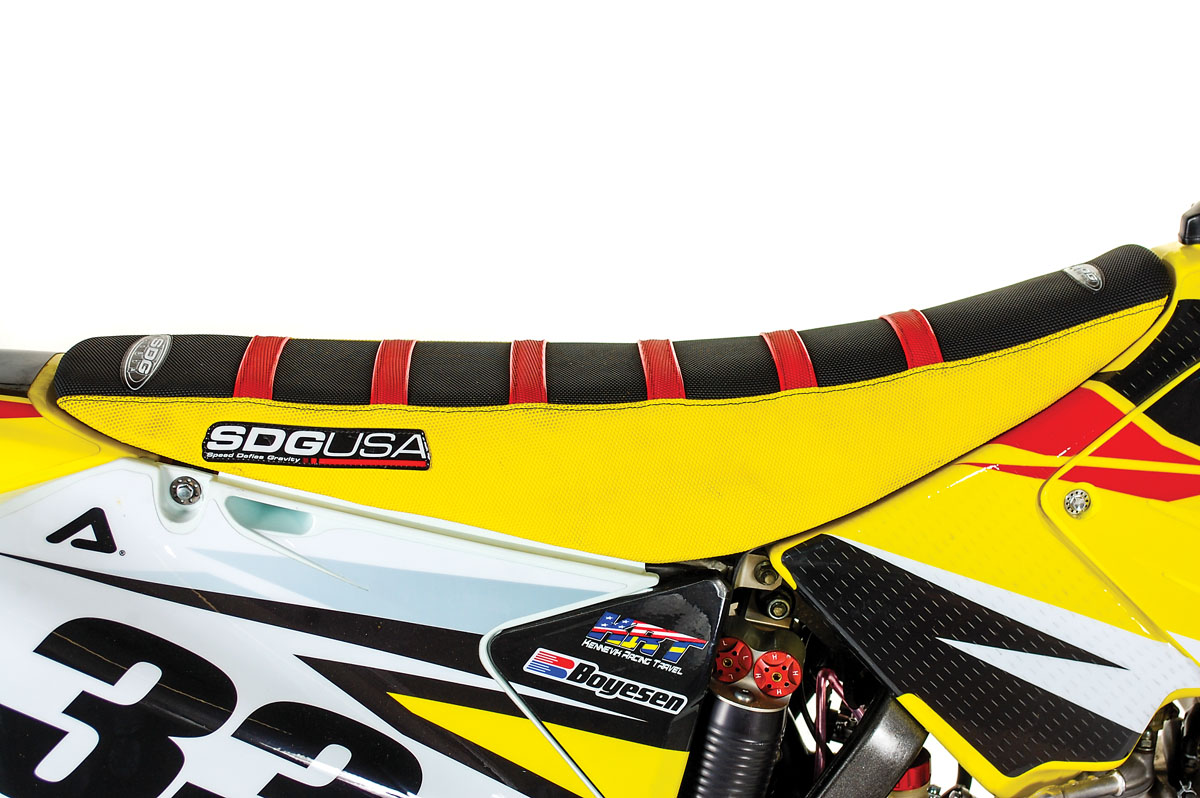 The hubs are actually stock. Faster USA cleaned them up, replaced the bearings and laced up a set of Excel gold rims to top off the factory look. This is a service they offer to everyone for about half the cost of a new wheelset. Bling without a huge price tag? Now that’s our kind of deal. Instead of going with an all-black seat like the factory bikes, Jeff over at SDG added some color with a yellow, black and red custom gripper design. 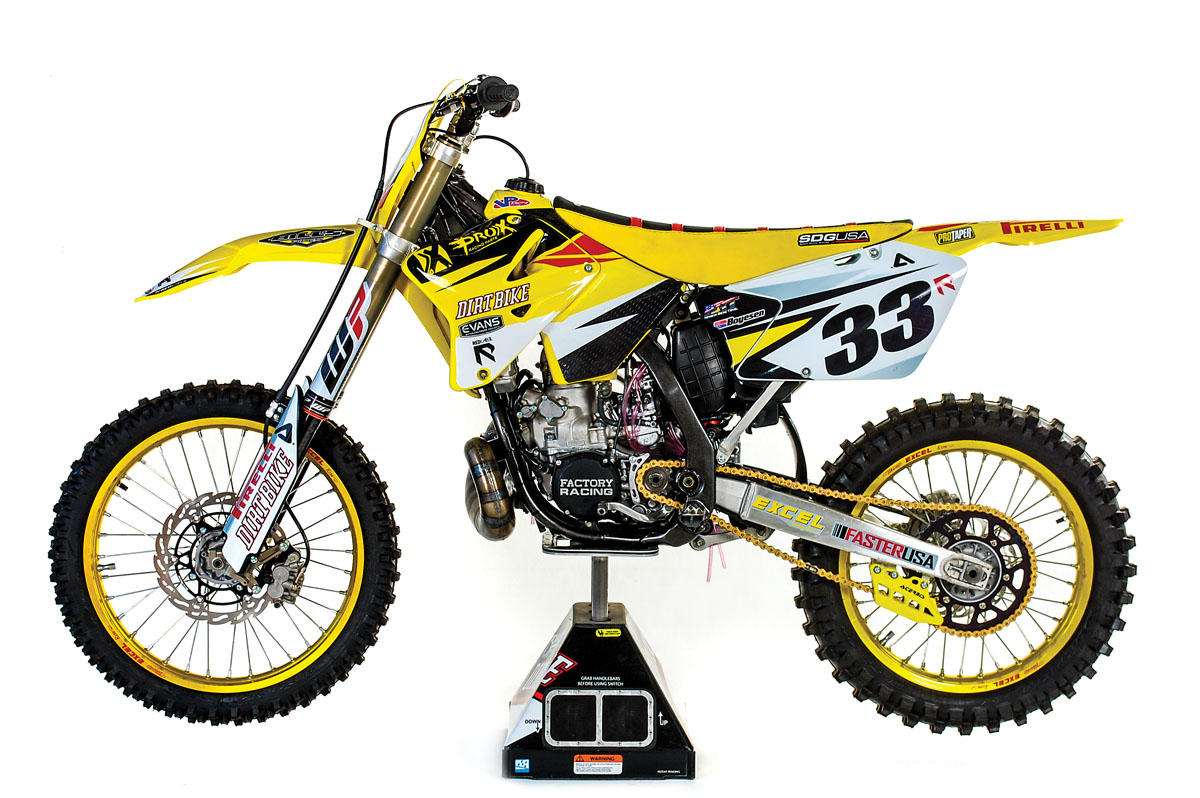 GOOD AS NEW?
You know what we said in the beginning about patience? On some builds, just when you think all the work is done, it has only just begun! This is one of those builds. Once the bike was completed, we started the process of getting the jetting dialed in. On older bikes this can be very tricky, and our RM250 proved to be just that. After hours of different combinations that at times bordered on downright insanity, the entire staff were scratching their heads in confusion. So what does any good motohead do? Steal the carb of his buddy’s perfectly running RM250 when he is at work of course. With a couple of minor adjustments, it worked great.
Sometimes, no matter how many times you rebuild it, things just wear out and need to be replaced, and that was definitely true in this case. Once officially completed with a new carb, our RM250 was a blast to ride and turned heads everywhere it went. Besides the time spent wrenching with buddies and a sense of accomplishment when it’s all done, the best part about builds like this one is having that feeling of looking forward to the weekend and the chance to ride! Time to find a new project.