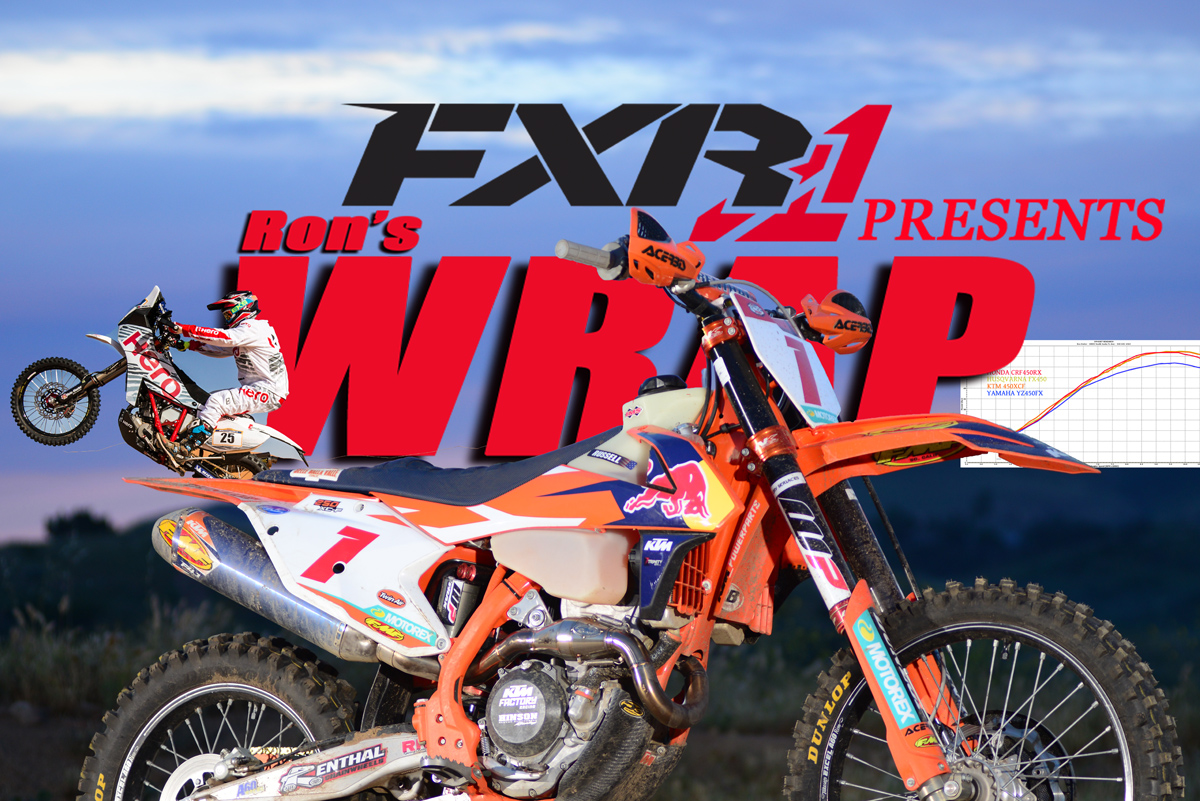 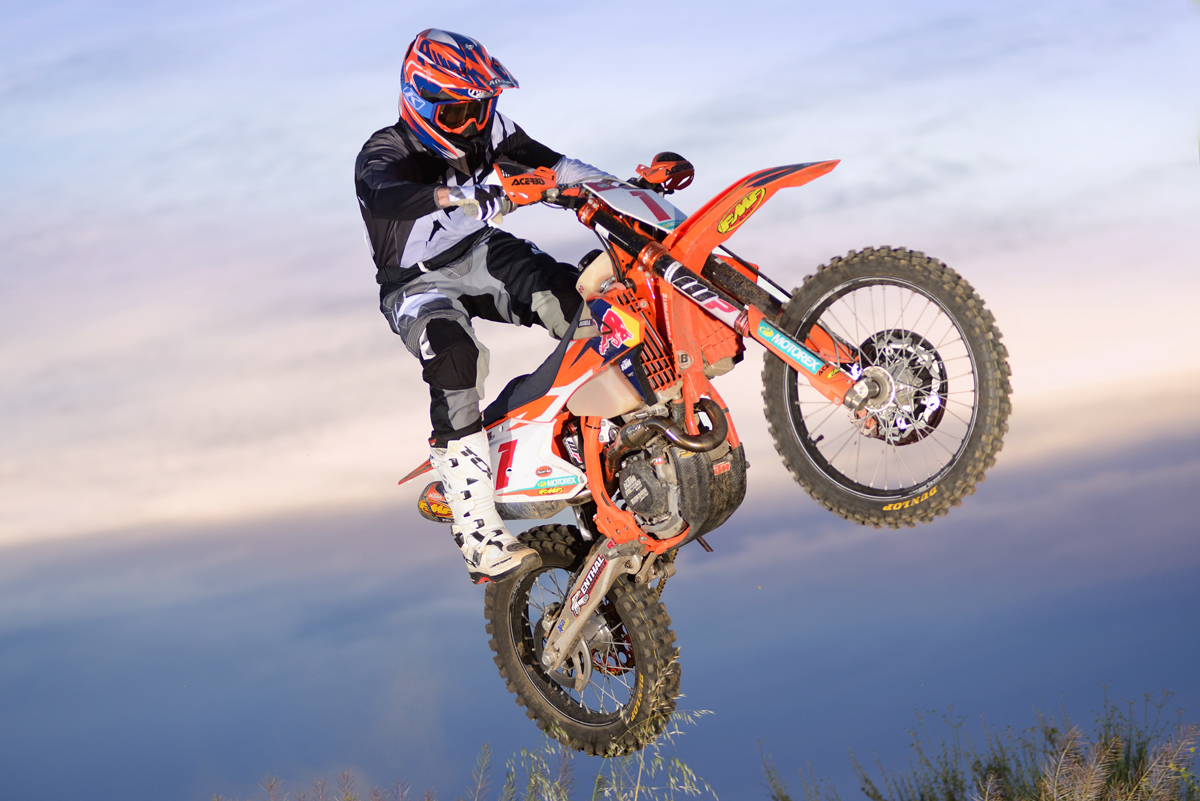 We’ve been on a mission to track down off-road bikes that have a number one, and this week we got our mitts on Kailub Russell’s KTM 250XCF.  In past seasons, Kailub has been racing the 350XCF, but this year he’s riding the 250 as well. The KTM bosses want him to choose one or the other because they don’t want to prepare two different bikes all season, and it looks like he’s going to stick with the 250, even though he rides against 450s in the XC1 class. That’s pretty wild, because he’s actually getting good starts. 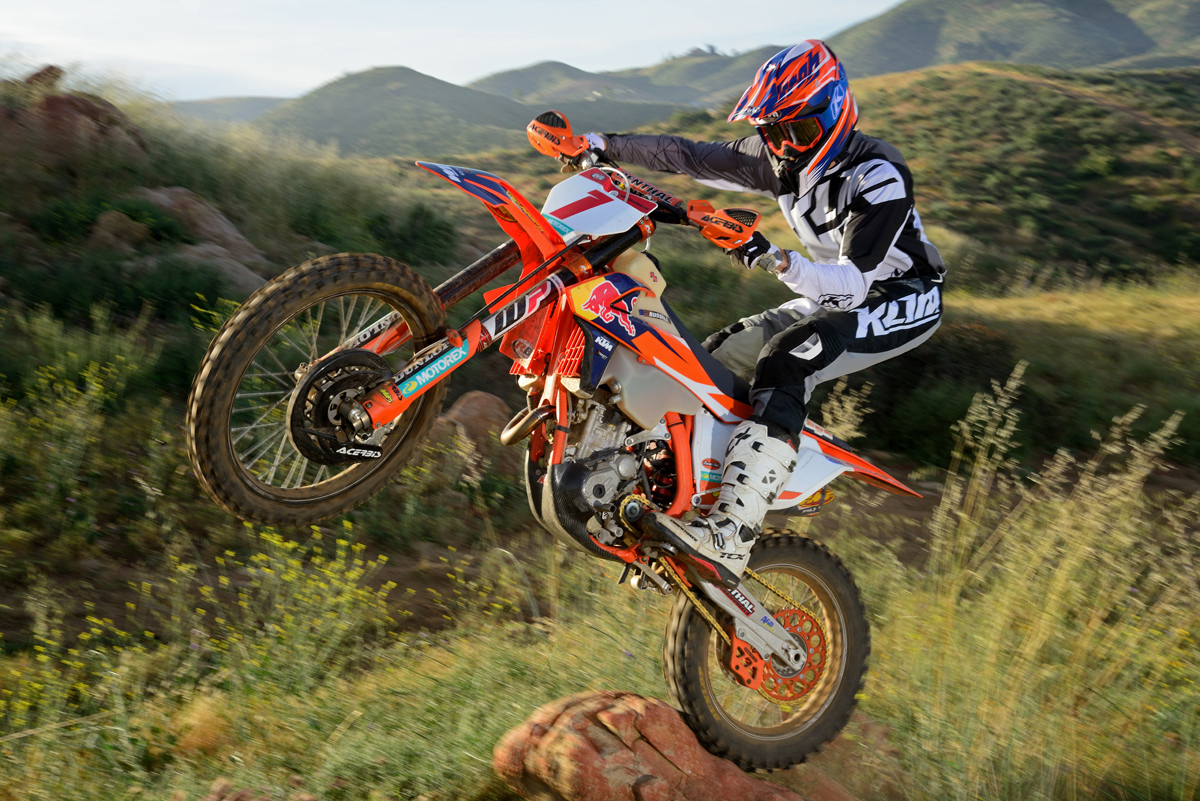 This particular bike is on the west coast right now and was just assembled for later in the year. It looks almost identical to the 350, but if you’re familiar with KTMs, you know how to tell them apart. Lots of people have tried to sneak 350s into the 250 class over the years, but this is one of the only times that it’s gone the other way around. 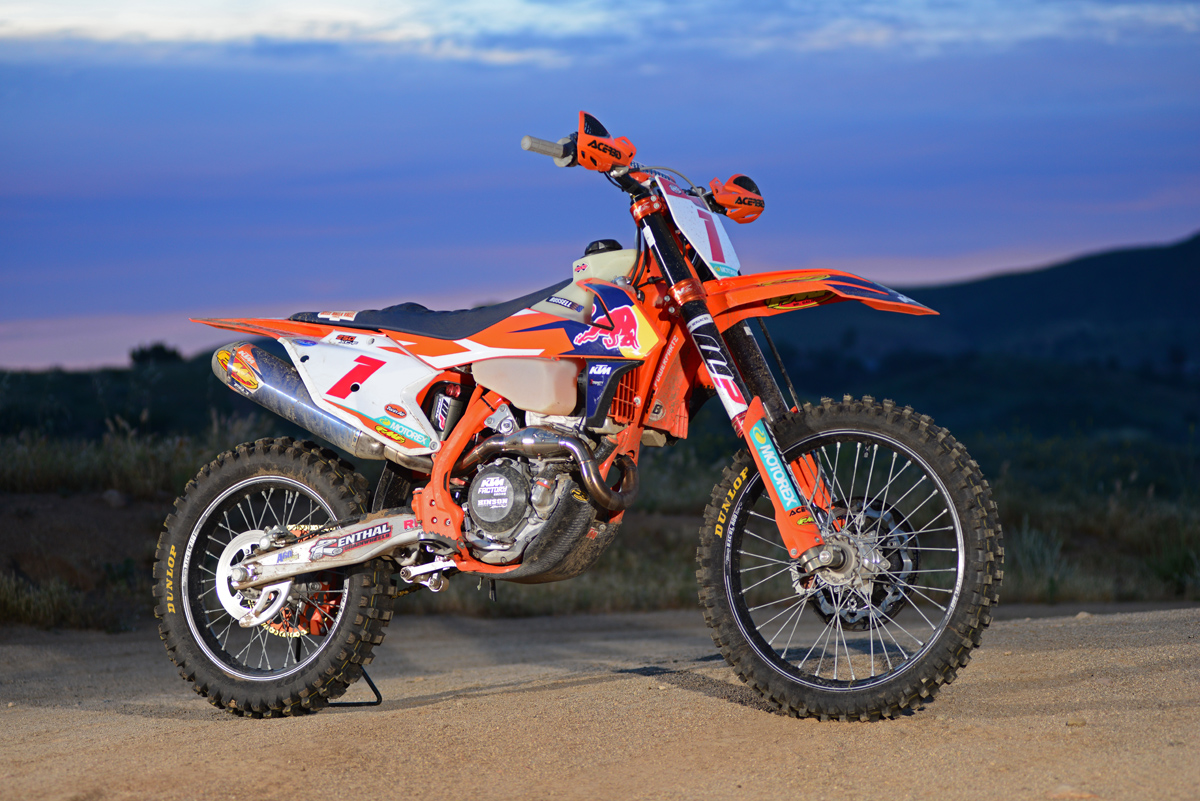 Kailub uses a WP cone valve fork, which is set up much stiffer than we expected. Many of the races have been muddy in recent years, so Kailub and the guys at KTM Factory Services have probably started to factor in 30 pounds of mud in his suspension set-up. The bike has a few touches that are typical of muddy off-road riding; one is a radiator fan, another is is solid rear brake rotor. 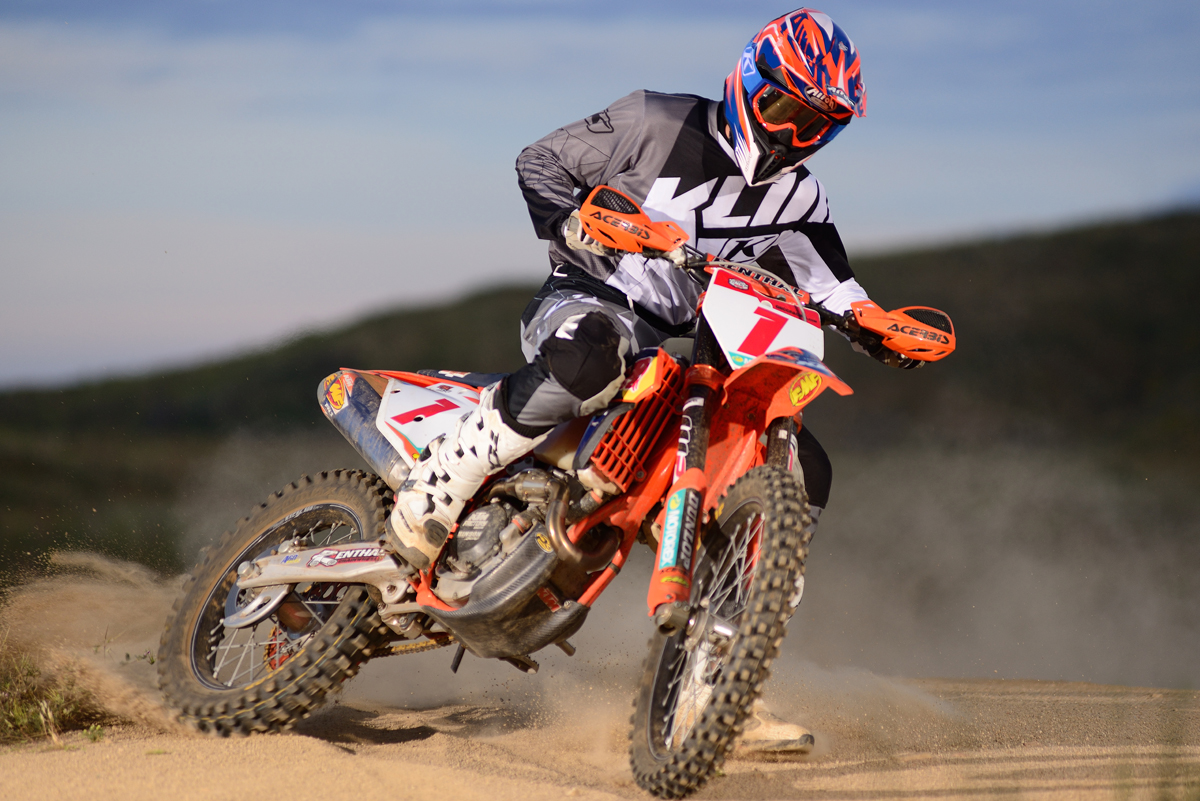 We let Justin Jones ride it, and he came back impressed. The suspension, he said, should probably be great for racing back east. Contrary to what you might think, GNCC races have really large whoops and big impacts; not nearly as many sharp impacts as you see in western racing, and stiffer settings are becoming more and more mainstream. As far as the motor goes, he could easily understand how Kailub gets such good starts. It’s fast and very responsive. Check out the print edition of Dirt Bike for a feature coming soon.

Rockstar Husqvarna’s Thomas Covington continues to wave the American flag in the MX2 class this year. It’s not easy spending to spend so much time far from home, but Covington has been doing it a long time now. This weekend he won the Mexican GP. Again. He did it in 2015, too. Here’s a look at the battle he had with Paul Jonass.

Thomas Covington: “It was one of the best GPs of my career. I felt good throughout the weekend and that helped me stay focused and do my own races. Following our qualifying race win we had a great gate pick for the final motos. I didn’t get the best of starts in moto one but got my head down and managed to get fourth. My start was a lot better in moto two. I got the holeshot and soon found myself in second behind Jonass. I spotted some good lines and was able to make my move for the lead a few laps later. Winning the second moto and getting the overall victory is a great confidence booster. We had a rough start to this championship but things are a lot better now. I’m looking forward to the races to come.”

Last week I offered my initial impression of the new KTM 1090 Adventure. In case you missed it, click here. Cole Kirkpatick was on hand to shoot video of the press introduction, and here are some clips he shot and my brief summery of the bike. We have a 1090 in our hands right now, and we’re learning more about it all the time, so stay tuned.

The National Hare and Hound series has been more competitive than ever this year. Every race goes down to the wire. Ricky Brabec flew to Idaho after winning the Sonora Rally two weeks ago and won. Gary Sutherlin has been just as busy, getting second in Idaho back to back with winning the WORCS race in the Orleans Casino in Vegas. Sutherlin actually ran the exact same YZ450FX in both races because he hasn’t got his new YZ450F MX bike ready yet. That bike will eventually step into the role of being his primary WORCS bike. 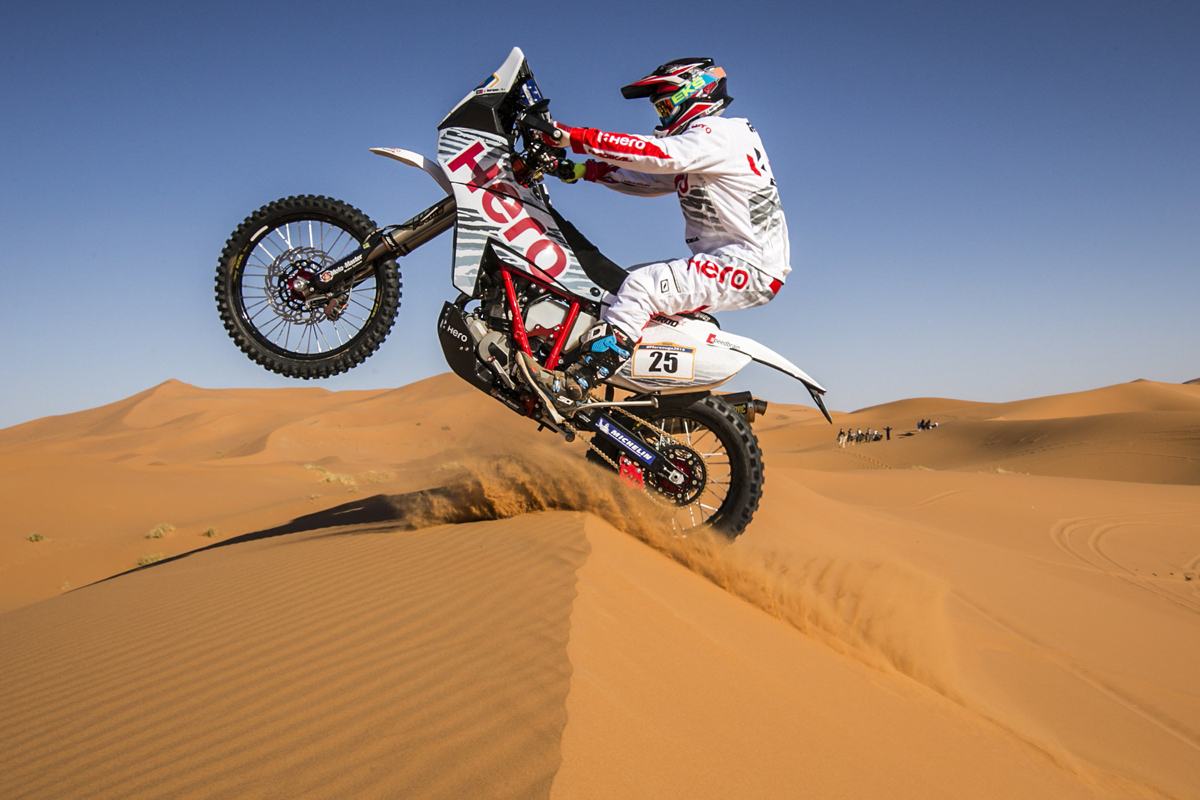 Here’s an offbeat tidbit: Hero is a company that primarily specialized in making commuter bikes for Europe, India and Asia. The company has sold over 70 million motorcycles, and this year is competing in world rally events in partnership with Speedbrain. The main rider is Joaquim Rodrigues and the racebike itself has a very interesting history. If the name Speedbrain rings a bell, it’s because it originally partnered with BMW and Husqvarna in those Rally efforts. When BMW sold Husqvarna, that left Speedbrain without a manufacturer, so they became one. The G450 that BMW developed morphed into a rally bike that Speedbrain branded, and now it carries the Hero name. It’s a legit machine; its what gave Joan Benevidez his first stage wins. 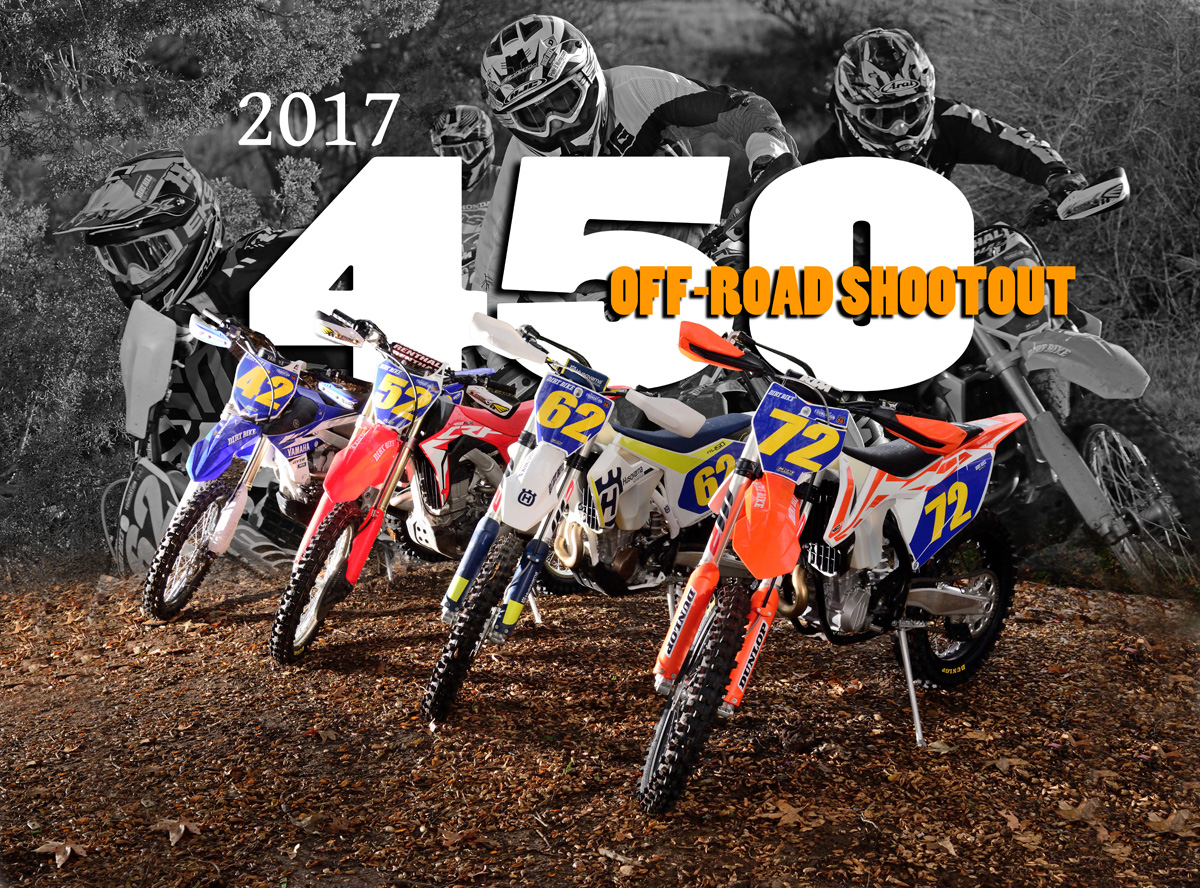 Our 450 off-road shootout is on line now, and worth checking out. Click on the image above to get there. It’s in two parts, so if you want to skip directly to the conclusion, there’s a link at the end of the first paragraph. Here are a couple of charts that I thought were worth talking about. First of all, the dyno chart is completely misleading. You would think the Yamaha is down on power. It’s a mauler! You never go way up there on top where it tapers off. The other chart is the speed in gears, which was measured on the FMF dyno. This is just to compare gear ratios, not reflect how fast the bike will go in the real world. It also serves to show how different Yamaha’s philosopy is. It has a real trail-worthy first gear. As the story points out, this is great for trail riding, but not useful for racing. The Yamaha makes so much low end power you don’t need a granny gear. It’s just nice to have.