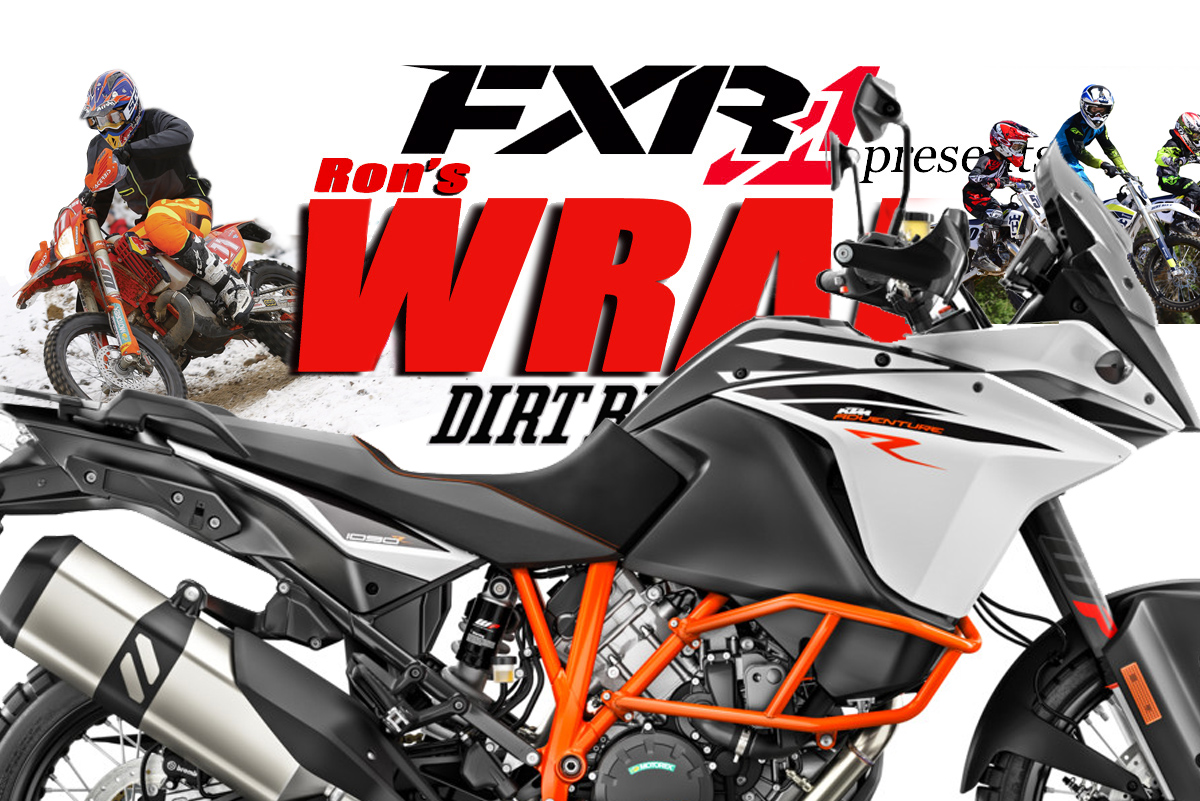 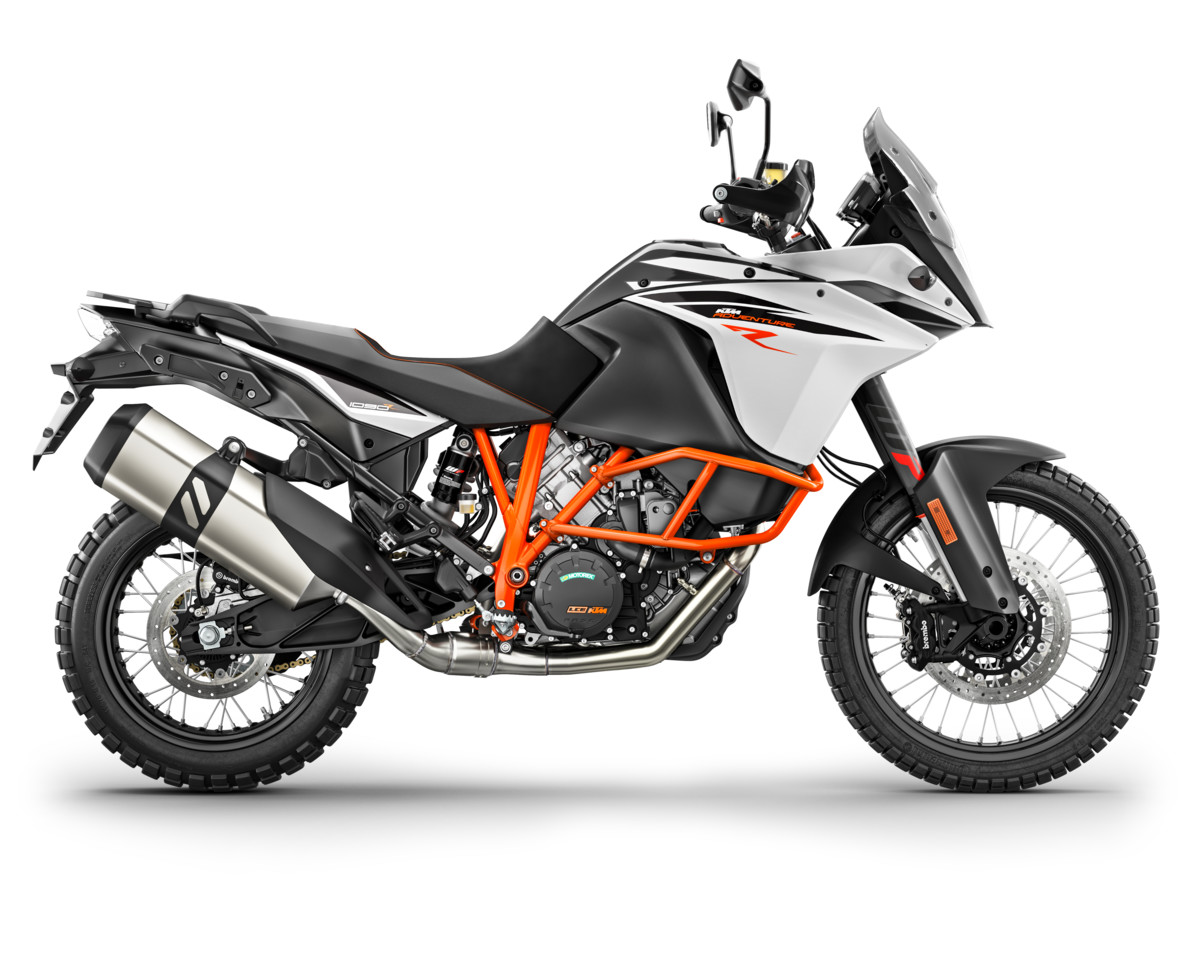 We just got back from our first ride on the new KTM 1090 adventure. This will replace the 1190 as KTM’s more dirt oriented adventure flagship. The bike is lighter, has more dirt-think and, best of all, is less expensive than the 1190. For the more street-oriented rider, KTM will still have the 1290, but it will be heavily redesigned. The 1090 will be aimed at real dirt riders. It’s about 22 pounds lighter than the 1190 and smaller in both bore and stroke. The horsepower rating is 125, whereas the 1190 was about 150. Most of that is on top; the 1090’s low-end torque is excellent 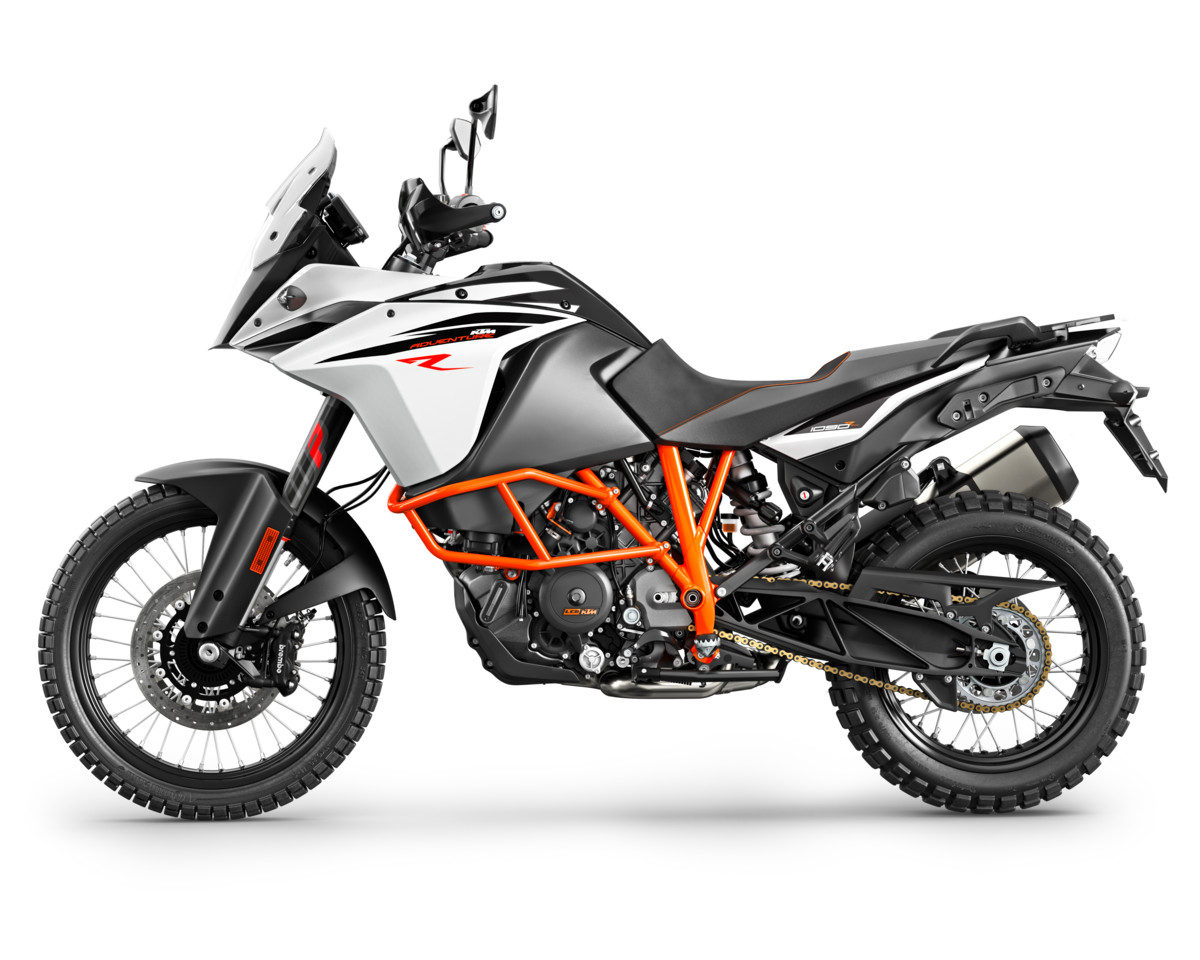 The big advancement is in suspension. The rear shock is now a dual-piston PDS design. It doesn’t use linkage (neither did the 1190) but the shock design is now much more sophisticated. The WP Split fork is stiffer, and the settings were developed by riders like Quinn Cody and Chris Birch. Our two days of riding the bike had us on dirt roads around San Diego country and the Anza Borrego area. I’ve ridden on most of these roads and trails before, and I have to say that the bike worked much better than I ever imagined. I think the guys at KTM got a little angry at all the praise the Honda Africa Twin got for its dirt ability.

By loosing peak horsepower, the KTM became much more manageable. There are electronic menus that let you customize the power output, the amount of traction control and the level of anti lock braking. When you choose the “off-road” default setting, the peak output drops down to 100 horsepower, the traction control is less intrusive and anti lock only affects the front brake. You can also turn off traction control and anti lock if you choose. I still like the bike best without either of these, although they are much, much less annoying than they were in the early days of ADV riding. 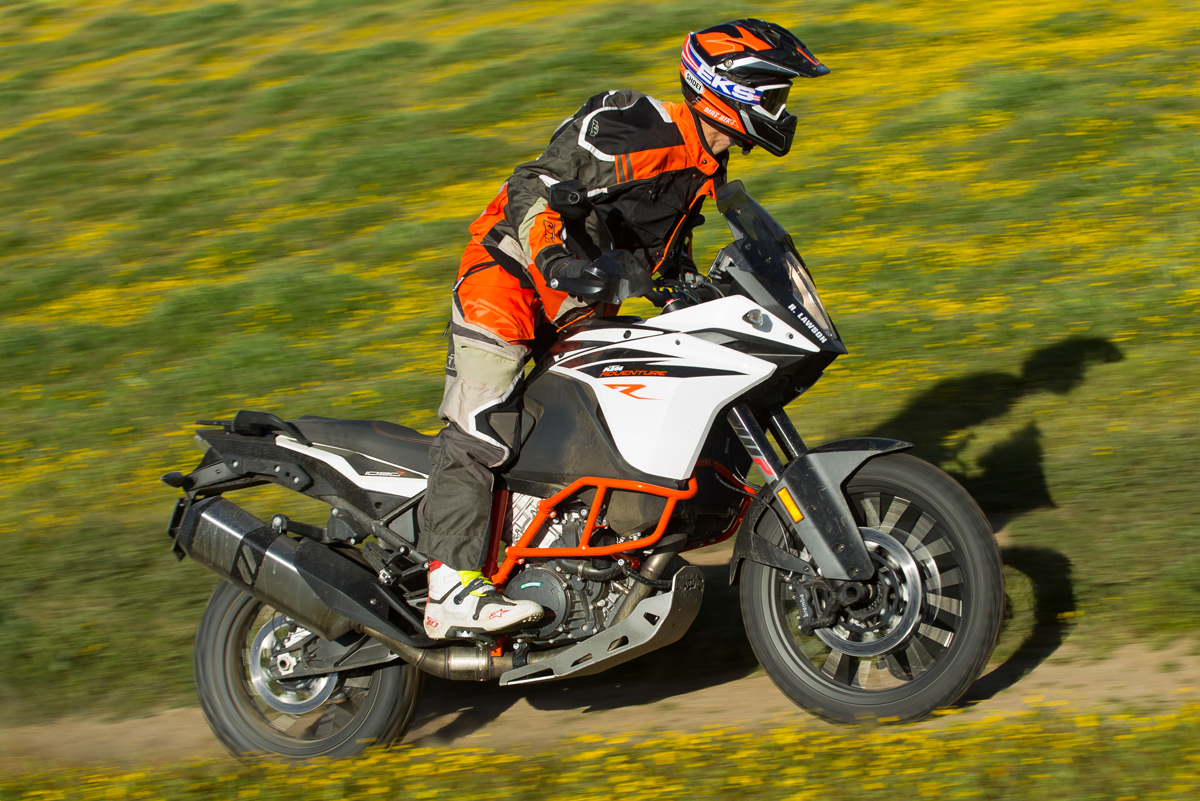 As far as horsepower goes, the 100 horsepower setting is best in the dirt. I tried the bike at full strength, and it was a little silly. Street bike guys might want to go into full-power mode every time they get on a short length of pavement, but I usually didn’t bother. The menus are a little distracting. As far as suspension goes, KTM did a great job. The Africa Twin set a very high bar in this department, but the KTM is very well balanced in the dirt and still perfectly comfortable on the street. It still doesn’t like square-edges, and you can make the fork bottom loudly if you cross a rain rut at speed. There’s no getting around physics;  this is still a big, heavy bike. The best news is the price. MSRP is $14,600. That puts it closer to the Africa Twin ( which sells for $13,300). We’ll have them both in the print magazine for a comparison soon.

Prior to the U.S. introduction of the 1090, KTM revealed the more street oriented 1290 to the press. We didn’t go on that trip, but we plan on swinging a leg over the 1290 ourselves very soon. KTM might claim that this is the street version, but the video from the press intro in Peru shows that the bike can be ridden in the dirt quite well.

THE FAMILY THAT RIDES TOGETHER … 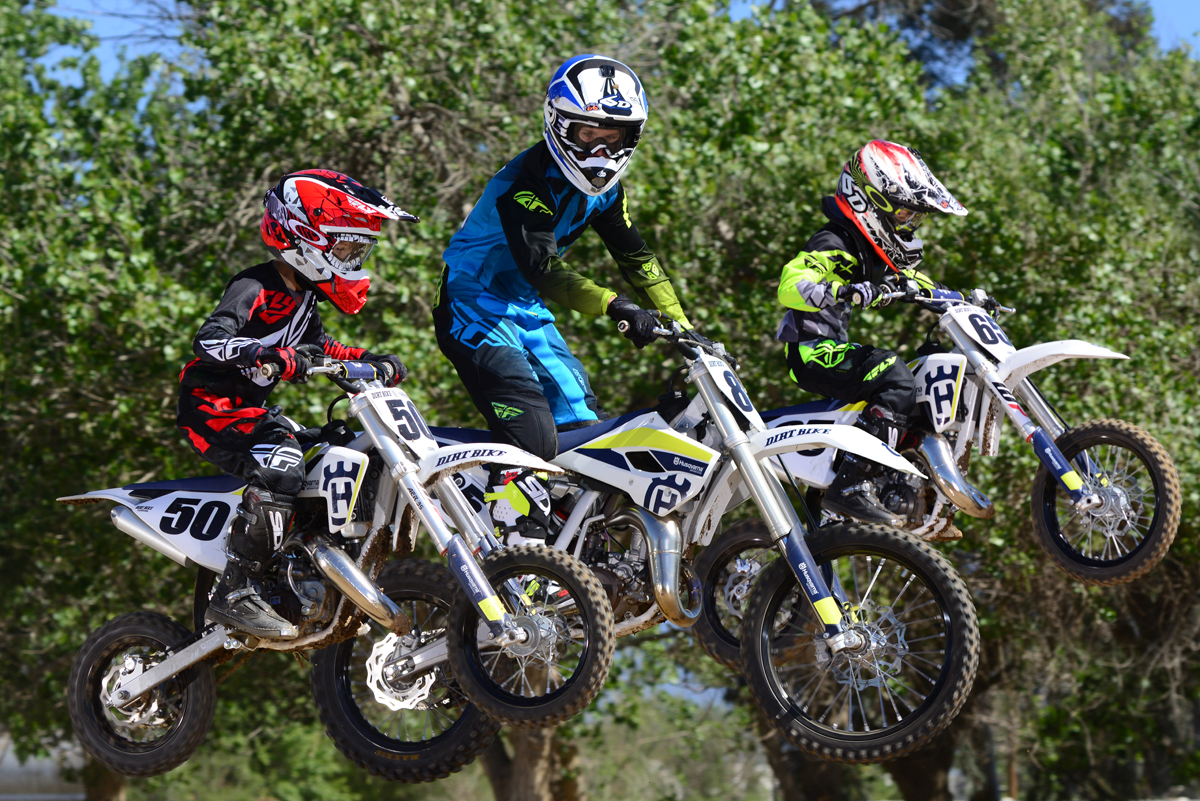 Tim Weigand has been a big part of the Southern California racing scene for a long time, and is in the unofficial record book among the most successful riders in the history of the 24 Hours of Glen Helen. He also earned two ISDE gold medals, a Western Hare Scrambles Championship, three district championships, three Baja 1000 wins and did a few stints racing for factory MX teams in Australia. Now, he finds himself working for Husqvarna’s Race team and traveling every weekend. That means he has to make his family time really count. They do it by riding dirt bikes–go figure. We recently got together with Tim and his family at Milestone MX for a photo shoot on the Husky line of minis. Husqvarna is rapidly becoming a full-line motorcycle maker, with a 50, a 65 and and an 85 in the line. All of them, as you might guess, are very similar to the KTM models. In this case, we were especially interested in the TC65 because it had an aftermarket Rekluse automatic clutch installed. This is a great idea. When kids are physically big enough to ride a 65, they aren’t always ready for a manual clutch. The Rekluse helps bridge that gap. 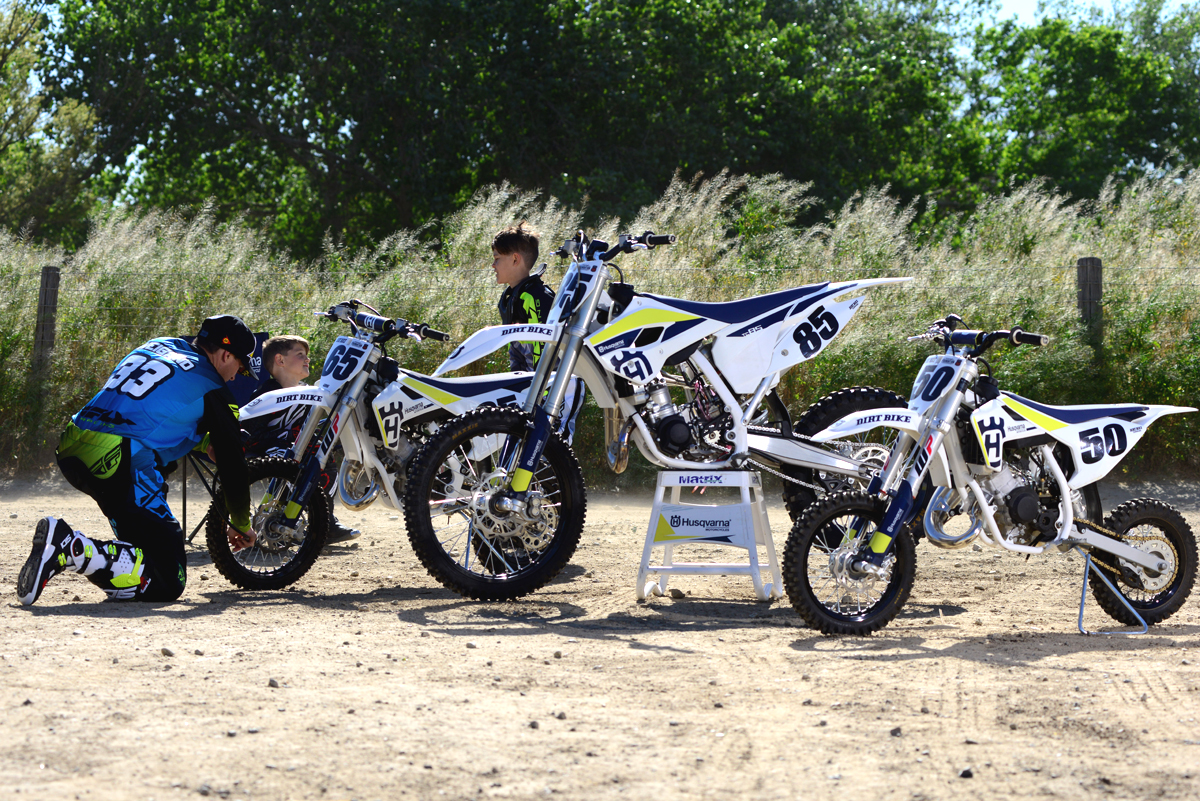 The photo shoot itself was fun. Getting three adults to pose for photo after photo is hard enough, so I thought this was going to be a big challenge. As it turned out, they did exactly as they were asked–much more so than Mark Tilley or most of my usual subjects. The best part was that Tim rode the 85 himself and looked quite natural. He’s not the biggest guy in the world.

EFI 2-STROKES AT THE WORLD ENDURO

The World Enduro championship got underway in Finland last week. It was frozen and ugly, as you might expect this time of the year so far north. Finnish riders dominated the race, as you also might expect. Current E1 World Champion Eero Remes (a Fin), moved up to the E2 class on a four-stroke TM 300 and won that class on both days. And Antti Hellsten (another Fin) won both days of the Enduro GP class. What caught our eye, though, was who finished fifth on day one and sixth on day two in the E2 class. 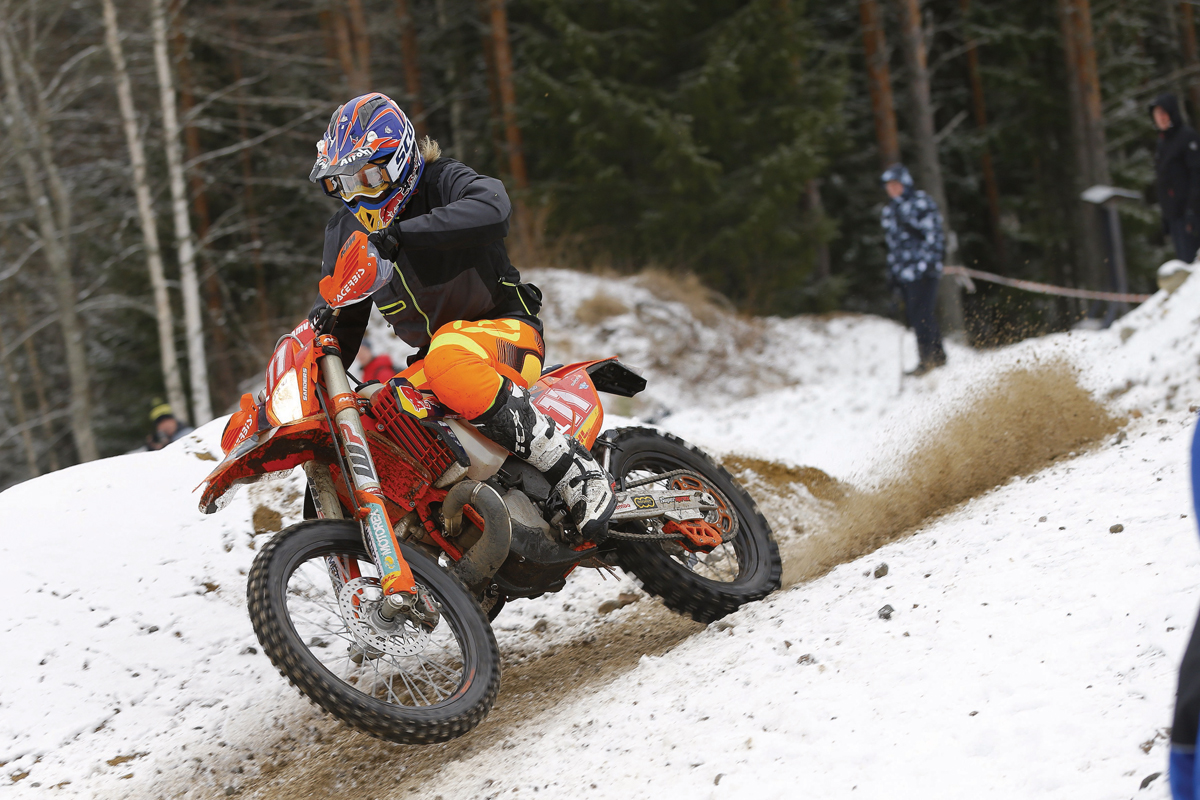 Daniel Sanders rode a KTM 250EXC. Looking closely at the bike, it appears to be a 2018 version, complete with fuel injection. 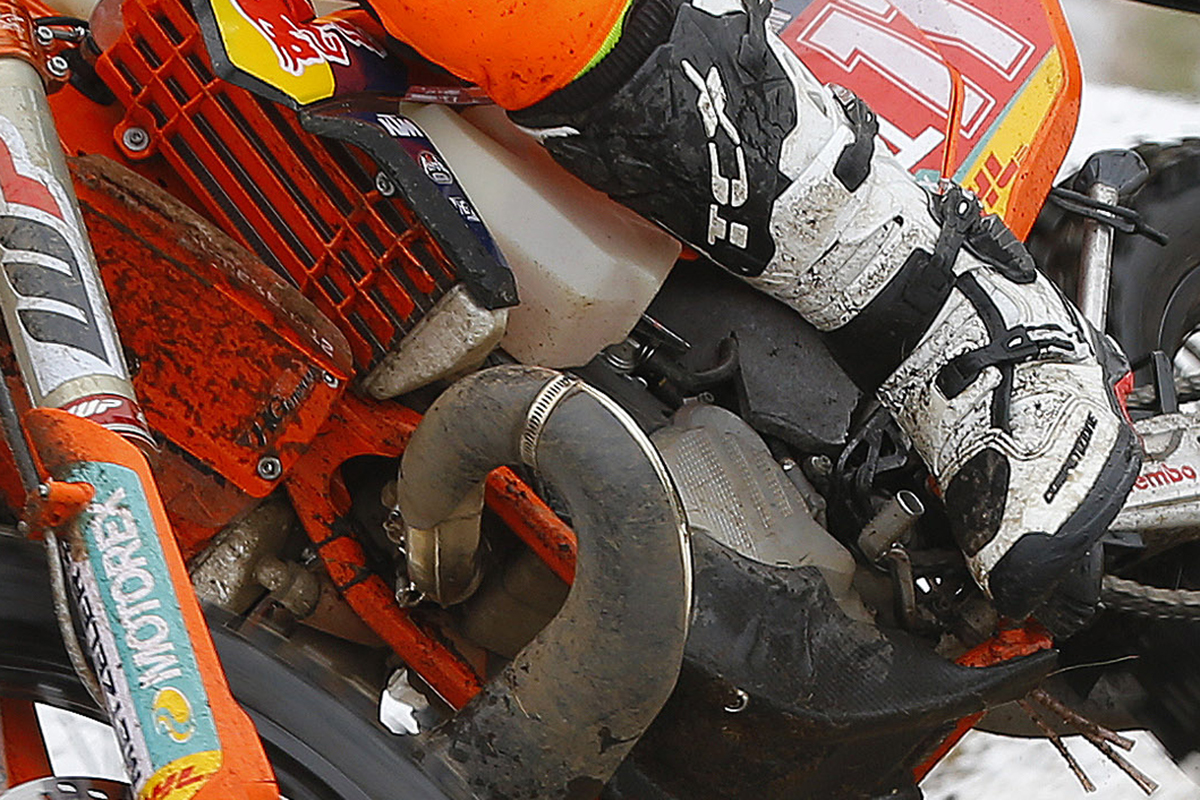 KTM mechanics were careful to cover the tell-tale parts of the motor. We imagine they didn’t want to answer too many questions and spoil the party for the official reveal of the bike on May 18 in Erzberg, Austria. KTM has tested the bike several times in competition that we know of, the most recent being the Roof of Africa. What makes this different is that the bike looks finished. It should be; KTM says the bike will be for sale in the U.S. next October. It won’t be called the 250EXC here. It will be called the 250XC-W TPI.

We’re still buzzing from the fact that Colton Haaker won a second consecutive World SuperEnduro Championship two weeks ago in France. It puts him in a very elite group of Americas who have world titles. In fact, in 2016 he became the first to win an FIM Enduro Title, if that’s what SuperEnduro can be called. This doesn’t take anything away from Ryan Sipes, who won the ISDE in 2015, but that isn’t an official championship. Here’s the long version of the video from France, where Colton finished on the podium to clinch the title.

If you’re looking for some hard core adventure riding, the Taste of Dakar is a great thing to put on your calendar. It’s just the thing for that new 1090 you plan on getting.