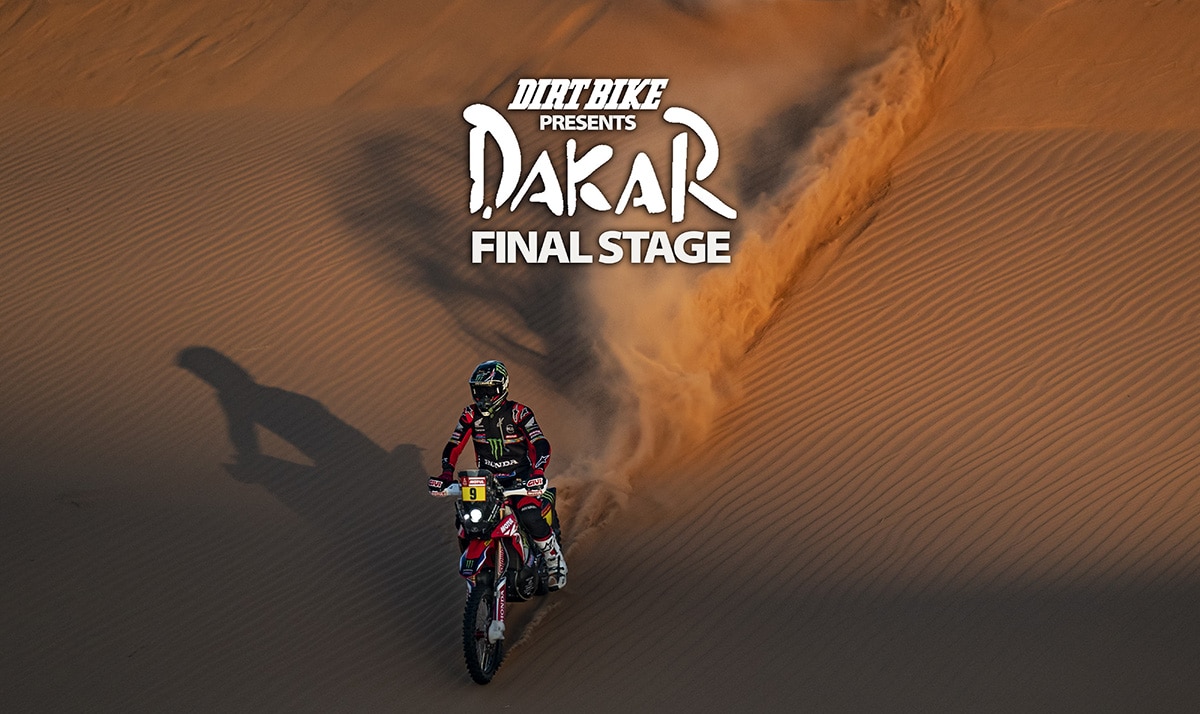 Ricky Brabec has won Dakar. After finishing second to Honda teammate Jose Ignacio Conejo on the 12th and final round, Ricky and the Monster Energy HRC Rally team could breathe again. Brabec had led the rally since stage three and scored two stage victories along the way. Throughout the event, Brabec was consistently aggressive, stretching his lead almost every day. The one rider who was the biggest threat was Rockstar Husqvarna’s Pablo Quintanilla, who cut into Brabec’s lead with a victory yesterday. That meant  that Quintanilla had to start up front today, which often means trouble. Despite that, he put in a solid ride from the front, opening the entire stage to ultimately finish fifth, just over three minutes down on Conejo. In claiming second, Quintanilla secured his best ever result at the Dakar, which, following an injury sustained at last year’s event.
Quintanilla’s teammate Andrew Short endured a tricky start to his 2020 Dakar Rally campaign – a crash on stage two that resulted in damaged navigational equipment meant time lost for the American and a 30-minute penalty after being forced to fix it at the start of the following day’s stage. Nevertheless, he regrouped and gave his best right to the end of the event. Claiming 10th on the final stage to safely bring his Husqvarna FR 450 Rally home in a commendable 10th overall, Andrew enjoyed the race and was pleased with his overall performance

Ricky Brabec: “We’re here. We won! At the end, we put the pieces to the puzzle together. We couldn’t do it without every rider in the team. I’m really happy. It’s my fifth Dakar, my second time finishing… I woke up this morning just happy to ride the last day. And we’re here. We won! We had to be smart and focused every day. There’s no top guy on the team, we all work together, we’re a family. We all won.”

Pablo Quintanilla: “I feel amazing. To spend most of 2019 in recovery and now to be here with my best ever result makes me extremely grateful. I never thought that I would be in this position at the beginning of the race. I would like to thank the team for their hard work over these two weeks – they have done an amazing job. Overall, my race has gone really well, it’s been a tough event for everybody, and the main goal was always to reach the finish. A podium at the Dakar is like a dream come true, especially after such a hard one this year. I still want that win so I’ll work hard and be back next year.”

Andrew Short: “I’m really happy to get to the end of this year’s Dakar – it’s been a long race, good fun, but very tough for me, I had a lot of challenges. The first week in the north was beautiful – I’ve never raced anywhere like it. I had some issues in those first few days that really put me on the back foot for the rest of the event. It took a lot out of me as you prepare all year for this race and to have such a big knock so early on was tough. This is only my third Dakar and I’m still learning. A two-week event like this is certainly different to a one-week world championship event and you have to be able to gauge your speed the whole way through. I definitely want to be back here next year for Dakar 2021”

American Skyler Howes had a spectacular ride in the rally, finishing ninth overall despite a number of issues, which included two broken swingarm pivot bolts. Yesterday, that resulted in most of the motor mounts breaking and a very challenging ride. He was able to start today thanks to help from the factory KTM team, which was no doubt impressed with his ride.

This was a year of changes for the Dakar Rally. It was the first held in Saudi Arabia after 11 editions in South America. Brabec also becomes the first ever American rider to win. It also closes a very long chapter in the Dakar history book where the Red Bull KTM team could do no wrong. It had been 18 years since another make (BMW) finished on top. This is Honda’s sixth victory at the Dakar Rally after the five clinched in Africa, the most recent occurring 31 years ago: Ciryl Neveu (1982, 1986, 1987), Edi Orioli (1988) y Gilles Lalay (1989) took the previous top honours. In 2013, Honda returned to the Dakar Rally after a 23-year absence. During that eight-year spell, Team HRC has been on the final podium on two occasions: Paulo Gonçalves (2015) and Kevin Benavides (2018) both in runner-up positions.

The rally covered some 5000 kilometers of timed special stage and a total distance of 7800 kilometers. To review the entire 2020 Dakar rally coverage, click here.