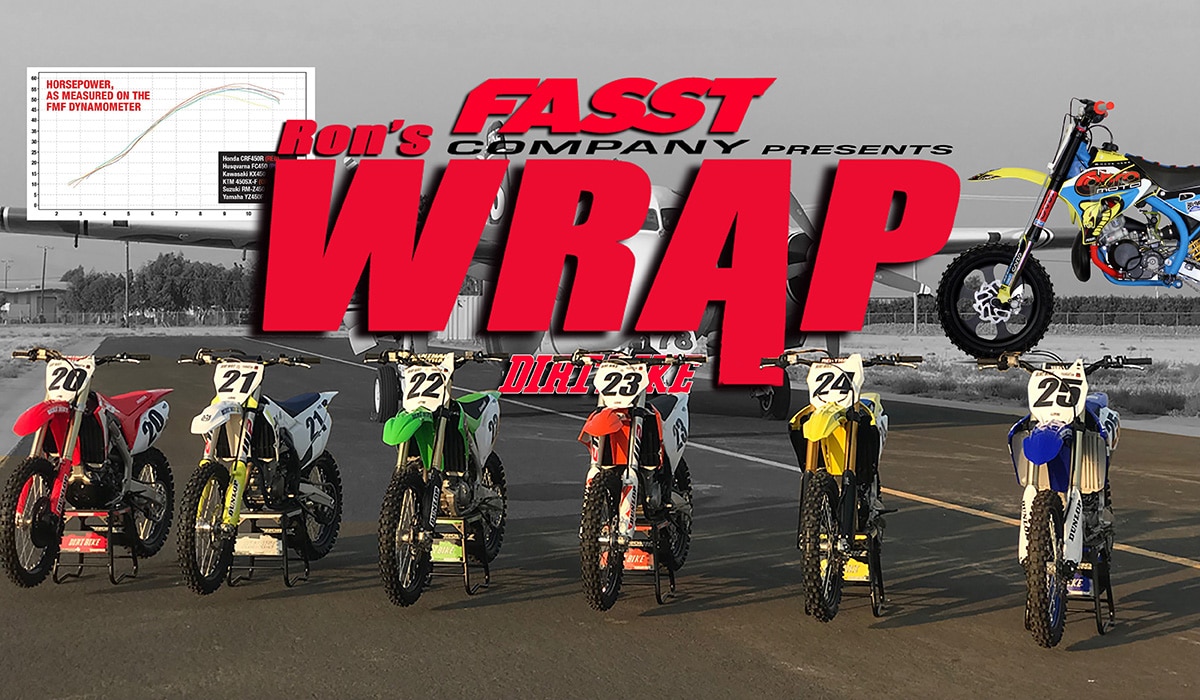 THE WINNER OF THE 450 SHOOTOUT

Our 450 motocross shootout is complete for 2019 and the results are in. We started the whole affair two months ago when we got our first 2019 test bike. That just happened to be the new Kawasaki KX450, which had the most changes of them all. The last of the six to arrive was the Suzuki RM-Z450, which had the fewest changes. Go figure. 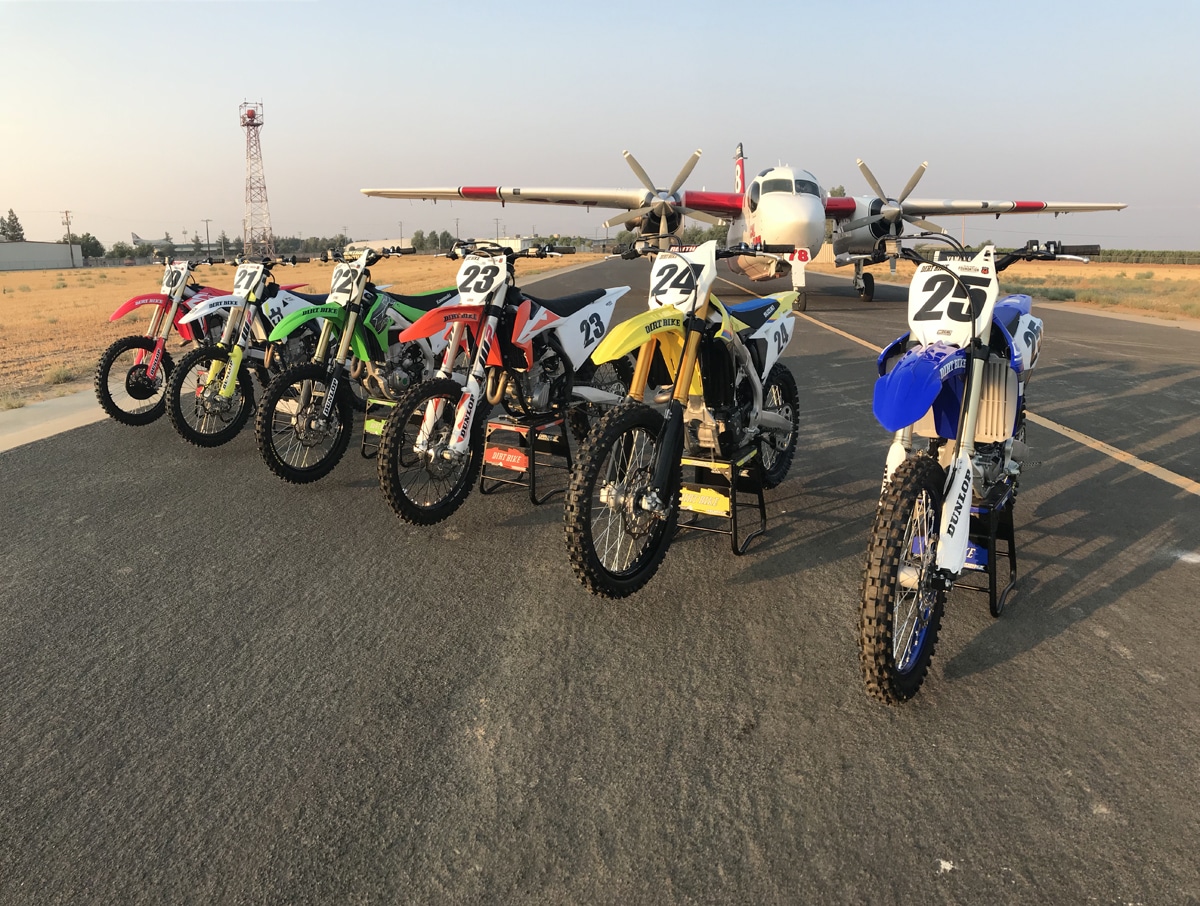 Once we had them all together, we went to Porterville, California to ride them all back to back at the city’s municipal MX track. While we were there, Travis Fant shot the video action while I shot the still photos. The video is now edited and up. Watch the 2019 450MX shootout by clicking here.

In the old days, you would have to wait two months while the printing presses in Kentucky churned off enough copies of the November issue of Dirt Bike to ship to the whole world. Nowadays, we can get the info out quicker, so we now can officially announce a winner. The new Kawasaki KX450 is the best overall motocross 450 of the year. It was a very close race, with different opinions among test riders. In the end, everyone agreed that the Kawasaki was the best pick for the average rider. There are some other shootouts cropping up with very different results. I have the advantage of having been a part of over 200 shootouts in various categories and classes of bikes since starting this gig almost 40 years ago. Some of the websites offering shootouts are making classic mistakes that I made a long time ago. I humbly offer advice to them in my column for the November print issue. The full shootout will appear in that issue, too, with more complete results. We gotta save something for print!

When all the riding was done, we shipped the bikes off to FMF, where Marty Scriven ran them all on their Dynojet dynamometer. The numbers came out about like we expected, with the Honda producing the most peak power. Here are the peak numbers for each machine:

The full numbers are available by clicking here. 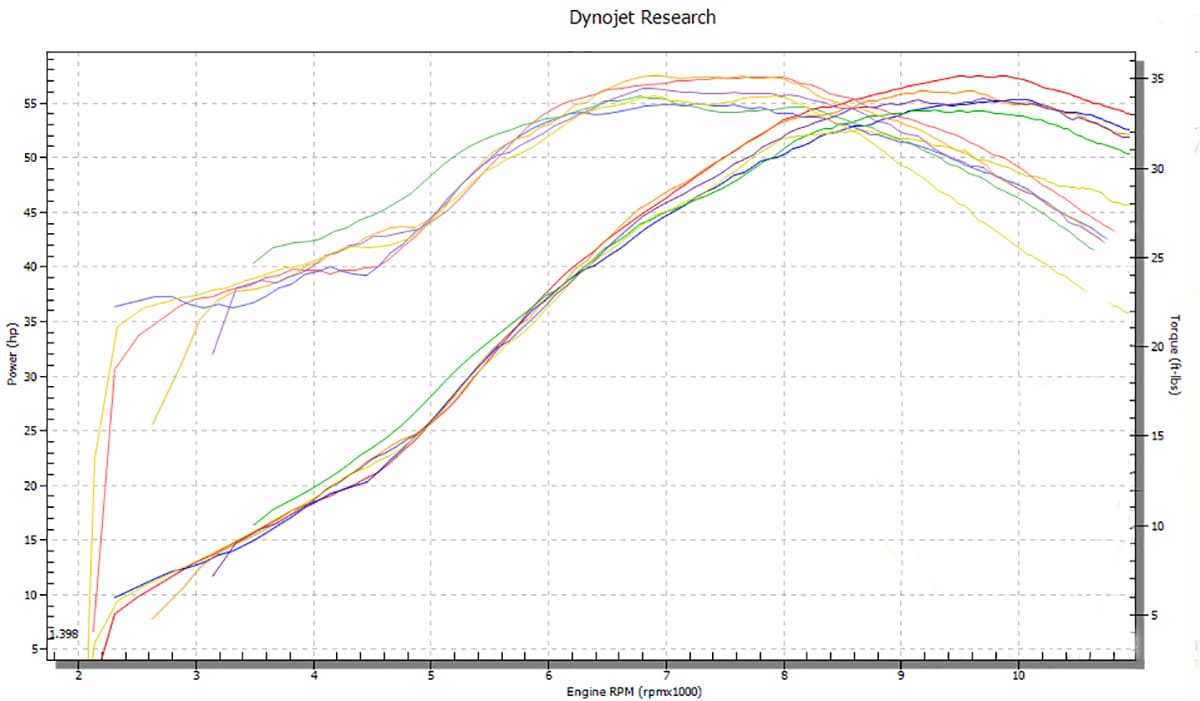 For those of you who love looking at the torque curves as well, here’s the original printout right off the FMF computer. Note that the torque scale is on the right and that the curves relating to that scale are the ones with a hump in the middle. The HP curves have a peak on the right. We rarely show the torque curves in print because with limited space, it can get confusing. People who understand the relationship between torque and horsepower find the graphic representation of torque useful. But to be clear, they come from the same data and they aren’t independent things. You get horsepower numbers by multiplying rpm times torque, then dividing by 5252. It’s that simple. 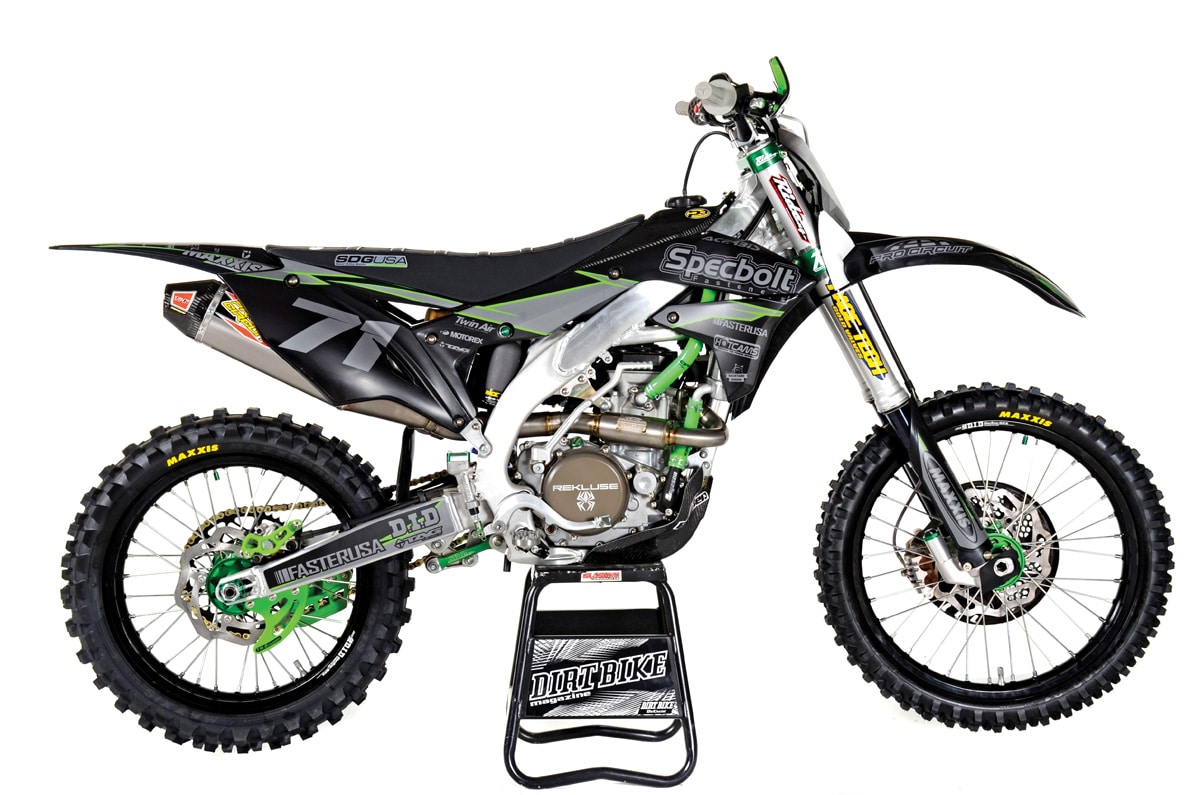 We  like the 2019 Kawasaki KX450. But we really like the 2018 version as well. In fact, it was probably the favorite of Mark Tilley’s. He ran it for the first half of the year in the Big 6 GP series. Before letting go of the bike, he rebuilt it to see if he could make it the equal of the new KX as a pure motocross bike. He took off all the GP stuff and started from scratch. The result is the machine you see here. 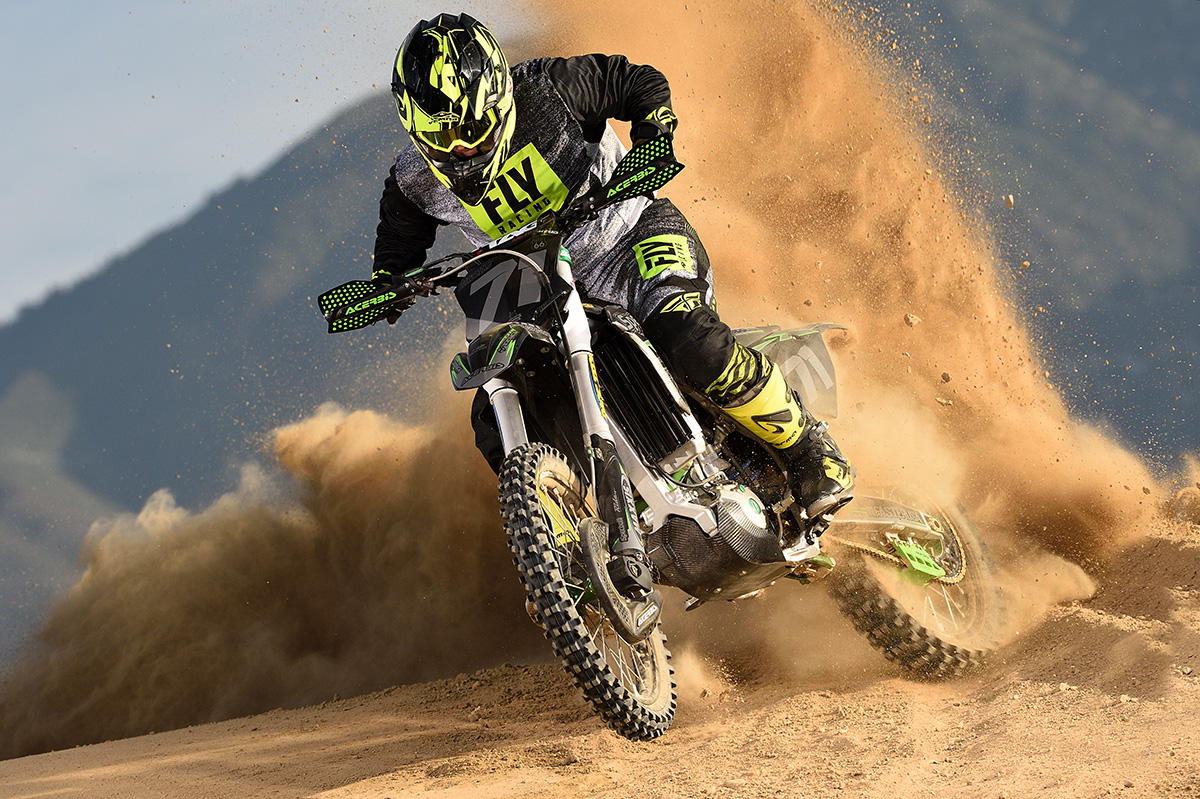 The most important task was to fix the sore spots that kept the KX from winning the 2018 shootout. One was the air fork. Race Tech makes a kit that converts the Showa SFF TAC fork to a coil-spring fork with a single fork spring. Then it was all about power. Mark installed a Vertex high-compression piston, a Rekluse Torque-drive clutch and a Pro Circuit exhaust system. Specbolt shaved off a little weight here and there. In the end, he couldn’t do anything about the electric starter, and he decided to leave the clutch cable in place. See it in the November print issue of Dirt Bike.

THE NEW COBRAS ARE HERE 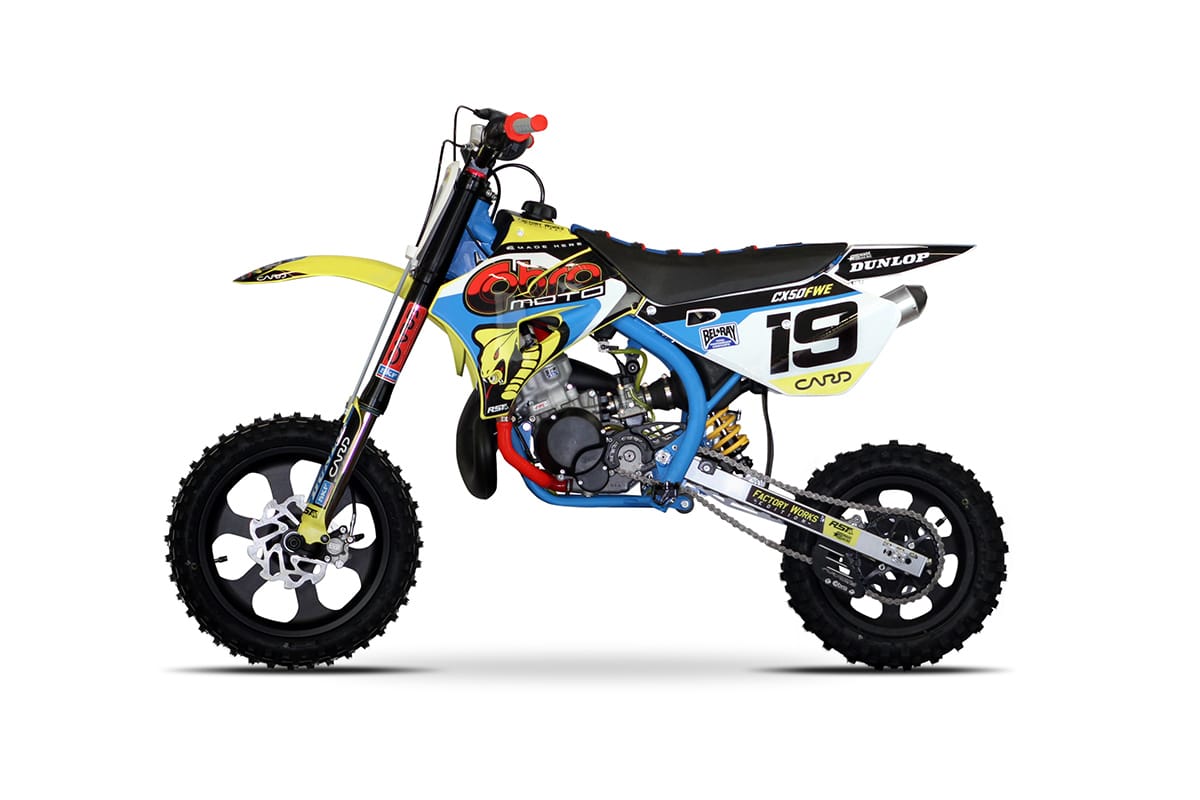 Last week, we ran into Nick Wey at Glen Helen. He was out with his son and his 2018 Cobra CX50. Nick is from Michigan and knows the people at Cobra well, and he reported that the 2019 models are out. Check out the CX65, the CX50SR, the CX50JR and the FWE (pictured above) by going to the Cobra website. 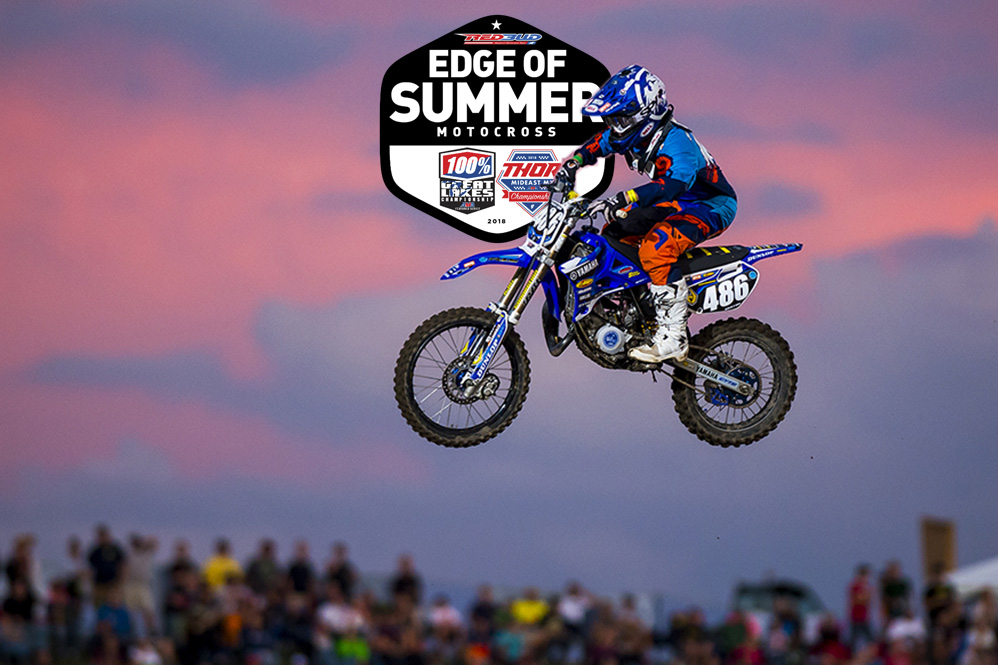 “Race it before the rest of the world,” says RedBud MX’s Tim Ritchie on the newly-created Monster Energy Motocross of Nations (MXoN) track at RedBud, which is open to all racers – including any global MX pros who want to run it – when RedBud hosts the 5th annual Thor Edge of Summer MX, Sept. 8th and 9th.

RedBud’s iconic 1.25 mile AMA Pro MX National track has been re-designed for the upcoming MXoN. After moving the starting gate and numerous sections and turns, the more wide open, GP-style MXoN track at RedBud is set to play host to the world’s top racers later on in October. But until then, the fifth running of the Thor Edge of Summer MX will allow racers an unprecedented sneak preview of the MXoN track, an incredible opportunity for both dirt bike and ATV racers to boot up and compete on the track before attending the legendary MXoN in person.

In addition to racing the MXoN track, another highlight for Edge of Summer MX racers will be a  preview of Thor’s 2019 product line, displayed in the massive Thor/MXoN hospitality area – set up for the first time at RedBud.

With more than 30 classes for racers of all ages and ability levels, the Thor Edge of Summer MX at RedBud is open to everyone. Both days are part of the Thor Mideast Championship Series, and Sunday is Round 2 of the 100% Great Lakes Championship Series with contingency from four manufacturers – Honda, Kawasaki, Suzuki and Yamaha.

What: 5th annual Thor Edge of Summer MX at RedBud

YOU DON’T WANT TO MISS THIS RACE! Click the image below for more information now. 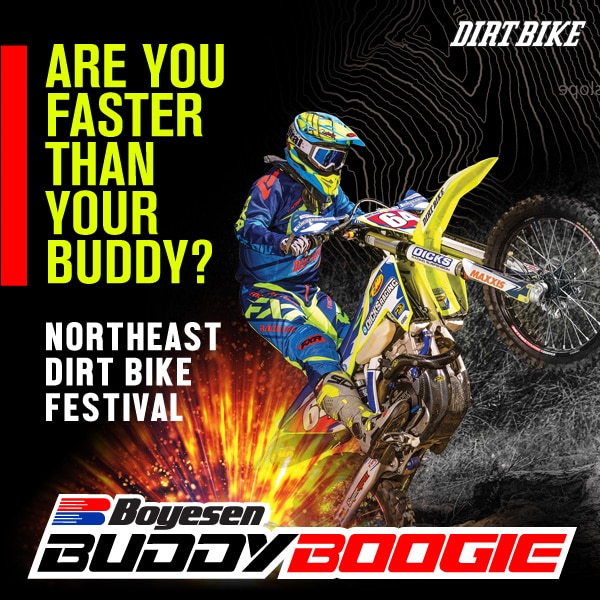 Between his extreme enduros and wild adventures, Kyle Redmond has been putting together a weekly feature called Adventure Bike Spotlight for us. Each week he comes up with a little insight into the adventure bike world, which he is learning about as he goes. This week he features an older BMW R1200GS, and found this photo of Jim Holley testing our 1994 R1100GS. Good times! Check out last week’s Adventure Bike Spotlight here.