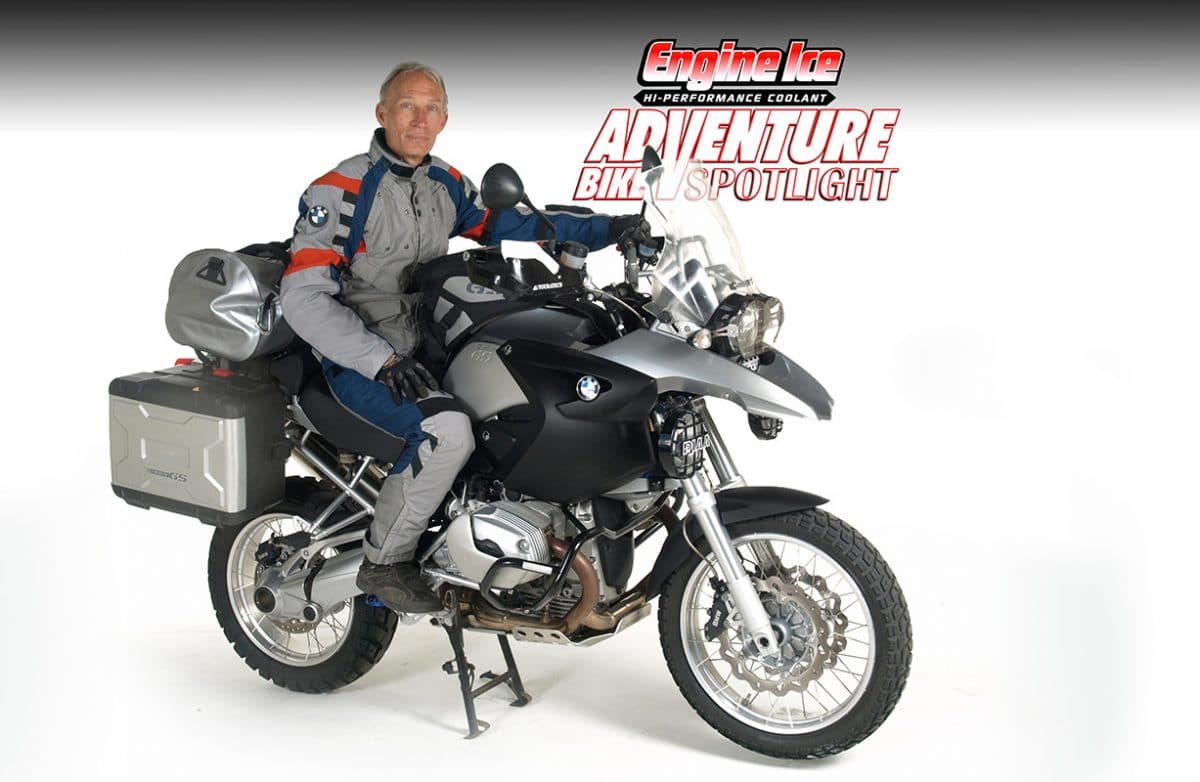 “It was the best bike I’d ever owned,”  said Mark McClellan, “and I had it set up just the way I like it.” Mark is a friend of the DB staff and he was talking about his 2007 BMW R1200GS of a few years back. In 2013 we did a photo shoot featuring his bike and we thought it would be fun to look back on a classic example of a well-used adventure bike. Mark has owned four big BMWs and one KTM 950 in his Adventure biking days, and the 2007 R1200GS had seen some tough rides. 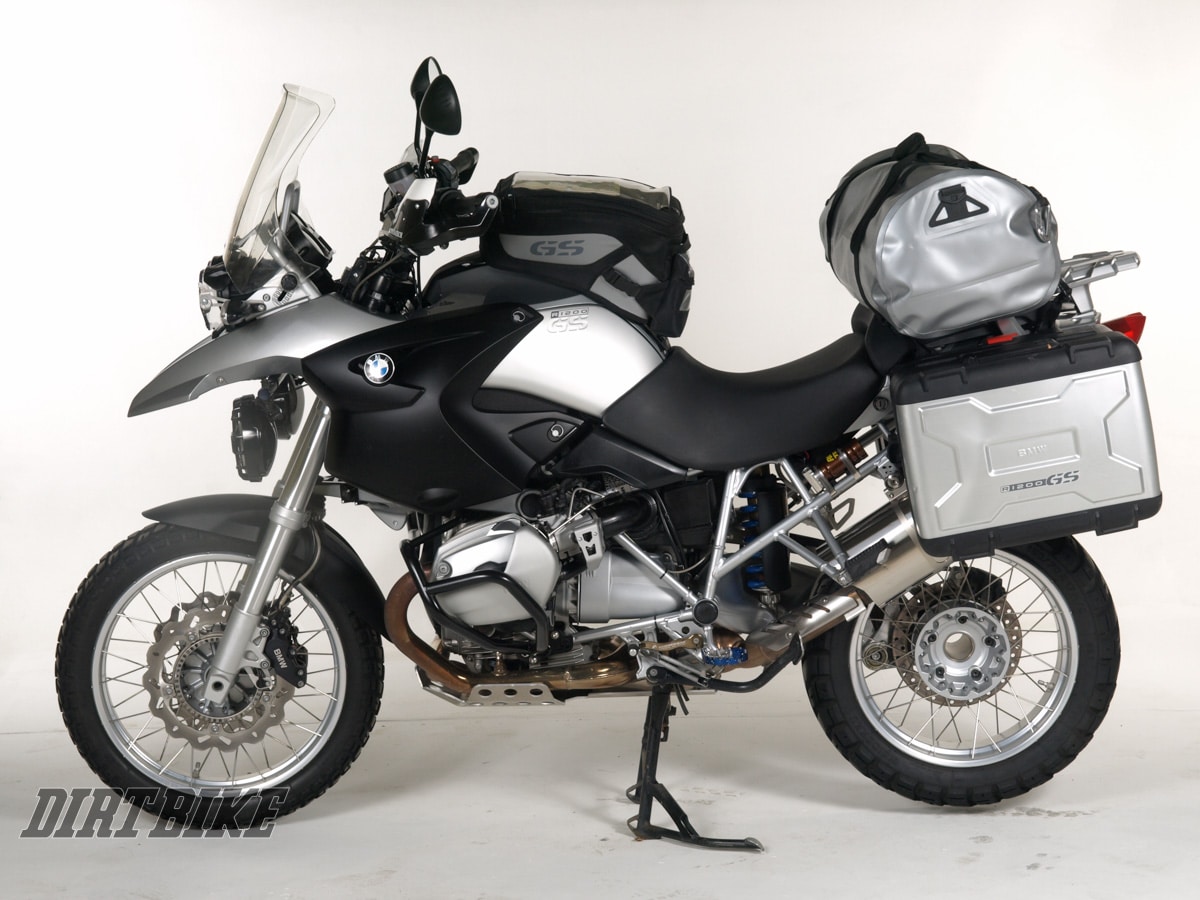 By GS standards, his GS wasn’t worn out—not even close. It had 50,000 miles. But some of those miles should have counted double. He kepted careful track and could honestly document that 19,000 had been off-road. He had several close friends with similar bikes and was in a club that does real adventures with tents and everything.  So most of the details had been figured out through trial and error. Here are some examples of trinkets and products that made the bike work:

Race Tech Suspension: Mark’s ’07 was a standard GS, not the GSA with longer suspension travel. That’s okay, he’s not especially tall and doesn’t really want a towering seat height. But the standard shocks were lacking. Race Tech’s G3 front and rear shocks are adjustable, durable and withstand the demands that a 600-pound motorcycle can make. Contact: www.racetech.com. 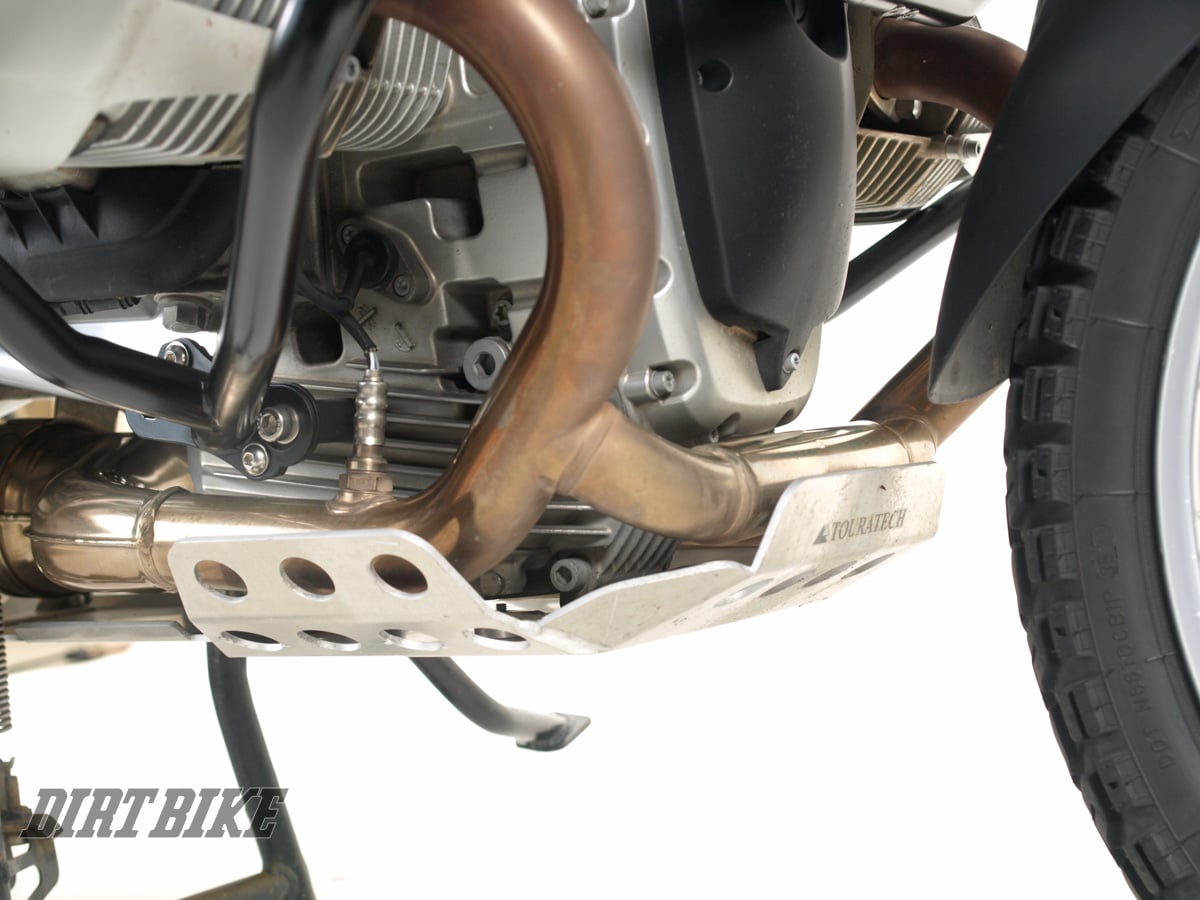 AltRider: This is a Seattle-based company that specialized in GS’s that really go off road. Obviously you can do a lot of expensive damage in the dirt. The company makes $515 crash bars that you’ll wish you had if you lay your GS down. Contact: www.altrider.com. 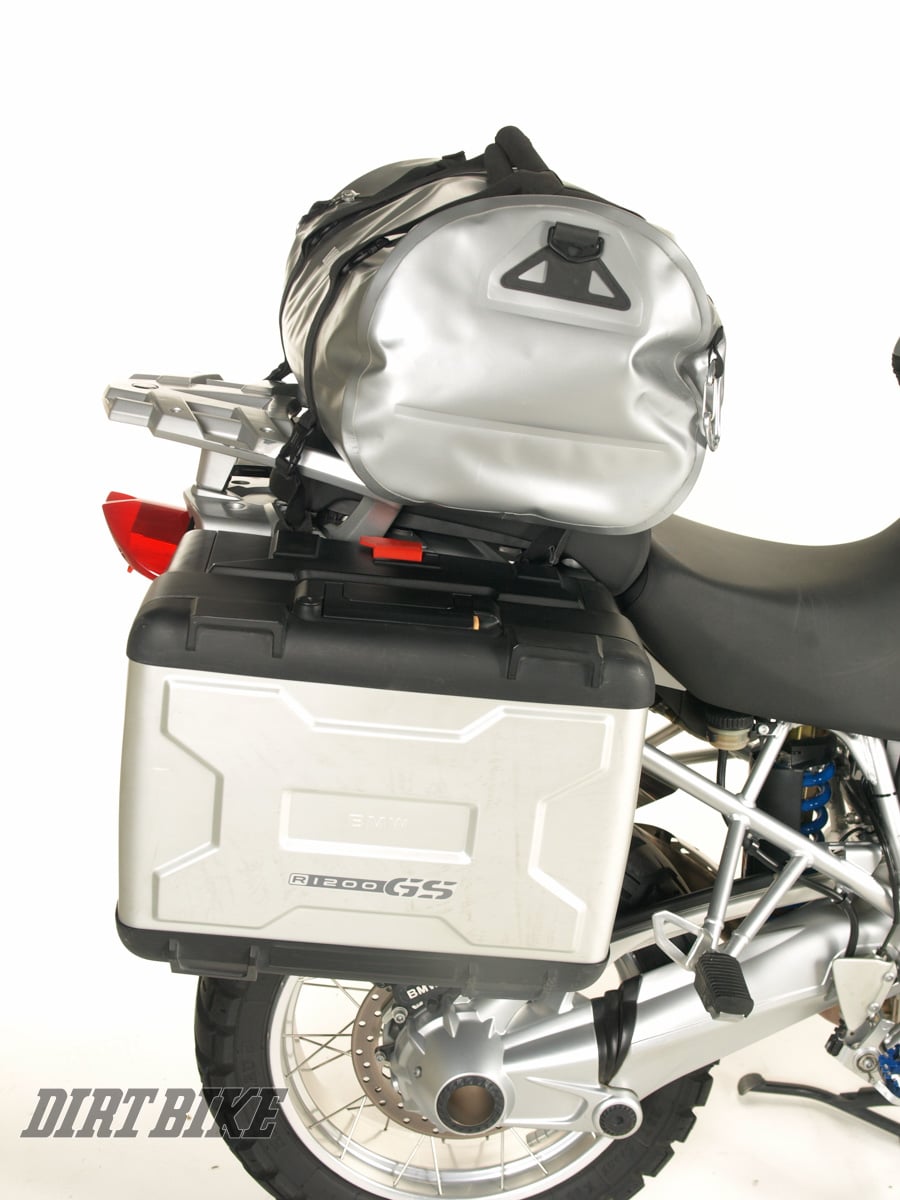 BMW: Instead of a hard top trunk which makes climbing aboard the bike difficult, Mark carries his tent and camping items in a BMW soft bag. On the sides,  Mark’s original plan was to make due with BMW’s ABS Vario  panniers for a while. He figured they would eventually be destroyed, then he would upgrade to the top-loading aluminum ones that come on the Adventure models, which are considerably more expensive. So far, the plastic cases have survived, though.  Other BMW products: the hot grips, GPS mount and a flip-down rear brake pedal extension, which makes the rear brake more accessible when you’re  standing on the pegs. Contact: www.bmwmotorcycles.com 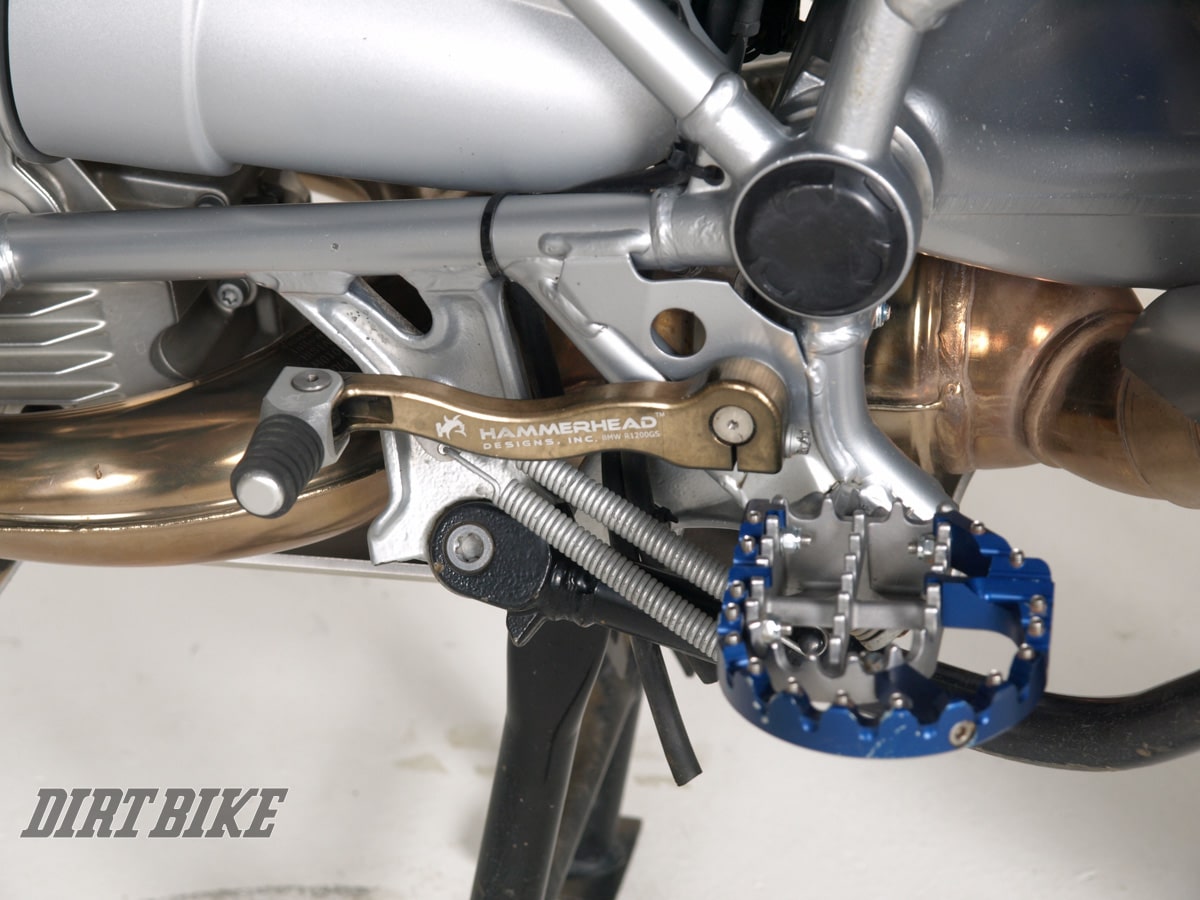 Zip Ty Footpeg Extensions: The upgraded GSA footpegs are a big improvement over the somewhat embarrassing stockers. But Mark really raves about the prototype footpeg extensions that he is testing for Zip Ty Racing. They allow you to handle the whole bike more easily. Contact: Ziptyracing.com. 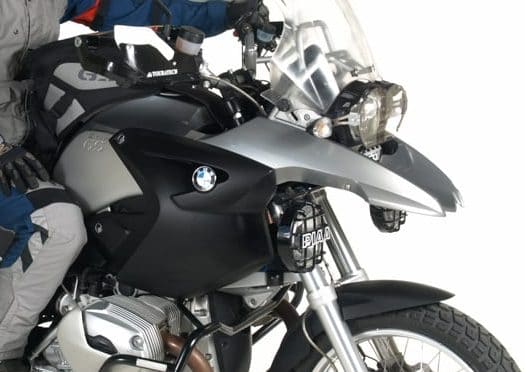 Touratech: Mark’s bike has the Touratech Pro Handguards with extensions, which sell for $118 a set. Touratech also makes a number of well-thought out protectors that really help a GS weather bad conditions. Touratech skid plates are some of the toughest and they sell for around $260. Mark has a potentiometer guard, Brake reservoir protector, EFI protector, steering stop, headlight shield and oil-cooler guard. Most of the light guards sell for around $50. Contact :www.touratech.com.

Other stuff: Mark has Galfer brakes, a Hammerhead shifter, Heidenau tires and PIAA auxiliary lights. He shortened his front blinkers (we promised not to turn him in to the DOT).  This is a machine that has been a work in progress for five years. It might not be finished yet, but we don’t know if Mark can resist the Siren call of the  of the new liquid-cooled GS. Our best guess is that he’s find room for both in his garage.The BMW tank bag has most of the small items that Mark might need quickly. This includes first aid supplies, eye drops and so forth. But there are also a number of spares, like the extra controller for his electric vest. 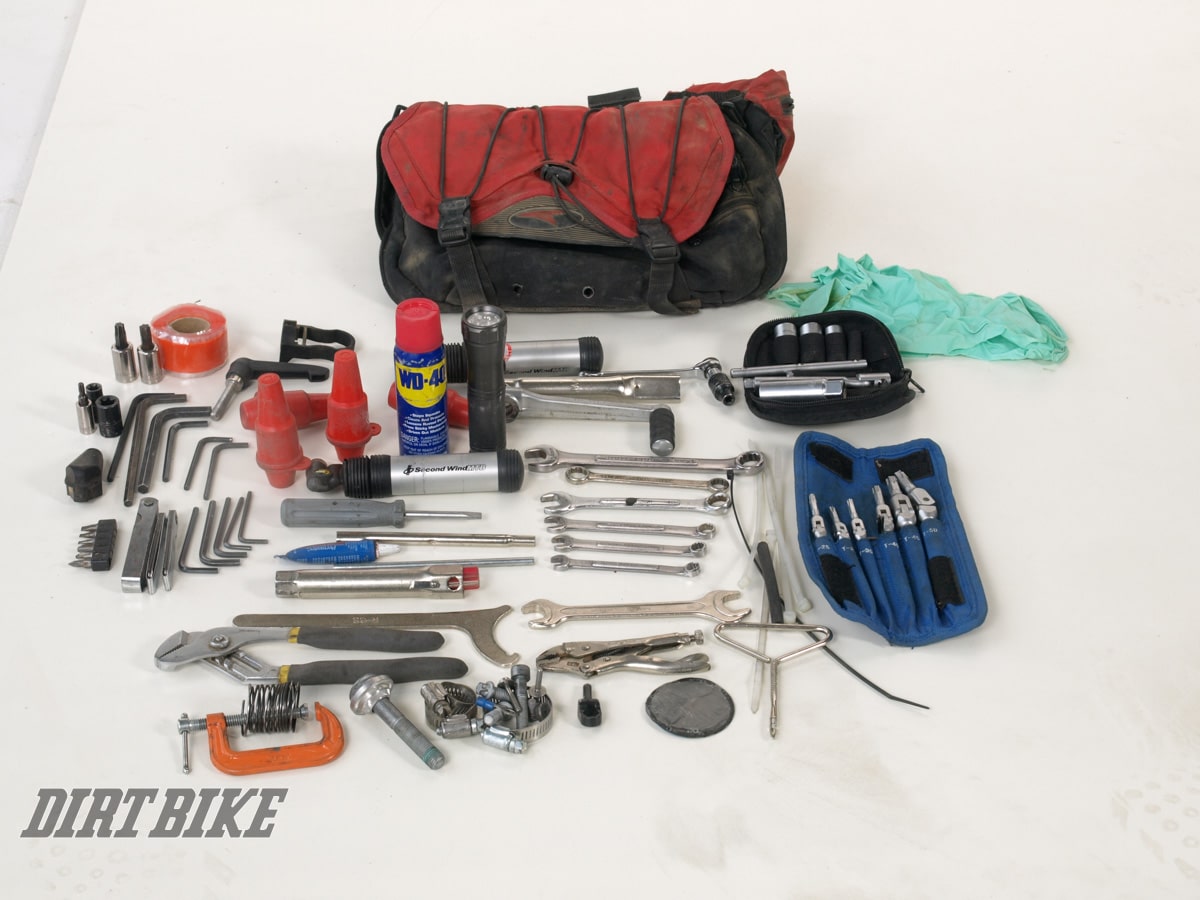 In one of his side cases, Mark has his trusty tool belt, which will also go on an occasional dirt bike ride. Since he rides sweep on many adventure rides, he carries items for a number of different bikes, like Triumph spark plugs and so forth. Most of the spares are the products of experience, like  BMW windshield mounts and Rescue Tape.

Check out the new BMW GS1200 in our buyers guide by click here or by clicking the photo below. 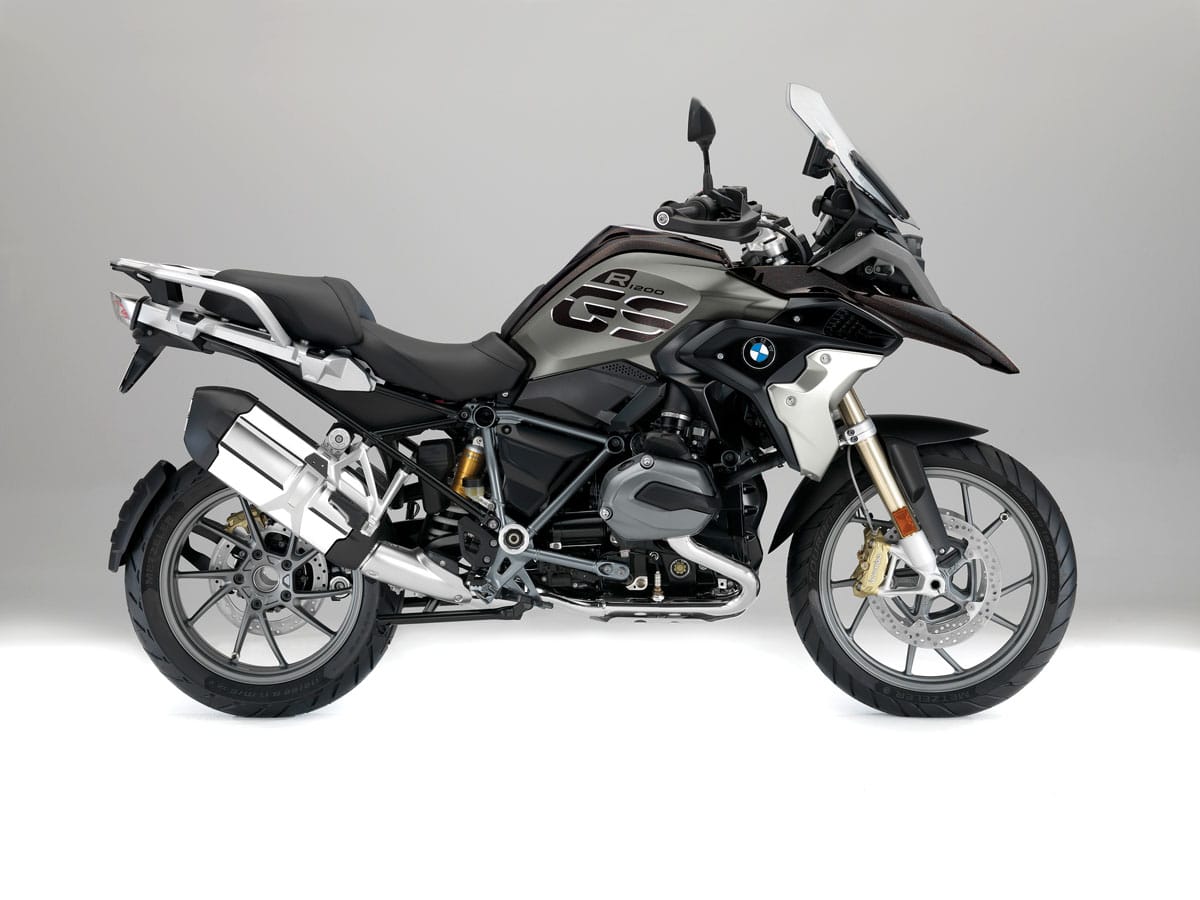