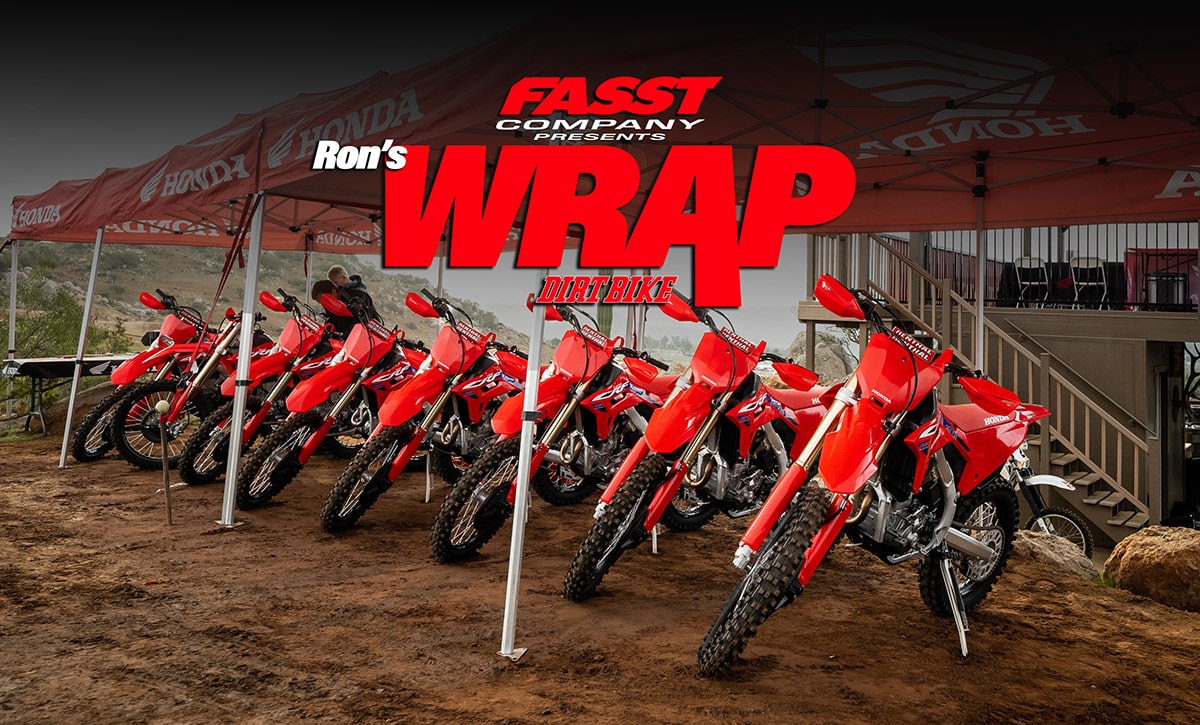 This week we got to ride three 2023 Honda off-road machines at Chocolate Mountain Ranch near El Cajon California. The event not only served to introduce the CRF450RX, the CRF250RX and the CRF450X, but Honda took the opportunity to honor Johnny Campbell for his 30 years of involvement with the company.

Of the three bikes, we spent the most time with the Honda CRF450X. This is a real trail bike and one of very few full-size motorcycles that’s still eligible for a California Green sticker. Yamaha, KTM, Husqvarna, GasGas and Beta don’t have any that pass the test any more. What’s going on in California is a subject for another day, but for here and now the 450X is legit and it’s a wonderful machine. To be honest, we think of the Honda as sort of an unofficial dual-sport bike. The guys at Honda probably cringe to hear us say that because they have a real dual-sport in the CRF450RL, which is based on the same platform. In truth, this is a better bike and in many states you can license it. Not in California, of course, but that’s California.

The original CRF450X lasted from 2005 to 2019. That bike won something like 11 Baja 1000s, and this one picked up right where that one left off. But in stock form, it’s no race bike. The bike that the SLR Honda team used to win the 1000 in November is highly modified. Like we said, this bike is based on the CRF450RL dual-sport bike The X produces more power than the dual-sport model because of a different  EFI map, a larger head pipe and a less-restrictive muffler that has no built-in catalytic converter. Honda left off the street-legal stuff, of course. The headlight is a halogen unit instead of an LED. There’s no kickstand kill switch, no blinkers and no hang-down part in the license-plate area. The X doesn’t have a keyed ignition, and the instrumentation is a little more spartan. On top of that, the suspension has slightly different settings, but like the L, the fork and shock are high-end KYB units. Without the DOT equipment, the X is lighter than the L. It’s 263 pounds on our scale without gas, whereas the RL is 14 pounds heavier. The new X has a great power delivery. It’s super quiet and pure fun on the trail. It’s a stark contrast to the closed-course competition bikes like the KTM 450XC-F and Honda’s own CRF450RX. The X has excellent torque, but when it gets into the arm-yanking zone, it’s far milder than 450cc race bikes. We did have some problems with occasional flame-outs. That’s typical of bikes that have emission hardware–even if the standards are looser for this bike than they are for the street, it’s still on the lean side.

The Honda’s strong point is suspension. It’s soft, but that’s perfectly appropriate given its mission in life. And at speed, the bike is super stable. It gets more secure and comfortable as speeds get higher and higher. That’s one of the reasons that this is the chosen bike for Baja racers. When you’re crossing desert whoops at 60 mph, the bike goes dead straight. After a day of that, you lose your perspective. You feel like 40 mph is walking speed. The bike’s top speed, we estimate, is around 90 mph. Another reason they love it is that Honda did a great job with the gear ratios. First gear is taller than you might expect, but that’s actually a good thing. Too often six-speed gearboxes have a granny gear that’s so low it’s unusable.

All those Baja teams have different formulas for getting the X up to race-speed. It has to start with a different ignition, of course. Some shops say they can remap the stocker, which is supposedly locked. Most go to a Vortex. You can use the stock head with a little head work and the RX cam. The muffler is the main issue. Not only is it restrictive, but it’s heavy. There are a number of aftermarket companies that know what to do. Colton Udall’s Champion adventures, JCR and SanDiego Power Sports, to name a few. You don’t have to do any of that to enjoy the CRF450X, though. This is one of the few EPA-legal trail bikes that we consider 100-percent ready for the trail in stock form. Still, we plan on turning Nic Garvin loose on our CRF450X to make it into more of a race bike, Be sure to check back to see what he comes up with.