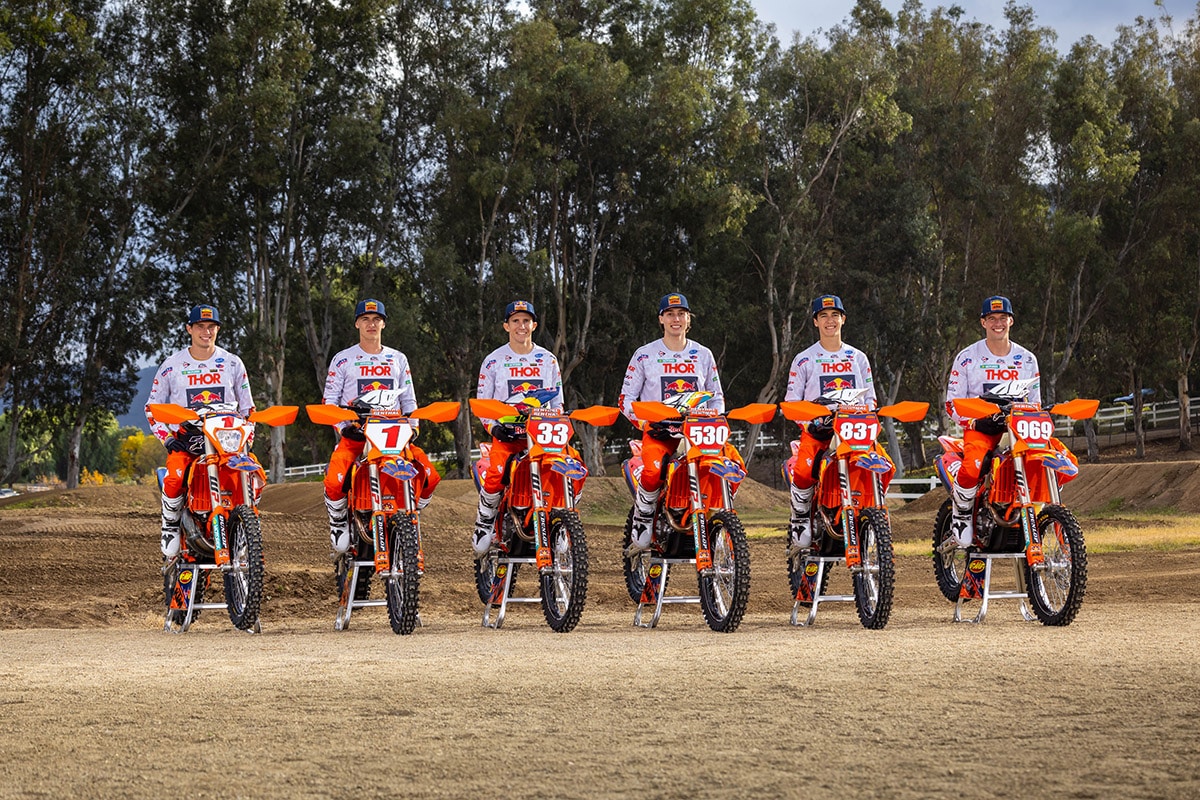 KTM North America, Inc. officially unveiled its FMF KTM Factory Racing offroad team for the 2023 season, including six riders who amassed a total of six titles during the 2022 season. In addition to its four returning veterans, the team is excited to welcome two newcomers – Mateo Oliveira and Johnny Girroir – who are both set to make their official debut in the premier division in 2023. Tim Weigand returns as Team Manager of the talented squad, guiding the team and sharing his vast knowledge and experience.

Highlighting the team’s returning lineup is reigning WORCS and NGPC Champion, Dante Oliveira, who is ready to hit the west coast once again in 2023, joined by multi-time champion and teammate Taylor Robert. Trystan Hart will look to top a successful 2022 campaign with a title defense in the AMA U.S. Hard Enduro Series and KTM-veteran Ben Kelley is back in action and ready to reclaim the GNCC crown in 2023.

Ben Kelley: “I’m looking forward to another season of GNCC and National Enduro racing with the KTM offroad team. I’m coming back from a major injury, and I’m determined to get back to my previous winning form and hope to fight to reclaim the GNCC Championship, while working towards my first National Enduro Championship during the 2023 season.”

Johnny Girroir: “I’m really excited to join the FMF KTM Factory Racing Team and I’m looking forward to seeing what the future holds! I am looking forward to lining up on the front row in GNCC, and ready to fight for wins and championships in both series.”

On the west coast, Dante Oliveira will be defending his AMA National Grand Prix Championship (NGPC) title on a KTM 450 XC-F, as well as competing in the AMA West Hare Scrambles Series (WHS). Meanwhile, Dante’s brother, Mateo Oliveira, will make his full-time Pro-class debut in NGPC and WORCS events, also aboard a KTM 450 XC-F.

Dante Oliveira: “I’m happy to be working with the team for 2023! I’m going to be changing it up, getting back to where I started out racing dirt bikes in West Hare Scrambles, also working hard to defend my GP Championship.”

Mateo Oliveira: “I’m super excited to be a part of the FMF KTM Factory Racing Team. It’s been a dream of mine to get to race for this team and to be following in my brother’s footsteps, alongside him, is surreal. Working with Timmy and the crew is going be a blast, I can’t wait to get started!”

Trystan Hart is back to defend his 2022 AMA U.S. Hard Enduro Series Championship after dominating the series in 2022 on a KTM 300 XC-W, claiming victories at all seven rounds of the schedule, plus adding a third-place finish at the famed Erzberg Rodeo along the way. Hart will also ride a KTM 350 EXC-F in the 2023 AMA EnduroCross series, a title he barely missed out on in 2022.

Trystan Hart: “As we embark on my third year on the team, KTM and I are both looking for more wins and championships. Winning Erzberg is very high on my list for 2023.”

Taylor Robert returns to action after missing most of last year due to a season-ending injury he sustained in April. In 2023, Taylor will ride select events on a KTM 450 XC-F in preparation for his goal of leading team USA to a third World Trophy at ISDE, which will be held in Argentina.

Taylor Robert: “I am very excited to be a part of the FMF KTM Factory Racing Team for my 10th year in a row. This year is all about raw speed for me. I’m going to go out there with the objective of being as precise and fast as possible. Using select races throughout the year to prepare me for the end goal of helping team USA win its third World Trophy at ISDE.”

Antti Kallonen, Director of Offroad Racing: “Once again, we have been able to strengthen our team by securing the current and future champions of the sport. Tim manages the team very well and has assembled the best possible support to find success. The strengthened partnership with Ranch Russell will provide our athletes with state-of-the-art facilities for the physical and mental training needed to win races and championships.”