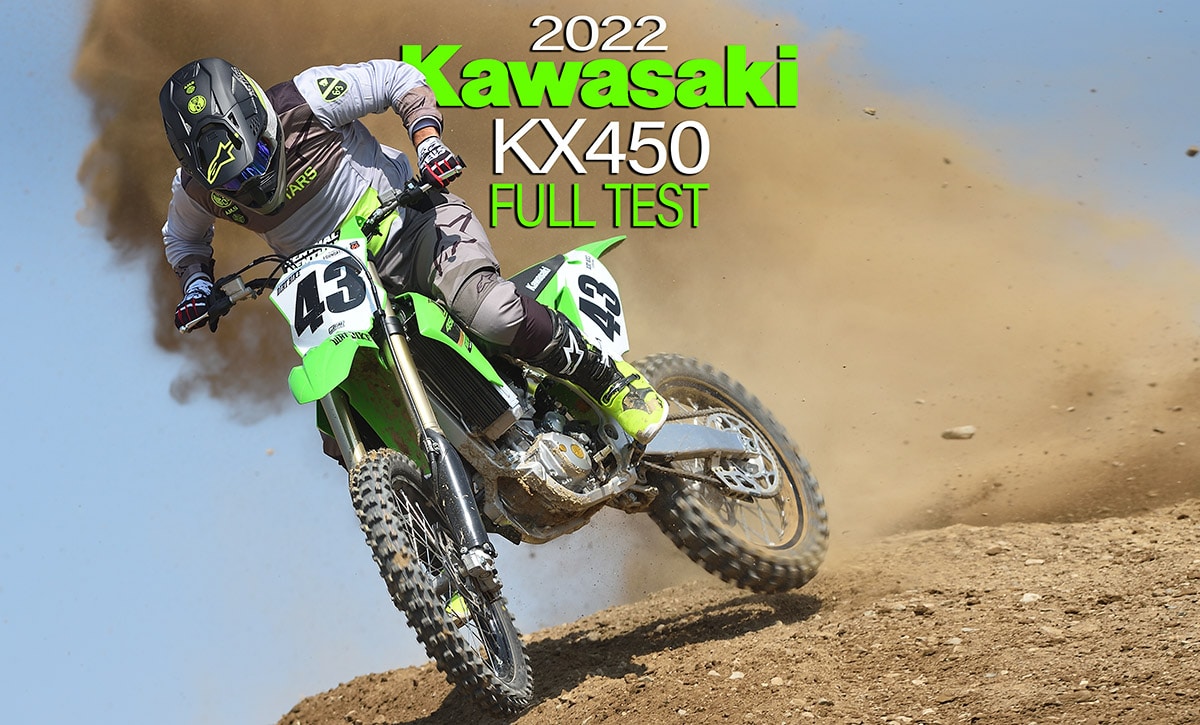 Success often knocks on the back door. That’s how the Kawasaki KX450 arrived. While Honda, KTM and Yamaha have taken turns bashing the front door down with one 60-horsepower battering ram after another, Kawasaki has quietly taken a more conservative route. The KX450 has never been the fastest bike in the class. It has never been the lightest, the most sophisticated or the most groundbreaking. What it has been is successful.

Beyond Eli Tomac’s championships in Pro motocross, the KX450 has an impressive reputation among privateers and a record of shootout wins. It has won the Dirt Bike magazine 450 shootout for three years in a row and is often a favorite among staff members and test riders. The 2022 version of the KX450 has arrived unchanged. In typical Kawasaki fashion, that was a conservative move. And, in view of the bike’s record, it was probably a very smart one.

AFTER THE REBIRTH
Kawasaki has generally taken the wait-and-see approach to making big changes. The one exception was 2019. That was the year Kawasaki engineers were given the green light to do a drastic redesign. The bike had been so conservative for so long that it had fallen off the radar, while the KTM, Husqvarna, Honda and Yamaha were each taking turns as the wonder bike of every successive year. Riders still loved riding the KX, but no one wanted to talk too much about a kick-start-only bike that had looked pretty much the same for 10 years.

That 2019 model was clearly a radical step for Kawasaki, but most of its big-news features had already been presented and accepted elsewhere. Electric start wasn’t anything new. The hydraulic clutch might have been the first on a Japanese motocross bike, but on European bikes, they were the norm. Kawasaki got a little more daring with the valve train design. Many smaller motors had turned to the use of finger-followers between the cams and the valves. This lightened the reciprocating valve mass and allowed engineers more freedom for valve placement. That can translate to higher revs. Did a 450 really need to rev any higher? No, but as it turned out, the KX450 responded well to that arrangement.

In 2020 and 2021, Kawasaki gave the bike minor refinements. The most interesting of those was the redesign of the clutch last year. It adapted the use of a coned disc or Belleville spring. Again, this wasn’t anything new for European bikes, but it was the first for Japan. And, in a fit of drunken rowdiness, the designers dumped the 7/8-inch handlebar for a Renthal Fatbar, a move most other manufacturers did 10 years earlier. The KX still uses a 49mm Showa coil-spring fork with a DLC coating on the lower tubes. The brakes are still Nissin with a 270mm front rotor and a rear rotor that was reduced in size last year. Adjustability has always been a strong suit for the KX450. There are four possible handlebar-mounting positions offering 35mm of range, and there are also two different footpeg-mounting positions.

WHY IT WORKS
The end result is a bike that doesn’t really stand out in any single category but excels as a package. On the dyno, the 2021 KX450 peaked with 55.23 horsepower at 9290 rpm. Of the seven bikes in the 2021 450 comparison, it placed sixth in terms of power quantity. In terms of power quality, it was one of the best. Let’s be real; very few riders can use the power of a modern 450. With the KX’s valve train, the motor could theoretically rev as high as a modern 250F, which is around 14,000 rpm, yet it peaks in the 9000-rpm range. Kawasaki did this on purpose. The power delivery is flat and smooth without any sudden surge or big hits. That isn’t to say it’s boring. The Kawasaki has very good throttle response and a certain willingness that increases the fun factor. In terms of mapping, there are no real glitches. This bike rarely stalls, it doesn’t pop or backfire, and it always starts easily. 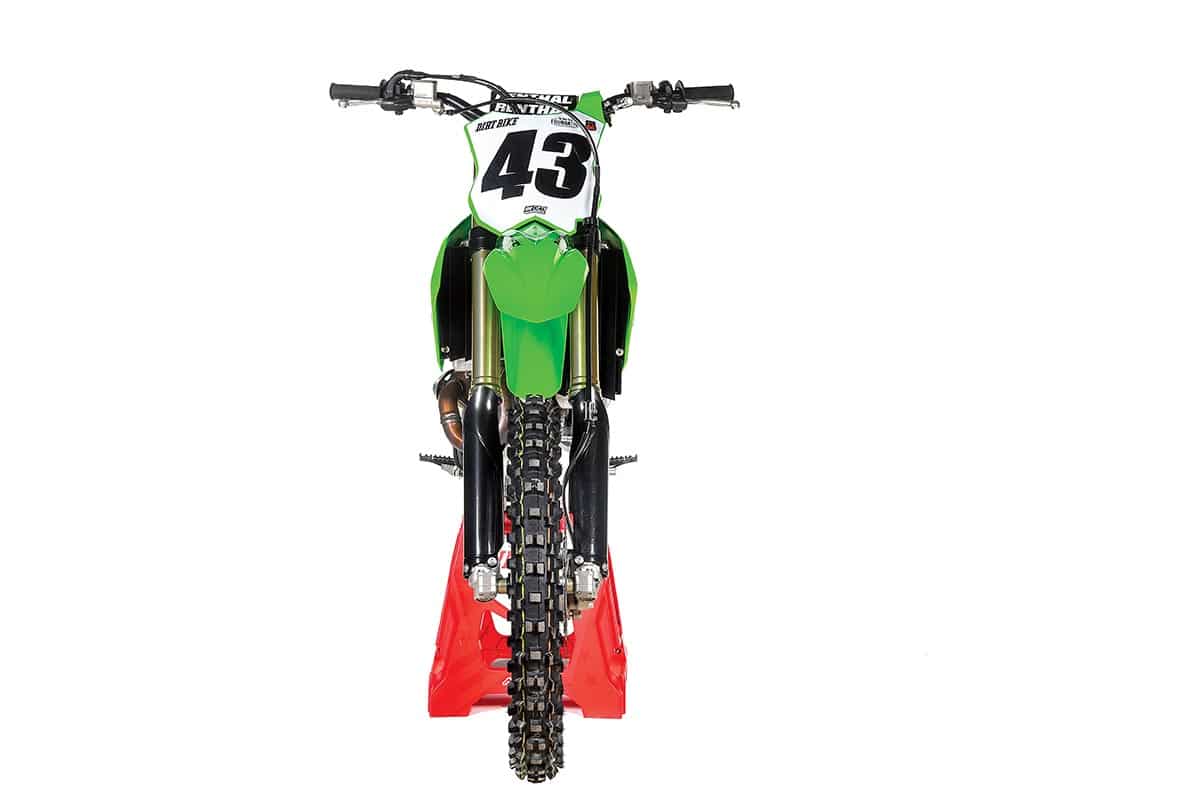 There are still three couplers that come with the bike, and that allows three mapping options. The green one is stock, the white one increases the hit slightly (but doesn’t have any effect on peak power), and the black one is a little richer and smoother. Most riders like the white coupler best, but it does add a slight amount of raspiness. This system has been in place for a long time and is a little clumsy compared to newer technology coming from other manufacturers. Kawasaki also offers a handheld mapping device for $700. If you do feel the need to change your mapping, it’s more practical to turn to the aftermarket for help. Companies like Twisted Development have developed maps they can download to your stock ECU. If you go in search of more peak power through increases in compression, you probably should check into that. For us, we love the stock power delivery and wouldn’t do anything to risk it.

Smooth power is only half of the KX’s formula. That combines with a very stable overall handling platform to make the bike a real sweetheart. Kawasaki has resisted the temptation to develop quicker steering manners. That’s often a band-aid to cover up excess weight. The KX isn’t especially heavy, but it’s no feather, either. At 234 pounds without fuel, it’s more or less in the center of the class, and that’s good enough. The KX is a very well-planted bike with excellent front-end bite. When you pick a line, it holds its course. You might not be able to cut and slice like you can on a KTM, but that’s mostly because the KTM is freakishly light.

Suspension gets some of the credit for the KX’s pleasant personality. The Showa fork and shock are excellent. They have good manners in small chop and still keep the big hits under control. Unlike many other bikes, the Kawasaki gives you a wide range of usable adjustment. The factory recommendation for race sag is 100mm to 105mm, but this isn’t one of those bikes where you have to run the exact setting or else. For tight tracks, you can easily add more preload without the risk of head-shake or knifing the front wheel. For faster tracks, we like a little more sag in the rear—as much as 110mm. If that makes the front end feel too high, drop the clamps a little. The Kawasaki is like a blank canvas that’s okay with whatever you paint. 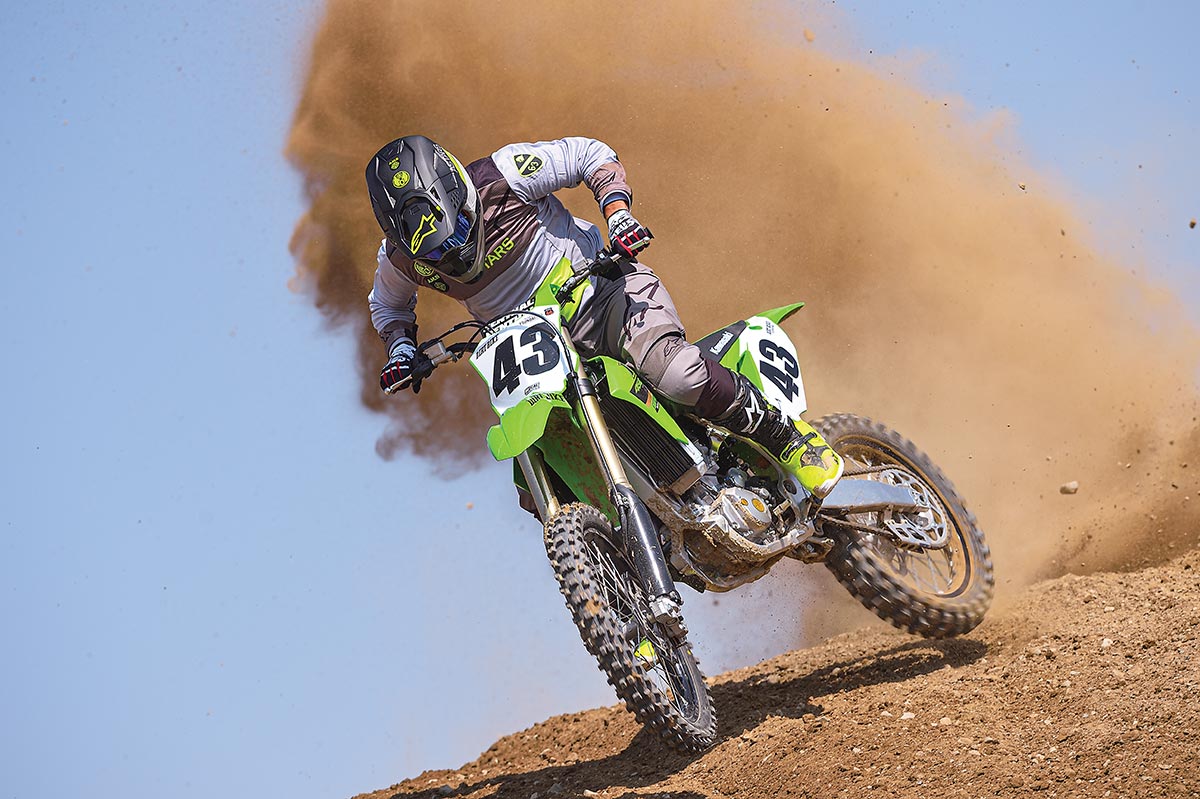 PICKS AND PARTS
Now that we have a year on the new clutch, we are completely on board. Initially, the super-light pull was a concern; it seemed like it would encourage overuse and a shorter lifespan. That wasn’t a valid issue. We still have a few minor complaints. The muffler is too loud. The rear brake is a little grabby. The seat foam breaks down quickly. The grips are short and hard—stuff like that.

We aren’t too worried about major reliability issues. Top-level pros like Eli Tomac and Zach Bell have had high-profile failures. But, at the risk of being offensive, we’re guessing you probably aren’t Eli Tomac or Zach Bell. For long races, we have learned to use a high-quality synthetic oil and run slightly more than the recommended capacity. It turns out that the Kawasaki is pretty bulletproof in the hands of the average joe.

Will it be able to stay on top of the class for another year? For 2022, we haven’t seen too many changes in the 450 class. Honda made some mid-year updates to the CRF450R. Yamaha has a new rear wheel, and there are a handful of reliability-related updates on the Austrian brands. That’s good news for Kawasaki. Staying on track is the most direct path to success—as long as you’re on a good course to start with.

A PRO MECHANIC’S KTM DUAL-SPORT: BEHIND THE BUILD