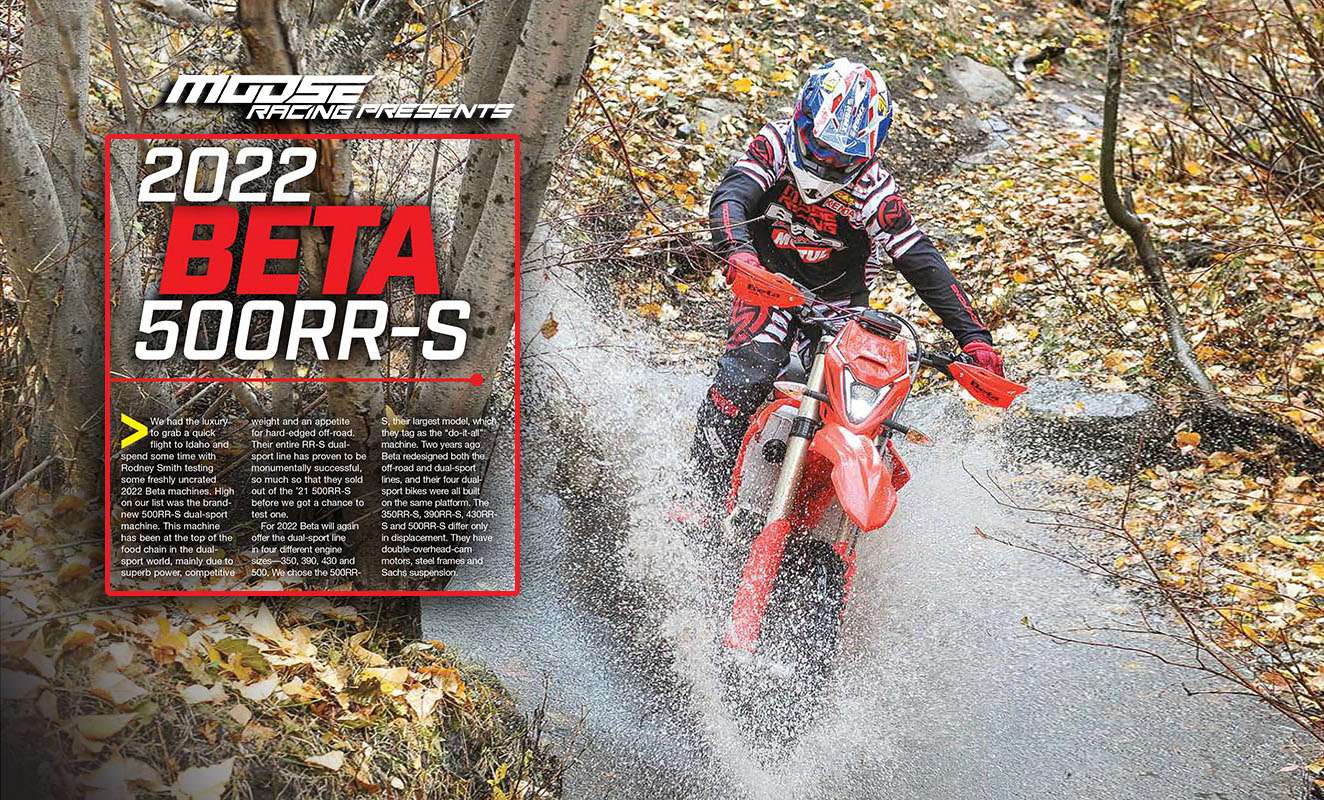 We had the luxury to grab a quick flight to Idaho and spend some time with Rodney Smith testing some freshly uncrated 2022 Beta machines. High on our list was the brand-new 500RR-S dual-sport machine. This machine has been at the top of the food chain in the dual-sport world, mainly due to superb power, competitive weight and an appetite for hard-edged off-road. Their entire RR-S dual-sport line has proven to be monumentally successful, so much so that they sold out of the ’21 500RR-S before we got a chance to test one.

For 2022 Beta will again offer the dual-sport line in four different engine sizes—350, 390, 430 and 500. We chose the 500RR-S, their largest model, which they tag as the “do-it-all” machine. Two years ago Beta redesigned both the off-road and dual-sport lines, and their four dual-sport bikes were all built on the same platform. The 350RR-S, 390RR-S, 430RR-S and 500RR-S differ only in displacement. They have double-overhead-cam motors, steel frames and Sachs suspension.

The Beta engineers moved the crankshaft rearward and the clutch upward to centralize the rotating mass. The 500 (478cc) is fuel-injected, a six-speed, has separate compartments for the engine oil and transmission oil, and is electric start only. For 2022 they have fit the 500 with a new ECU, which targets smoother power, and a diaphragm clutch which provides a lighter clutch pull while offering more progressive control. Both engagement and disengagement have been improved, as has the clutch pull in the hydraulic unit. There three spring options for the new diaphragm clutch.

The chassis and bodywork had been revamped, with a serious diet being the catalyst back in 2020. Once again, Sachs suspension components are used on the RR-S line. The fork has received new valving settings, with the target being plusher without sacrificing stability. All the settings on the fork are adjustable without tools. They now use a different-colored fork tube with a new anodizing process, and this hardened the surface and makes them more resistant to corrosion. Out back, the Sachs rear shock has new compression-damping settings with independent high- and low-speed damping circuits, which let the rider adjust both separately.

Although the fuel tank is smallish at 2.4 gallons, fuel economy is stingy via the dual injectors and fairly lean mapping. The exhaust note is soft for an off-road machine, but definitely commands a higher decibel rating than any of the Austrian dual-sporters. It has a nice heat shield, the thin saddle is removable via a push button (this is sano!), air-filter access is quick with a pop-out side panel and the battery is a lightweight lithium unit that is quite powerful.

Both fore and aft braking systems are Nissan, the tires this year are Maxxis DOT Enduro and the gearing is a tall 15/48 combo. The chain is an O-ring unit, the swingarm has black coating on the top and bottom that is nothing more than a style feature, and a tight-fitting skid plate protects the frame rails and center cases, along with a bit of armor for the water pump and ignition.

Beta fit the 500 with a new LED light with a redesigned mask that increases the brightness and reduces the voltage requirements. The handlebars are a bulge design (no crossbar), the grips are comfy, the levers adjustable and the CNC-machined triple clamps have several adjustments up top for handlebar positioning. It comes with handguards—shields, really—and two mirrors that are street-oriented and instant frisbees for the serious dirt pilot.

POINTED OFF-ROAD
Starting is a brutal affair if poking a button seems stressful. It fires quick, and following a brief warm-up, you snick it into gear and point your nose towards anything dirt. It’s geared quite tall—fine for the pavement but way too tall for any serious off-roading. Most of the resolute Beta 500 guys run 14/50 (remember 15/48 is stock). Beta does ship the machine with a 13-tooth unit, and this, too, tightens up the gearbox so there’s no huge gaps. In standard trim you’re always caught in between gears and are either forced to rev it out or lug it, and this can dicey and bring on inopportune stalling. Once re-geared, you’ll find that the 500RR-S makes strong, clean and broad power. It will pull a taller gear, which frees up the suspension and helps maintain traction. We did get a chance to ride Rodney Smith’s personal 500, which was geared 14/50 and ran an FMF 4.1 muffler with the stock ECU settings, and all facets of the muscle factor improved considerably; food for thought.

In the suspension department, the Sachs dampers need some break-in time. Not tons, but the first hour or so they’re thick and stiff. With more time they move better, smoother and are quite adept in the trail world. Our average-sized testers never played with the front preload adjusters, added some fork compression after a full day’s ride and relaxed the rear rebound during the initial rides. Once the shock got some time on it, the action improved and the machine did a fine job of chewing on decent trail hack, roots and rocks, and only winced on big whooped-out trails with speedier G-outs. Overall, the suspension targets the machine’s intent—trail riding, woods navigating and exploring off-road. If high-speed desert racing, GPs or moto is your fix, plan on getting them valved for the conditions.

The machine’s handling habits are svelte and precise. There’s not a lot of turning radius (when going lock to lock with the bars), but the machine corners with normal input, has good stability at speed, and feels neutral and balanced. It weighs in at around 245 pounds (no gas), and this is very competitive in the high-end dirt-oriented dual-sport world.

The riding compartment is tight, meaning the pegs feel tall, the seat low and the bars back. Shorter to average riders can adapt, but taller riders need to make some changes. We fit on some Fastway Air EXT footpegs, which have adjustable height, and ran them in the low and back position. Seat Concepts has a taller saddle (still not tall enough for the long-legged or bad-knee crowd), and we moved the bars forward on the triple clamps and put spacers under the bar perches to raise them up. This helped hugely!

It took some time for the gearbox to break in, being tight during the initial ride. We had trouble finding the shifter until we went to the lower Fastway peg, and the Maxxis DOT rubber grabbed well in the Idaho soil. Loved the Nissan brakes, love the Trail Tech Voyager, which is a GPS, total mileage, trip mileage, engine temp and hour meter and give top marks to the hydraulic clutch in both feel and engagement. We never lost a blinker, or the low hanging rear taillight, and didn’t have anything rattle or loosen during our test time.

Price-wise the Beta 500RR-S comes in at $11,299—a stiff pill to gargle with, but it goes down easy if riding your dirt bike from your house to the hills and attacking challenging off-road is your drink of choice. This machine is definitely in the elite status of hardcore dual-sport machines.   www.betausa.com