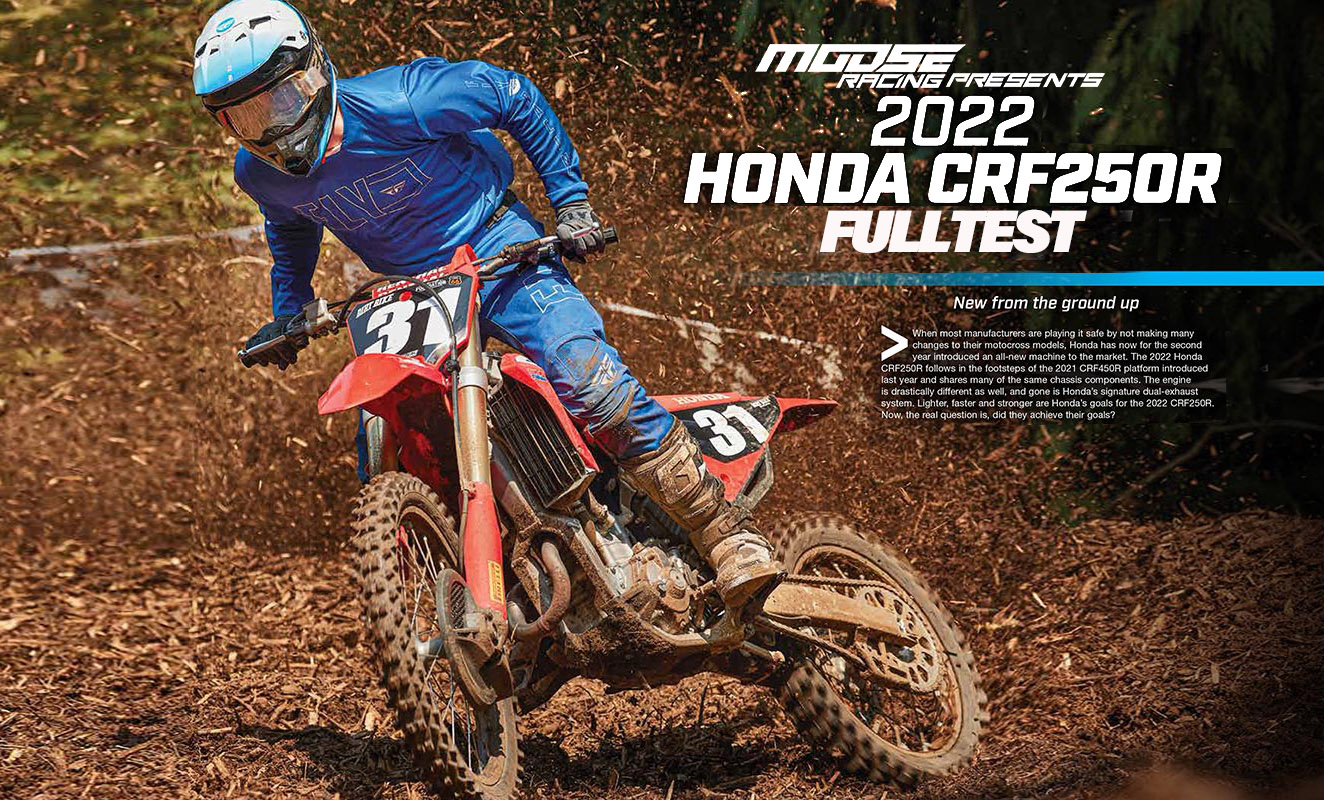 When most manufacturers are playing it safe by not making many changes to their motocross models, Honda has now for the second year introduced an all-new machine to the market. The 2022 Honda CRF250R follows in the footsteps of the 2021 CRF450R platform introduced last year and shares many of the same chassis components. The engine is drastically different as well, and gone is Honda’s signature dual-exhaust system. Lighter, faster and stronger are Honda’s goals for the 2022 CRF250R. Now, the real question is, did they achieve their goals?

In a word, everything. Honda was the only major Japanese manufacturer to use a complete dual-exhaust system on their production MX bike in the past, but for 2022 that is all history, saving weight right off the bat. The exhaust system now utilizes a single straight exhaust port that is designed to improve low-end torque. The single muffler has internal baffling to further increase low-end torque. The single exhaust header is now routed 74mm closer to the engine on the right side.

ENGINE
The 249cc, liquid-cooled, single-cylinder, double-overhead-camshaft, four-valve engine design features an updated air intake and revisions to the valve timing. Changing the shape of the airbox has increased its capacity by 78 percent, primarily on the clean side of the air filter. The fuel injector’s lean angle is increased 30 degrees, enabling the spray to reach farther back of the butterfly, and the throttle bore is 44mm.

Beside eliminating an exhaust port, Honda made major changes to the head. Titanium 33mm intake and 26mm exhaust valves are once again utilized, but now the intake valves feature dual springs (one inside the other) to ensure precise movement at higher revs. The intake camshaft sprocket is now press-fit, which improves valve-timing accuracy while reducing weight.

The camshaft holder has a more rigid design to maintain camshaft-journal roundness, while the rocker-arm shaft alignment was also redesigned for improved oil supply at higher rpm. Carrying over from 2021, the bore and stroke are 79.0mm and 50.9mm, respectively, and the compression ratio is 13.9:1, but the piston and connecting rod shapes have been modified for improved durability. Also, the water-pump gear is thicker to increase strength.

For 2022 the clutch pack now has nine discs instead of eight, which increases the amount of disc-friction material and lowers the load on the individual discs. The clutch basket is made more rigid for added durability, and an additional friction spring reduces spring load. The primary ratio is now lower—3.047 versus 3.473—and lever pull is lighter.

Inside the five-speed gearbox, changes were made to reduce friction and uses only one shift fork for changing gears (rather than two, like previous). Rigidity in the counter shaft was increased, while the shift drum was lightened.

CHASSIS
The all-new frame shares many similarities to the 2021 Honda CRF450R model with a wheelbase that is now 10mm shorter (at 58.1 inches), rake is relaxed by .02 degrees (to 27.32º), trail remains at 115mm, the seat height is unchanged at 37.8 inches, and ground clearance is increased by 3mm (now 13.1 inches). The subframe also resembles the CRF450R model, allowing room for the new air/intake system. Honda claims a weight savings of over 2 pounds with the new main frame and subframe.

Showa suspension components are used with a 49mm leading axle and an inverted telescoping fork up front, while the signature Honda Pro-Link rear suspension has been revised with new ratios utilizing a Showa fully adjustable shock.

Honda is the first Japanese manufacturer in the USA to come equipped with Pirelli Scorpion MX32 tires stock. These tires are designed for soft-intermediate terrain use, just like the previous year’s Dunlop MX33s and are widely used in Europe’s GP racing scene.

ON THE TRACK
The 2022 Honda CRF250R package is far more refined than the 2021 Honda CRF450R version we received late last year, even though it has lots of similarities chassis-wise. When it comes to engine performance, there’s a noticeable increase throughout the power curve. Low-end power comes on smooth without producing a surging feel and pulls a lot stronger through the midrange and has good top-end revs, just like previous years. The power is easier to tap into now without having to clutch it down low while trying to keep the rpm revved high. The reduction in weight is noticed almost immediately. This bike is definitely lighter to the tune of almost 10 pounds under last year’s model.

Dirt Bike’s entire staff of test riders agree this bike is easy to throw around in the air and on the ground. The elimination of the dual exhaust makes the bike feel slimmer, especially towards the rear of the machine, and the new styling lines make moving around in the rider cockpit easy without any major hangups. Honda’s handlebar-mounted switch maps change between three pre-programed maps fast and easy. The standard map was well-received by most, but it’s nice to have options, especially when there are noticeable differences between all three programmed maps. Overall, the 2022 Honda CRF250R is a definite improvement over the 2021 model and is going to make testing interesting during Dirt Bike’s “2022 250cc Four-Stroke Shootout.”