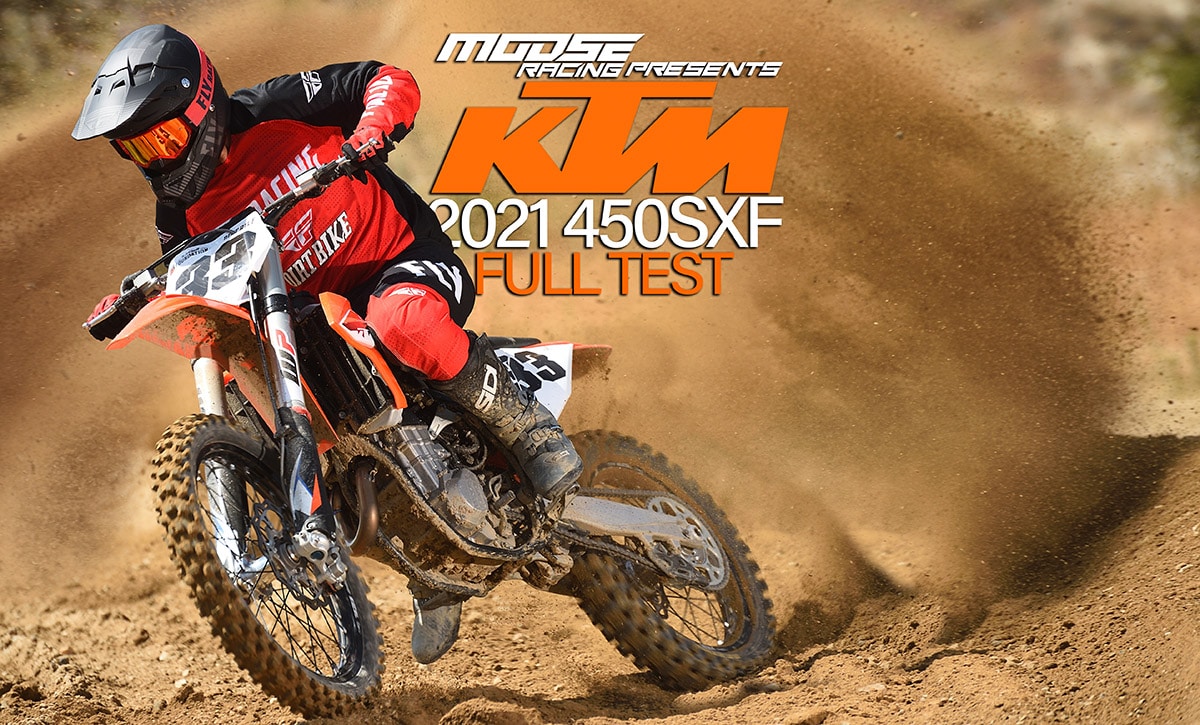 If there’s any one bike that can sum up all the changes that have occurred in the motocross world in the previous decade, this is it. The KTM 450SX-F is the MX poster child of the 21st century. It hasn’t always been the fastest, the most advanced or the best in its class, but it has consistently been the bike to beat and the one that most influences all the others.

You can pin down the beginning of the 450SX-F era to the Factory Edition of 2012. That was when KTM came up with this particular configuration, and the formula hasn’t changed much since then. Some years there have been more changes than others, though, and the last major redesign was in 2019. That was when it got a more compact head, a new frame and new bodywork. The 2020 and 2021 models featured subtle refinements, but the overall theme has been the same for the last nine years. It has been the lightest bike in its class, and it has had one of the smoothest, most powerful motors. That’s a pretty good formula.

SELECTIVE ATTENTION
There are certain characteristic traits and designs that set the KTM apart. It still has a steel frame. It still has a single-overhead-cam motor. It still has a hydraulically actuated clutch with a Belleville-type spring. All of those items used to be very unusual in the motocross world, but one by one, other bikes are looking more and more like KTMs.

It would be easy to dismiss this year’s changes as minor. The 2021 model looks the same aside from a new orange, black and white pattern on the shrouds. KTM concentrated almost entirely on suspension changes for 2021. The fork is still a WP Xact AER 48 air fork, but there have been a number of changes internally that, essentially, make it a different fork. It has a new mid-valve, a different bottoming system (neoprene instead of hydraulic) and a bunch of smaller items, including a rebound clicker that needs no screwdriver. Most suspension tuners say that the mid-valve is a long overdue game-changer for WP. All this was first previewed on the Factory Edition, although the production 2021 model still has more valving changes, simply because WP engineers have had more testing time since the Factory Edition was introduced. In the rear, the bike has the same linkage and shock as last year, although valving has changed. The linkage seals have been changed and have less drag as well.

There was another update that came on the Factory Edition, but we didn’t know about it at the time. The 450SX-F is now compatible with a smartphone app that allows you to change the mapping via a Wi-Fi connection. If you are familiar with Yamaha’s Power Tuner, you already know what to expect. The biggest difference is that the KTM doesn’t come with the transmitter pre-installed. You have to buy it separately, whereas every Yamaha sold already has that hardwired in place. As of right now, the transmitter isn’t available in the U.S., but when it arrives, we will experiment extensively and report back. For right now, KTM made some changes to the existing maps that are pre-installed. You can still cycle through settings one and two with the handlebar-mounted multi-switch. You can also use it to select traction control and launch mode.

LITTLE BIG CHANGES
If you remember the 2020 Dirt Bike 450MX shootout, as well as all the other shootouts that popped up virtually everywhere, they mostly said the same things about the KTM. The common element was that suspension was the bike’s biggest shortcoming. It wasn’t like the old days when the KTM was virtually disqualified by having an archaic fork and shock; it simply wasn’t as comfortable as the Japanese 450s. Now, things have changed. The new version of the Xact air fork has a very different feel. It’s still an air fork, though. If you have already decided that you don’t like air, there’s little that can be said to change your mind. For us, however, the use of air was never what held the KTM back. It was the bike’s performance on small chop and square edges. It simply didn’t provide much comfort, and now that’s where all the improvement is for 2021.

The new KTM is downright cushy. It still does a good job on big impacts, and it still holds itself up in the stroke. And yes, you can still tell it’s an air fork if you’re sensitive to that particular feel. WP engineers were careful to explain that their goal wasn’t to make the AER series feel indistinguishable from coil-spring forks but rather to allow it to evolve in its own direction. Air critics will still talk about the fact that the fork has a tendency to rise after its initial compression when you enter a turn.

Coil-spring forks do that, too, just not quite as freely. Critics can also continue to complain that the fork gains pressure on hot days. We are in the middle of a heat wave in Southern California, and we can see a 10-pound increase in air pressure from morning to race time. You have to check it several times in the course of a day. You also have to bleed the outer chamber, just like you do with a conventional fork. On the track, though, the 2021 WP fork has a vastly improved feel.

Without that to occupy our attention, we focused more on the rear suspension. The shock still rates well, but we found ourselves making subtle changes in the preload and compression damping just to change the attitude of the bike. In general, almost all riders liked around 105mm of race sag and less compression damping. Reductions in high-speed compression seemed to give us good results—as much as a half turn.

KTM STANDARD ISSUE
All of the other things we love about the KTM are still in play. It has a super-wide powerband and a smooth delivery. We did most of our testing with the vented airbox cover in place, which comes with the bike. That’s good for just a touch more snap down low. Do you need more snap? Some people might. If you come from a Honda or Yamaha, the 450SX-F might feel a little sleepy. Both of those bikes hit harder and have just a little more overall power. Most people agree, though, that the smooth nature of the KTM is one of its biggest assets. Map two now is more aggressive than it was in 2020. It doesn’t affect throttle response as much as giving it a little more power in the middle and on top.

Overall handling is still a strong point for the bike. Yes, it’s still the lightest bike in the class at 223 pounds without fuel. Beyond that, the KTM has evolved into a truly good-handling bike without any true shortcomings. It’s both agile and stable. In the past, we thought the frame had become a little too rigid to favor Supercross-style riding. With the improvement in suspension for this year, we no longer get that impression. While we’re talking about KTM things we love, the clutch has a good feel and has proven to be super durable; the Brembo brakes are excellent; and all the parts—from the Neken bars to the Excel rims and the Dunlop MX33 tires—are top-notch.

The KTM 450SX-F has been the primary force moving the motocross world forward for a very long time now. That won’t change any time soon. We can’t yet say if it will be the best choice of all 2021’s offerings, but we can say this: it won’t be the wrong choice.