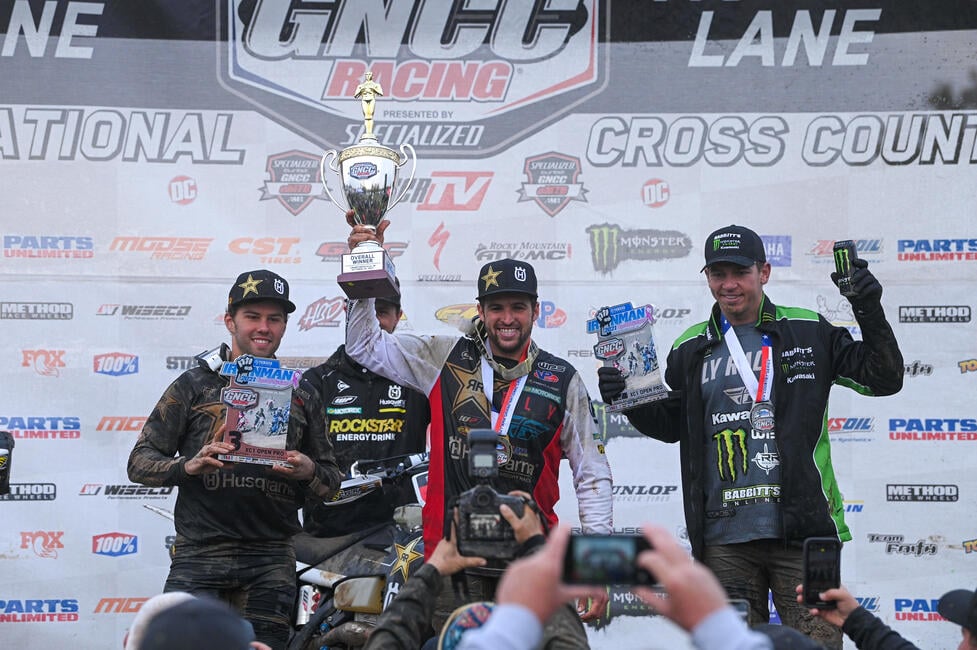 Once again the close to another year of GNCC is here, the final round of the 2021 racing season was held in Crawfordsville, Indiana at the famed Ironman Raceway. With a record number of racer on hand for the event and the XC1 championship on the line Mother Nature decided to make it interesting with rain showers throughout the day. Below is the complete race report with photos from Ken Hill:

With the XC1 Open Pro riders lined up, the stage was set for the 2021 GNCC National Championship battle. With the rain tapering off, the green flag was ready to wave for the final race of the 2021 season, and the battle between FMF/KTM Factory Racing Ben Kelley and AmPro Yamaha’s Steward Baylor was one that everyone had their sights set on watching.

As Ricky Towery threw the green flag it was the No. 212 Coastal GASGAS Factory Racing’s Ricky Russell grabbing the $250 All Balls Racing Holeshot Award. However, it would be the Babbitt’s Online/Monster Energy/Kawasaki Team Green’s Josh Strang coming through the finish line first on the opening lap with Rockstar Energy Factory Husqvarna Racing’s Thad Duvall behind him in second.

Duvall’s teammate, Trevor Bollinger found himself running at the front of the pack on lap one as he came through third in XC1 with their other teammate Craig DeLong racing through in fourth. All eyes continued to search for the No. 514 and 530 to see who would emerge first, but both seemed to have some bad luck on the opening lap as they came through out of the top 20 overall.

Bollinger would make his way into the lead on the second lap with Strang and Duvall coming through behind him in second and third. Unfortunately for Bollinger and Russell, who had grabbed the holeshot, they would be unable to complete lap three as their machines were succumbing to the weather conditions.

Lap three saw Strang move back into the lead position with Duvall just five second behind him. DeLong had moved back into third in XC1 while FMF/KTM Factory Racing’s Ben Kelley had become a man on a mission as he made his way back into the top 20 overall racers and sat fourth in XC1. AmPro Yamaha’s Steward Baylor had found himself in his pits for a clutch swap and was trying feverishly to make up time and ground on his competition. Kelley’s teammate Josh Toth found himself running fifth by lap three, but his motorcycle would sadly be unable to finish the race.

As the leaders came through to the white flag, Strang continued to lead with Duvall now just six seconds behind him and one lap to go. Strang and Duvall would continue to battle back-and-forth throughout the last lap, with Duvall making the pass for the lead.

Duvall would make his way to the finish line to earn his first win in almost two years at the season finale in very unfavorable conditions. Strang would come through to earn second as DeLong held on to earn his first XC1 Open Pro class podium.

As Kelley came to the finish, revs filled the air as he had battled his way up to ninth overall, fourth in XC1, making him the 2021 GNCC National Champion. Kelley had earned three overall wins this season, with seven other overall podium finishes on the year as he remained a consistent and constant threat to his competitors.

For Baylor, he would finish sixth in XC1 with a 65th overall finishing position after completing three full laps in what had seemed to be one of the muddiest season finales the series has seen in quite some time.

Unfortunately for Magna1 Motorsports/Husqvarna’s Jordan Ashburn and AmPro Yamaha’s Layne Michael they would start the day but be unable to complete a lap of racing as they suffered mechanical issues.

After coming through sixth on the first lap in the XC2 250 Pro class, Babbitt’s Online/Monster Energy/Kawasaki Team Green’s Lyndon Snodgrass would put his head down and ride smart through the grueling conditions. Snodgrass would move into the lead on the second lap and hold that position until the checkered flag flew. Snodgrass also found himself running third overall on the day, making his way onto the overall podium at round 13.

Phoenix Racing’s Cody Barnes made his way onto the podium once again in Indiana as he came from an eighth place start to second in the XC2 class. Barnes would continue to make the necessary passes and ride a steady race to move into the podium position.

Rounding out the top three in XC2 was Coastal GASGAS Factory Racing’s Ryder Lafferty. As the race continued, Lafferty found himself working his way back up from the fifth place position. Lafferty made his way back to third and would hold onto earn his second podium finish of the season.

In the FMF XC3 125 Pro-Am there was a new winner as Podium Works/ODI Grips/Scott Goggles’ Shawn Myers Jr emerged as the class winner after battling back from a fifth place standing on lap two. Myers would sit second as the white flag came out and would make the move into the lead once again after earning the $100 Lojak Cycle Sales’ holeshot award. Myers crossed the line six minutes ahead of his competitors.

The GASGAS-backed rider, Michael Pillar would battle back from a fifth place start to earn second in the FMF XC3 class, while MX Tech Suspension/Tely Energy/Moose Racing’s Hunter Neuwirth would finish third in the class after battling back-and-forth for the top spot.

In the second amateur race of the day at 10 a.m. all eyes were on the WXC line as BABS Racing Yamaha/Fly/Maxxis/Pro Circuit’s Becca Sheets and AmPro Yamaha’s Rachael Archer were set to battle for the 2021 WXC GNCC National Championship. As the race got underway it was Archer setting the pace in the lead position. Archer would continue to push throughout the three lap race as it was cut short due to weather conditions. Archer would lead start to finish, crossing the finish line with a considerable gap between herself and the rest of the competition.

Team Green Kawasaki/Babbitt’s Online-backed rider, Korie Steede had made her way into the second place position after battling back in third. Steede made a last lap pass to make her way to second in the WXC class.

BABS Racing Yamaha/Fly/Maxxis/Pro Circuit’s Becca Sheets would come through in second on the opening lap but would find herself battling throughout the second lap as she came through in the fourth place position. As the white flag flew Sheets would put her head down and push for that last podium position and point needed to clinch the National Championship. As the crowd waited at the finish line, Sheets would emerge in third and lay claim to the 2021 WXC National Championship.

At the conclusion of the 8 a.m. amateur 1 race it was the 250 C Schoolboy (14-17) competitor, Gabe Day taking the overall win in muddy conditions. Joshua Webb came through to earn second overall, and his fourth win in the Warrior class. Brady Robbins rounded out the top three overall finishers and earned second in the 250 C Schoolboy class. Zachary Rohr and Sam Stamper rounded out the top three Warrior class finishers on the day.