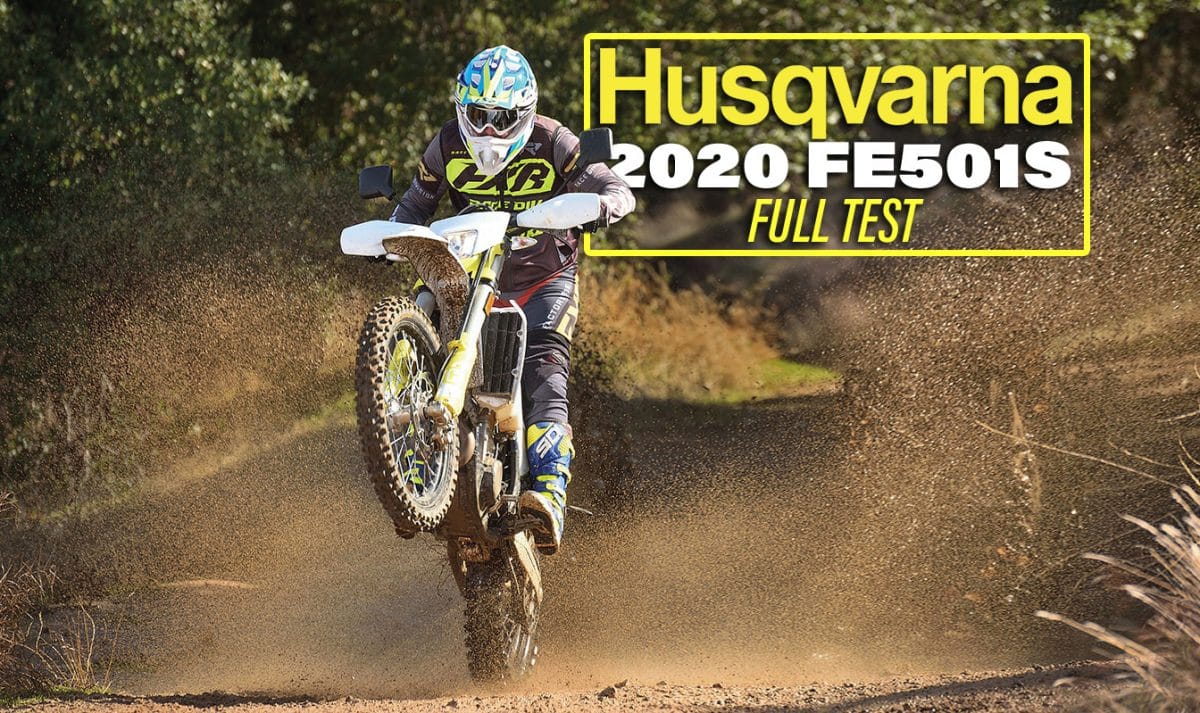 Despite the best efforts of regulators, the 2020 Husqvarna FE501 dual-sport is a better overall performer than anything that has come before it in the dual-sport world. That’s an amazing testament to clever engineering and sheer stubbornness. 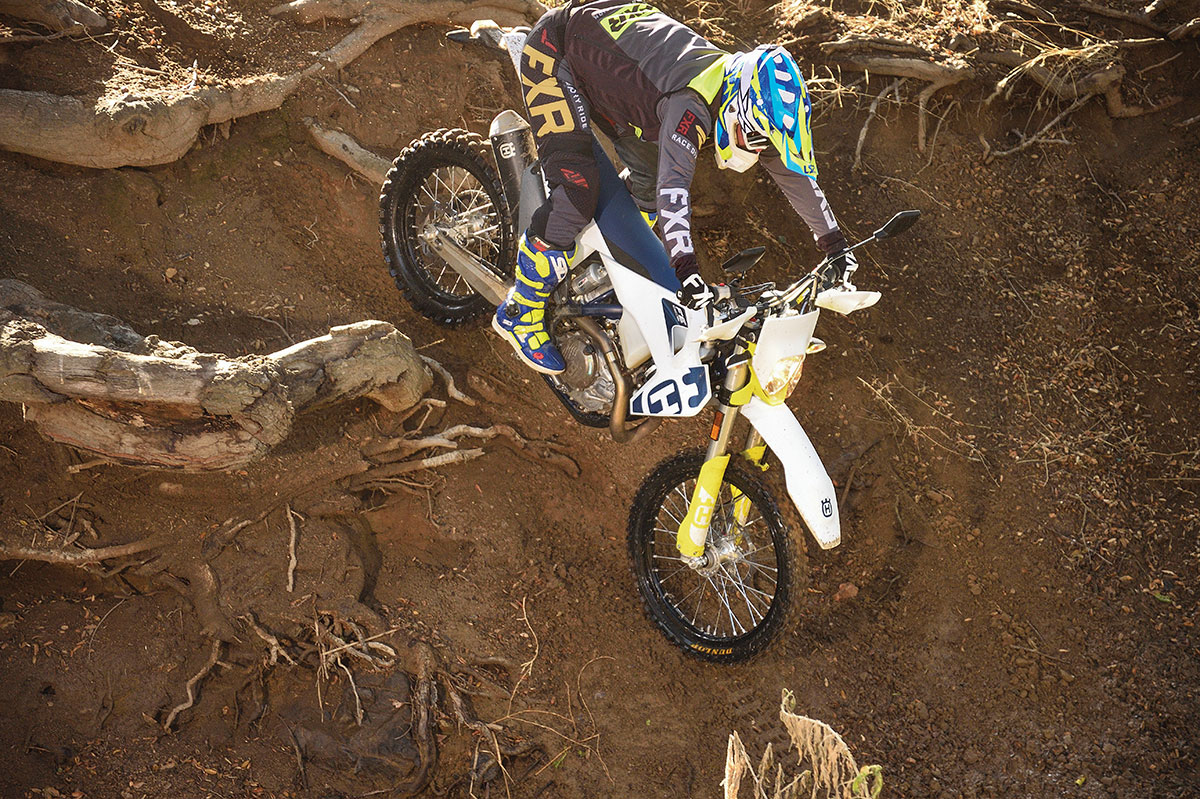 ALWAYS MOVING
For 2020, the Husky 501 has so many changes it verges on being a completely new motorcycle. This comes just three years after the last major redesign. The most obvious of these is a new look. The bodywork is pretty much straight off the 2019 Husky FC450 motocross bike. For that matter, so is the frame. That design originated on the 2018 Husqvarna Rockstar Edition and still uses a steel backbone, but it’s more rigid in all planes. The motor itself is new, too, although it uses the same basic design and layout. The head is much more compact, again taking inspiration from the Rockstar Edition. The biggest change in the lower end is apparent if you look at the left side of the motor. There’s no longer a provision for the addition of a kickstart lever. The lever and shaft had already disappeared, but Husqvarna engineers maintained the polite fiction that people might want to add the kickstarter after purchase. That pretense is now gone. 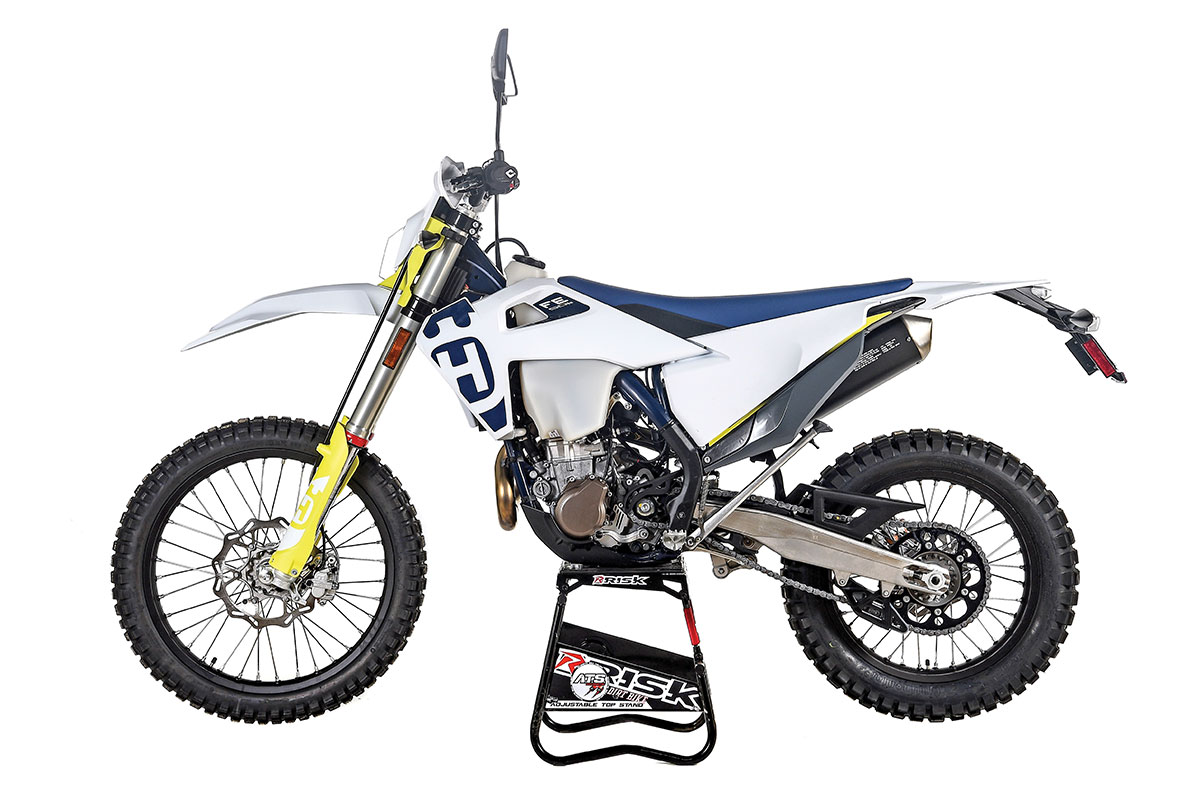 All of the engineering that went into making the 2017 model a real breakthrough in terms of EPA compliance is still there. That was the year that Husky and KTM went all out to make a bike that adhered to the letter of the law without cheats or substantive sacrifice in performance. Most of the work was done here in the U.S. The people involved said the hardest of the regulations to meet was the ride-by noise test. Apparently, exhaust wasn’t a big factor. Tire and intake noise were. They eventually looked to automotive technology for an answer. Cars and trucks often use a reed valve in the intake system to limit noise, so they installed the reed from a 125 two-stroke between the air filter and the throttle body. It worked, and they even say it resulted in an increase in low-end power. The Supercross team tried the same technology but eventually decided against it.

All of the chassis components have returned this year. The fork remains a WP Xplor 48 with two coil-steel springs. Even though you can always find some people who insist that the Husky and KTM are the same, there are quite a few differences between the FE501S and the KTM 500EXC. The Husky’s chassis is designed around a linkage rear suspension system, pretty much the same as the motocross version’s, whereas the KTM’s has a no-linkage PDS design. Beyond that, the Husky’s airbox is completely different, using a composite design that is integrated into the subframe. The Husky also uses Magura brakes and a Magura hydraulic clutch, whereas the KTM uses Brembo components. There are also different suppliers for the handlebar and the rims.

REINFORCEMENTS
Probably the biggest single criticism that the previous version of the Husky 501 faced was that it was supposed to fill in as a pure trail bike. Husqvarna had no dedicated dirt version of the bike. Word around the company was that the dual-sport model was so good on the trail that it was all anyone should want. That ignored the fact that dirt guys didn’t want to pay for all the DOT equipment. Now, however, there is a dirt-only version called the FE501 (no “S”). It meets less stringent noise and emission requirements and is $400 less expensive .

In truth, the FE501S was always a great trail bike, and it still is. Even in dual-sport trim, it has good power. Down low, in fact, the bike is awesome. It pulls from the basement up about like you would expect from a 500cc single, but it’s so quiet that you don’t always think it’s pulling. It’s amazing how the lack of noise plays with your perceptions. If you’re in the habit of riding with earplugs, you might already have experienced this. With the Husky, you get much more wind noise than motorcycle sounds. You pay a price for the super-quiet exhaust note in revs and top-end power, though. After all that low-end power comes a fairly flat midrange and an even flatter top end. Whether or not it bugs you is all about where you ride. When the bike is on tight trails, you never notice or care. When you ride on faster trails and fire roads, it can be an issue. You deal with it by short shifting and using that awesome low-end.

In the past, the biggest problem with clean and quiet dual-sport bikes wasn’t necessarily a lack of low-end power, anyway. It was the dreaded flame out. The single biggest achievement of the team that designed the Husky 501 is that they all but eliminated that issue. That enables you to actually enjoy the low-end power without fear of a cough-and-die scenario. You can certainly stall the bike if you try, but there are lots of dirt-only, unregulated four-strokes that stall more easily and more violently. The other problem facing EPA-lean mapping is hot-running temperatures. Husqvarna dealt with this the only way it could—the bike has a radiator fan. That’s somewhat effective, but it doesn’t prevent crazy-hot temperatures at the header and silencer. Be careful. 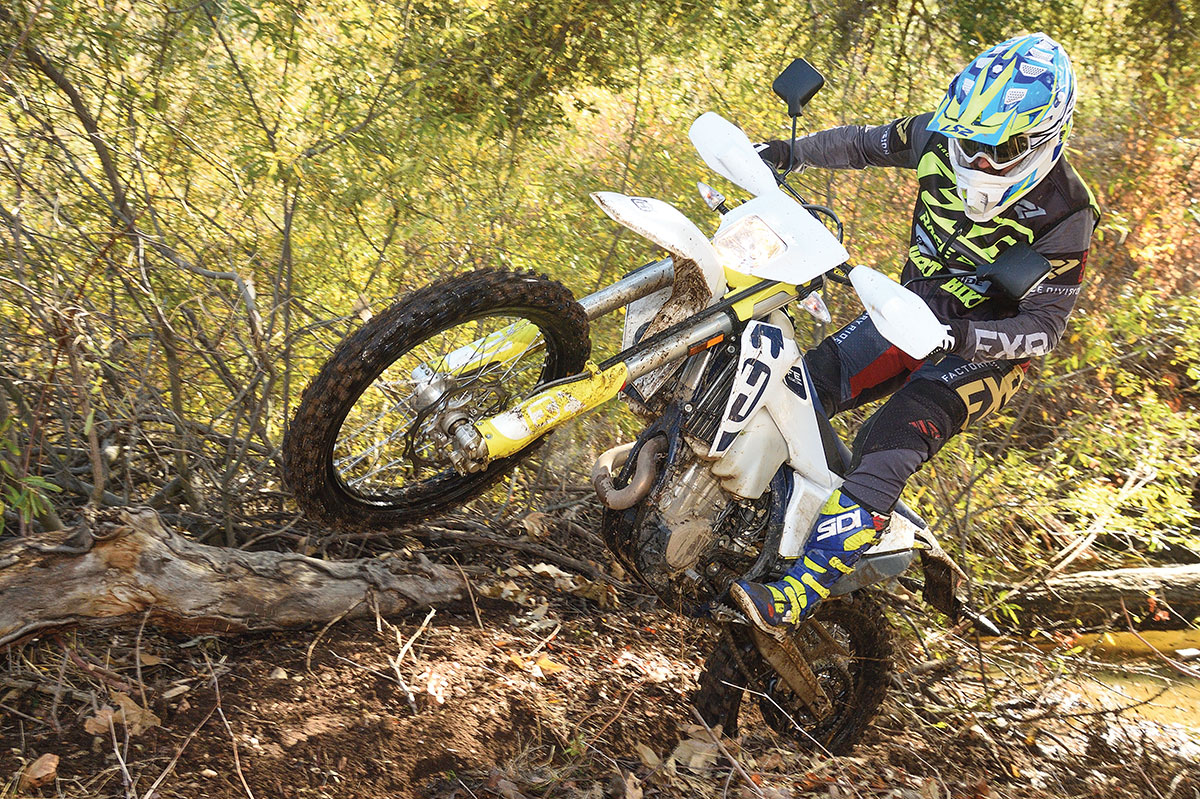 WEIGHT, OR A LACK THEREOF
On the Dirt Bike digital scale, the 2020 Husqvarna FE501S weighs 248 pounds without any fuel but with both mirrors. For readers of the print edition of Dirt Bike, be aware that there was a mistake in the March 2020 issue that placed the figure at 240 pounds. Regardless of that, the bike is light. For other comparisons, the Honda CRF450L dual-sport weighs 277 pounds without fuel. The Husky comes in around the same weight as full-race motocross bikes, such as the Yamaha YZ450F, the Honda CRF450R and the Suzuki RM-Z450. We’re not quite sure where the weight was lost, but the fact that the Husky is light is obvious. It doesn’t feel like a dual-sport bike in the dirt. It floats on the sand instead of digging the signature dual-sport hole. Everything works better when the weight comes down; the bike stops faster, accelerates harder and gets better traction.

In the suspension department, Husky tried to walk a fine line between having a setup that’s plush and comfy and serving the needs of true dirt guys. In the end, the bike came out a little too soft for most riders. It’s good in first and second gear on rocks or semi-smooth trails. As soon as the speed increases or you get into real whoops, it’s too mushy. Even on the street, it dives under hard braking. You can get a lot done with clickers, but if you ride high-speed trails, you might want some suspension work.

Before spending a dime on suspension, though, you should budget in some more aggressive tires. We know, adventure bike riders consider Continental TKC80s to be great dirt rubber. But, when you put them on a bike as off-road-oriented as the Husky, they seem like street slicks. The rear is better than the front. We didn’t waste time replacing the tires with full knobbies and installing rim locks, but then we ran into an issue with the license-plate bracket. As soon as the higher-profile rear knobby caught the rear fender extension, the whole thing was torn off. We lost the license plate somewhere on the trail, and that’s not something anyone wants.

The rest of the dual-sport equipment holds up well. The blinkers are undamaged after a few weeks of riding, and even the mirrors are still intact. You can’t do much serious off-road riding with the mirrors mounted where they are supposed to be, of course. We always carry a wrench to spin them out of the way for mixed dirt/pavement rides.

THE BIG PICTURE
There’s no escaping the fact that a modern dual-sport bike has to have all the mandatory street equipment. In the case of the FE501S, all that stuff is as unobtrusive as possible. Frankly, we love the fact that it’s so quiet. We still get asked all the time about how to “unplug” the FE. We usually tell people to leave it alone and enjoy it, but it drives some riders crazy to know that there’s more power on the table. For those who are determined to modify the bike, we have a few cautionary words: first, it changes the bike into a closed-course vehicle. Second, there is no one modification that will be effective. If you change the pipe or vent the airbox, it will run worse. Those kinds of modifications require EFI remapping, which is tricky. If you go down that road, be prepared for a lot of testing or enlist the aid of someone who’s been there.

Or, you could just leave it alone and enjoy it.