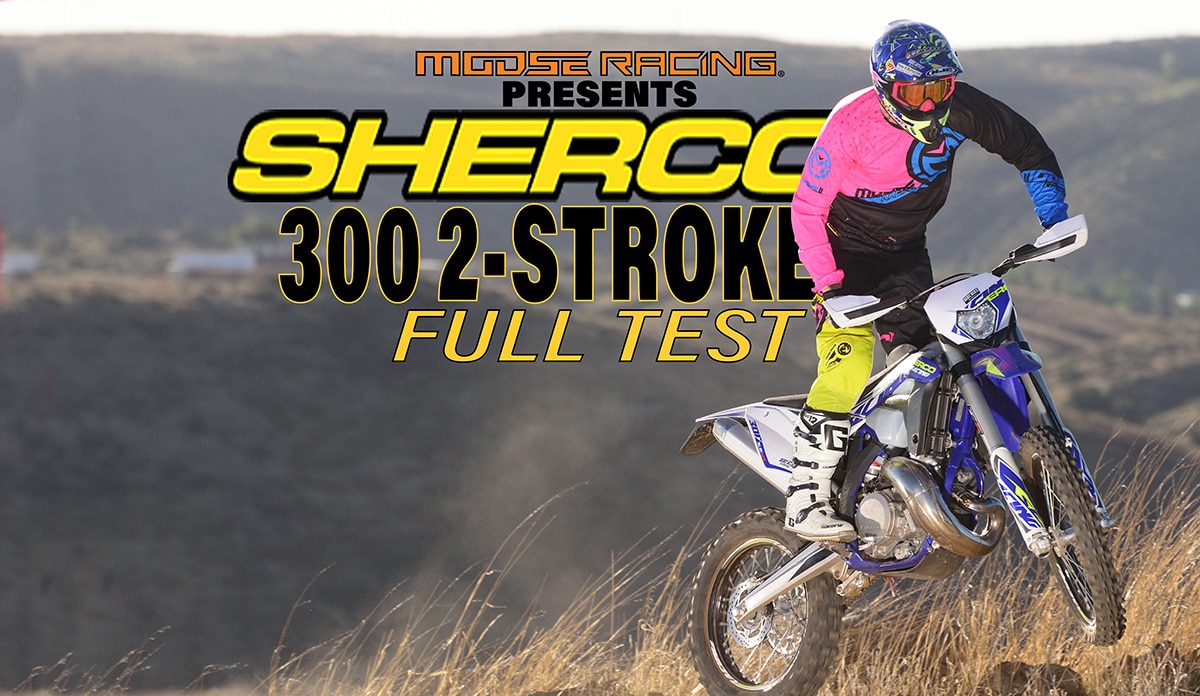 There’s no debate: A modern 300cc two-stroke with electric start is the most effective off-road race bike in the world. The Sherco 300SE-R extends the formula several steps further. It’s a very specialized European 300cc two-stroke that appeals to the true off-road purest.

Most Americans have heard of Sherco but think it’s a Spanish company that makes trials bikes. It is, but Sherco also makes off-road bikes in Nimes, France; it has for 15 years. In that period, the company has made a big impact in the world of hard enduro, with riders like Wade Young and Mario Roman, and earned several world enduro championships with Matty Phillips. Here in the U.S., the off-road arm of the company is just getting started with a nationwide importer based in Tennessee.

The 300SE-R is only the second Sherco we’ve tested, although it’s very similar to the 300SC we rode back in the February 2018 issue. The SE is the company’s bread and butter. It’s the bike of choice for eastern woods racing and extreme enduros. Wade Young used it to win Hell’s Gate, the Roof of Africa and the Extreme XL Lagares in the Red Bull Hard Enduro series. It has a six-speed, case-reed engine with an electronic power valve. The valve is operated by a remote electrical motor, similar to the design that Honda introduced before abandoning the two-stroke motor. The fundamentals are what you would expect in a European off-road two-stroke. The clutch is hydraulic. The brakes are Brembo, and the suspension is WP. Sherco has some interesting twists on the formula. The battery is located under the air filter for a lower center of gravity, and the fuel petcock isn’t built onto the tank; it’s located next to the 36mm Keihin PWK carburetor. The bike comes with parts that would be aftermarket items on other machines. The reed is a Moto Tassinari V-Force 4S, and the exhaust pipe is an FMF Gold Series. The silencer is made by Sherco and has no spark arrestor. We don’t really understand the reasoning, but it has something to do with U.S. customs and the fact that it’s imported as a closed-course competition model, as are all two-strokes.

There are two different ignition curves that you can select from a handlebar-mounted switch. There’s also an on/off switch for the bike’s entire electrical system up there. Don’t get the two mixed up or you might have a dead battery next week. The Sherco doesn’t have a kickstarter as a backup, but it will bump-start and self-charge very quickly. The battery is an old-school Yuasa lead-acid type, which has the advantage of producing excellent starting amperage even when cold, but it’s heavy compared to the latest-generation lithium batteries. Overall, the bike is on the heavy side, tipping the Dirt Bike analog super scale at 244 pounds without fuel but with all other fluids.

WHAT DO YOU DO WITH A SHERCO?

You find the toughest trails and the tightest conditions and you have a blast. Sherco was founded by a trials bike enthusiast named Marc Teissier, and even though the next generation of the family is running the show these days, that trails bike influence still permeates the product. The Sherco motor is super smooth, especially right off the bottom. There’s no jerkiness, and it never, ever hesitates when you open the throttle. As the revs increase, the power delivery is absolutely linear, and it eventually makes excellent power. The motor feels like it has a lot of flywheel effect, which adds to the smooth delivery and makes it very hard to stall. When you want power right now, though, you can’t be in a tall gear and expect to use the clutch to summon a big hit. You’re better off with a downshift. The very nature of that smooth power delivery means that it doesn’t hit hard like a motocross bike. We were pleased to find that the second map switch actually makes a difference. It seems to pick up a little low end at the price of a bit of peak power. All too often map switches are placebos without any real application.

If you’re riding on a tight trail with partial throttle settings, the jetting is perfect. It never loads up and usually runs perfectly clean. You can see the trials influence in these conditions. Even when there’s no air getting to the radiator, it doesn’t overheat. A Husky or KTM in the same conditions would boil over fairly quickly. If you do overheat the Sherco, the radiator has a catch tank so it keeps its coolant on board. Occasionally, you might find a big sandy hill that requires full throttle and puts the engine under a load. In those conditions, the Sherco can ping a little. We mixed in a small amount of race fuel to deal with this. If you want the exact ratio, it would be three glubs or a half-splash per tank—maybe 3.2 glubs; the motor isn’t that picky.

Sherco did a good job of matching the suspension to the motor. The spec panel says that the fork is a WP Xplor 48, the same as the one that comes on the KTM 300XC-W. It doesn’t feel the same, though. It’s still excellent on small rocks and roots, just like the KTM version of the fork, but the Sherco stays up in its stroke better and handles big hits well. In the rear, the Sherco performs well too. You have to keep in mind that the SE is made for tight trails. It would be too soft for high-speed whoops and western-style racing. That’s why the company makes the 300SC that we previously tested; it has stiffer suspension with a closed-cartridge fork. To be honest, we prefer the cushier setup of the SE version.

If you had to characterize the handling of the Sherco in a word, it would be unshakable. It’s a stable, predictable platform. The front end sticks well. It doesn’t wander, and you aren’t surprised by anything sudden. It isn’t a cut-and-thrust racer, and it isn’t especially quick-handling. The extra weight can be a factor if you get into places where you have to manhandle the bike or bulldog down a hill. Admittedly, if you do everything right, you will never find yourself in those situations, but this is the real world—and not everyone is Wade Young. It can also be a struggle to deal with the stock Michelin FIM enduro tires, which were not designed with the U.S. market in mind. The rear has the 13mm Euro knob pattern, which works for hard-packed soil but is weak in sand or mud. Consider it a break-in tire.

Almost all of the other components on the Sherco are the best stuff made, although not necessarily name brands that Americans would be familiar with. The gripper seat cover is a Selle Dalla Valle, and the bars are Neken. We don’t know who makes the electronic odometer, but it’s clearly a high-quality unit, and the readout is much bigger than what you’ll find on most other off-road bikes. The graphics are molded into the plastic, and quality is evident everywhere. 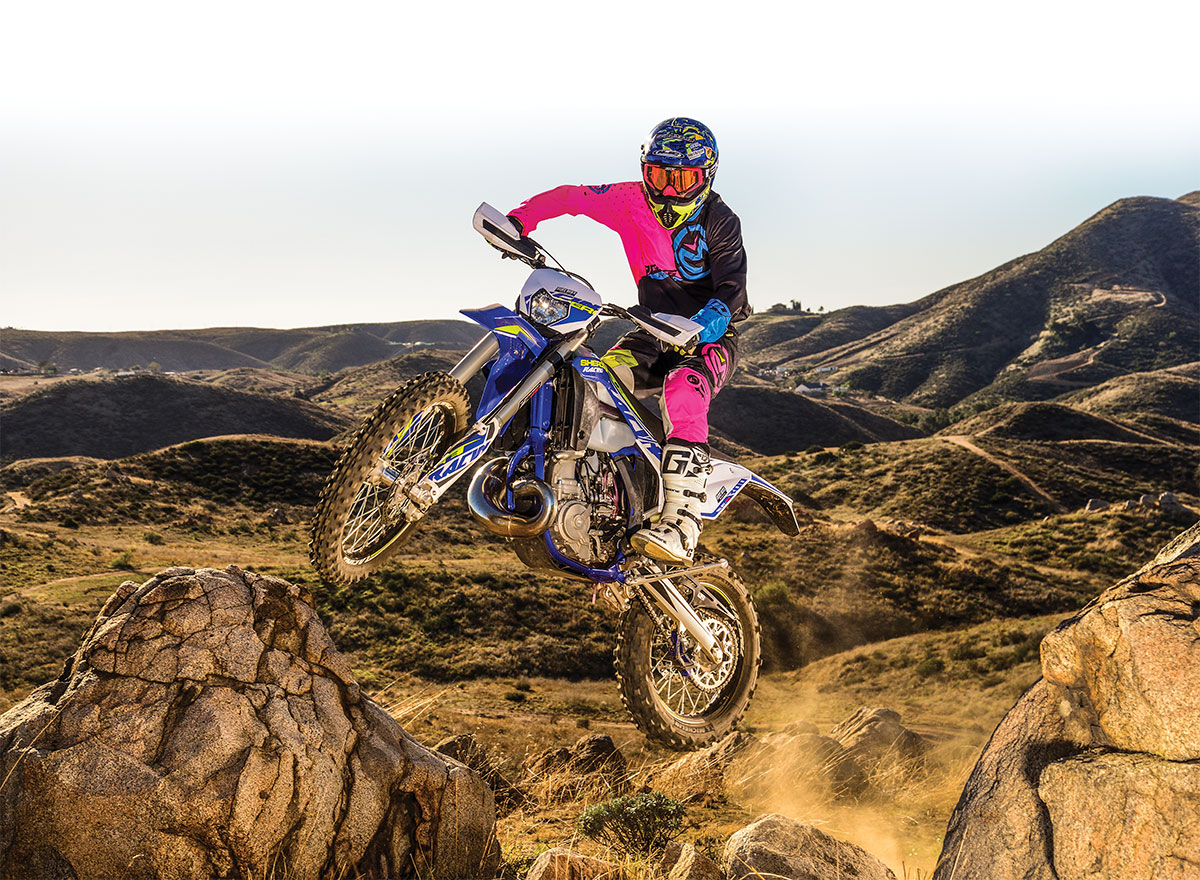 Overall, the Sherco is exactly what it should be. There are certain expectations that come with any 300cc two-stroke off-road bike these days, and the 300SE-R clears all the hurdles and fulfills all the requirements. At the same time, it isn’t a KTM clone. The bike has a very different personality with its trials bike heritage. It isn’t a bike for the masses, and it’s not even for guys who ride Hell’s Gate or the Romaniacs. It is, however, for guys who know what those races are and at least like thinking about riding them.