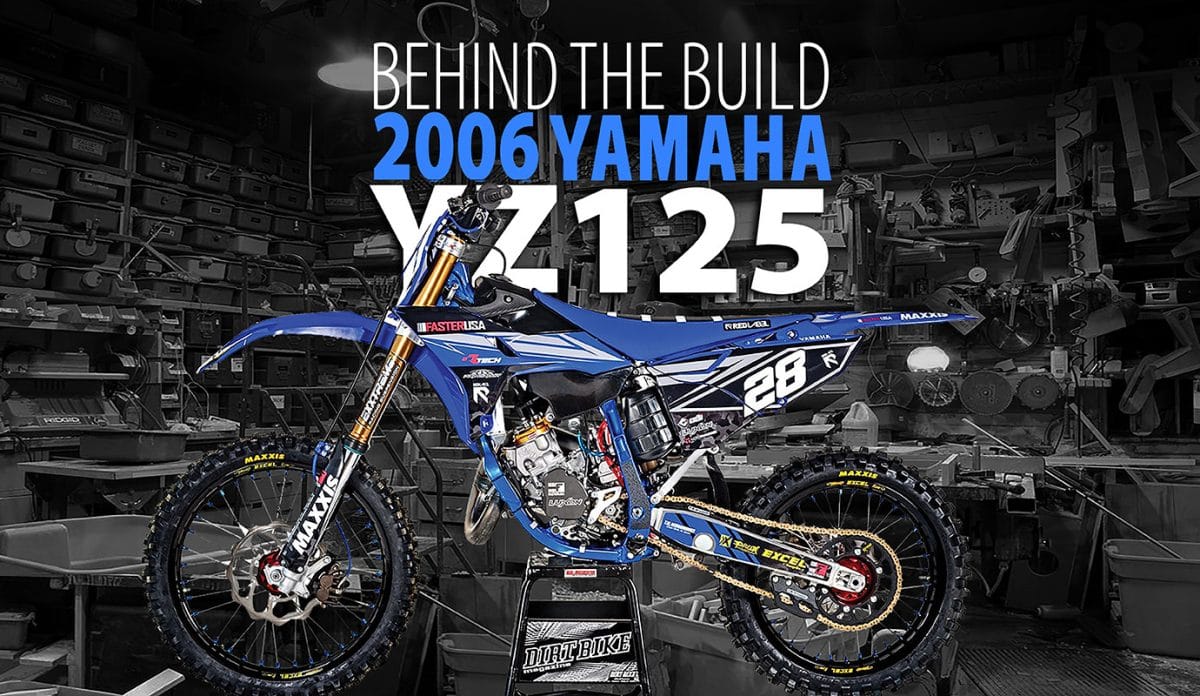 There’s no better project bike than a Yamaha YZ125. First, there are a million of them out there on Craigslist, eBay or any yardsale. Second, it’s been basically the same bike since 2005. You can find an 18-year-old bike and when it’s done, pass it off as a new one. In this case, we started out with a $1500 2006 model and handed it over to Colin and Vince at Faster USA.Their wheelsets have been featured on a wide variety of our project bikes in the magazine over the last several years, and on this bike, they got their hands really dirty building the entire bike.

When purchasing a used two-stroke, there are a few things you have to assume. First, the bike has more time on it than the owner says, so plan to replace or at least inspect the top-end. If the ad claims the bike has “never been raced,” turn around and run away, because what that really means is, “I did a horrible job taking care of this bike, but I don’t want to say it.” With that being said, Colin found a bike that looked rough but had good bones and tons of potential. 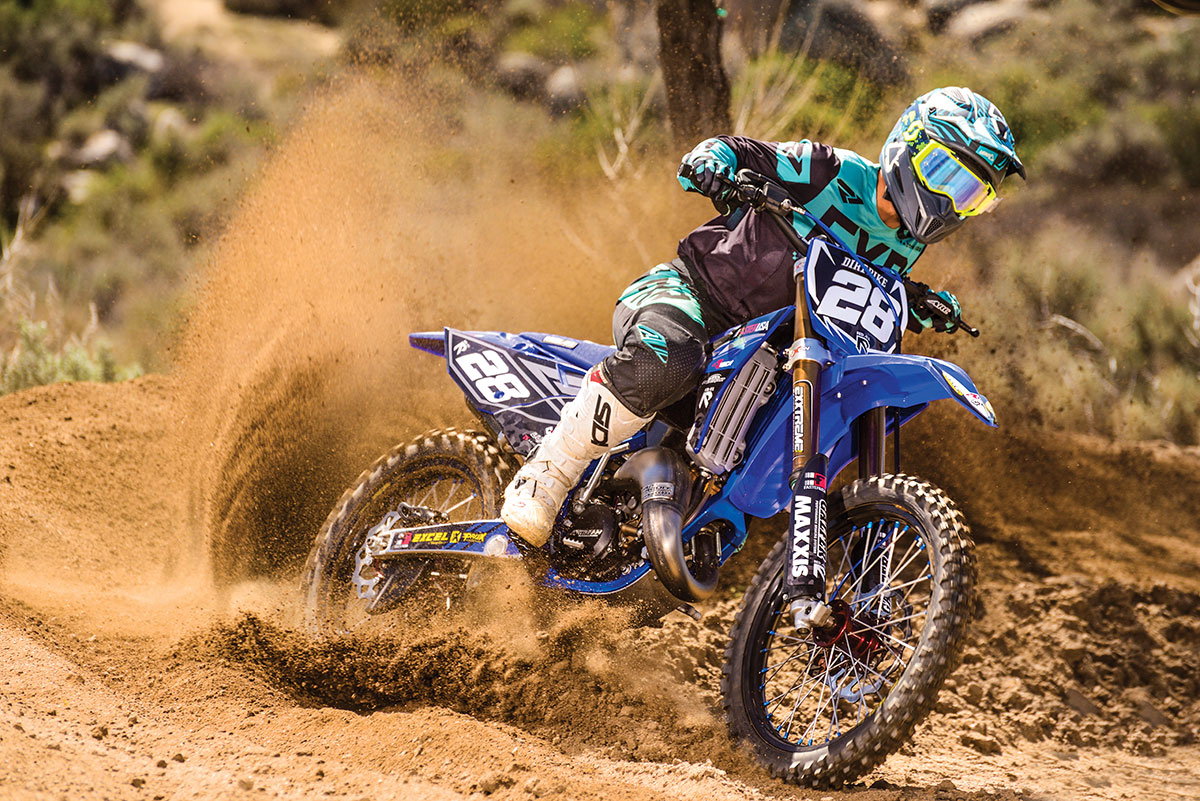 The nice thing about two-strokes is that, with a handful of tools, you can have the bike completely torn down to the frame in a couple of hours. Of course, it never goes back together quite as quickly. During tear-down, Colin and Vince noticed a few minor items that would definitely need to be fixed, but surprisingly, there was nothing major that could have stopped the build in its tracks. Now, when we say nothing “major” was wrong, that doesn’t mean there were no issues. It just means there was nothing that scared us.

We evaluated the condition of the chassis, and for a bike over 12 years old, it looked decent. Of course the bearings were all dry and some showed a little rust, but nothing serious. The frame and swingarm were both in great structural condition. Faster USA does tons of anodizing, as you can imagine with the wide variety of colored hubs they offer. Our first idea for the frame was to anodize it a bright blue to make it stand out. Well, that didn’t go as planned, but we learned a valuable lesson about how frames are made and how anodizing different types of aluminum affects the color. The bottom line is that the frame came out 50 shades of blue, so it was back to the drawing board.

Our next frame-color plan turned out way better. Chris Johnson and his crew at San Diego Powder Coating covered the frame with a blue metallic that sparkles like crazy under any type of light, and the swingarm received a clear anodized finish to spruce it up a little. While the peg mounts were off the frame during powdercoating, they were blasted and Cerakoted a gunmetal gray to match the brake calipers and master cylinders. The OEM pegs were powdercoated black. The suspension linkage was cleaned up with Scotch-Brite pads and good old elbow grease. All the bearings and seals were replaced with ProX kits. The fork and shock were sent off to Exxtreme for some major TLC and a high-dollar Kashima coating. At Exxtreme, both ends underwent a complete rebuild and re-valve service, in addition to the Kashima coating up front. New triple clamps from Luxon MX that are designed to be 3/4 of a pound lighter and stronger than the OEM units were installed.

When you get a used two-stroke, it’s almost cheaper and better for your sanity to disassemble the engine and rebuild it than to chance it and have the thing blow up. We installed a brand-new Wiseco crank kit and top-end piston kit that includes all the gaskets and seals needed. While the cylinder was off, we decided to do some grinding on the ports for some additional performance. A complete golden VHM head was also installed that allows you to change the combustion chamber compression ratio by simply changing an insert. The head also features specially designed water ducts to keep the engine cool, even under racing conditions.

Other performance items included Moto Tassinari V-Force reeds and a complete Pro Circuit exhaust featuring Pro Circuit’s Ti-2 Shorty constructed of carbon fiber and titanium. The OEM clutch was also replaced with a Wiseco Extreme clutch kit that includes the basket, inner hub, pressure plate, steel plates, fiber plates, springs and a machined billet-aluminum clutch cover. To time warp the 2006 YZ125 straight to 2018, we used an R-Tech Revolution plastics kit that changed the styling completely, giving it a more aggressive, updated look. The kit comes with a new all-black gas tank and requires some riveting of the airbox, but the stock seat can still be used. It does require a little more work the first time than just putting on new plastics, but with a cost of around $500, we think the styling update is well worth the money and additional time required for installation. We chose blue, but R-Tech also offers the kit in white and yellow. Eli at RedLabel topped off the new styling with a custom set of graphics and a gripper seat cover to match. Once the build was complete, Colin and Vince made the final decision on wheel color. They both agreed that red hubs, silver spokes, blue nipples and black Excel rims would really pop against all the blue on the bike.

Just about everything that can be done to a YZ125 was done to this machine. The engine mods make the bike great for someone who will hold it wide open and clutch it all the time. It’s a far cry from the mild-mannered, bottom-end to mid-range friendly power of the stock engine. The Exxtreme suspension upgrades work really well, and the rider cockpit is comfortable, because both Colin and Vince are about our size, and the bike is set up for them. We will be the first ones to admit that this build is a tad bit on the extreme side. But, if you really start crunching numbers, it’s not so bad. The YZ125 hasn’t changed drastically in over a decade, and the 2018 model retails for $6499. This bike was originally bought for $1500, and when the smoke cleared, we had spent an additional $4500. You might be thinking, “That’s almost a s much as a new bike!” We thought the same thing, but if you really look at it, the bike we ended up with has all the modifications that would be made to a new bike, so technically we saved all kinds of money and have a bike that turns heads no matter where it goes.