By 1996 the age of the big rig had officially begun in professional motocross. It was a dynamic move the changed the sport forever.  In September of that year, Roger DeCoster had been with Suzuki for about a year, and was still writing a monthly column for Dirt Bike Magazine, where he talked about the coming of the big rig and looked back on how it was in the old days. 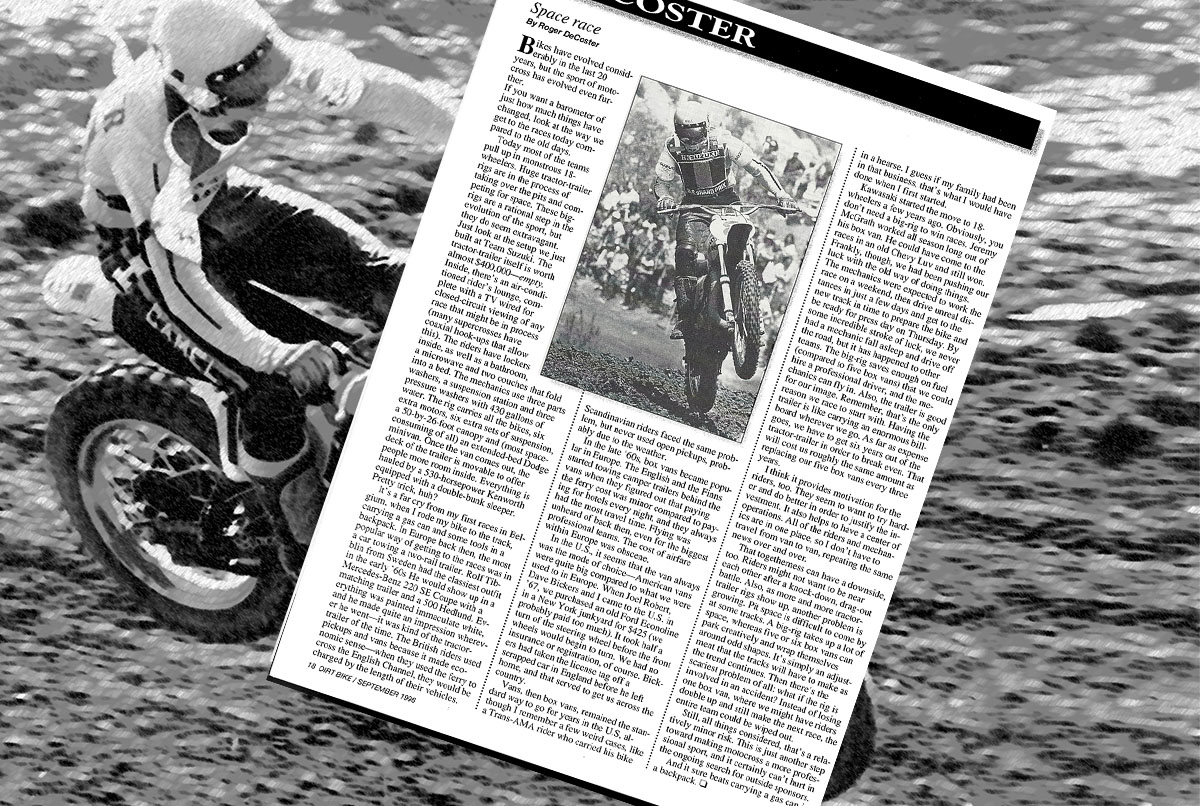 Bikes have evolved considerably in the last 20 years, but the sport of motocross has evolved even further. If you want a barometer of just how much things have changed, look at the way we get to the races today compared to the old days.

Today most of the teams pull up in monstrous 18-wheelers. Huge tractor-trailer rigs are in the process of taking over the pits and competing for space. These big rigs are a rational step in the evolution of the sport, but they do seem extravagant. Just look at the setup we just built at Team Suzuki in ‘96. The tractor-trailer itself is worth almost $400,000–empty. Inside, there’s an air-conditioned rider’s lounge, complete with a TV wired for closed-circuit viewing of any race that might be in process (many supercross venues have hook-ups that allow this). The riders have lockers inside, as well as a bathroom, a microwave and two couches that fold into a bed. The mechanics use three parts washers, a suspension station and three pressure washers with 430 gallons of water. The rig carries all the bikes, six extra motors, six extra sets of suspension, a 50-by-26-foot canopy and (most space- consuming of all) an extended-bed Dodge minivan. Once the van comes out, the deck of the trailer is movable to offer people more room inside. Everything is hauled by a 530-horsepower Kenworth equipped with a double-bunk sleeper. Pretty trick, huh?

It’s a far cry from my first races in Belgium, when I rode my bike to the track, carrying a gas can and some tools in a backpack. In Europe back then, the most popular way of getting to the races was in a car towing a two-rail trailer. Rolf Tibblin from Sweden had the classiest outfit in the early ‘60s He would show up in a Mercedes-Benz 220 SE Coupe with a matching trailer and a 500 Hedlund. Everything was painted immaculate white, and he made quite an impression wherever he went–it was kind of the tractor-trailer of the time. The British riders used pickups and vans because it made economic sense. When they used the ferry to cross the English Channel, they would be charged by the length of their vehicles. Scandinavian riders faced the same problem, but never used open pickups, probably due to the weather.

In the late ’60s, box vans became popular in Europe. The English and the Finns started towing camper trailers behind the vans when they figured out that paying the ferry cost was minor compared to pay- ing for hotels every night, and they always had the most travel time. Flying was unheard of back then, even for the biggest professional teams. The cost of airfare within Europe was obscene.

In the U.S., it seems that the van always was the mode of choice–American vans were quite big compared to what we were used to in Europe. When Joel Robert, Dave Bickers and I came to the U.S. in ‘67, we purchased an old Ford Econoline in a New York junkyard for $425 (we probably paid too much). It took half a turn of the steering wheel before the front wheels would begin to turn. We had no insurance or registration, of course. Bickers had taken the license tag off a scrapped car in England before he left home, and that served to get us across the country.

Vans, then box vans, remained the standard way to go for years in the U.S, although I remember a few weird cases, like a Trans-AMA rider who carried his bike in a hearse. I guess if my family had been in that business, that’s what I would have done when I first started.

Kawasaki started the move to 18- wheelers a few years ago. Obviously, you don’t need a big-rig to win races. Jeremy McGrath worked all season long out of his box van. He could have come to the races in an old Chevy Luv and still won. Frankly, though, we had been pushing our luck with the old way of doing things. The mechanics were expected to work the race on a weekend, then drive unreal distances in just a few days and get to the new track in time to prepare the bike and be ready for press day on Thursday. By some incredible stroke of luck, we never had a mechanic fall asleep and drive off the road, but it has happened to other teams. The big-rig saves enough on fuel (compared to five box vans) that we could hire a professional driver, and the mechanics can fly in. Also, the trailer is good for our image. Remember, that’s the only reason we race to start with. Having the trailer is like carrying an enormous bill-board wherever we go. As far as expense goes, we have to get six years out of the tractor-trailer in order to break even. That will cost us roughly the same amount as replacing our five box vans every three years.

I think it provides motivation for the riders, too. They seem to want to try harder and do better in order to justify the investment. It also helps to have a center of operations. All of the riders and mechanics are in one place, so I don’t have to travel from van to van, repeating the same news over and over.

That togetherness can have a downside, too. Riders might not want to be near each other after a knock-down, drag-out battle. Also, as more and more tractor-trailer rigs show up, another problem is growing. Pit space is difficult to come by at some tracks. A big-rig takes up a lot of space, whereas five or six box vans can park creatively and wrap themselves around odd shapes. It’s simply an adjustment that the tracks will have to make as the trend continues. Then there’s the scariest problem of all: what if the rig is involved in an accident? Instead of losing one box van, where we might have riders double up and still make the next race, the entire team could be wiped out.

Still, all things considered, that’s a relatively minor risk. This is just another step toward making motocross a more professional sport, and it certainly can’t hurt in the ongoing search for outside sponsors. And it sure beats carrying a gas can in a backpack.