2004 KAWASAKI KX65 PROJECT: BEHIND THE BUILD 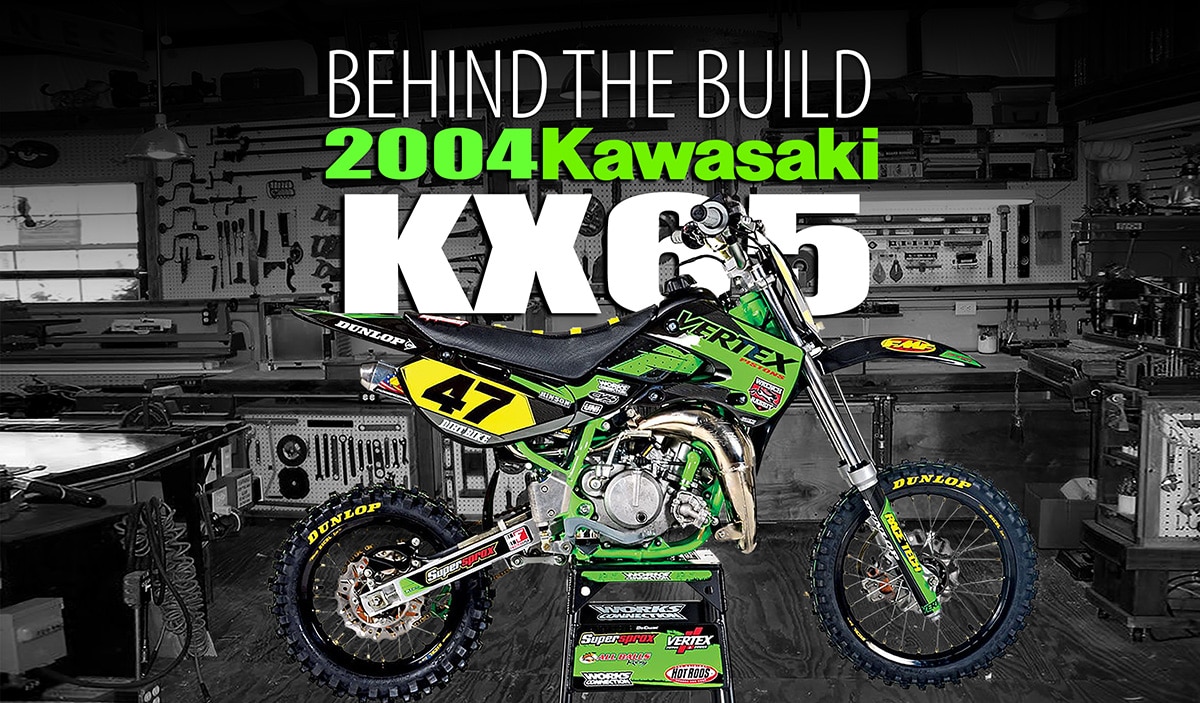 The mini racing scene can be very expensive, but we have a solution! The Kawasaki KX65 has been the same since its introduction almost two decades ago, and they are readily available for dirt cheap on the used market.

Okay, so we know that a machine built with technology from the turn of the century will not set the world on fire, but there are a ton of aftermarket products available for the KX65 that can help. We bought our 2004 Kawasaki KX65 project for $500. It had been sitting for about six years, which is very common because kids get too big for the bike, and was shoved into a corner of the garage collecting dust. Although a bit rough in appearance, our KX65 was in one piece and just needed some TLC. Just like with our full-size, older project bikes, we tore this one down to the frame, paying close attention to bearing conditions, frame joints for cracking and, of course, the engine health.

Our KX65 engine was in running condition when we acquired it but had some signs of excessive use. In these situations we have learned it’s better to be safe than sorry. The engine was torn down and inspected, and it’s a very good thing the time was taken to do so. We had a cracked piston skirt and some metal debris in the bottom end that we couldn’t figure out where it came from. The cylinder looked great, so we just cleaned it up, making sure all the hardware and gaskets were in good condition. A Wrench Rabbit complete engine rebuild kit was used and comes with a crank, top-end piston kit, main bearings and complete gasket kit. We added a Moto Tassinari V-Force intake and FMF exhaust to increase some performance, but other than that, our KX65 engine was rebuilt to stock specs. Because we didn’t have to wait for the cylinder to be repaired, the engine was rebuilt pretty fast while waiting on the rest of the bike to be finished.

We wanted to give our KX65 a very unique look, so when the engine and suspension were being worked on, we sent the main frame to Chris Johnson and the crew at San Diego Powder Coating. Chris always comes up with something new that blows our minds, and this time was no exception. A couple of years back we did a KX250 we called the “Green Goblin,” and that bike had a custom color called Monster Energy Green. The green used on our KX65 is a neon version of that, paying homage to factory Kawasaki race machines from the late ’90s. With the frame being so bright, we decided to use an all-black set of Acerbis plastics to tone it down a little. Nic at Decal Works came up with a custom graphics kit using neon green, black and yellow to give us that factory look. We teamed that with an all-black gripper seat with yellow ribs from Motoseat.

Wheels and suspension take a beating on mini bikes, mostly due to neglect and people riding the bike who are way too big for it. We sent the fork and shock to Race Tech for some much-needed TLC. Surprisingly, there were no major issues. All the internal wear items were used up, but we expected that, so with new seals, bushings, oil and slightly stiffer springs all around to match the new valving, we were back in business.
Faster USA performed some magic on the wheels. The stock hubs were Cerakoted a dark grey, new bearings were installed and new stainless steel spokes were laced up to black Excel Takasago rims wrapped in Dunlop 3S tires.

RACE-READY
Sometimes we have a tendency to go slightly overboard and completely blow our budget when building project bikes. Our KX65 build, however, falls in the category of getting a lot of mileage out of every penny. We now have a very competitive mini for 75 percent of the class’ skill level at about half the cost of a new stock machine, plus ours is completely personalized to its rider. Are the new bikes offered in the 65cc class better than our rebuilt 2004 KX65? Yes, but only a small percentage of the kids racing or riding in that class would be able to tell the difference.