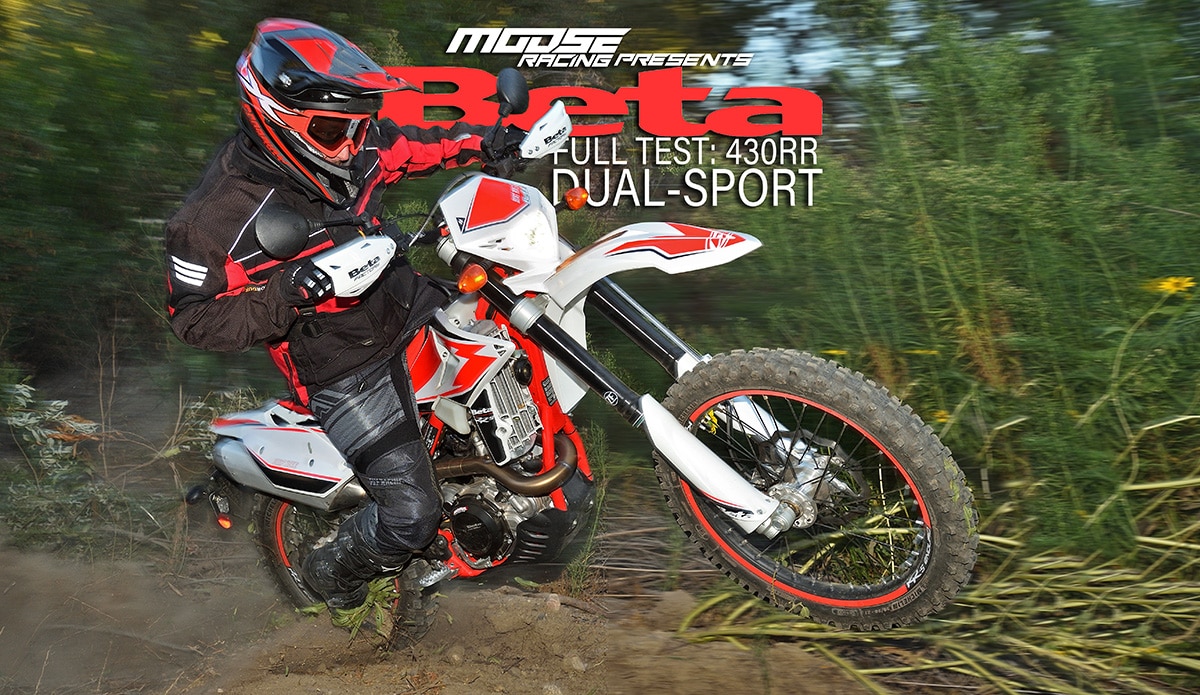 Simple fact: Beta has the biggest and the best full line of serious dual-sport bikes in America right now.
That’s it. No asterisks, no subtext and no double-talk. Beta is doing what Honda, Yamaha, Kawasaki, Suzuki, Husqvarna and even KTM can’t do. The 2019 Beta 430RR-S is a true dirt bike that needs no modification in order to be used off-road, yet it’s 100-percent legal for the street in all 50 states. Pop the champagne.
There’s no shame in not being familiar with Beta motorcycles. This is a small Italian manufacturer that has been very aggressive in the dirt bike world. Its main emphasis is two-strokes, dual-sport bikes and trials bikes. At one time Betas were expensive and hard to find, but things are changing. The number of these bikes coming to the U.S. has increased dramatically, and even though they’re still pricey, so is everything else.

Beta makes four different dual-sport bikes from the same basic platform. The 350, 390, 430 and 500 are almost indistinguishable from each other, differing only in bore and stroke. They all have different personalities, though, and that allows them to coexist. The equipment is the same. They all have Sachs suspension, Synerject EFI systems, six-speed gearboxes, Nissin brakes and come standard with a Trail Tech GPS. This is the first time we’ve ridden the 430. The bikes that it competes with are the Husqvarna FE450, the Honda CRF450L and the KTM 450EXC ISDE Edition. The reason so few companies offer dual-sport bikes, to state the obvious, is because it’s a tough gig. Street-legal bikes have to be very clean and quiet. The Environmental Protection Agency and the California Air Resources Board have the power to rain down all kinds of fire and brimstone on any company that they think is cheating the system. Ask Volkswagen. The bigger the company, the tougher the standard and the more closely it’s scrutinized. Beta, apparently, is so small that it has a more relaxed set of standards to meet. The 430 is quiet, but not as quiet as a Honda, Husqvarna or KTM. It meets all the emission rules in all 50 states, but there’s no air pump hanging off the side like on the Hondas and no catalytic converter in the comparatively small muffler.

The bottom line is that the Beta feels like a dirt bike. It’s 25 pounds lighter than the Honda on our scale (252 pounds without fuel compared to 277). A Husqvarna is still a little lighter. We haven’t weighed the FE450, but the nearly identical FE501 is 248 pounds. For 2019, Beta made very few changes to the motor. The EFI system was remapped, the throttle twist grip is new and the actuation mechanism for the hydraulic clutch is different. The suspension has the most changes. Up front, the Sachs fork is completely new. It’s called the 48mm ZF. The compression, rebound and spring preload adjusters are on the upper fork cap and do not require tools. The fork also has a new bushing system and special anodizing that is said to reduce friction. In the rear, the Sachs ZF shock has a more compact 46mm piston and is 300 grams lighter. The spring is also lighter, accounting for most of the modest weight loss between 2018 and 2019.

THIS IS A DUAL-SPORT?

The only giveaways that you’re riding a dual-sport bike are the tires and mirrors. Otherwise, the Beta is a smooth, light-feeling dirt bike. The power is a little soft off the very bottom, but then it has a fun little hit. It easily outperforms the Honda in peak power, although the CRF450L has more low-end and is geared lower in first. Is the Beta as fast as a 450 motocross bike? No, not by a long shot. We don’t want that. On the trail, the 430RR-S is way more fun, doesn’t overheat and rarely stalls the way a full-competition MX bike does. It also seems that the occasional mapping glitches that we experienced when we tested the 500RR-S last year have been cleared up. There is no tendency to cough and die. The bike doesn’t pop on decel and very rarely stalls. If that happens, it’s because you weren’t trying very hard.
Clearly, the bike’s big trump card is the fact that it’s barely legal. We have no way of knowing how clean or dirty the bike’s emissions are, but this generates no apparent handicap. This is the only current dual-sport bike that probably wouldn’t benefit from a remap with richer fuel delivery. It might gain some power from a competition muffler, but frankly, we like the quiet exhaust note. It’s not so plugged up that it makes the motor overheat, and the muffler isn’t oversized or heavy.

In the weight department, the Beta might not be as light as the KTM or Husky, but it’s still amazing. It’s only 12 pounds heavier than Honda’s CRF450R motocrosser and far lighter than Suzuki’s all-dirt RMX450Z. The Beta is so good as a real dirt bike that it begs to be judged by a higher standard. The trouble is that there are very few four-stroke bikes made specifically for the trail. Competition-oriented off-road bikes like the Honda CRF450RX and the KTM 450XC-W are far too unruly in a true off-road setting. They’re stiff, hard-hitting and improperly geared. The Beta has a truly sweet power delivery and six-speed gearbox that allows it to work as well on the trail as for brief stints on the road. There are two all-new off-road 450s that will be available for 2019—the Yamaha WR450F and the Honda CRF450X. Those bikes should be more comparable to the Beta, but, as of now, are still unreleased.

Not everything about the bike is perfect. We still haven’t come to terms with the new Sachs fork. It feels firm and doesn’t dive excessively, but it lacks the plush feel that we liked in the older Sachs fork. So far, we’ve found that increased rebound damping makes it work well on slow-speed trails. The new fork clickers are very easy to adjust on the fly.
We will also give you fair warning that the blinkers, license plate bracket and mirrors will part company with the rest of the bike sooner or later. If you forget everything else, remember this: don’t leave the key turned on when you stop. The battery needs to be at full strength to start the bike, and even a five-minute pause with the engine on can drain its life force. Remember, there’s no kickstarter. It still bump-starts easily.
The list of jobs well done is much longer. We love the Trail Tech GPS, which is standard equipment. It also comes with handguards and a plastic skid plate. The hydraulic clutch has excellent feel and a very light pull. The brakes are excellent, and if you need to access the battery or fuses, the seat pops off with the push of a button. It’s clear that the Beta was built by riders who just happened to be engineers, not the other way around.
The best thing about the Beta is that it will inspire others to try harder. Right now, the dual-sport ranks are thin, but there are more than there were two years ago. Next year there will be even more. With bikes like the Beta 430RR-S setting the standard, they will have to be the real thing.

2004 KAWASAKI KX65 PROJECT: BEHIND THE BUILD