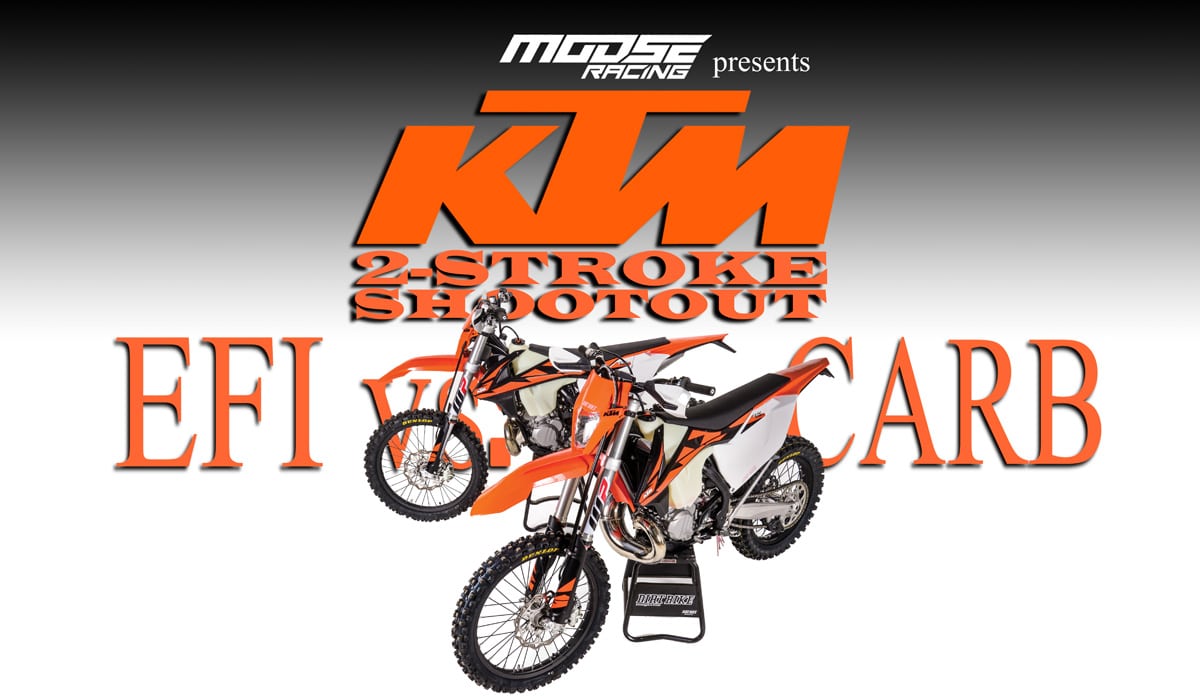 At the end of 2017, KTM announced the arrival of fuel injection for two-strokes. That prompted many questions. Will carburetors soon be a thing of the past? Will two-strokes soon be legal for road use in the U.S.? Does this change everything?
One question at a time. For now, we just want to know how the new injected two-strokes compare to conventional bikes with carbs. Luckily, KTM still has both. For 2018, KTM offers the 250XC-W in two different configurations. One has the TPI system, the other has a 36mm Mikuni. Otherwise, the two machines are identical. It’s the perfect situation for a one-on-one shootout.

WHY INJECTION?
First of all, you need to understand that the TPI system has not earned any kind of approval in the U.S. It is still imported as a closed-course vehicle, just like a full-tilt motocross bike. Right now, America isn’t the focus of the new technology; it was developed for the Euro 4 standard on the other side of the Atlantic. Over there, you can get a street-legal version of the XC-W, but it comes with drastic measures to make the cut, stuff like a very restrictive exhaust system and a throttle stop. A limited number of TPI two-strokes were sent to America, minus the restrictors, just so we wouldn’t feel left out.
The fuel injection system is remarkably compact. The key components are the injectors that spray fuel directly into the ports as air moves from the crankcase to the combustion chamber. Prior to that, clean air is drawn in through a Delorto throttle body. That creates the obvious problem of crankcase lubrication. Normally, the rod and main bearings of a two-stroke are lubricated by the oil you mix with the fuel. With this design, no fuel ever gets to the lower end, mixed or unmixed, so oil injection is necessary. There’s a separate oil tank with a filler right behind the steering head and an oil sprayer in the intake, between the throttle butterfly and the reed.
Everything else on the KTM 250XC-W TPI is identical to the standard KTM 250XC-W. In case you don’t know, it’s one of the greatest off-road bikes ever made. It has electric start and still has a kickstarter for back up. The gearbox is a six-speed, the clutch has a diaphragm spring and is actuated by a Brembo hydraulic system. The brakes are Brembo, too. The rear suspension has no linkage; it’s the latest generation of the PDS system which debuted in 1997. One of the reasons Cody Webb and his extreme riding cohorts love this chassis so much is that there’s no linkage hanging down to limit ground clearance. In front, the bike has the WP Xplor 48 fork, which uses an open-bath system with coil springs.

WHAT YOU ALREADY KNOW
Just so you know, we’re predisposed to love the standard version of the 250XC-W. Check your back issues of Dirt Bike. Back in the days when there were so many off-road 250 two-strokes that we did a shootout every year, the KTM was always the winner. It’s still an incredible bike because it’s all but unstoppable. You might stall it on purpose, but that takes a hard jab on the rear brake in a tall gear. For normal riding, the motor continues to run no matter how slow you go, then it climbs back into the meat of it power without hiccups or glitches. On top, the bike is faster than any other 250 two-stroke aside from the motocross version of the same bike. In other words, the bar for the TPI bike is pretty high, and people are understandably skeptical.
First things first, there’s a weight difference. The standard 250XC-W weighs in at 224 pounds without fuel. The TPI version is 231 pounds without fuel in the tank, but with a full tank of oil. If you want to be accurate, you can subtract 1.3 pounds to compensate for the 700cc of oil in the tank, but it becomes silly at some point because the two bikes have different appetite for gas and oil. You would have to have a larger tank on the standard bike to have the same range as the TPI bike, which gets better gas mileage. What it all boils down to is the fact that the difference in weight is virtually unnoticeable.
The difference in fuel consumption is for real, too but probably not as great as you  might think. We’ve always felt that the KTM two-stroke XC-W tank was a little too small. It holds 2.6 gallons which usually gets you around 45 miles. That, of course, is different for everyone. Two-strokes gas mileage varies wildly according to the terrain, speed and riding style. When we took the two bikes on the same 30-mile loop, with the same riders switching back and forth, the standard bike used 1.7 gallons while the TPI one burned 1.58 gallons. As for injector oil, there was barely a perceptible drop in the oil tank level. KTM engineers say that one oil tank should last seven fuel tanks. There’s a warning light that comes on when you have enough oil for one more gas tank of riding. This was all done at altitudes below 2000 feet, so under normal conditions, you can count on about 50 miles from the injected bike.

MOUNTAIN HIGH
On another ride, we rode the two bikes from the high desert into the mountains. The ride started at 3000 feet and gradually climbed to 6000 feet. Throughout most of the ride, the carbureted bike ran fine. Only when we reached the highest elevation did it start running rich. The motor could be cleaned out if you had room to rev it out, but there wasn’t always enough space. Mountain trails are generally tight and twisty, and the carbureted bike usually had a mild miss at low rpm. The injected bike didn’t. Part of the rationalization of fuel injection is that it compensates for altitude. There are several sensors gathering information about air density and engine temperature, so the motor can adjust accordingly.
On our mountain test loop, we also found that fuel mileage increased dramatically for the injected bike, but was about the same for the carbureted XC-W. In fact, the difference between the two was a good 20 percent. Most of these trails were tighter and twister than our low-altitude testing grounds, so we would expect both bike to have greater range. The TPI brain restricted fuel proportionally with the decrease in air density, as reported by the system sensors.
On the other hand, there are no sensors that can tell the bike what kind of exhaust you’re running or if you have race gas. That could present a problem in theory, but in our test, it didn’t make any difference. We installed an FMF Turbine Core 2 silencer/spark arrestor on both bikes. It altered the power delivery of both bikes equally to a very small degree. We also ran non-oxygenated race fuel in both without noticing any change. If you made more drastic changes in fuel or engine modification, you could compensate with jetting on the standard bike.  That’s not yet possible with the injected bike.

BUT HOW DO THEY RUN?
They’re different. The bike with the Mikuni carb has a harder hit and just a little more power in the mid-range. The TPI bike is smoother down low and runs even better at super low rpm. In roll-on drag races, the two bikes accelerate almost dead even. The standard bike’s feeling of a harder hit mostly comes from from free-rev when the clutch is in. It gains rpm a little faster, as if it has more flywheel. It does, in fact, have a different generator, but it’s unclear if the flywheel mass is different or not. It just “feels” heavier.
Another difference between the two is a certain glitch that occasionally arises on the injected bike. It sometimes will hesitate if you rev the motor and drop the clutch. The sudden load on the motor might confuse the bike’s central processor. If you hit a deep, powdery berm hard and double clutch the motor, it can feel like you jabbed at the kill button. We struggled with repeatability on this issue. Some riders could summon the glitch, others couldn’t.
It’s worth noting that the carbureted bike has glitches of its own, it’s just that we’re so familiar with them that they’re almost invisible. If you run the bike at low rpm for an extended period, it has to clear its throat when you first get on the gas again. Any two-stroke guy is used to this. Also, you don’t just leave the bike idling on the side stand and walk away. It will load up. And when you first start it on a cold morning, it takes a while to run right. All of these are normal two-stroke traits that don’t occur with the injected bike.

BUT IS IT BETTER?
Right now, TPI technology is just getting off the ground. The carbureted two-stroke has decades of development, yet the two are very close in performance. In America right now, there are only a few circumstances where a fuel injected two-stroke is really an advantage. One of those, of course, is if you ride in the mountains. Another is if you want to squeeze every last mile out of your fuel tank. In the future all that will change. Expect developments to come rapidly, just as they did in the four-stroke world. Will the street-legal two-stroke be one of those? It seems far fetched based on what we’ve seen so far, but we’re just starting down this road. Who knows where it will go?

THE WEEKLY FEED: HANNAH UNPLUGGED AND A LOOK BACK AT THE FIRST HONDA XR600R