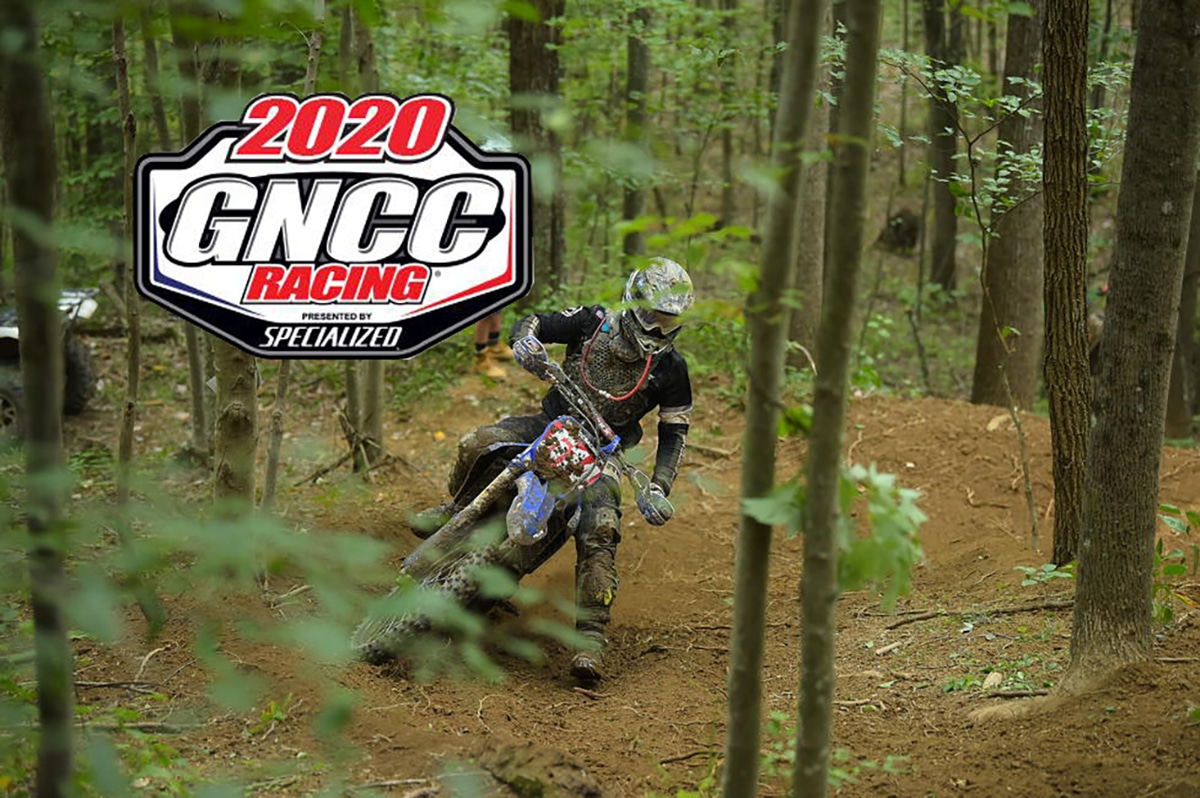 The Yamaha Burr Oak continued on Sunday, September 27, with the world’s fastest off-road motorcycle racers taking to the woods of Ohio. The tenth round of the 2020 Grand National Cross Country (GNCC) Series presented by Specialized, an AMA National Championship, took place in Millfield, Ohio at Sunday Creek Raceway, also home to The John Penton GNCC.

Getting the jump off the line first to earn the $250 All Balls Racing XC1 Holeshot award was FMF/KTM Factory Racing’s Ben Kelley. However, after overshooting the first turn Kelley would lose a couple of positions. AmPro Yamaha’s Steward Baylor Jr. would capitalize, moving into the early lead as the group of XC1 Open Pro riders made their way into the woods.

As the leaders made their way through the finish line on the opening lap it was Baylor Jr. holding a 7 second lead over FMF/KTM Factory Racing’s Kailub Russell, with Kelley running third just 8 seconds behind him. Russell looked like he was making a charge for the lead, but on the second lap he would find himself on the ground after a mistake in the John Penton section of the track. Russell was able to ride his machine back to his pit area but was unable to return to racing due to a knee injury. Russell will have his knee evaluated this week.

FactoryONE Sherco’s Grant Baylor got off to a great start coming through timing and scoring in fourth overall on lap one. Baylor would continue to push and would find himself third overall after the second lap. Baylor would try to close the gap between himself and the leaders, but he would be unable to make any passes on the lead duo before the checkered flag came out. Baylor expressed what a great feeling it was to be on the podium, and that it was cool to share the overall podium with his older brother.

Getting off to a top five start was Babbitt’s Online/Monster Energy/Kawasaki’s Jordan Ashburn. Ashburn would then make the move up to fourth on lap two, as he tried to gain momentum to challenge for a three position. Ashburn would continue to ride a consistent race, but he would be unable to challenge the top three riders. Ashburn would finish out the day fourth in XC1 and fifth overall.

Phoenix Honda Racing’s Andrew Delong had his second best race of the season on Sunday afternoon. Delong came through running sixth in the XC1 class for the first two laps of racing, and as the race wore on, he then found himself making the move up to fifth in his class. Delong finished out the three-hour race with a fifth place finish in class, and eighth overall.

Returning after a small injury sidelined him for the previous round of racing was Babbitt’s Online/Monster Energy/Kawasaki’s Josh Strang. As the pack of racers came through on the opening lap Strang made his way around in the eighth place position. Strang would then stop to help his fellow competitor, Russell, out of the track and back to his motorcycle. Even after stopping to help, Strang would make the move up to seventh in the XC1 class. On the last lap of racing Strang would make a late charge and take over sixth in the class, with a 13th overall finishing position on the day.

AmPro Yamaha’s Layne Michael found himself in a continuous battle throughout the day in Ohio. Michael would swap back-and-forth from sixth to seventh place multiple times throughout the race. As Michael was running in sixth on the final lap of racing, he would be unable to hold off a charging Strang. Michael would check in seventh in class, 18th overall at round 10. Rockhill Powersports/Ti Dezigns/UFO Plast’s Evan Earl would come through to earn eighth in the XC1 Open Pro class after missing round nine of racing.

In the XC2 class it was Trail Jesters KTM’s Jonathan Girroir making his way to the lead on the opening lap. Girroir would maintain his lead for the duration of the race, placing a 22 second gap between himself and second place by the time the checkered flag flew. Girroir earned his fifth win of the season, and now takes over the points lead in the XC2 class by nine.

AmPro Yamaha/St. Lawrence Radiology’s Mike Witkowski had a consistent race as he made his way into second and never looked back. Witkowski was looking to make a charge for the lead, but he would be unable to close the gap between them. Witkowski remains third in the points standings, 20 points behind the leader.

Rockstar Energy Husqvarna Factory Racing’s Craig Delong had some work cut out for him as he came through timing and scoring sixth on lap one. Delong would steadily work his way through the pack, making his way into fourth by the second lap and then third by the next. Delong would finish out the day third in his class, and seventh overall.

As the FMF XC3 125 Pro-Am competitors came through it was Moose Racing/Carolina KTM/XC Gear’s Zack Hayes taking the class win and extending his points lead by 35.

FXR/KTM’s Jason Lipscomb would battle from third to second in the class, making his way to the podium for the second time. Canyon Motorsports/FXR/JDP Suspension’s Michael Delosa rounded out the top three in the FMF XC3 class.

As the 10 a.m. race got underway it was Factory Beta USA’s Rachel Gutish grabbing the $100 Trail Jesters WXC Holeshot award. However, AmPro Yamaha’s Rachael Archer would make her way to the lead early on in the race. Archer would check in 18 seconds ahead of Gutish on the opening lap with current points lead BABS Racing Yamaha/Maxxis’ Becca Sheets right behind her.

Archer would continue to hold her lead position throughout the two-hour race, crossing the finish line with over a minute gap back to second. Sheets would make the pass on Gutish for the second, but she was ultimately unable to catch Archer to battle for the lead. Sheets would earn second in the WXC class and remains in control of the points standings. Gutish held onto third in the class, and she currently sits fourth in the WXC class points standings with three more rounds of racing to go.

Racing would get underway at 8 a.m. Sunday morning with the youth motorcycle racers taking to the woods first. It would be a three-way battle between the Team Green Kawasaki due of Jack Joy and Grant Davis, and Coastal Racing Husqvarna’s Lane Whitmer. Davis jumped out to the early lead with Whitmer and Joy just seconds behind him. Joy would make the pass on Whitmer for second and set his sights on Davis as the race worse on. As the trio came through after four laps of racing it was Joy out front with Whitmer and Davis running second and third. Joy would hold on and take the youth overall win as well as the YXC1 Super Mini Sr. class win. Davis would make the pass on Whitmer stick as they would round out the top three youth overall finishers and top three in the YXC1 class.

In the YXC2 Super Mini Jr. class it was Nicholas Defeo taking the class win, with Andrew Segars and Chase Landers rounding out the top three. Colton Shields would earn the 85cc (12-13) class win, and seventh overall. Ryan Amancio came through to take another 85cc (7-11) class win.

The Yamaha Burr Oak AMSOIL Moto Hero was awarded to Masters A (50+) competitor, Troy Stanley. Troy is from Proctorville, Ohio and enlisted into the Army right after he graduated from High School. Troy served in Germany and was active duty until 1990. Troy left the army as an E4 Specialist. Troy has been a longtime GNCC Racer, starting back in 1993. He is also a cancer survivor with a heart of gold. Troy was nominated by his wife Stacee and his fellow competitors to be awarded the Moto Hero as he has the biggest giving heart and never complains. Troy is awarded a free set of Kanati Lite truck tires from GBC Tires, a $250 AMSOIL shopping spree and a commemorative American Flag courtesy of Columbia Flag and Sign company and a $200 Gift Certificate for their store.