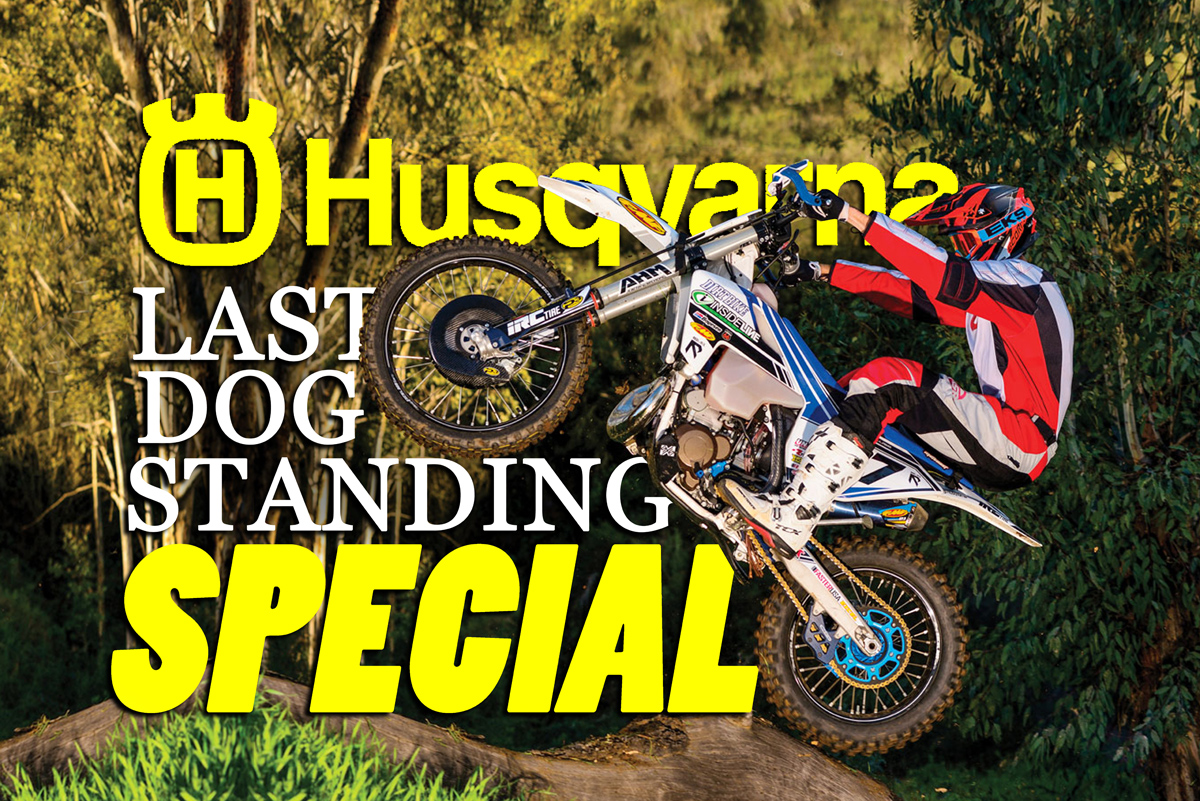 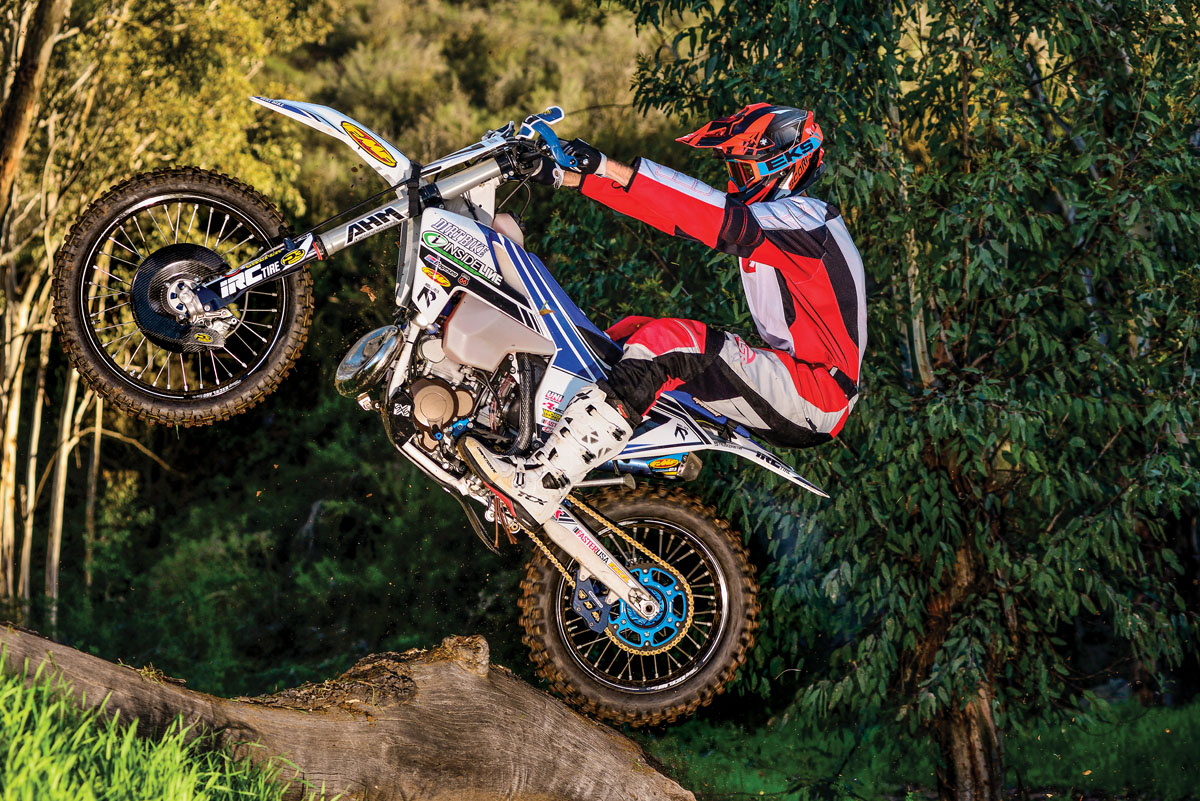 Our buddy, Jason “Hapa” McCune from Inside Line Connect (ILC), purchased and assembled this bike with one purpose and one race in mind—it’s designed for this week’s Last Dog Standing (LDS) extreme enduro, and we’ve encouraged the project enthusiastically from the start. In fact, we’ve never been so excited about a project bike’s very existence.
Three years ago we were naive enough to loan Jason a KTM 300 test bike for that same race. When the bike returned, it looked like it had been dropped from a low-orbit satellite. Every inch was scratched, dented or broken. Jason sheepishly offered to repair it as best he could. Still, when the bike was returned to KTM, we had violated every condition listed on the loan agreement.
Since then, Jason has planned for his epic return to LDS. Now, he’s ready. The best part is, he won’t be riding one of our bikes. 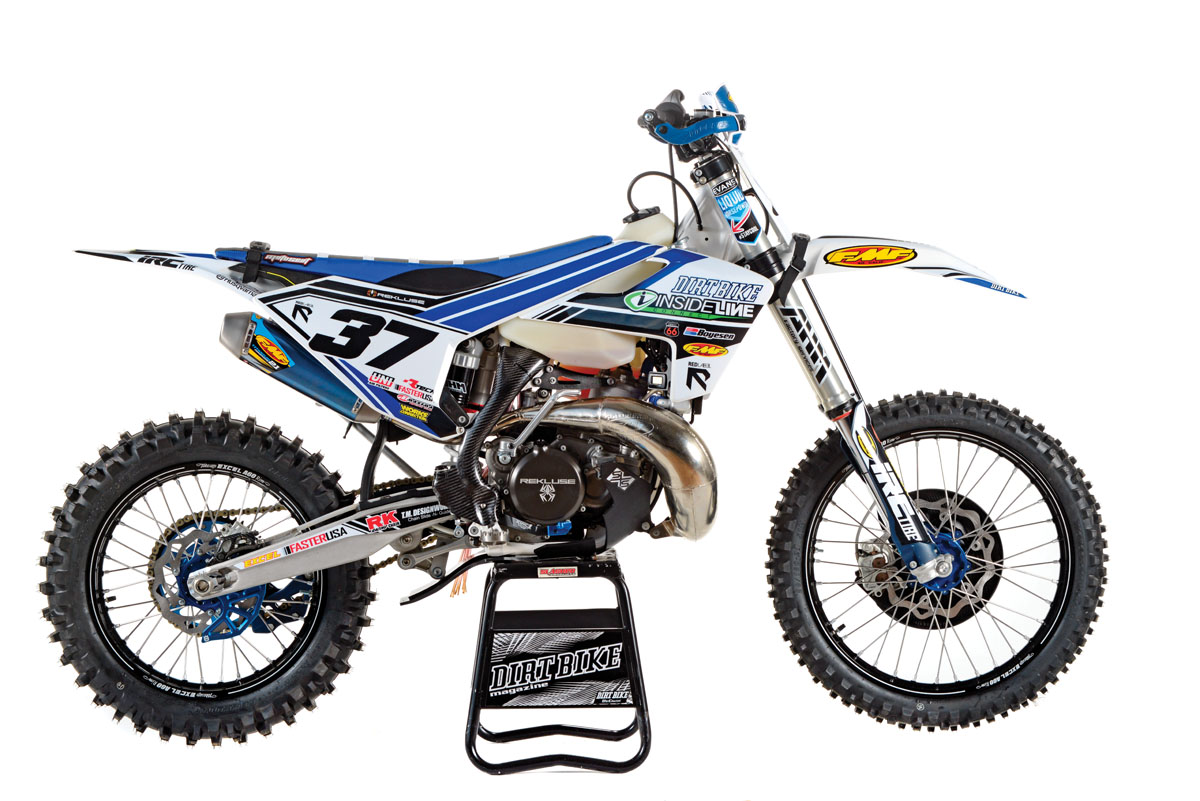 TERMS AND CONDITIONS
Not every bike that starts the Last Dog comes back as a wreck. For those who know how to prepare, it’s just another race. If you just sign up with a random bike without knowing what to expect, however, the race will take you down hard. There are logs, teeter-totters, waterholes and cliffs—lots of cliffs. Much of the damage occurs when a bike quits at an inopportune moment and then tumbles down some steep grade. A bike built specifically for the Last Dog requires attention in two main areas—it has to be able to survive a flip or two, and it can never, ever quit.
Jason purchased our 2017 Husqvarna TX300 test bike from the people at Husky. That particular machine was already on the blacklist at Dirt Bike. Mark Tilley had crashed it and earned a night in the hospital. Hapa didn’t let that bother him, though. It was the right bike and he knew it. The TX300 is new for this year, and it’s pretty much the extreme bike of choice. It’s very similar to what Graham Jarvis used to win almost every extreme enduro in Europe, and it’s what Colton Haaker used to win the King of the Motos in the Mojave Desert this past February. The 300 motor has the amazing ability to go both very slow and very fast. You can drag the motor down to a crawl and it won’t die or stall. Then, you just open the throttle and it recovers without complaint. That whole four-stroke flame-out thing never happens. This year, the Husky lost considerable weight. It weighs 220 pounds without fuel. That makes a big difference in a race like Last Dog Standing, where you often have to lift and push your bike through a section. 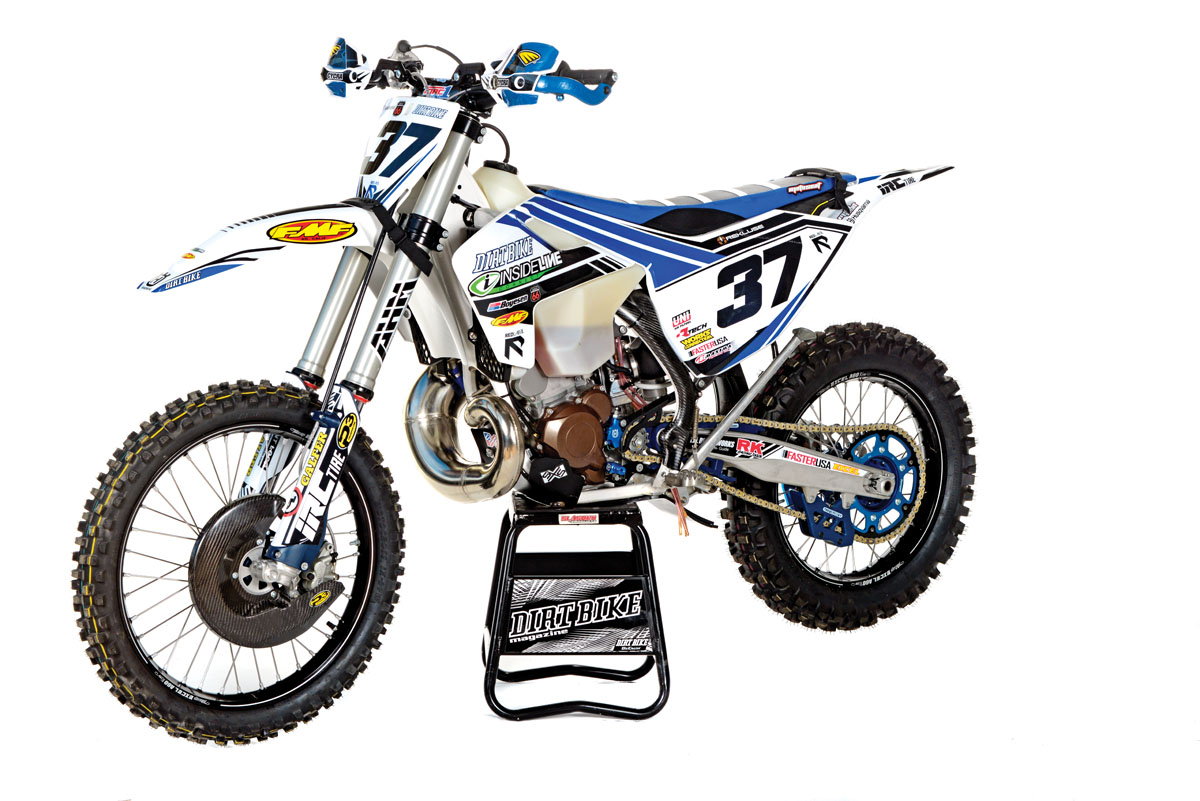 THE PARTS
The main ingredient for the Hapavarna is the Rekluse Radius X fully automatic clutch. When you start off with a bike that’s difficult to stall, the Rekluse makes it unstoppable. The Rekluse combines a normally operating hand clutch with the auto feature. You can use and abuse the clutch just as you would on a normal bike, but you don’t have to. When you stomp on the rear brake and come to a complete and sudden stop, the motor keeps running, even if you don’t touch the hand clutch. The Radius X is new to the company and uses additional, very thin plates to give the clutch more surface area and durability.
This year the Husky motor is so new that many of the aftermarket parts are new too. This bike got one of the first FMF Gnarly pipes with a 2.1 silencer. What makes the Gnarly system good for this race is that it’s constructed from 18-gauge steel, making it much more crush-proof. The motor also got new Boyesen Carbon Tech reeds, which are more durable than the stockers.
If you’ve ever seen photos from Last Dog Standing, you have probably noticed that the bikes are typically emerging from a cloud of steam. Unless your name is Cody or Colton, you will overheat your bike. This is the biggest reason for not finishing the race. A bike will lose all its coolant, and then it’s only a matter of time before it stops running. Jason took several measures to keep this from happening. First of all, he used Evans waterless coolant. This will stop coolant loss but not necessarily the overheating. To keep the engine cooler, you need a fan, which the TX doesn’t have. Trail Tech offers one, and also has radiator guards to prevent crash damage there. Samco radiator hoses are another detail for added durability. The final touch will be a Boyesen SuperCooler water pump for more efficient coolant circulation, but that’s not available yet for this model. After the motor was handled, AHM rebuilt the suspension, especially for this one race.
IRC Rubber has made a special effort for extreme bikes like this. The new Gekkota Enduro IX09W is unlike any other tire on the market. The rubber is super soft and gummy, and the casing is extra flexible. The result tires hook up like crazy on hard surfaces.
Most of the remaining pieces are items that will either protect the bike in a sky-ground-sky scenario or just help it survive better than stock stuff. The wheels are from Faster USA and built with Excel rims. The handguards are full wraps from Cycra. The shrouds and number plates are from R-Tech, and SXS offers a skid plate with a linkage protector.

PRE-DOG TESTING
The biggest mistake that Jason made with this bike is that he finished it too early. It was ready to go four months before the race. The second biggest mistake was that he gave it to us. Remember what happened when we gave a bike to Jason? We had four months to create the same amount of damage that Jason accomplished in a day.
We didn’t, though. We did, however, keep the bike through the best days of the Southern California riding season—that’s the rainy part of winter here, and, man, the riding was good this season.
Three things stand out about the Hapavarna: First, it’s a Husky 300. That alone makes it a winner. If you ride difficult off-road trails, the bike is simply incredible, and that’s before any modifications. The next thing that stands out is the clutch. It allows you to change your whole riding style. Trails that you normally do in first or second are possible in second or third gear. If a bike is unstallable, you eventually find yourself riding in a taller gear. With the Husky, the low-end power is so good that you sometimes forget to downshift and end up riding trials-like sections in absurdly tall gears. There’s no real downside to that, unless you burn up the clutch. That hasn’t happened yet, so we assume it’s not an issue. And the third great aspect of this particular bike is the traction. The Gekkota rear tire hooks up in places that seem impossible. Frankly, we don’t want to climb vertical rocks and hills, but the rear tire seems fine with it. The front gets great traction, too, but doesn’t like higher speeds. The soft casing can roll slightly, especially if the tire pressure is low.
Sadly, we love this bike too much to abuse it. It would have been sweet payback to ride every LDS section we can find in the hills around Glen Helen, then give the bike back in a dustpan—but that’s not our style.
Besides, we don’t have to. Jason will do that for us. 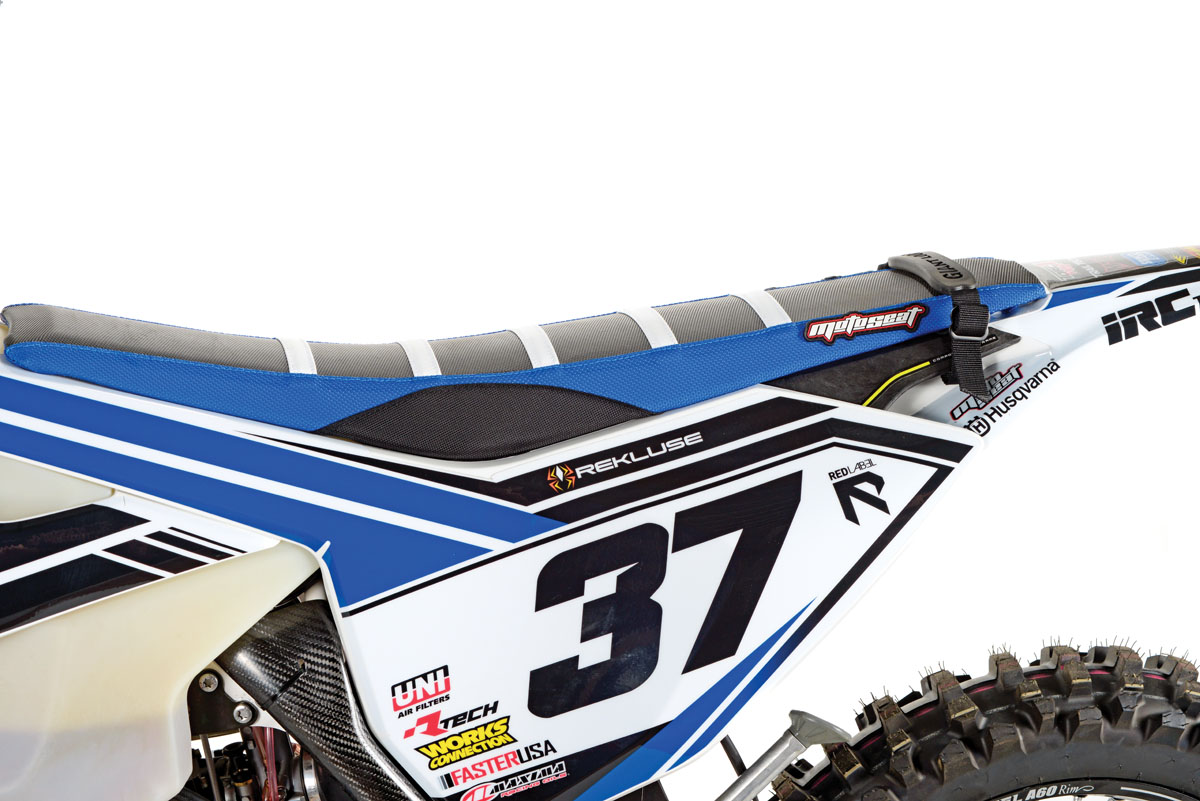