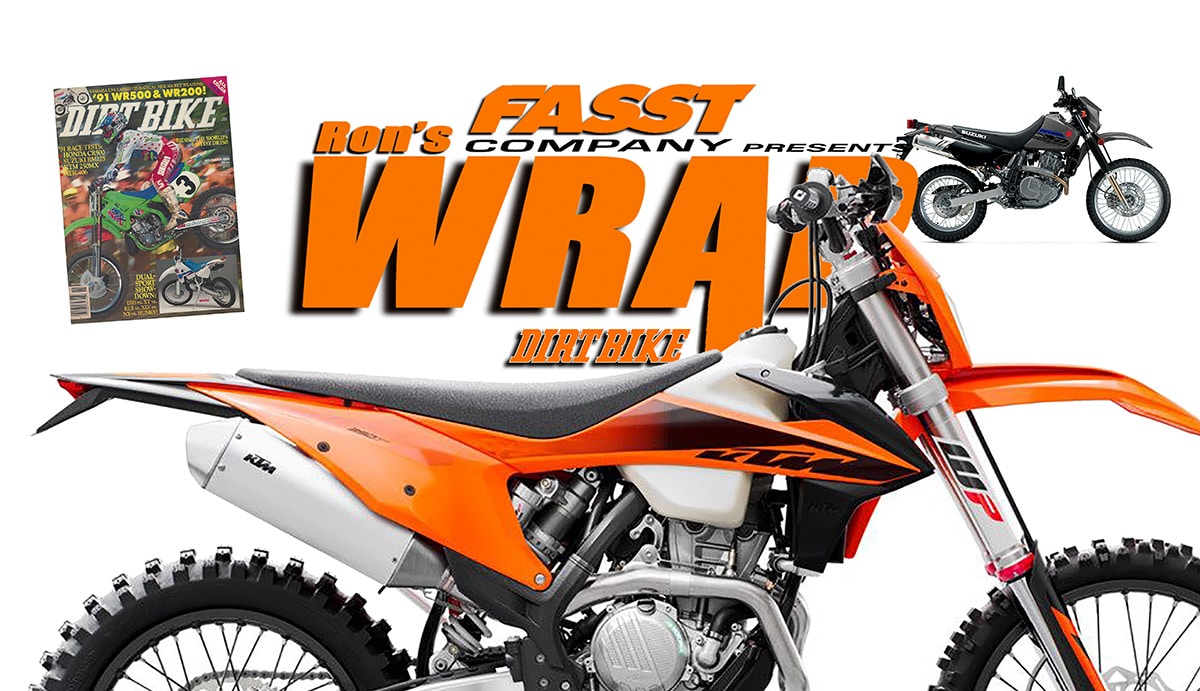 Pop the champagne; KTM is back in the business of making off-road four-strokes. The second wave of 2020 KTM models was announced this week and the most significant news was the return of the XCF-W line. These were dropped a few years back when emission rules for off-road bikes became tighter. KTM told us that the EXC Dual-sport line was good enough to satisfy that need. Now, KTM has done an about face. The new 500XCF-W and 350XCF-W are full-fledged dirt bikes without DOT lights and street equipment. They have full knobbies and off-road suspension settings.

Off-road bikes still have to meet EPA standards for noise and emissions, but those tests are not as strict as those for road bikes. The 500 and 350XCF-Ws have less restrictive mufflers than those used for the dual-sport bikes, richer EFI mapping and they do not have the reed valve in the air-intakes. That’s especially good news even for EXC buyers. Now, they can buy the air boot from the XCF-W for a quick (but unapproved) hop up. The XCF-Ws still have a fixed EFI system and is supposed to be locked and tamperproof for the end user.

The new off-road four-strokes and the dual-sport KTM will both get a new frame for 2020. It still uses PDS no-linkage rear suspension, but it’s otherwise inspired by the late-model motocross frame, which is stiffer. The forks on both lines will be the Xplor 48 with coil springs.

The other news that was announced without much fanfare was that the 150XC-W two-stroke now uses TPI fuel injection. A week earlier, it was announced that the 300XC and 250XC would be fuel-injected, so now there is a clear division in KTM’s two-stroke line. All the motocross bikes have caburetors (the 50SX. 65SX, 125SX 150SX and 250SX) while all the off-road ones have Transfer Port Injection (the 150XC-W, 250XC, 300XC, 250XC-W and 300XC-W).

ALL HAIL THE SUZUKI DR650S

Suzuki announced its 2020 line this week with very little fanfare. There’s nothing new for any of the dirt bikes. But instead of busting Suzuki’s chops for what the company didn’t have, let’s celebrate one model that it does still have. The DR650L is still here! How about that? It still sells for $6699 and it still has a carburetor. I can’t think of any other full-size street-legal that EPA hasn’t forced to fuel injection.

ENDUROCROSS IS GONE, OR IS IT? 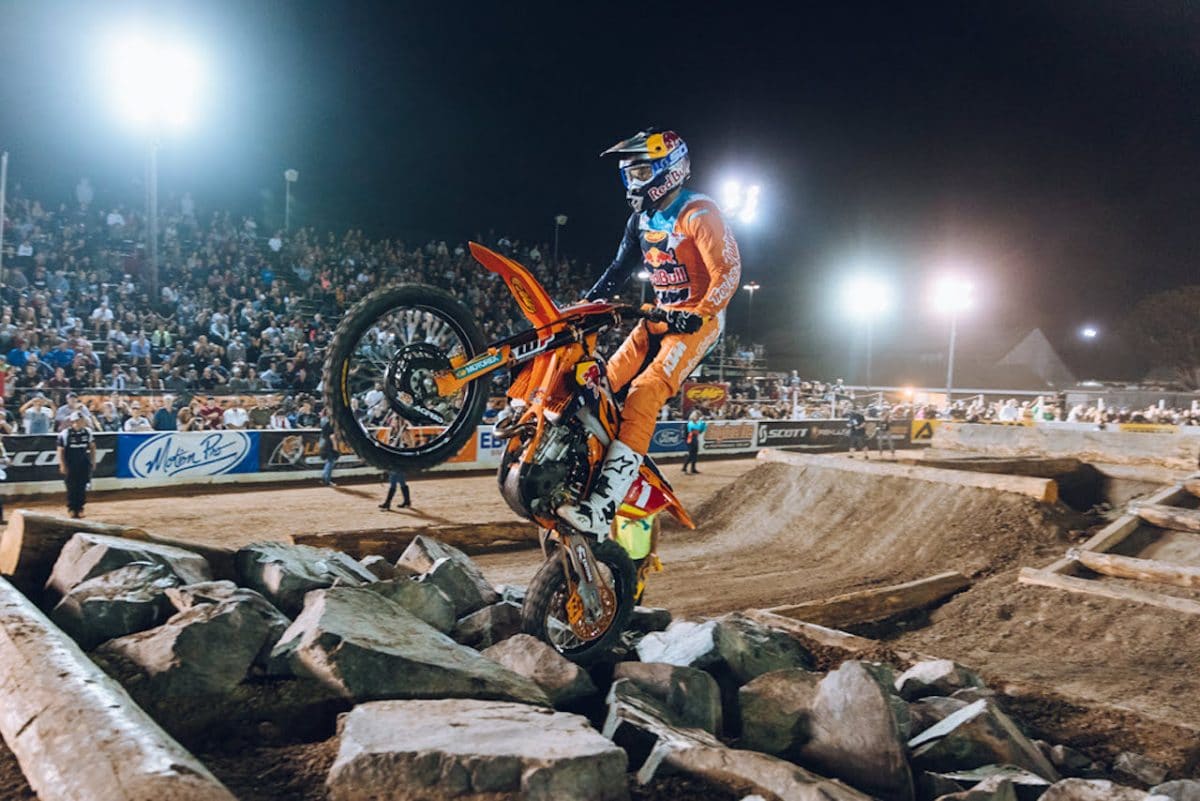 It came out this week that WHR Motorsports made the decision to cancel the 2019 EnduroCross series. The seven-round series was supposed to run from July 6, 2019 to October 26, running through six western states. This has been brewing for some time. EnduroCross has undergone several confusing changes in ownership since it was introduced to the U.S. by Eric Peronnard in 2006. So, it it over? Apparently not. Peronnard is back in the game and  rumor has it that he was already put together a replacement series with AMA blessing. We hear the official announcement will come on Monday.

LAST DOG STANDING TO BE TELEVISED

The Prairie Dogs MC and Desert MC are teaming up again to produce So Cal’s only Extreme Enduro on June 8-9 at Glen Helen Raceway. The Last Dog Standing is an annual festival of suffering and a regular showcase of Cody Webb’s superhuman abilities. This year the Prairie Dogs have announced that they will be producing an hour-long TV special to be aired on Mav TV at a later date. They also have announced that Erzberg winner Alfredo Gomez will be attending. Last year’s winner Kyle Redmond will not be there, but Cody Webb is coming as of now.

The week before the Last Dog, the crown jewel of extreme Enduro will be taking place in Austria. Here’s last year’s recap of the Erzberg Rodeo. This year it’s round three of the World Enduro Super Series and the only one that Colton Haaker and Cody Webb will be attending. You can watch it live on Red Bull TV starting at 5 a.m. PDT on June 1.

I looked up the first column I ever wrote for Dirt Bike last week. I don’t really remember it, but that’s what happens after 29 years. Rondo was a fictional character that was used in Dirt Bike back then for features like Mr Know-It-All. 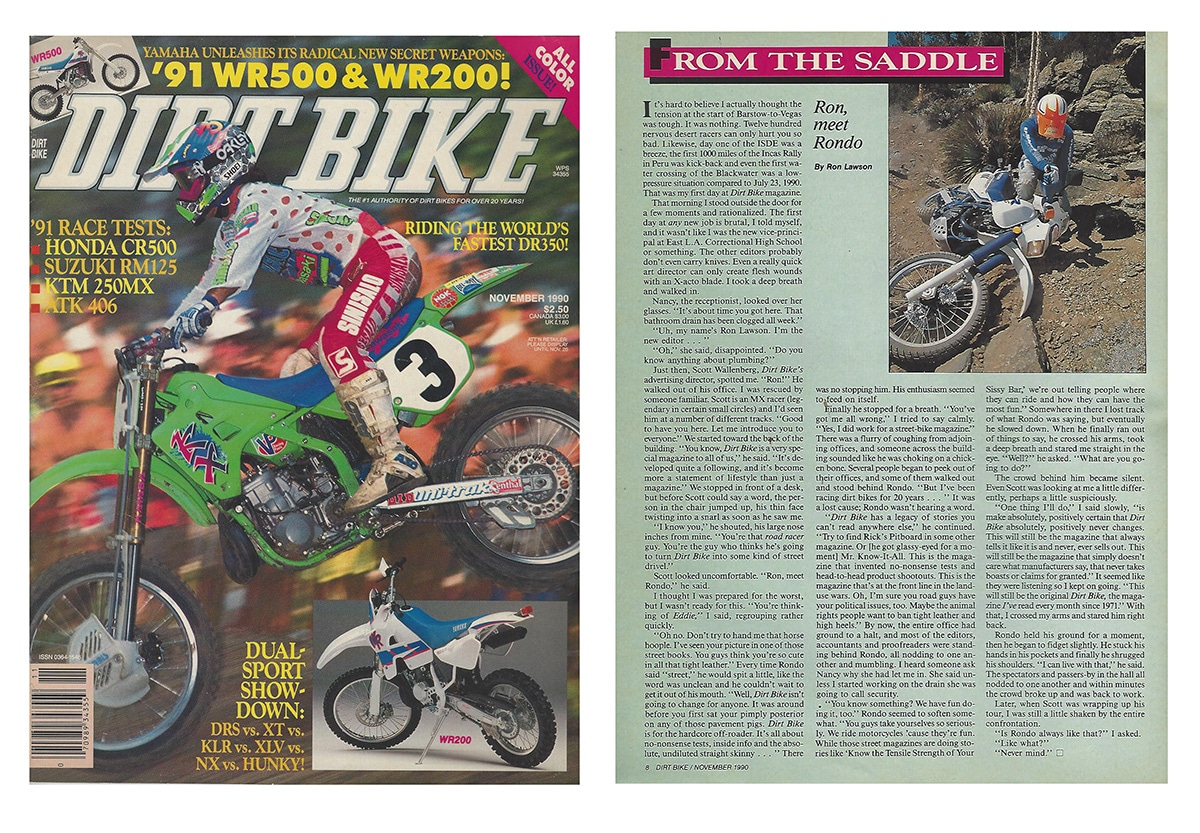 It’s hard to believe I actually thought the tension at the start of the Barstow-to-Vegas was tough. It was nothing. Twelve hundred nervous desert racers can only hurt you so bad. Likewise, day one of the ISDE was a breeze, the first 1000 miles of the Incas Rally in Peru was kick-back and even the first wa­ter-crossing of the Blackwater was a low-­pressure situation compared to July 23, 1990. That was my first day at Dirt Bike Magazine.

That morning l stood outside the door for a few moments and rationalized. The first day any new job is brutal, I told myself, and it wasn’t like I was the new vice-principal at East L.A. Correctional High School or something. The other editors probably don’t even carry knives. Even a really quick art director can only create flesh wounds with an Xacto blade. I took a deep breath and walked in. Nancy, the receptionist, looked over her glasses. “It’s about time you got here. That bathroom drain has been clogged all week.”

“My name’s Ron Lawson. I’m the new editor… ”
“Oh,” she said, disappointed. “Do you know anything  about plumbing?”
Just then, Scott Wallenberg, Dirt Bike’s advertising director spotted me. “Ron!” He walked out of his office. I was rescued by someone familiar. Scott is an MX racer (leg­endary in certain small circles) and I’d seen him at a number of different tracks. “Good to have you here. Let me introduce you to everyone.” We walked toward the back of the building ”You know, Dirt Bike is a very spe­cial magazine to all of us,” he said. “lt’s de­veloped quite a following, and it’s become more a statement of lifestyle than just a magazine.” We stopped in front of a desk, but before Scott could say a word, the per­son in the chair jumped up, his thin face twisting into snarl as soon as he saw me.
“I know you,” he shouted, his large nose inches from mine. “You’re that road racer guy. You’re the guy who thinks he’s going to turn Dirt Bike into some kind of street drivel.”

Scott looked uncomfortable. “Ron, meet Rondo,” he said.
I thought I was prepared for the worst, but I wasn’t ready for this. “You’re think­ing of Eddie,”I said, regrouping rather quickly.

“Don’t try to hand me that horse hoople. I’ve seen your picture in one of those street books. You guys think you’re so cute in all that tight leather.” Every time Rondo said “street,” he would spit a little, like the word was unclean and he couldn’t wait to get it out of his mouth. “Well, Dirt Bike isn’t going to change for anyone. It was around before you first sat your pimply posterior on any of those pavement pigs. Dirt Bike is for the hard core off-roader. It’s all about no-nonsense tests, inside info and the absolute, undiluted straight skinny…”

Eventually, he stopped for a breath. “You’ve got’ me all wrong,” I tried to say calmly. “Yes, I did work for a street-bike magazine.” There was  a flurry of coughing from adjoin­ing offices, and someone across the building sounded like he was choking on a chick­en bone. Several people began to peek out of their offices, and some of them walked out and stood behind Rondo. “But I’ve been racing dirt bikes for 20 years … ”

It was a lost cause. Rondo wasn’t hearing a word. “Dirt Bike has a legacy of stories you can’t read anywhere else,” he continued. “Try to find Rick’s Pitboard in some other magazine. Or (he got glassy-eyed for a mo­ment) Mr. Know-It-All. This is the maga­zine that invented no-nonsense tests and head-to-head product shootouts. This is the magazine that’s at the front line in the land­-use wars. Oh, I’m sure you road guys have your political issues, too. Maybe the animal rights people want to ban tight leather and high heels.” By now, the entire office had ground to a halt, and most of the editors, accountants and proofreaders were stand­ing behind Rondo, all nodding too each other and mumbling. I heard someone ask Nancy why she had let me in. She said un­less I started working on the drain she was
going to call security.

“You know something? We have fun do­ing  it, too.” Rondo seemed to soften some­what. “You guys take yourselves so serious­ly. We ride motorcycles ’cause they’re fun. While those street magazines are doing sto­ries like ‘Know the Tensile Strength of Your Sissy Bar,’ we’re out telling people where they can ride and how they can have the most fun.” Somewhere in there I lost track of what Rondo was saying, but eventually he slowed down. When he finally ran out of things to say, he crossed his arms, took a deep breath and stared me straight in the eye. “Well?” he asked. “What are you go­ing to do?”

The crowd behind him became silent. Even Scott was looking at me a little differ­ently, perhaps a little suspiciously.
“One thing I’ll do,” I said slowly, “is make absolutely, positively certain that Dirt Bike absolutely, positively never changes. This will still be the magazine that always tells if like it is and never, ever sells out. This will still be the magazine that simply doesn’t repeat what manufacturers say, that never takes boasts or claims for granted.” It seemed like they were listening so I kept on going. “This will still be the original Dirt Bike the maga­zine I’ve read every month since 1971.” With that, I crossed my arms and stared him right back.

Rondo held his ground for a moment, then he began to fidget slightly. He stuck his hands in his pockets and finally he shrugged his shoulders. “I can live with that,” he said. The spectators and passers-by in the hall nodded to one another and within minutes the crowd broke up and was back to work. Later, when Scott was wrapping up his tour, I was still a little shaken by the entire confrontation.
“Is Rondo always like that?” I asked.