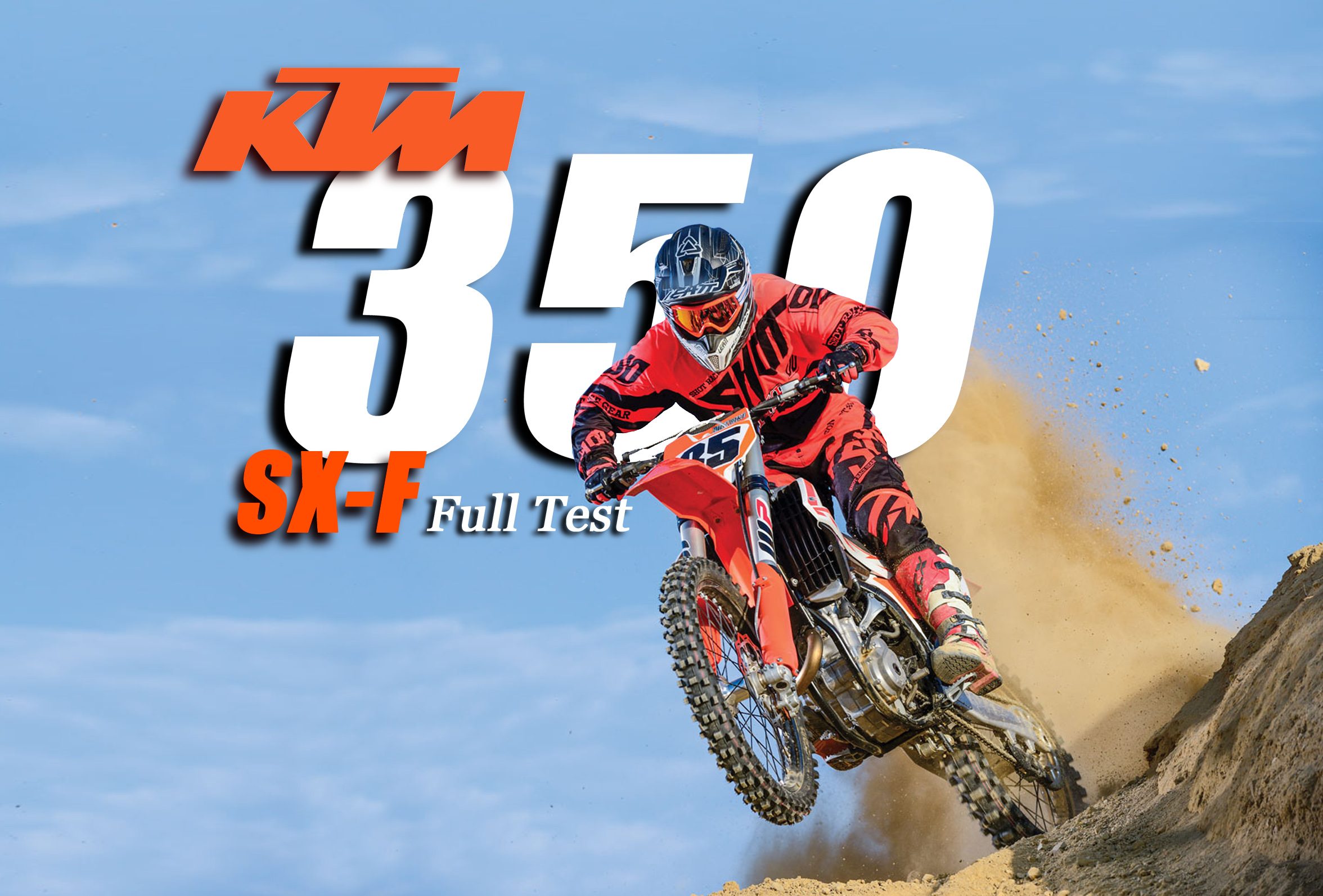 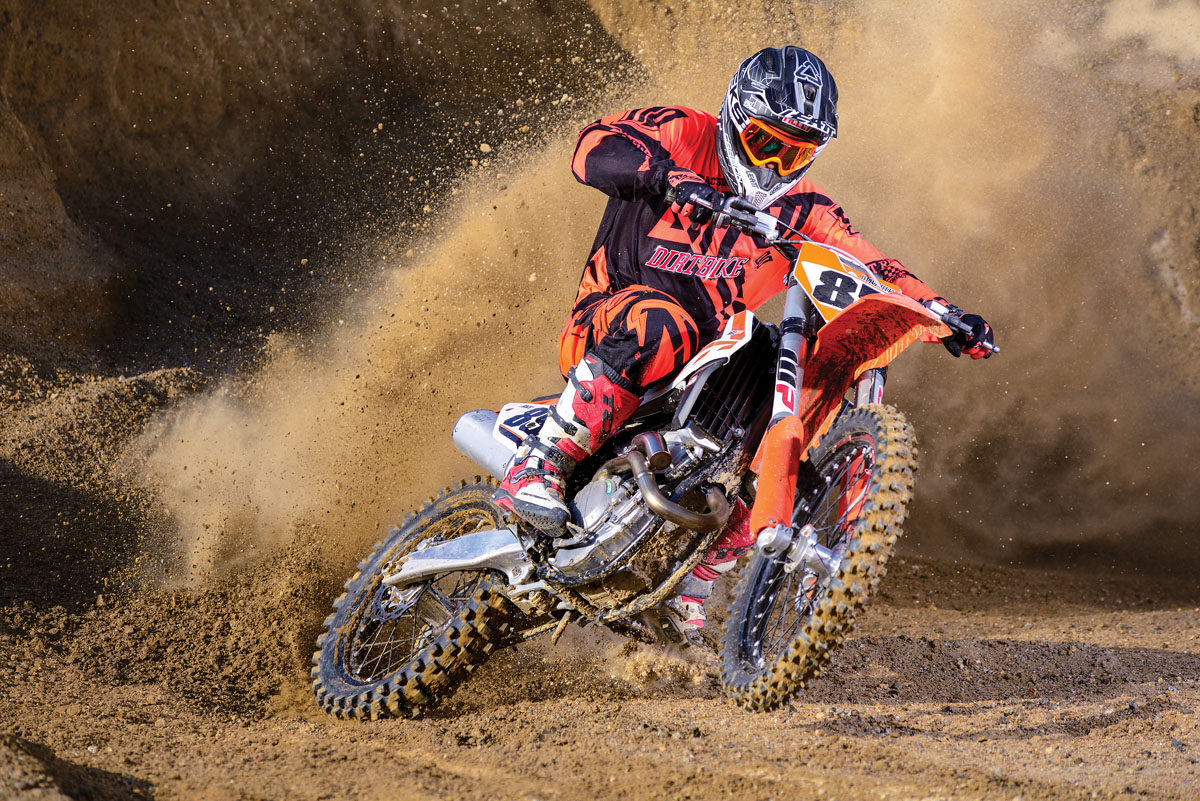 The fundamental laws of a capitalistic free economy seem to have broken down where the KTM 350 is concerned. The 350 has been KTM’s biggest seller for several years. It sells well in all configurations: off-road, dual-sport and MX. Yet, despite overwhelming evidence that riders are drawn to the middleweight motor format, no other factory offers one. KTM went so far as to create its own competition by offering a near twin in the Husqvarna FC350.
Have the laws of supply and demand broken down entirely, or did KTM do such a good job that it simply scared away everyone else? We don’t know, but the 2017 KTM 350SX-F is now available and even better. The longer other companies wait to produce a 350, the harder it’s going to be to catch up.

MIDDLEWEIGHT MANIA
In the motocross world, the KTM 350SX-F is forced to compete against 450s. It will probably never win a national championship in the U.S., and with Tony Cairoli moving up to a 450, it probably won’t win any more world MXGP titles. On top of that, it can’t win motocross shootouts against 450s, either. Yet, it continues to win amateur races everywhere. The reasons for this are somewhat humbling. Pro-level motocrossers prefer 450s because they’re pros. They’re strong, young and capable of exploiting any possible advantage. A 450 is more powerful and only slightly heavier, so why not train a little harder and hold on a little tighter?
That logic only works for 5 percent of the riding population in the U.S. For everyone else, the 350 has the perfect amount of power, and that secret is no secret anymore. That’s why so many riders have swallowed their pride and downsized to the 350.
For 2017 the biggest single change to the KTM 350SX-F is one that will eliminate the last reason that many riders were staying away. The new bike has a WP AER 48 fork to replace the 4CS. The AER 48 dispenses with coil springs in favor of a single air chamber in the left fork leg. That results in over 3 pounds of weight savings. More important, the internals of the new fork are completely redesigned. The damping functions are in the right leg and basically push more oil through reconfigured valve stacks. The air side of the fork has a fairly clever balance chamber that refills itself without the need for a second Schrader valve. This helps make the fork act more like a traditional spring. KTM also reconfigured the valving in the WP rear shock and gave it a softer spring.
Aside from the suspension news, the feature that lit up KTM forums is the traction control. On the left side of the handlebar is one button that allows you to change ignition maps and another that activates traction control. If you press both buttons at the same time, you temporarily switch into launch mode, which is like traction control squared. As everyone is quick to point out, traction control is banned by AMA Pro Racing. But, that rule pertains to a technology that requires wheel sensors where the front and rear wheel speeds are compared. This isn’t that. The KTM ignition simply watches for rapid increases in rpm and steps in to even things out. The same feature appeared on a Husaberg almost 10 years ago, and KTM has probably been working on it under wraps all this time.
Some of the unchanged parts of the bike are still impressive. The DOHC design uses finger-followers between the cam and valves, which are partially responsible for a red line that goes all the way up to 14,000 rpm. It still uses coil springs for the clutch and is one of only three bikes in the KTM lineup that doesn’t have the DDS diaphragm-spring design. It’s an electric-start-only bike (KTM having done away with the kickstarter three years ago). Last year it got a lithium battery, which is very light. In fact, the whole bike is amazing in that department. On the official Dirt Bike scale it weighs 221 pounds without fuel, which is the same as the new Kawasaki KX250F, and lighter than the 250s from Honda, Yamaha and Suzuki.

LIFE BETWEEN CLASSES
Let’s get the obvious out of the way: riding the 350SX-F is a little like riding a 250 and a little like riding a 450. For most riders, it’s the best of both worlds. But, it’s not for everyone. To clearly state the negatives up front, the 350 has a horsepower disadvantage that’s undeniable. If the distance between the start gate and the first turn is less than 400 feet, the 350 has just as good a chance as any 450 of getting the holeshot. At that distance it’s all about traction. Beyond 500 feet or so, horsepower takes over and the 350 will be helpless against bigger bikes. Besides that, whenever the throttle is absolutely wide open, a 450 will pull harder. Now, let’s return to reality. The amount of time that a typical 450 rider actually has the throttle pinned in any given race can be measured in seconds. If you doubt it, play back that last GoPro video you recorded and listen to your motor. Now, listen to a video of Ken Roczen. It doesn’t sound the same, does it?
The most legitimate complaint about most smaller bikes that that they’re more mentally demanding because you have to shift so precisely. That’s the real magic of the KTM 350. It has a powerband that’s every bit as broad as that of a 450. But whereas a 450 makes power on the bottom, the 350 revs and revs on top. By holding it open longer, you can get around most tracks with very few shifts—if you have to. The 350 can be the ultimate lazy man’s motorcycle. Sure, it’s not that pleasant to bounce off the rev limiter all the time, but by the same token, a 450 at low rpm isn’t that much fun, either, because of the stress of stalling. When you ride the 350 at the low end of the rpm scale, the power is decent enough to pull you out of a turn without the clutch, and you never feel like you’re on the brink of stalling.
This year the new on-the-fly map switch gives you some very subtle ways to fine-tune the powerband. Don’t think that the different ignition maps (or even the traction control) are going to change the bike into something it isn’t. It still feels like a KTM 350 no matter what mode it’s in. But, you can tell a difference if you pay attention. Map One is standard, and while Map Two is supposed to be more “aggressive,” it kind of depends on how you define the term. The bike doesn’t hit any harder; it just hits a little later. As for traction control, test riders come back with reports that are all over the board. Some say it does nothing; others report a huge difference. In the end, that makes perfect sense, because it all depends on how much traction you have in the first place. On a tacky track, it really has no effect. If the surface is either muddy or hard and slick, that’s when the feature is most noticeable. The biggest advantage seems to be in the suspension department. The bike actually goes a little straighter in choppy straights. Is it enough to make a difference in lap times? That’s almost impossible to say, because when traction is poor, lap times are notoriously inconsistent. We will say that the bike seems easier to ride with the TC engaged. 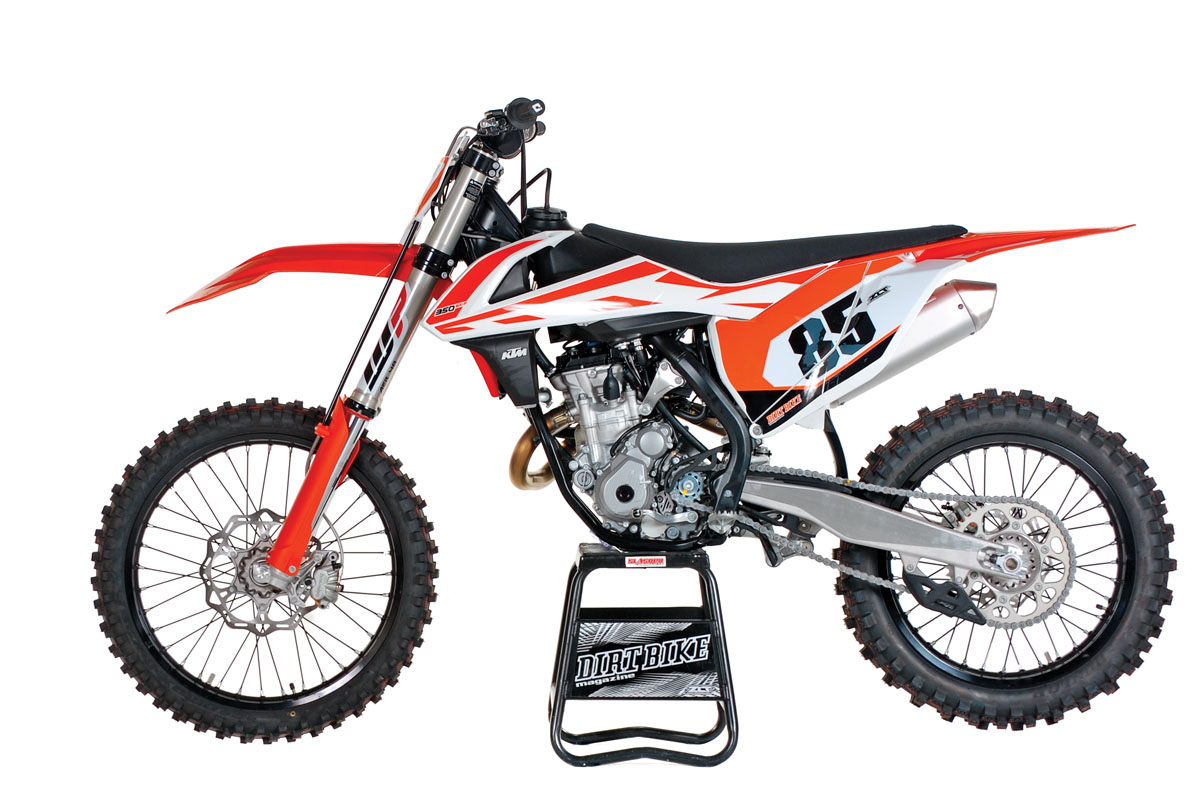 HOW ‘BOUT THAT FORK?
If you’ve ever read a KTM 350 test in the past, you know the bike gets rave reviews until the subject of suspension comes up. The 350 has been handicapped by one bad fork after another since its introduction. That’s changed. The AER 48 isn’t just an improvement over the previous fork. It’s actually good enough to be called an advantage. The small bumps that used to drive KTM riders crazy are no longer a concern, and the bike responds well to fine-tuning. We used to say that changes in pressure should be a last resort when tuning air forks. That’s because most have multiple chambers that affect one another. In that case, you can go up or down a pound or two so easily; it’s hard to mess up. You simply have to be aware that after practice there’s about a 2-psi increase in pressure due to temperature. You also need to remember to bleed air from the left leg. In this case, we liked the air pressure lower than the recommended setting—somewhere around the 150-psi mark.
The rear suspension on the KTM is excellent, too, just like it’s been for years. We have to confess that with such a good fork, the rear shock gets more criticism, but that’s just human nature. Overall, handling is the bike’s strongest asset. It feels light and easy to toss around. It turns well and has such outstanding brakes that it’s easy to out-brake a bigger bike and then hold the inside line.
Complaints are few. Some riders whine that the clutch pull is hard. The ignition’s launch control is very hard to activate and of questionable effectiveness. And, if you sit on the start line with the motor running too long, it will boil over. Last year KTM had a wheel recall due to chronic broken spokes, but it seems that the 2017 model has much stronger wheels. Just remember to watch the spokes carefully.
We know; pretty minor stuff. Overall, it’s hard to come up with complaints when you’re a true believer. And virtually everyone on staff has swallowed his pride and come to admit that he loves the 350. There are no Roczens, Tomacs or Dungeys here. Those who think otherwise are welcome to stay on the 450 train. For now, that includes Honda, Kawasaki, Yamaha and Suzuki.
Eventually, they’ll come around too.
PRAISE

FROM SNOWMOBILER ACER TO ERZBERG FINISHER