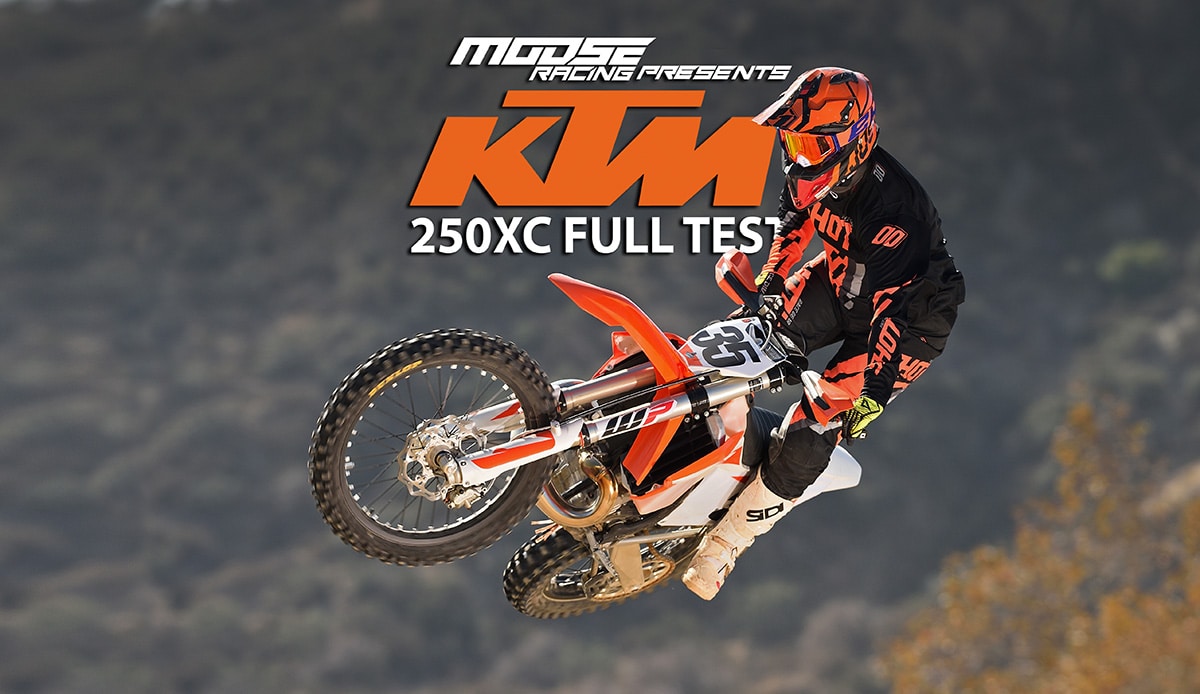 KTM treats two-strokes with the same respect that it gives four-strokes. That’s apparent when you look at the 2019 KTM 250XC. For 2019 it got the same chassis changes as the KTM 450SX: a new frame, new bodywork and so on. What the bike didn’t get is just as important. It didn’t get KTM’s TPI electronic fuel injection. The more off-road-oriented 250XC-W and 300XC-W did.

WHAT’S AN XC ANYWAY?
KTM’s multi-leveled structure for model designations has always been hard to follow. It’s all about the suffix, so pay attention. SX means “motocross,” and XC means “cross-country.” If there’s an “F” somewhere after that, it’s a four-stroke; if not, it’s a two-stroke. If there’s a “W,” it’s more of an off-road bike. In the U.S., there are no four-strokes that get the “W” suffix, because there’s too much overlap between those and the EXC dual-sport models. If you want an off-road four-stroke, you have to go full street-legal.

So, the KTM 250XC is an in-betweener; it’s more off-road-oriented than the 250SX two-stroke motocrosser and more race-oriented than the 250XC-W TPI. Mechanically, it leans heavily towards the motocross side of the street, which is why it didn’t get the new TPI fuel-injection technology like the “W” models. KTM did a good job with those bikes, but their primary reason for being is still emissions in Europe. They are capable of passing the Euro 4 emissions standard with various additional restrictors. Over here, all two-strokes are considered closed-course competition vehicles, regardless of fuel delivery. Carbureted two-strokes are a little lighter, less expensive and have snappier power delivery, so that system is used for the more race-oriented models. 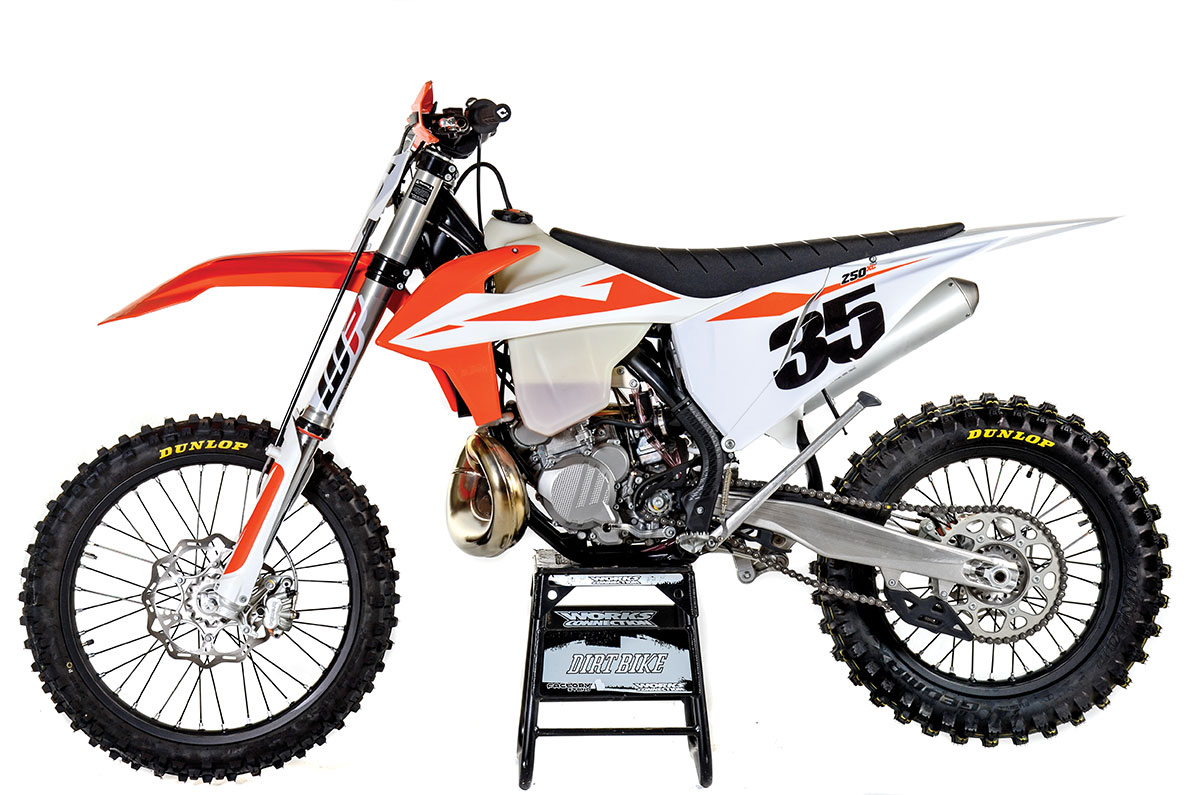 When we say that the XC leans towards the motocross side, we mean it is just like the motocross bike with a short list of differences:
1. Electric start.
2. A six-speed gearbox.
3. An 18-inch rear wheel.
4. A kickstand.
5. Handguards.
6. Dunlop AT81 tires.
7. Softer suspension valving and rear spring rate.
8. Different ignition mapping.

Just like the motocross bikes, the XC got a new frame for 2019 that is stiffer in all planes. There’s new bodywork, a new airbox and some suspension changes. The XC models have the WP AER 45 air fork just like the motocross models, albeit with a softer recommended air level. The W models all come with the Xplor 48 coil spring and PDS no-linkage rear suspension.

WHAT’S IT ALL MEAN?
Bottom line: this might be the best all-purpose dirt bike there is. It has electric start with a full-moto 250cc two-stroke motor. It’s just as fast as the 250SX motocross bike, but that’s a bike that you have to kick like a 1946 Harley. Ugh! This is the one motorcycle to have in your garage if you’re an occasional racer who play rides or goes off-road most of the time.
Three years ago, KTM redesigned all its big two-stroke motors, incorporating a counterbalancer shaft to quell vibration. At the time, the 250SX got a little heat for being too explosive. The XC never got the same bad rap. It was always more manageable and still very fast. In the intervening years, KTM has made small changes to the cylinder, and now the motor is about as sweet as a 250 two-stroke can be. Throttle response is instant, and the power is rich and thick. It’s not as deep as a 450 motocross bike, but it’s not far off when it’s in the happy part of the powerband. Is it hard to stay in the magic rpm range? It depends on conditions. As with most two-strokes, when traction is good, life is wonderful. Using the clutch to regulate the motor rpm is easy, because the pull is light, actuation is exact and the motor is so responsive. When traction isn’t as good, the 250XC falls into the same trap as many other two-strokes. Clutch work becomes more difficult, and hooking up is an issue. But, the XC’s powerband isn’t as explosive as you might think. Even a hardened four-stroke rider can make a quick adjustment. And, of course, when the XC is in slow, super-technical terrain, you can run the motor at very low rpm without much fear of stalling.
There have been a number of jetting changes since this motor arrived, and the 2019 specs are the best yet. It never pings under a load, and most of the low-end leanness issues are gone. We say “most,” because it can still surge when you pull in the clutch in technical terrain. It’s most noticeable when the motor is on the verge of overheating, which is common when the bike is in first gear for extended sections. Many riders who specialize in technical stuff add an accessory fan.

ELECTRIC FEATHER
Two-strokes feel lighter than four-strokes, even when they aren’t. The 250XC weighs 222 pounds without fuel. That’s a little heavier than a 250 four-stroke motocross bike and only 2 pounds lighter than a KTM 450SX-F. We have to give credit to the four-stroke engineers who have accomplished what seemed impossible a few years ago—the weight gap between the two engine platforms has become irrelevant. But four-strokes still have a sensation of greater weight because of the gyroscopic forces of all those additional spinning parts. It’s like there’s an invisible hand pushing the bike in the direction it wants to go. The 250XC, on the other hand, can be manhandled and forced to do your will. It’s a very agreeable bike. How does that compare with the 250SX two-stroke motocross bike? The SX is around 10 pounds lighter because of the starter, the battery, the kickstand and so forth. It’s worth noting that the 250XC is one of the very few electric-start dirt bikes that still has a kickstarter as a back up.
The suspension components are the same as those of KTM’s four-stroke motocross bikes, which is a good thing. The WP AER 48 is still the best air fork ever made, and we prefer it over the Xplor fork that comes on KTM’s W models. The standard air pressure for the XC is 9.6 bar (139 pounds), which is a little soft for full moto and a little stiff for slow-speed off-road. In other words, it’s a good compromise. The rear end is a little on the soft side but responds well to the clickers. That’s the biggest advantage of the linkage rear suspension over the PDS design. It offers more latitude for adjustment. With PDS, you have a very limited preload range, so if you’re outside of the average weight, you’ll need a stiffer spring. 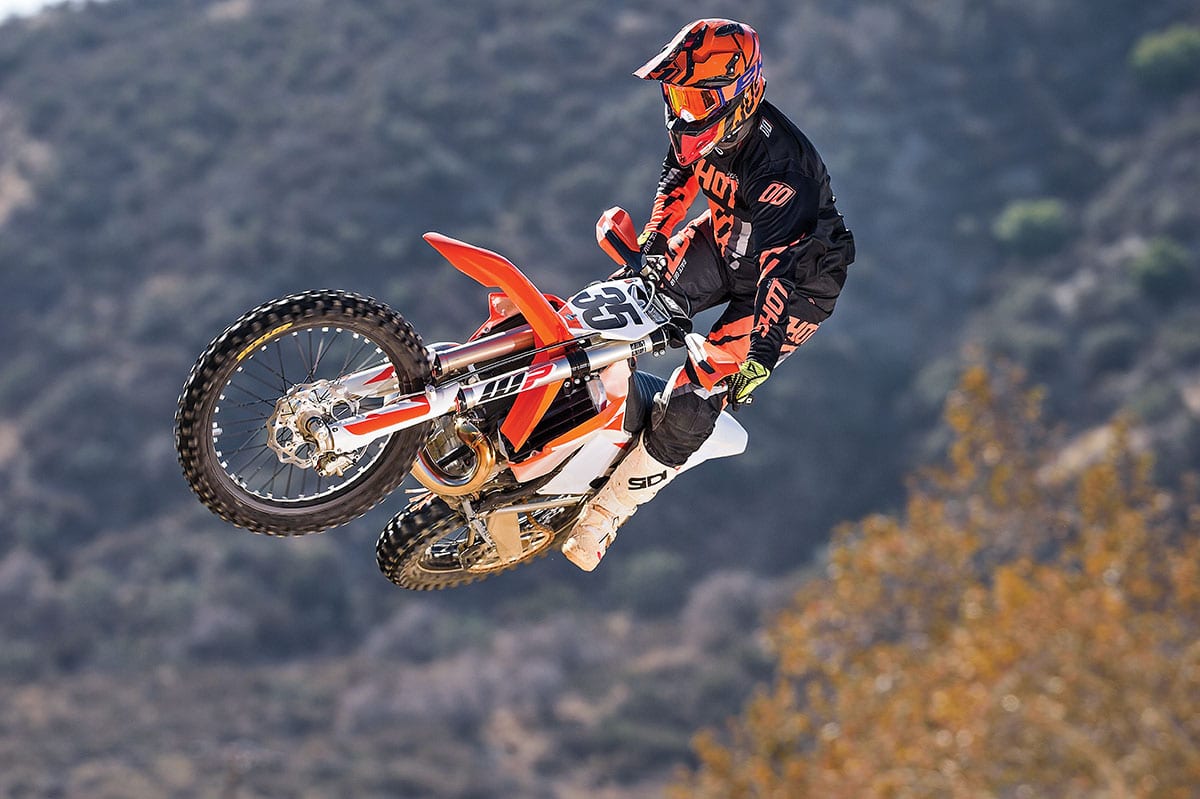 DO IT ALL
Usually, the problem with do-it-all bikes is that they don’t do anything very well. That’s not the case with the 250XC. Like most two-strokes, it’s a truly great trail bike, and as a racer, it has a distinct advantage over the bikes it competes with. Most organizations now place 250 four-strokes with 250 two-strokes. The 250XC is significantly faster than any production 250F. When you put all the pieces together, the XC makes sense. It’s the perfect machine for a one-dirt-bike garage. If you have room for another bike, you might consider getting two of them.