KAWASAKI KDX220: BEHIND THE BUILD 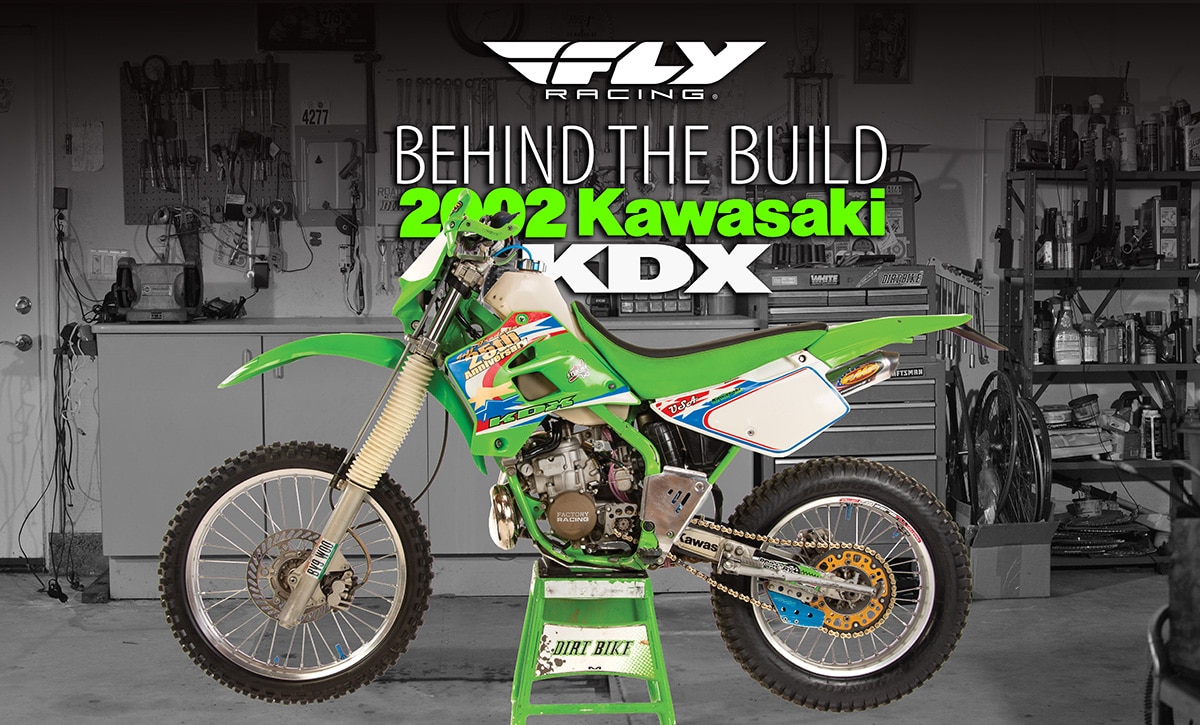 At one point in time, the Kawasaki KDX was one of the most popular motorcycles ever produced, and the strong following of riders to this day proves their loyalty. The bike was ultra-affordable, and the smiles-per-dollar ratio was hard to beat. Sure, in bone-stock form, it lacked the power and technology of its European competition, but you could not buy a more affordable bike with such hop-up potential. In 1995, Kawasaki produced an all-new model with a totally revised powerplant and chassis. This was the most modern the KDX would ever get, and it remained in this form until its disappearance in 2006. Although the 200 received nothing other than bold new graphics each year and a frame color change in 2003, the KDX220R that was introduced in 1997 was substantially stronger than the 200 in terms of on-tap power.

The best part of the KDX was that the hop-up possibilities were endless. Some riders left them stock and mild, while others turned them into full-blown racers that could give most 250 two-strokes a run for their money. Even with these mods, they wouldn’t break the bank, and the reliability remained true. This idea for this story came to mind as we hit a dry spell in off-road bike testing, and all the current off-road test bikes had gone back to the manufacturers. I go totally psycho when I can’t ride, and so my only option was to pull my 2002 KDX220R out of retirement.
This machine and I go way back. I have an intense passion for Kawasaki motorcycles, as I grew up in an era when the brand was dominating off-road racing. Larry Roeseler, Ty Davis, Danny Hamel, Destry Abbott, Paul Krause and, of course, Jeff Fredette were all winning on green machines, and it sparked my love for the brand. So, I purchased the KDX220R in 2009 from the original owner, and it was like new. I had been itching for a two-stroke enduro bike at the time and could not afford a European option. Luckily, my dad had a 1997 KDX200 that I loved riding, so I knew the bike was up to the task for the woods riding I do.

INSIDE THE GREEN STEED
One ride on the 220R proved that Kawasaki had implemented performance gains that the off-road woods pilot would crave. The 220R had strong gains in torque that would pull a gear higher than the 200 in all situations. This came from a smaller carburetor than the 200, a Keihin 33mm PWK instead of a 35mm PWK, a larger bore, of course, and model-specific porting. We threw on an FMF Gnarly pipe and Turbine Core spark arrestor silencer from day one, and it has been my go-to combination for all these years.

We dialed in the jetting for the higher elevations we spent most of the time riding. For over 10 years, we pounded the mountains of the Kern River Valley weekly in search of the best single-track loops. These bikes were just the ticket for this style of riding, and the reliability was unmatched. We knew the bikes would always get us out of any situation. They gave us the confidence to explore the deepest woods and gnarliest terrain without a care in the world. Can you say, “Simplicity”? Over those 10 years, we were rewarded with nearly maintenance-free machines. Chains, sprockets, brakes and fork seals were naturally changed when needed, but internally there was never a seal, gasket or anything that failed mechanically in the powerplant. The motors always remained sound. We fed them Yamalube R at 40:1. We were religious about clean air filters and also pulled them apart to clean the KIPS power valve. Over the years, we honestly never had a top-end failure. 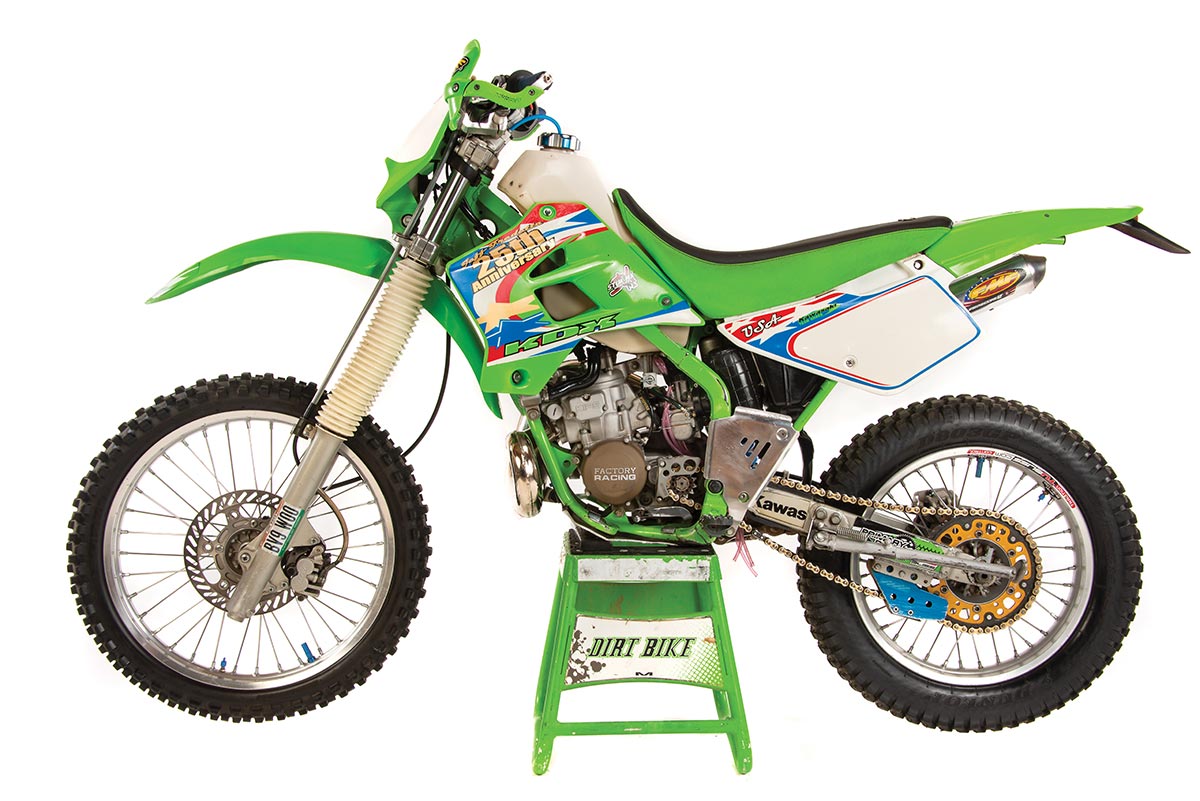 Last year I decided to go through the engine, mainly because it had endured many hundreds of hours (I’m being kind here because my machine had been ridden hard for 12 years) of high-end trail abuse and, since it is my backup machine, I certainly didn’t want it to grenade on me. I decided to tear both my dad’s bike and my bike down and replace the top ends and crankshafts. By this time, the cylinders were showing wear and the crankshafts were getting to the service limit in side-to-side play. The cylinders were sent to PowerSeal to get re-plated, and I located two new OEM crankshafts to install. All the transmission bearings and gears looked like new, so that was all re-used. This time around, I decided to install a V-Force 3 reed valve on the bikes to increase power and help with more consistent jetting.

Stock, the suspension is way too soft to be pushed hard, so stiffer Race Tech springs in the forks were mandatory upgrades. The shock spring rate worked well for my weight, but N2Dirt suspension did some work to massage the valving on the shock to improve performance at higher speeds. I kept the 7/8-inch handlebars but went with a Pro Taper CR High Bend and ran Cycra Pro Bend handguards for the pine-tree riding I like to do. Clarke Manufacturing makes a super-sano 3.6-gallon fuel tank that uses the stock shrouds and keeps the slim stock shape. For me, this was a must, as the two-stroke is thirsty, and I like to do 60-plus-mile rides.

MotoSeat offers a firm seat foam and a great gripper cover for the bike and is always my choice for replacement. For years I fit on a Maier rear motocross fender and Acerbis enduro taillight to modernize the look. IMS makes a great shifter, and I also run their super-stock pegs for a wider platform. Works Connection used to make the aluminum frame guards, but those are no longer available. Ultimately, I ended up with a Keihin 35mm PWK over the stock 33mm carburetor, which wore out, and used a V-Force 3 reed cage. Huge gains in power were made with these two mods. Jeff Fredette (the KDX icon) makes quite a few trick bits for the machines, and I use his billet chain-guide and shorter kick-starter. The graphics were a special design from Fredette himself and looked superb.

Down low, I run Supersprox sprockets for added durability. Everybody knows how much I love my trials tires, and I run a Dunlop 803GP in the rear and a Bridgestone M59 in the front. The KDX has a great linkage design, and it is tucked up out of harm’s way, but I run a Moose Racing skid plate for engine protection. Out back, the brakes are horrible. The rubber brake line flexes when you apply pressure, so there is no feel to the rear brake at all. I countered this with Galfer steel-braided lines and Galfer rotors.

PROS AND CONS
So, what are the pros and cons of owning an old machine? Given the reliability of the bike, there isn’t too much to worry about. The motor is quite impressive to this day. The lug-ability is superb, and the bike will crawl at trials speeds happily all day. But, the parts availability from Kawasaki is drying up, and that scares me a bit. Oddly enough, the machine has the original chassis and linkage bearings. Proper maintenance has been key here. The biggest issues have been jetting and tuning for elevation and temperature changes. Being a test rider, I’m blessed with the opportunity to ride the latest and greatest bikes. Once back on my machine, I realized what it was like to deal with a carbureted bike again. I did come to learn that something internally was worn on my stock carburetor beyond my knowledge, and replacing it with the new Keihin 35mm PWK has cured most of the tuning issues. Still, it is not as nice as an EFI unit.

It amazes me that after all this time my 220 is still a competent trail machine. Jordan Ashburn proved last year that the bike can still compete in hard enduro (racing the TKO), and that also sparked my interest in the bike again. I will probably never sell the machine, as it’s too sentimental now. I hope that Kawasaki is reading this, because I’d like to end this story with a request. Kawasaki, can you please revive the KDX line? I’m sure a massive following of riders would show up at dealers all over. I’d be the first one waiting in line.