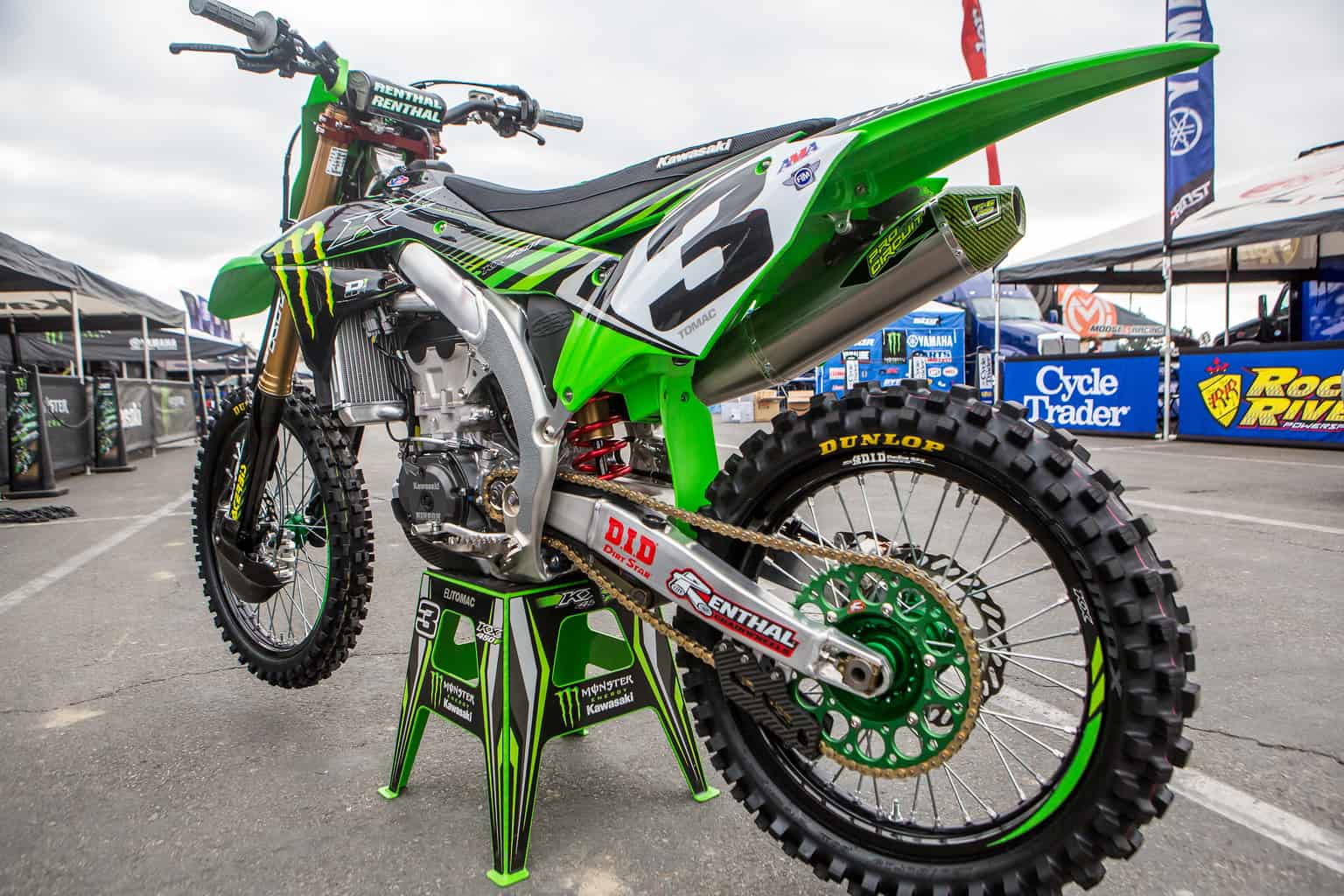 We were fortunate enough to spend some time shooting photos & video of Eli Tomac’s Monster Energy 2018 Kawasaki KX450F and sit down with his mechanic Brian Kranz to hear about all the trick goodies the factory team is running for 2018. 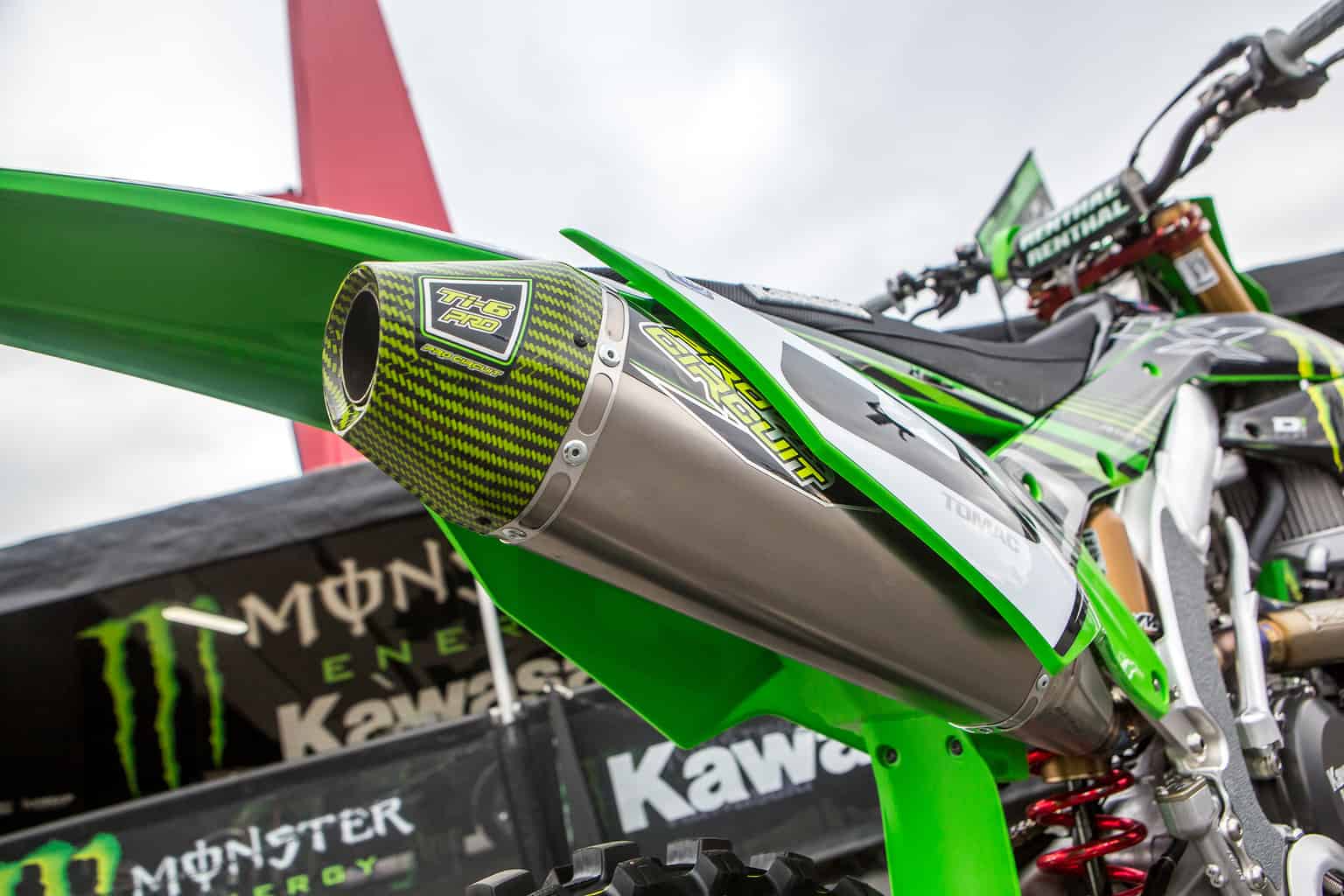 Pro Circuit is again helping the Factory Kawasaki team with exhaust in 2018. Brian explained that if the team needs something special for a weekend of racing, Pro Circuit can put something together to complement the motor package quickly. While exhaust played a more important role in the old days, most of the tuning now  is in the mapping when it comes to elevation change and things like that. 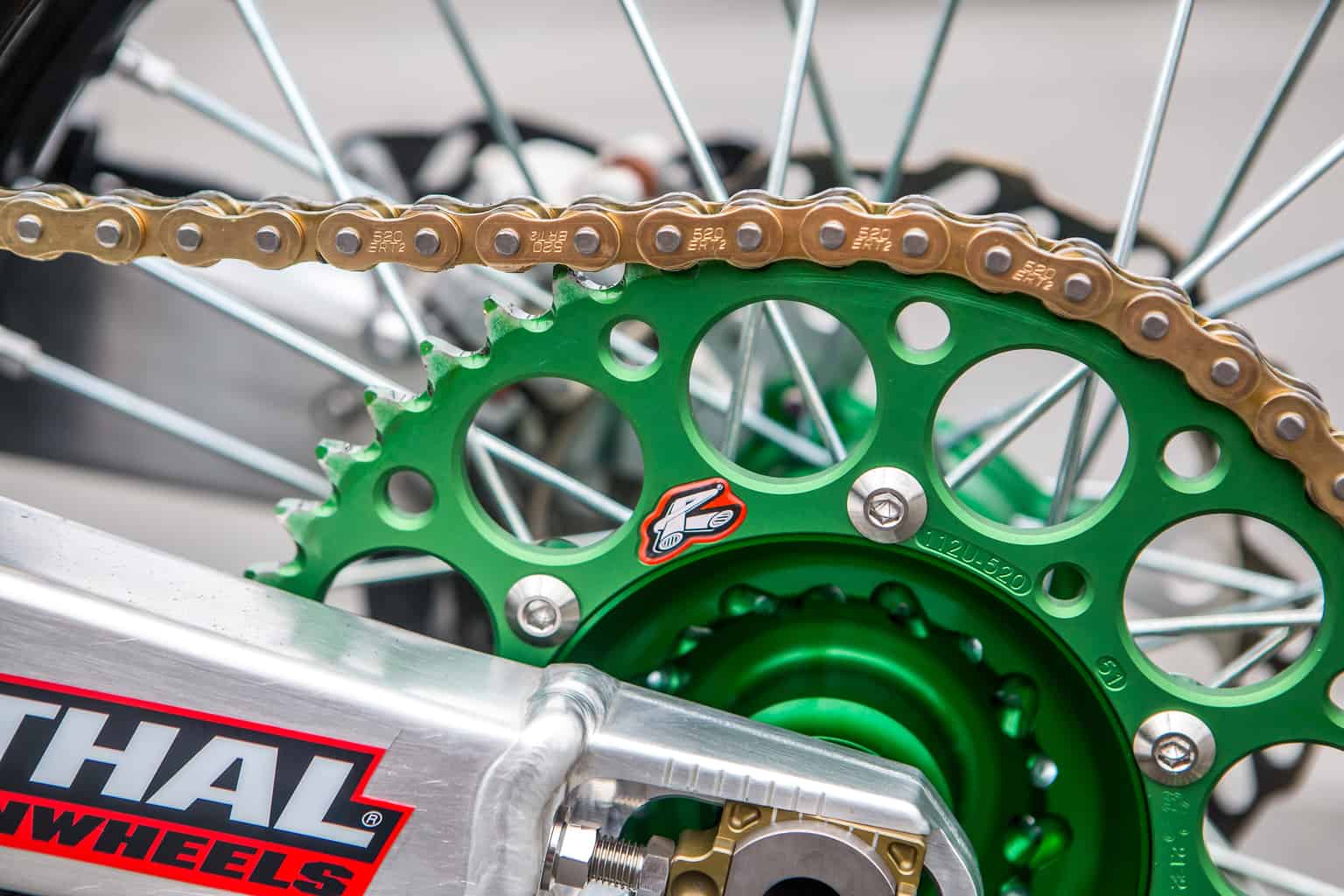 Eli is running a 51 tooth rear sprocket by Renthal out back and wrapped around that is a DID 520 ERT2 gold chain. Brian said they will make adjustments to the size of the sprocket on tracks like Daytona but for the most part the team sticks close to one or two sprocket combos. 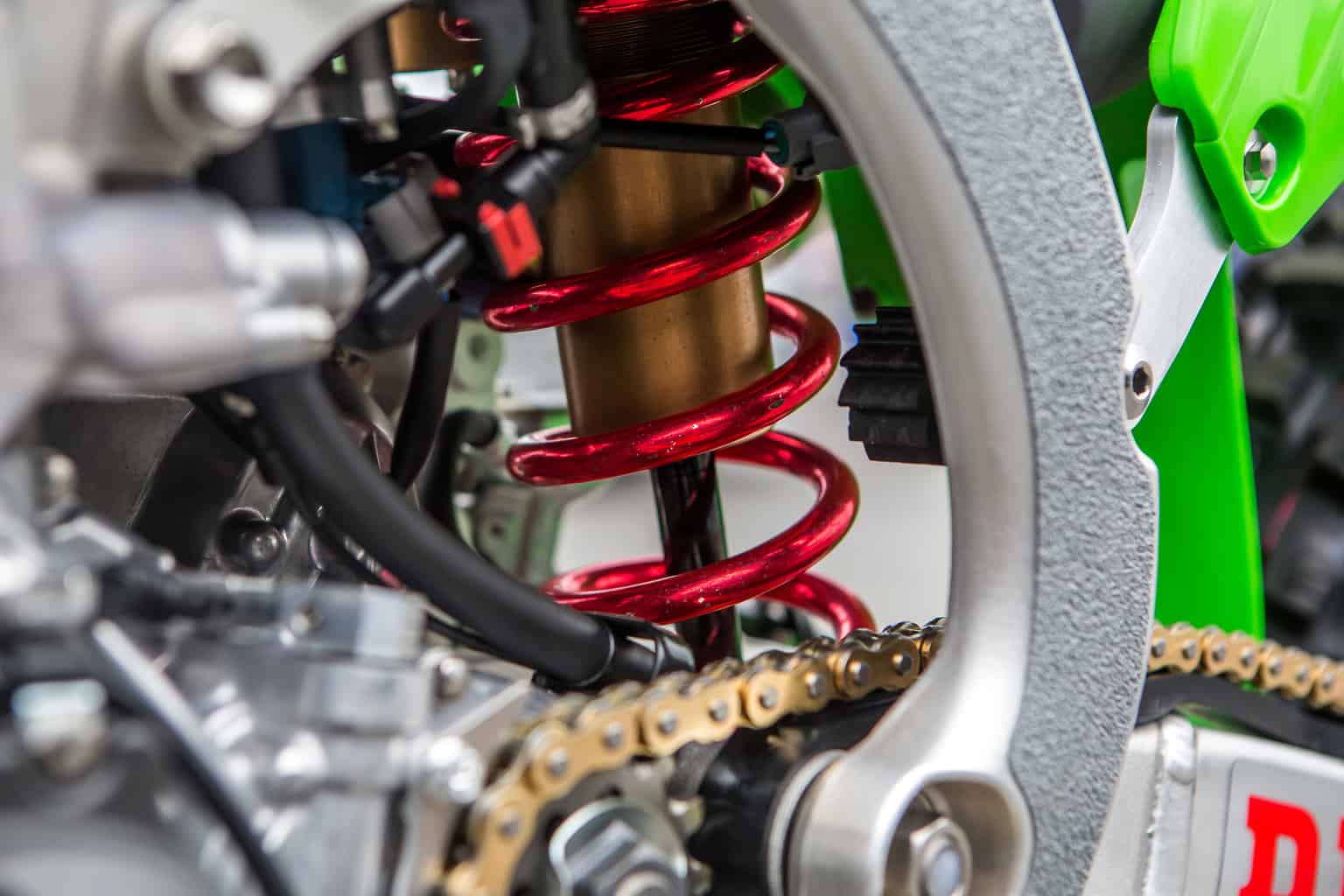 Out back the KYB shock is massaged to Eli’s liking and finished off with this red anodized color spring to give it some bling. 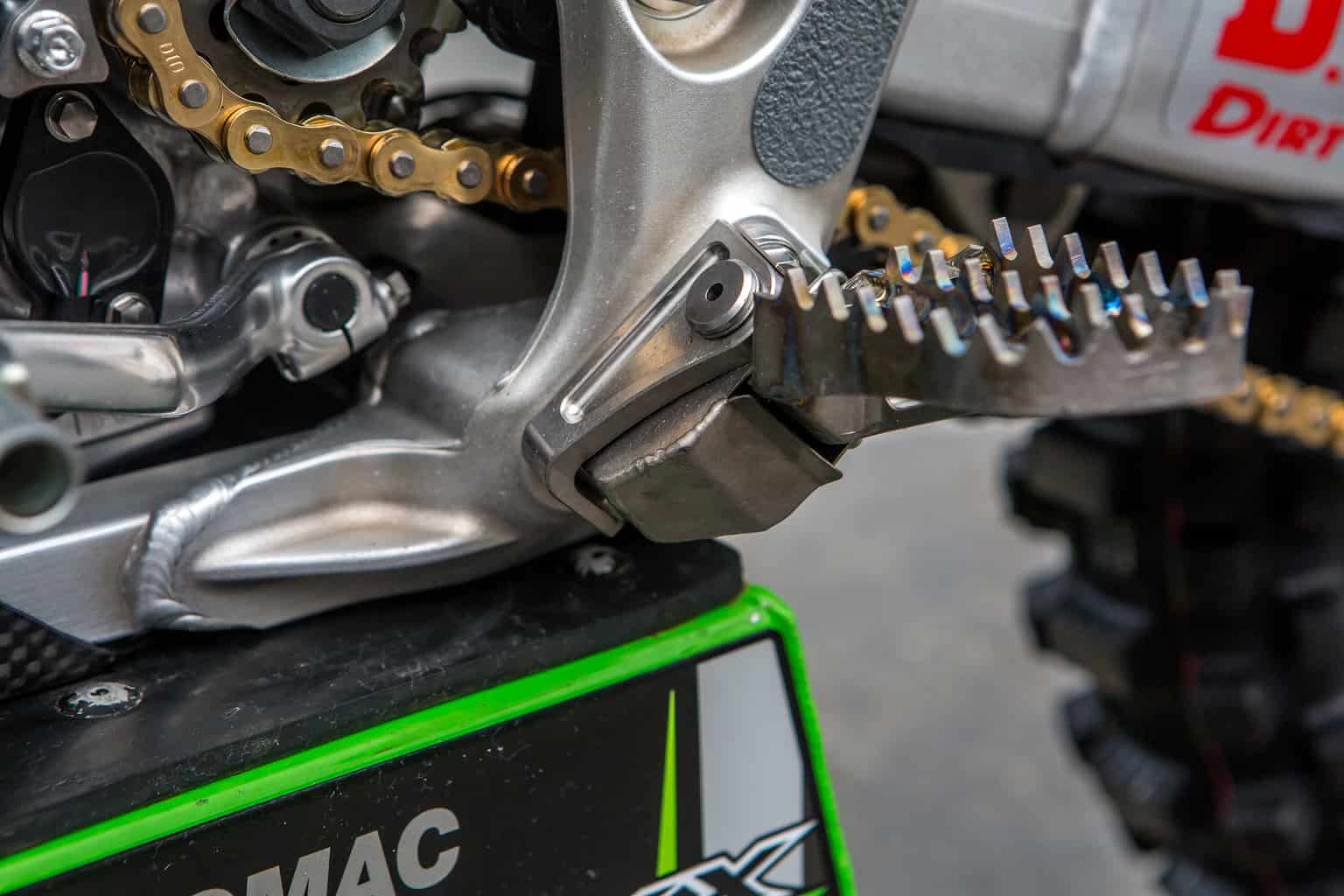 Up close you’ll notice the foot peg mounts and guards. Most of the pieces are done by CNC and the rest in house by their in house fabrication team . This design will allow the foot pegs from being penetrated by rocks or caked up with mud during a race. 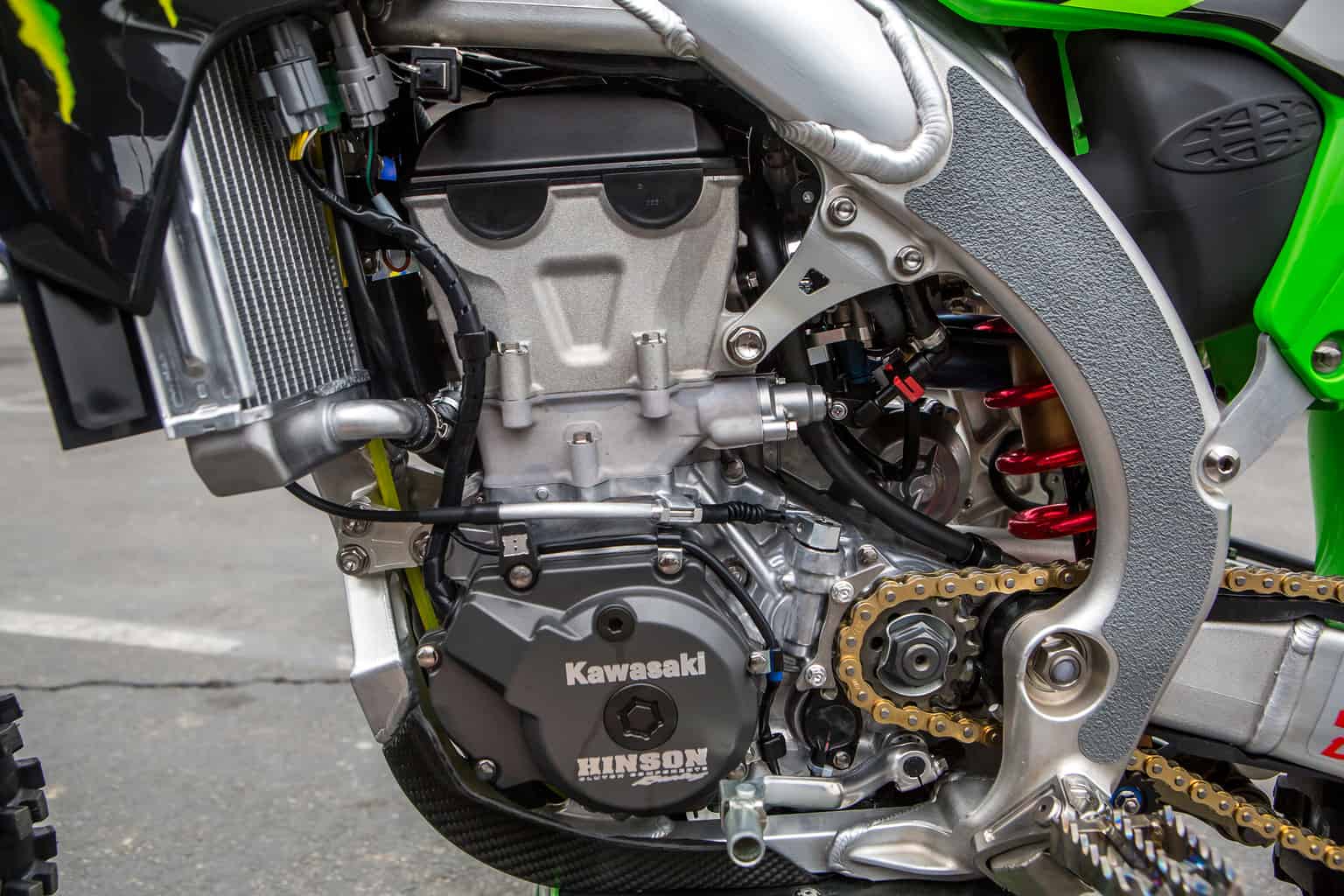 The motors are done in house at Kawasaki. They will fine tune the motor and do testing with each rider to get it closer to their preference. Eli and Josh will change clutch engagement, pull of the motor, and overall characteristics to better suit their riding styles.If you look closely, you’ll notice the head stays (motor mounts) have holes in the center of them. This is to change the flex characteristics of the bike. Husqvarna and KTM are doing simliar modifications to their bikes by providing carbon instead of the forged aluminum that the stock bikes offer. In addition to the exhaust, Kawasaki is now running a Pro Circuit air boot for 2018. 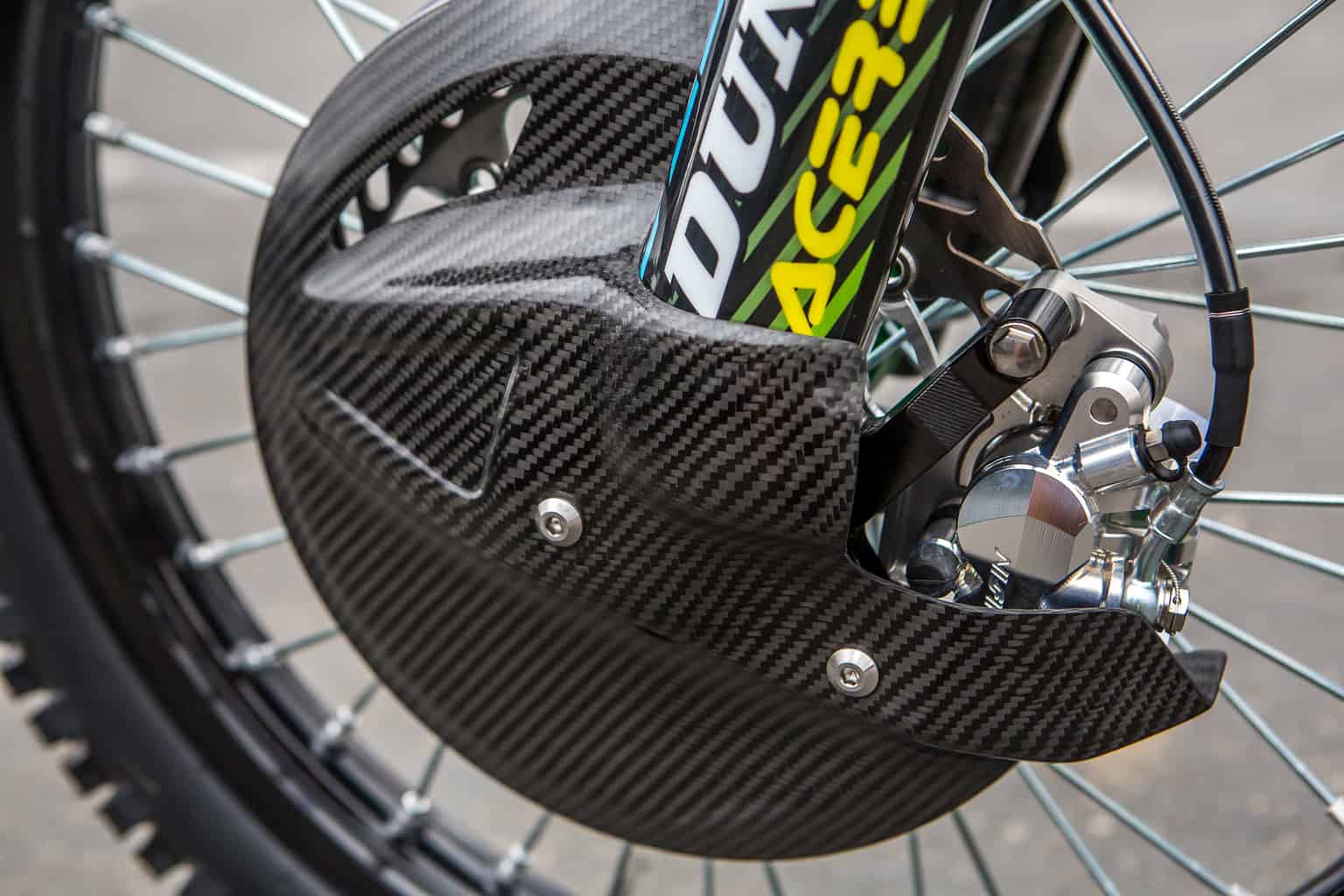 Eli’s bike has been built to be fast and very protected from potential debris strikes. Here you will see the 270mm front rotor and billet Nissin caliper protected by this carbon guard by Carbon Spider. Carbon Spider actually provides a lot of the protection on Eli’s bike including skid plate, chain guide, and water pump covers. 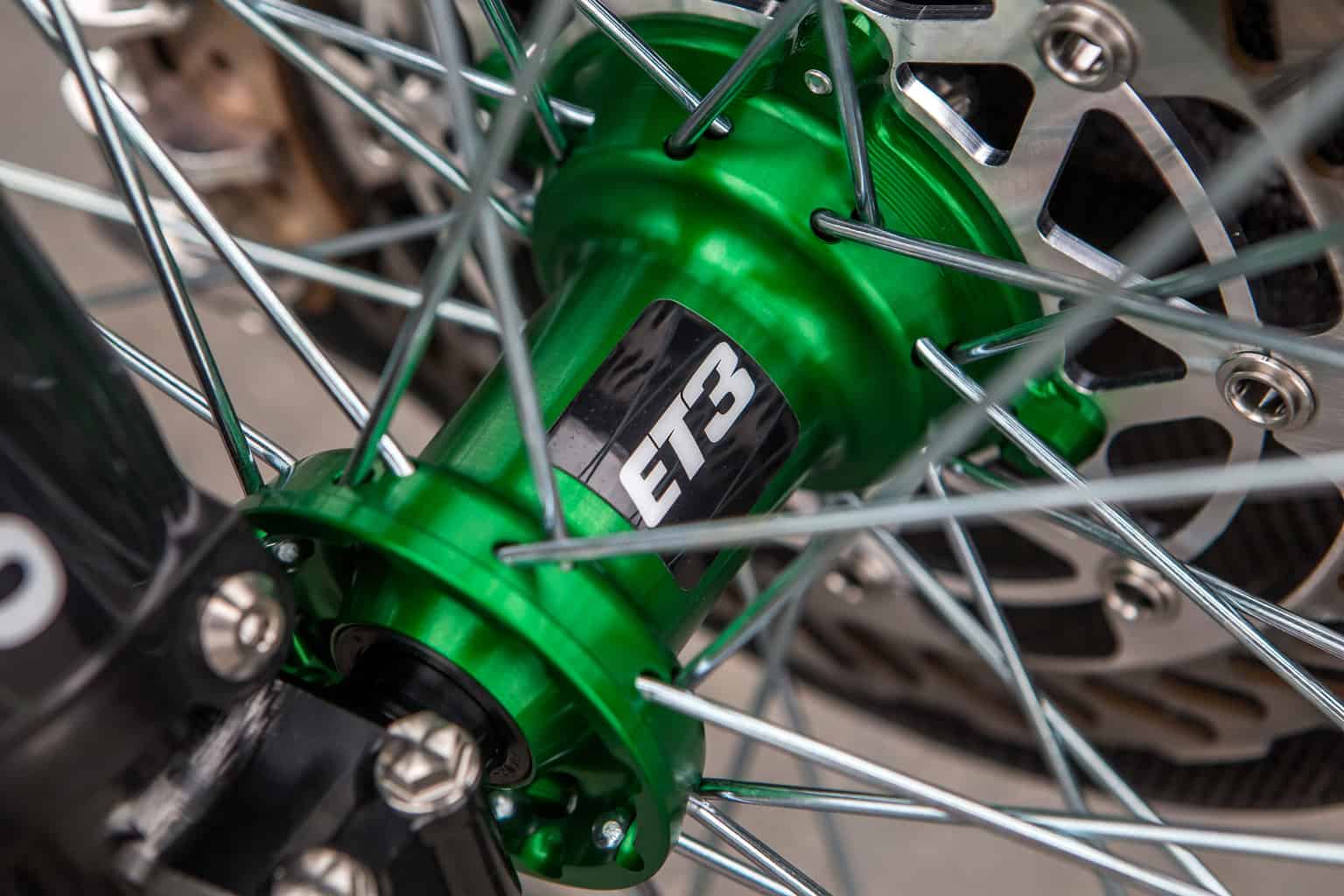 A Factory bike wouldn’t be complete without its rider embossed hubs. The hubs are actually KHI (Kawasaki Heavy Industries) aka Factory part or “Works” part from Japan. 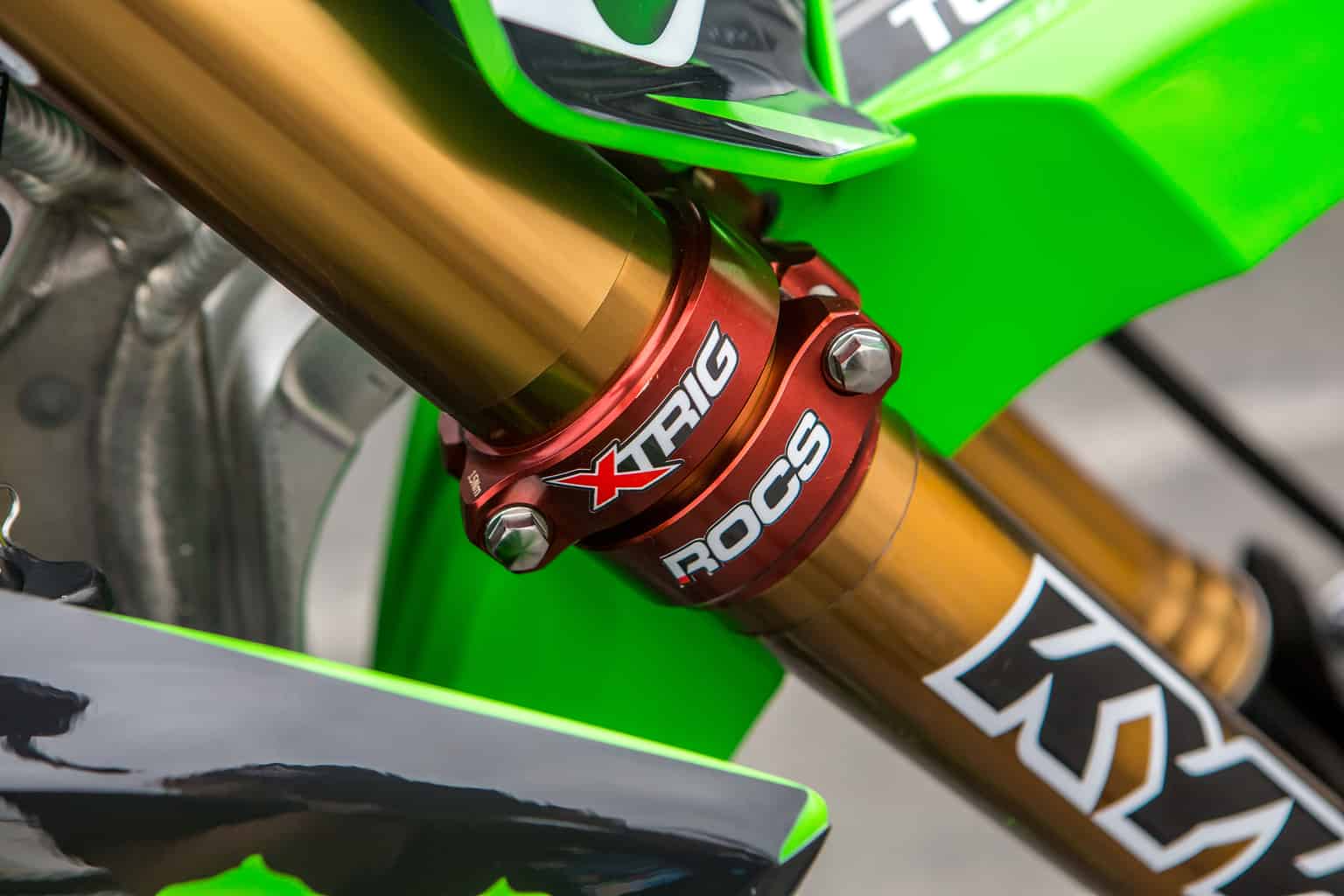 X Trig Triple clamps are mounted to the KYB Spring forks of Eli Tomac’s KX450F. Eli prefers the spring over air that comes stock on the 2018 Kawsakis. 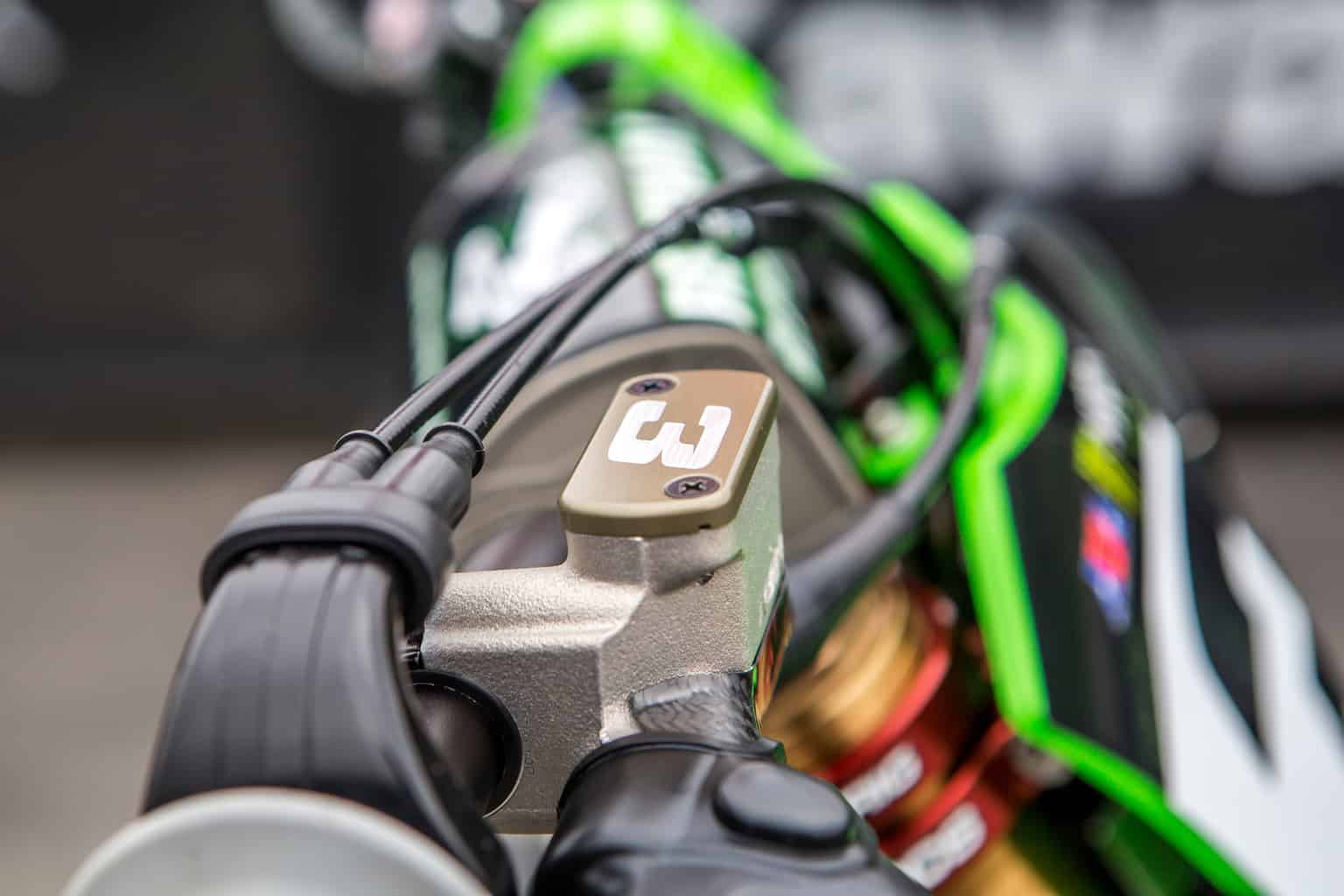 Eli’s bike is littered with etched 3’s to complement that factory look. This year we have noticed multiple teams running protection on both their front & rear brake master cylinders. Teams last year had some problems in outdoors with the master cylinders getting damaged from rocks. To avoid the potential malfunction in braking, teams like Monster Energy Kawasaki have installed carbon guards as a means of protection against flying objects. 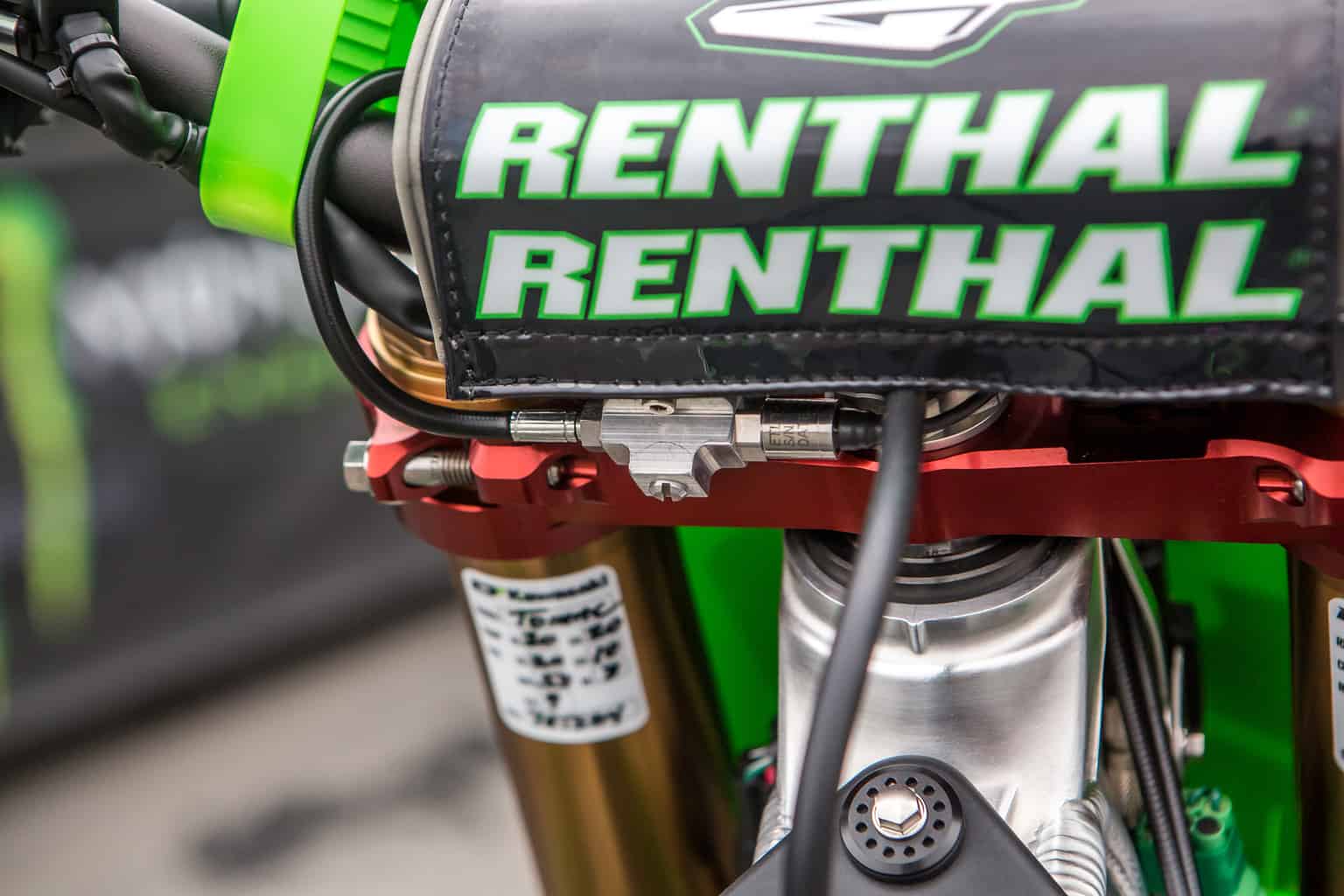 This caught our eye when shooting Eli’s bike. Factory teams are getting further and further in depth with data acquisition. This here will pull data on his forks during use. 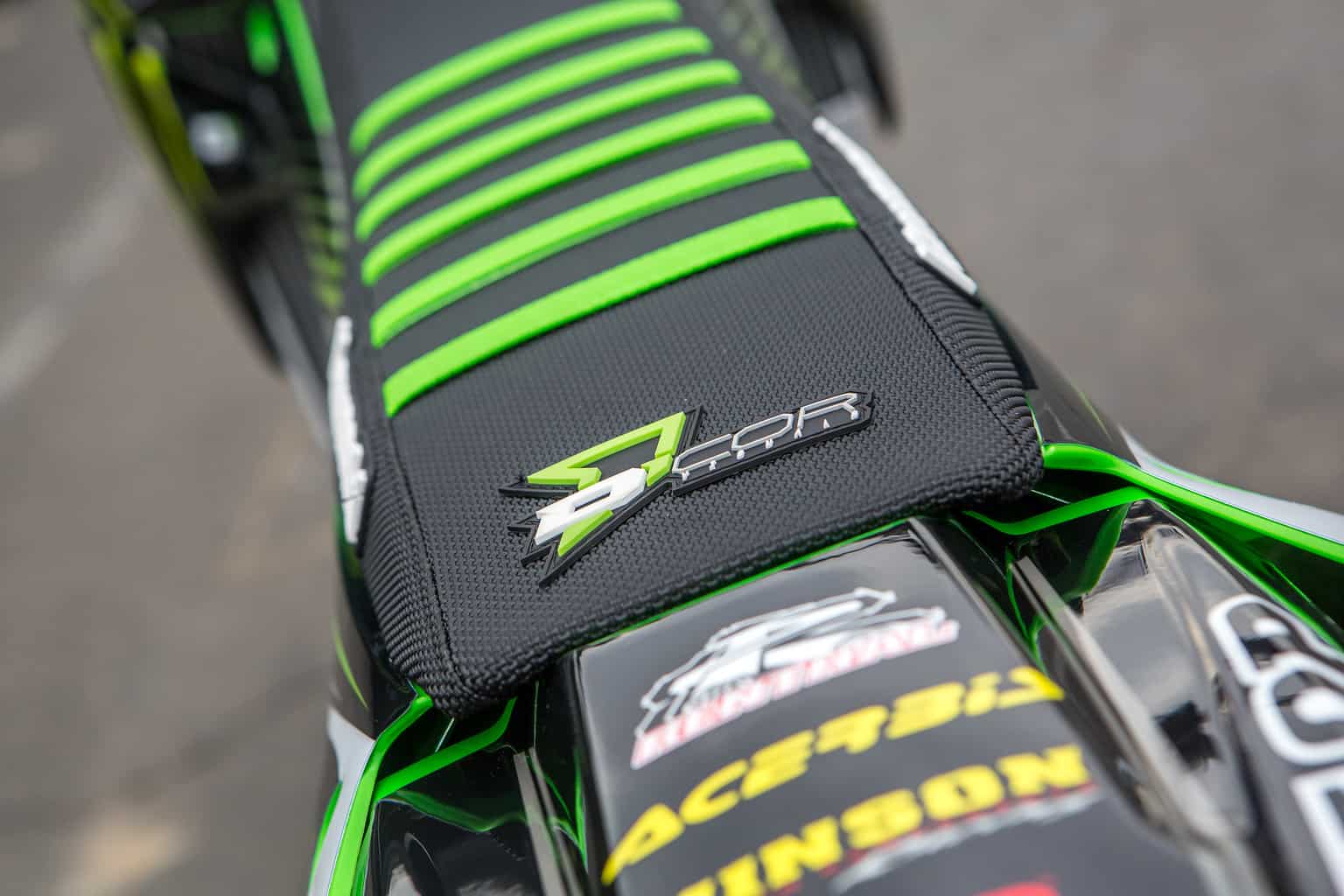 Dcor Visuals handles the graphics as well as seat cover for Monster Energy Kawasaki. The seat looked a tad wider at the rear of the motorcycle. It could be something similar to what Dean Wilson does with his seat. Some riders prefer to have some width at points in the seat for something to lock their legs into while cross obstacles like the whoops. 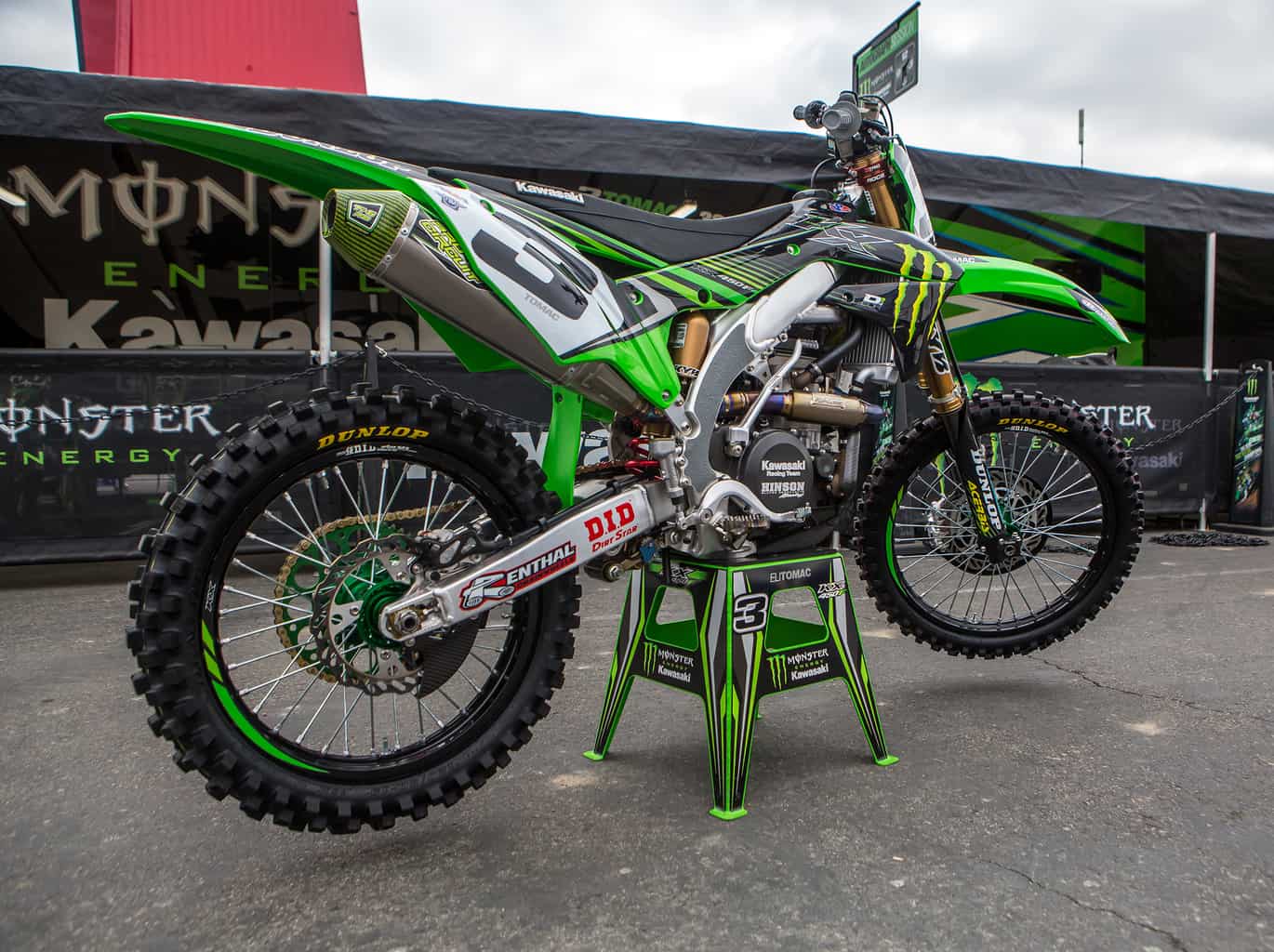 Eli does run grip tape on the frame of the bike but it does not continue over the Acerbis plastics near the air box. Some riders go much heavier on the grip tape. That is all a preference and sometimes plays into their height as well. 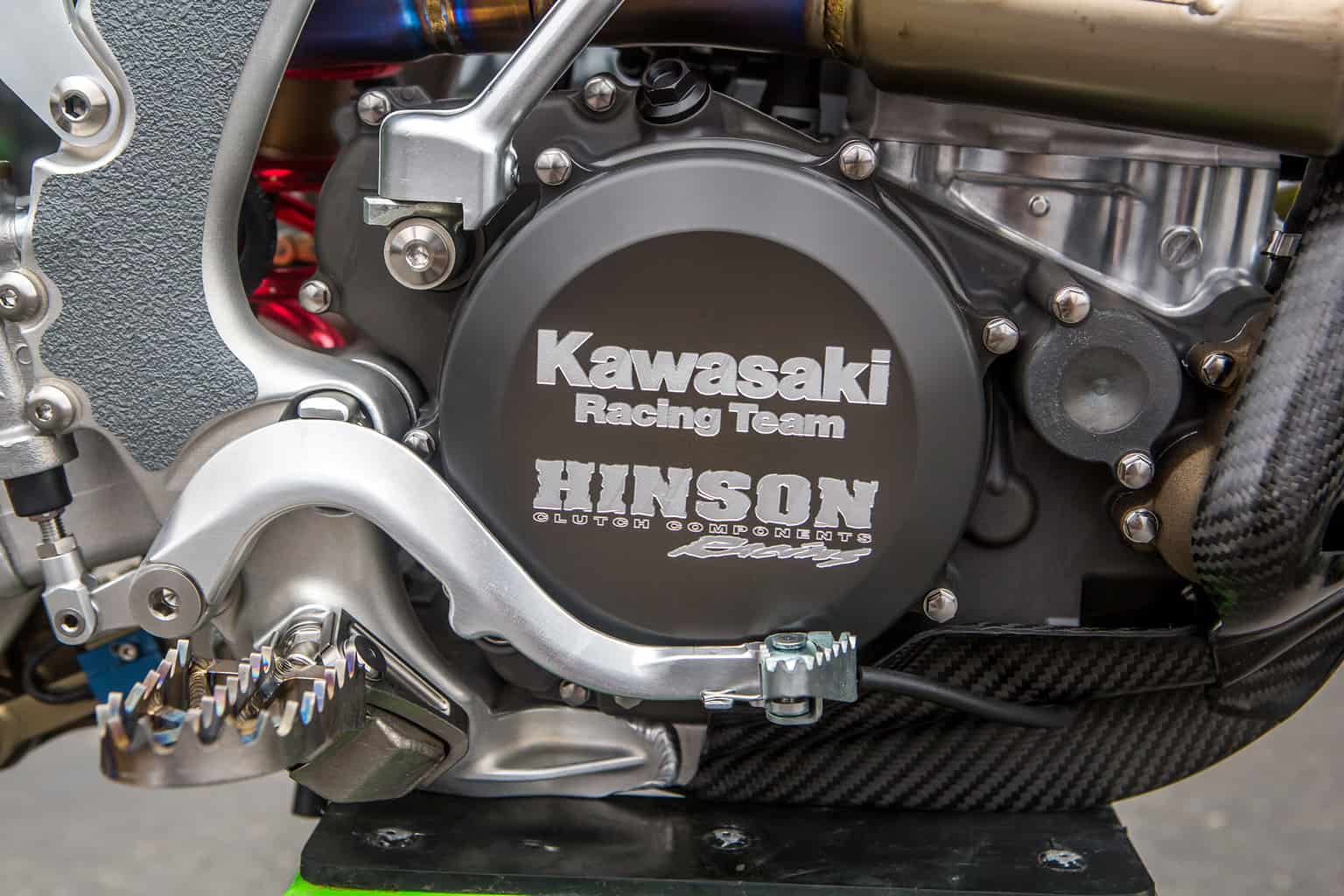 Hinson provides the clutch covers and ignition covers for the race team. The shifter lever and brake pedal are both actually stock components on the motorcycle that come on the 2018 Kawasaki KX450F. 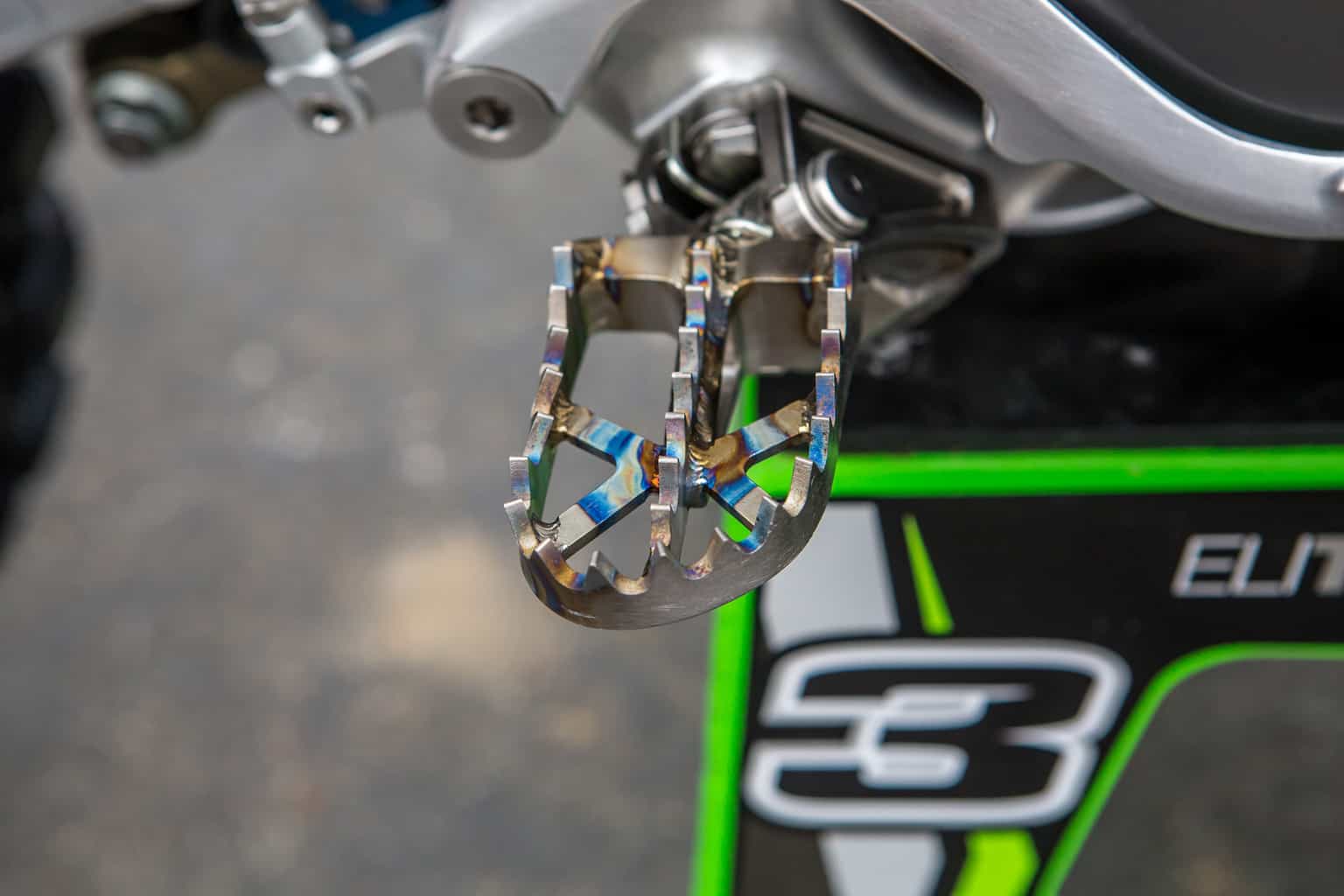 You can never beat a good looking pair of titanium foot pegs. As Brian Kranz described the foot peg area on the motorcycle, a work of art. 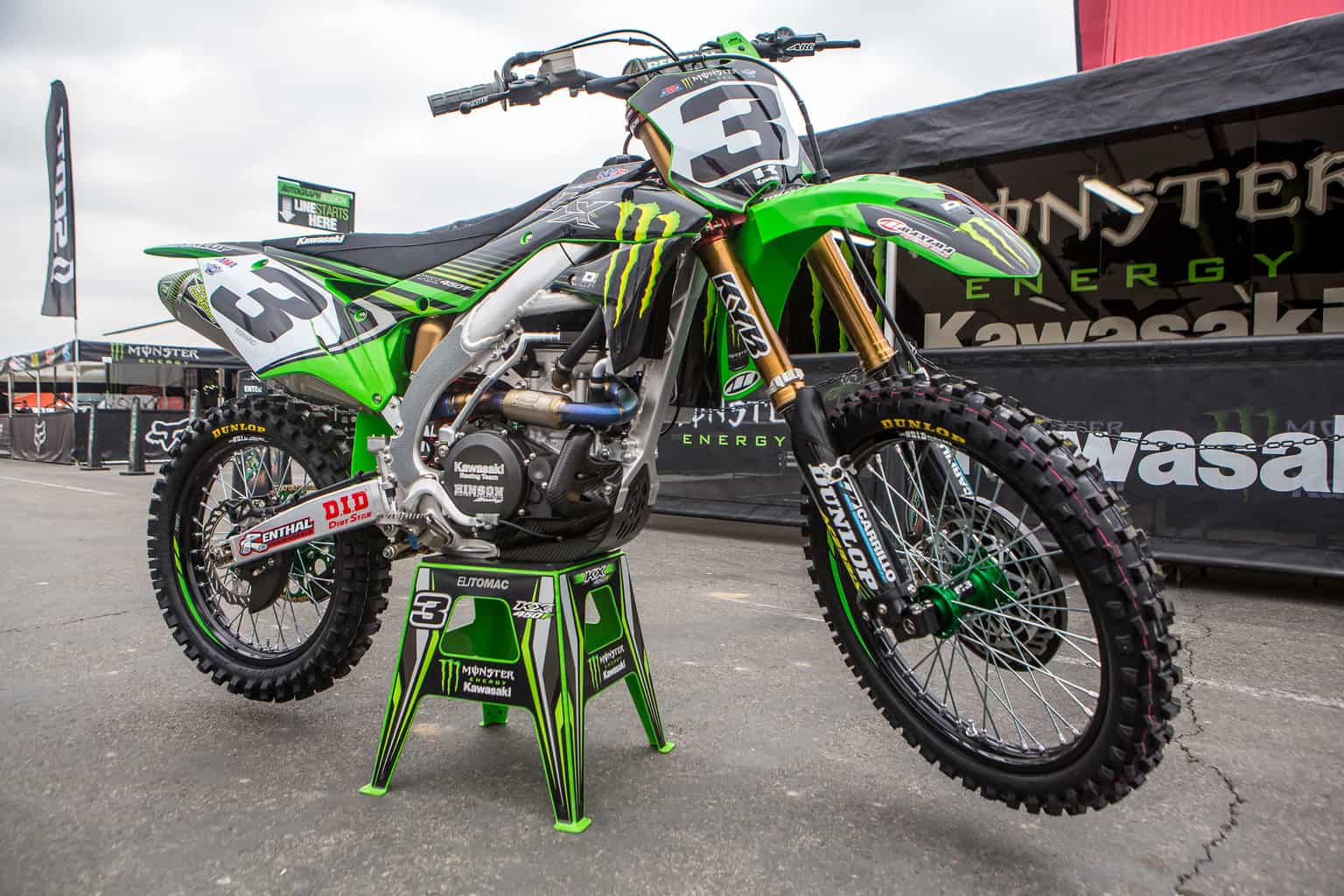 Up top, Eli runs Renthal handlebars and ARC levers. Something to note is that Eli runs a full waffle grip. This isn’t the norm as a lot of the top guys run half waffle grips. Tomac’s bars are very tall and upright compared to other bikes we’ve seen. It looks as though he wants the cock pit of the bike to be a bit larger than maybe how it comes stock. In supercross they can get away with running a stock fuel tank on the bike but when they go outdoors a larger capacity tank will have to be installed to ensure a full moto can be completed. 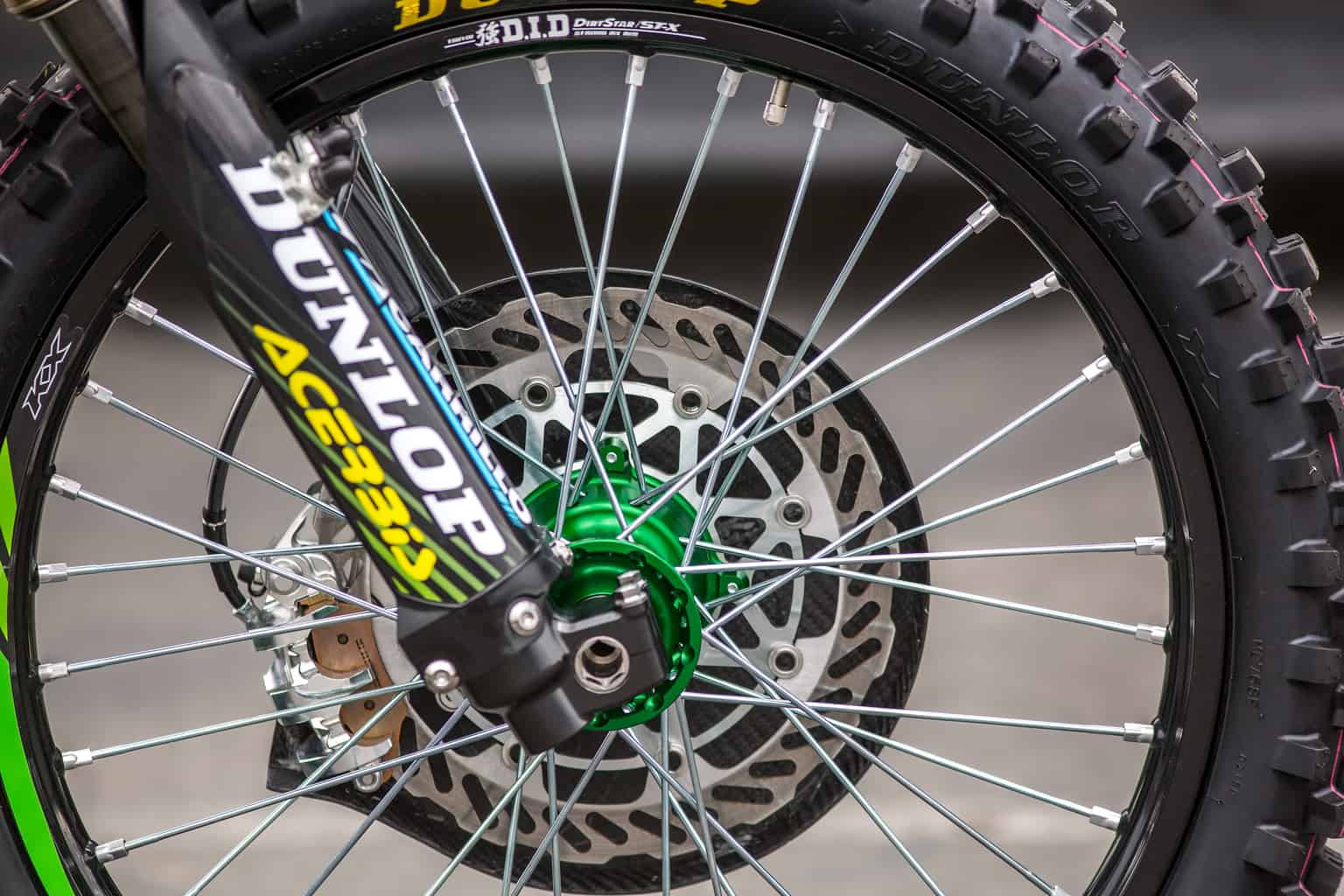 Dunlop tires and DID Dirt Star rims keep the Kawasaki KX450F rolling forward. If you look at Eli’s holeshot device area you will notice two buttons. There are two adjustments on the device itself. They can change how deep they go down on the forks depending on track conditions. 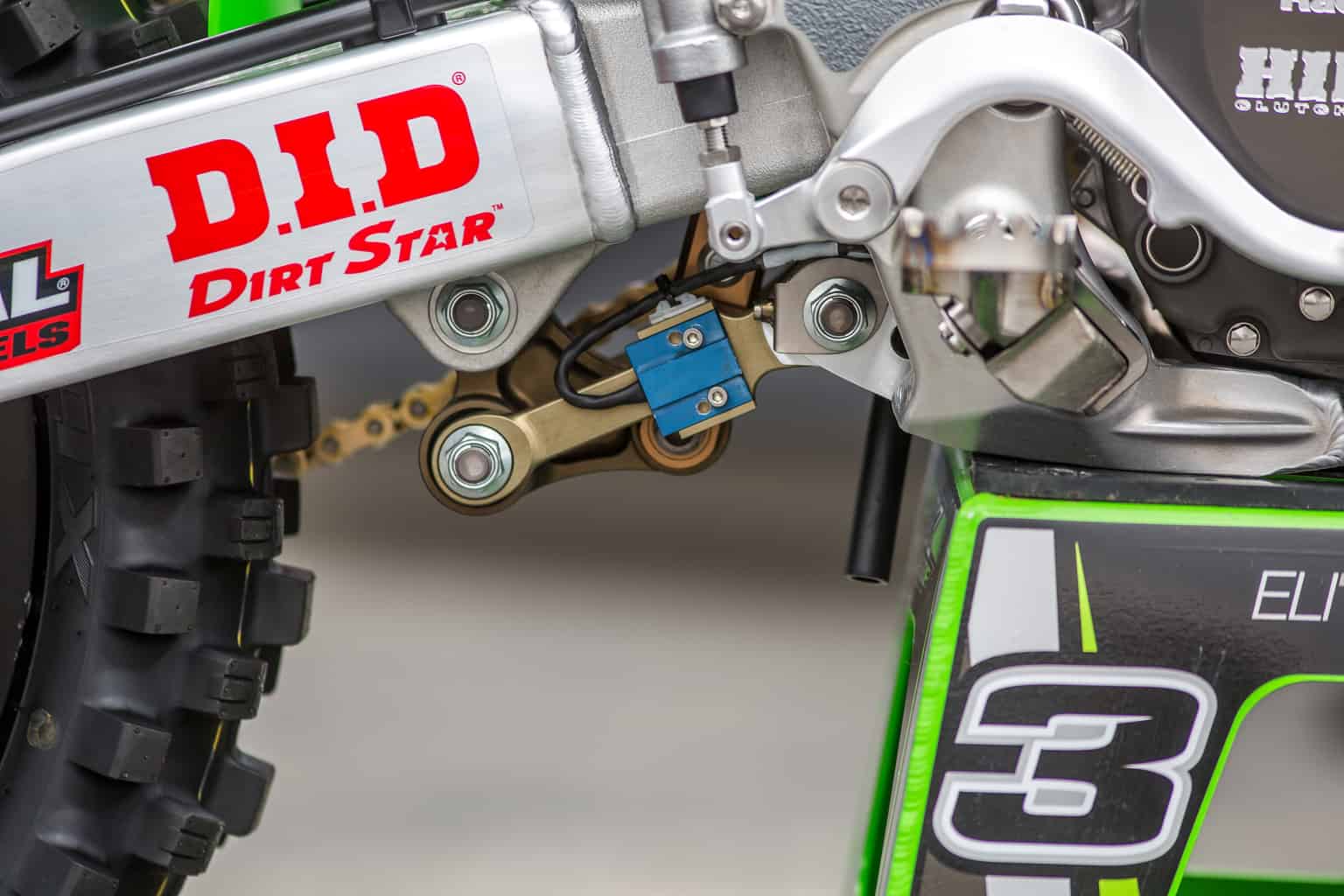 Out back you will notice some more data acquisition components from Monster Energy Kawasaki. The race team gathers all this information and takes it inside the race truck for review. Any small changes they can make to get Eli a little faster on tack  comes down to tools of trade like these sensors. 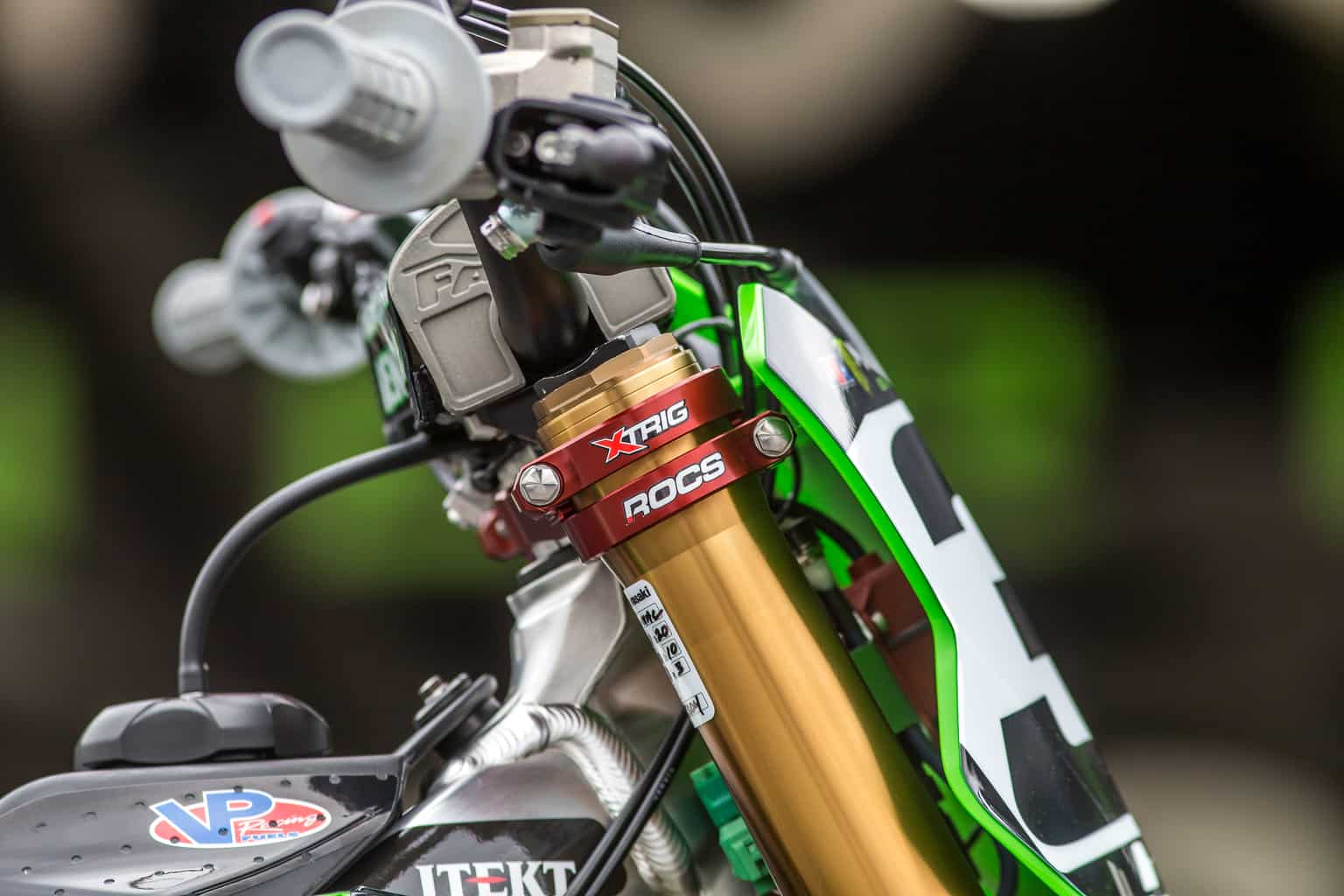 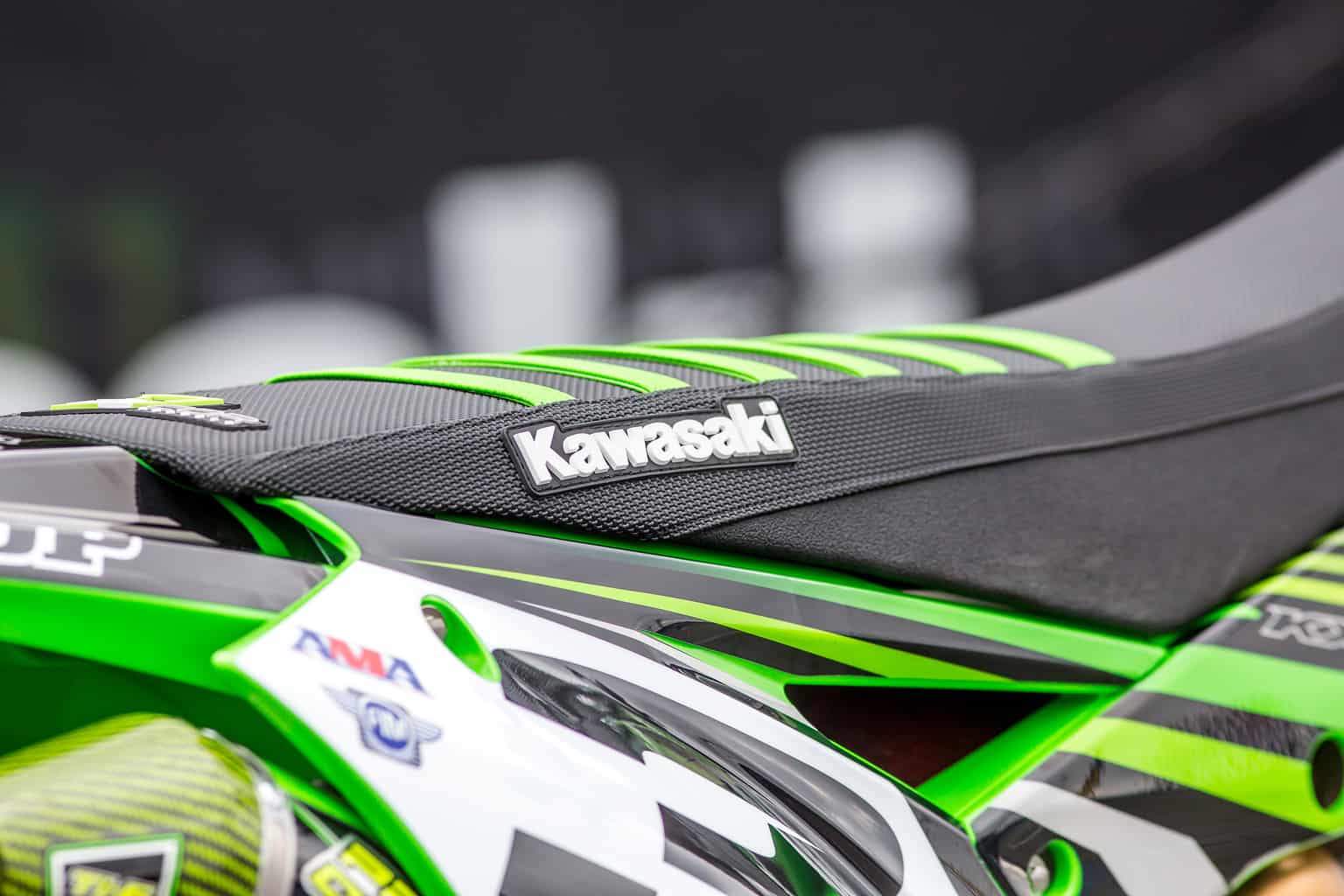 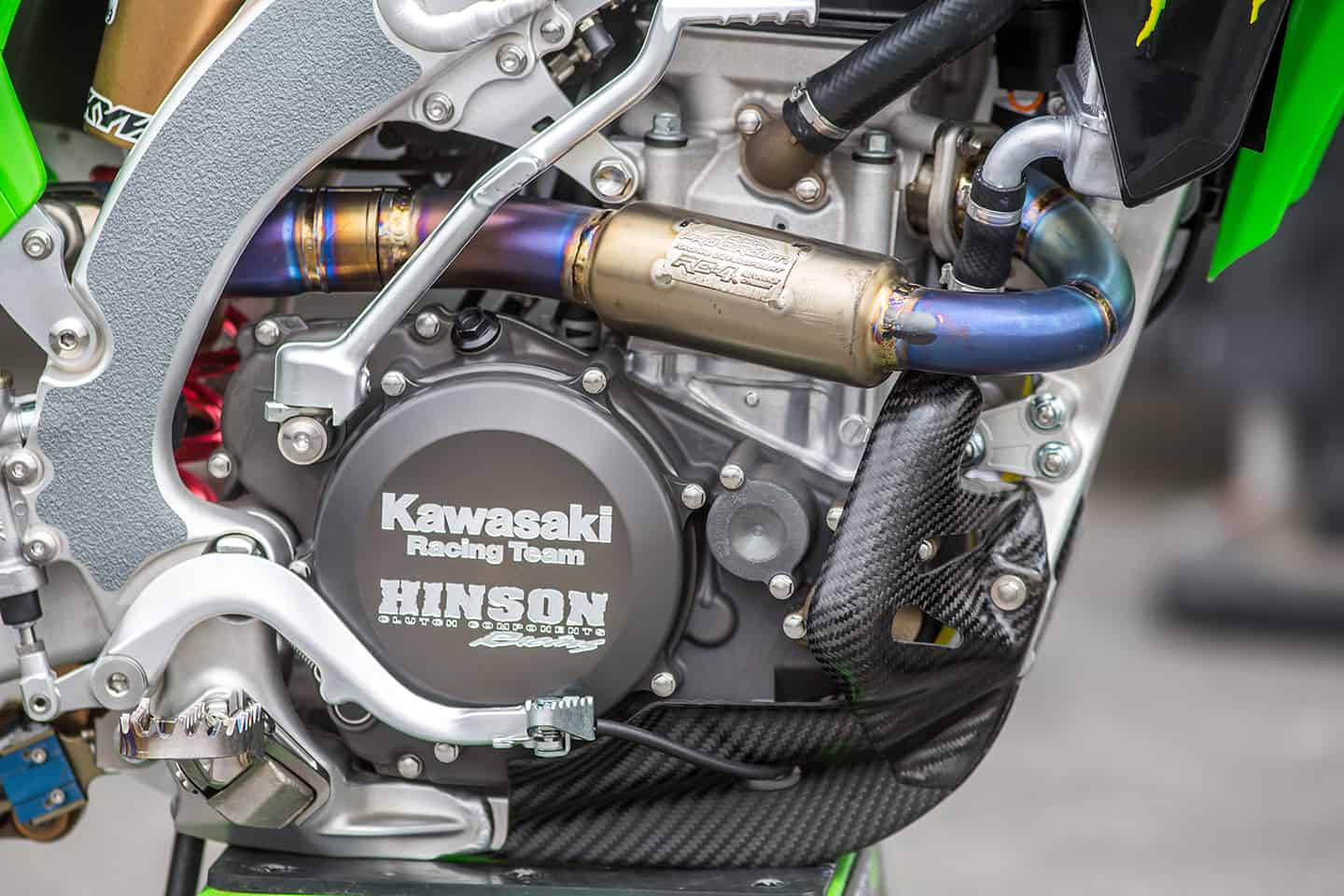 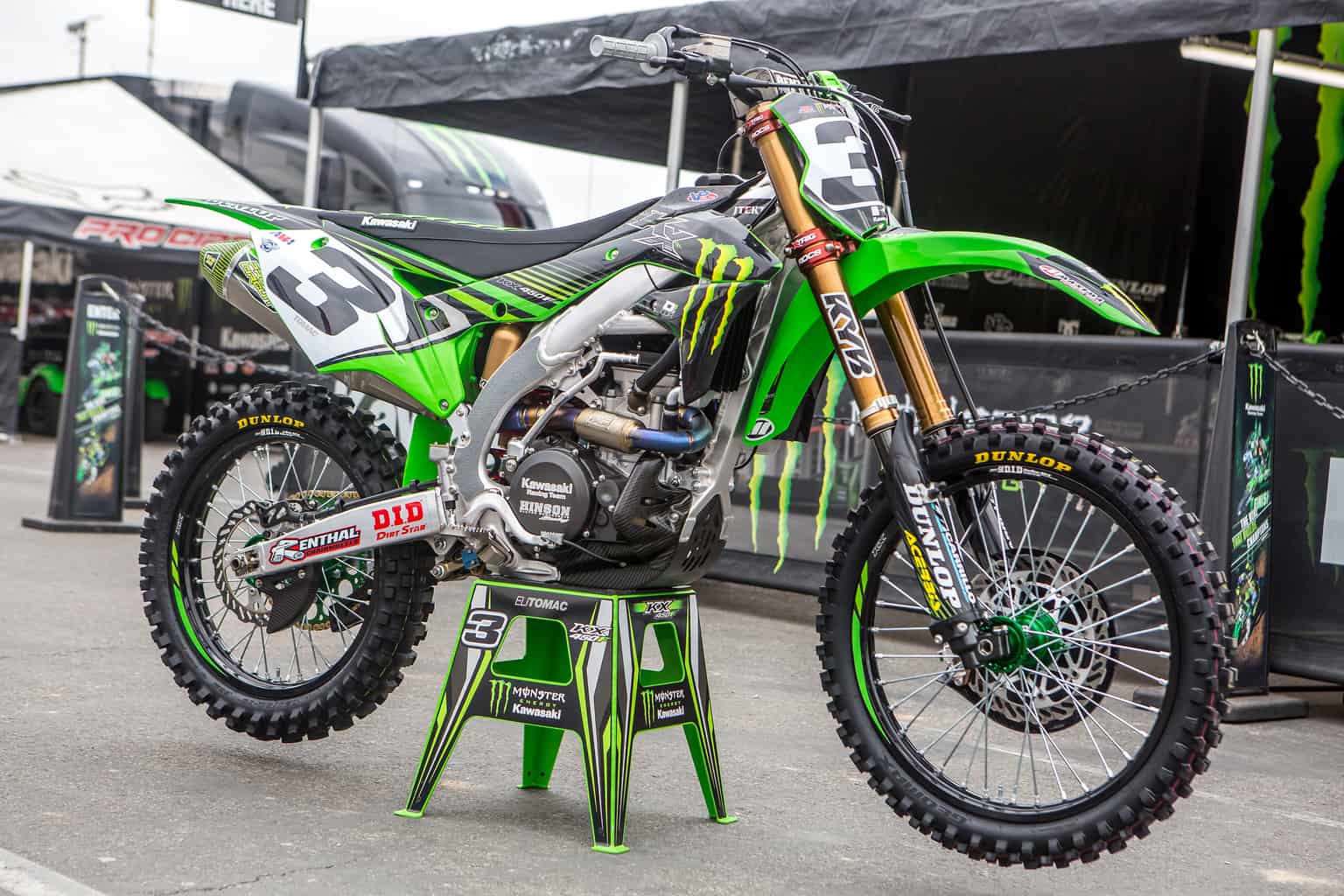 BLAST FROM THE PAST: BOB HANNAH 1978 SUPERCROSS DOMINATOR