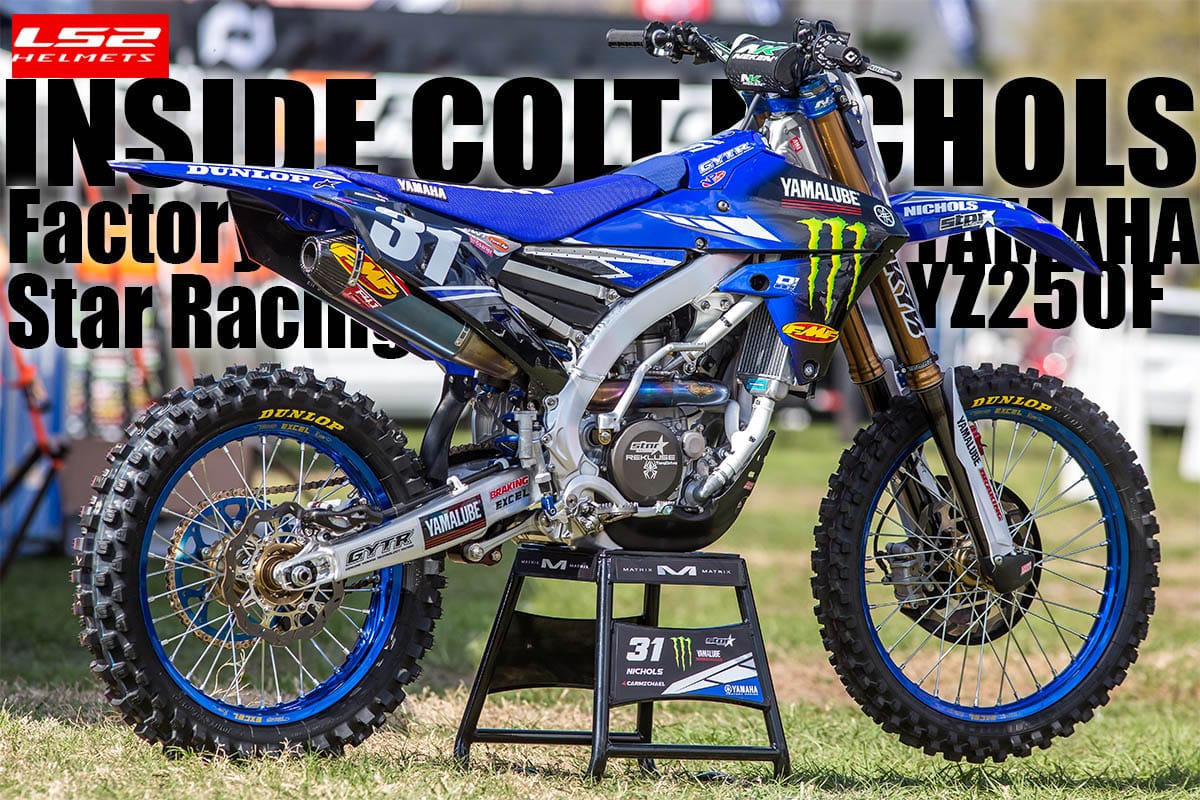 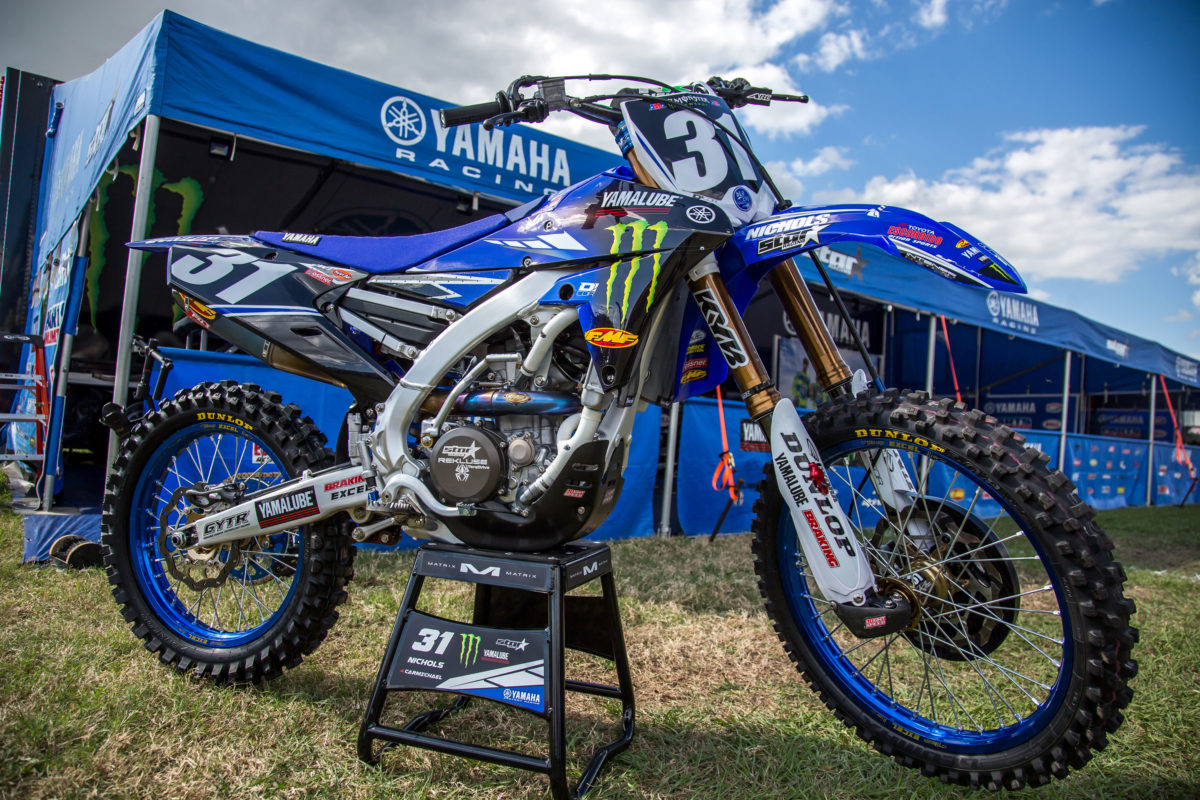 Yamaha hit the east 250 series hard with a podium finish in Dallas last weekend so we decided to catch up with Star Racing Yamaha and mechanic Trevor Carmichael in Tampa to get an inside peak at Colt Nichols Yamaha YZ250F. 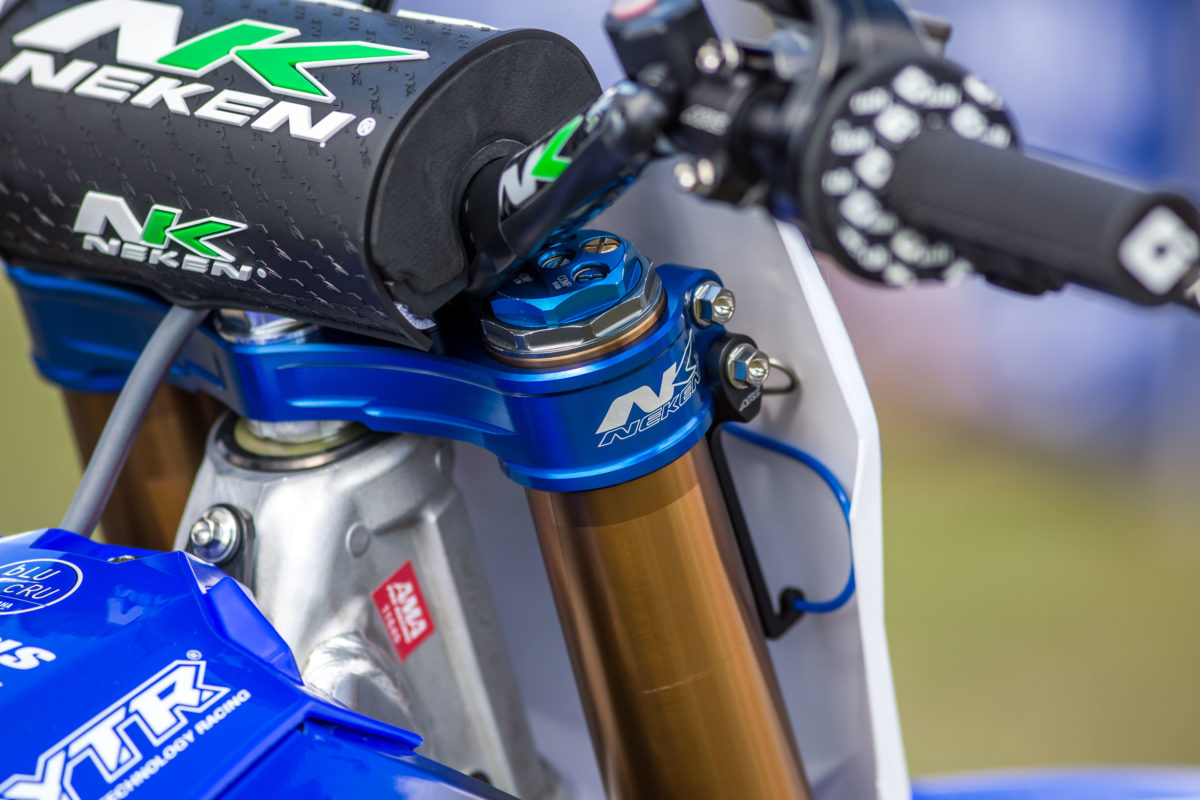 Starting at the front of the motorcyle we noticed the blue Neken triple clamps the entire Star Racing team is running. These are a more traditional solid mounted triple clamp compared to the shock absorption style we have seen on other team bikes. Neken also provides the handlebars to all the Star team bikes which feature a rubberized material coating around them. We moved the handlebars back and forth to see how tight the races were on the steering stem. Colt does like to have his races pretty tight. This is to avoid head shake and keep the bike more stable at high speeds in a straight line. 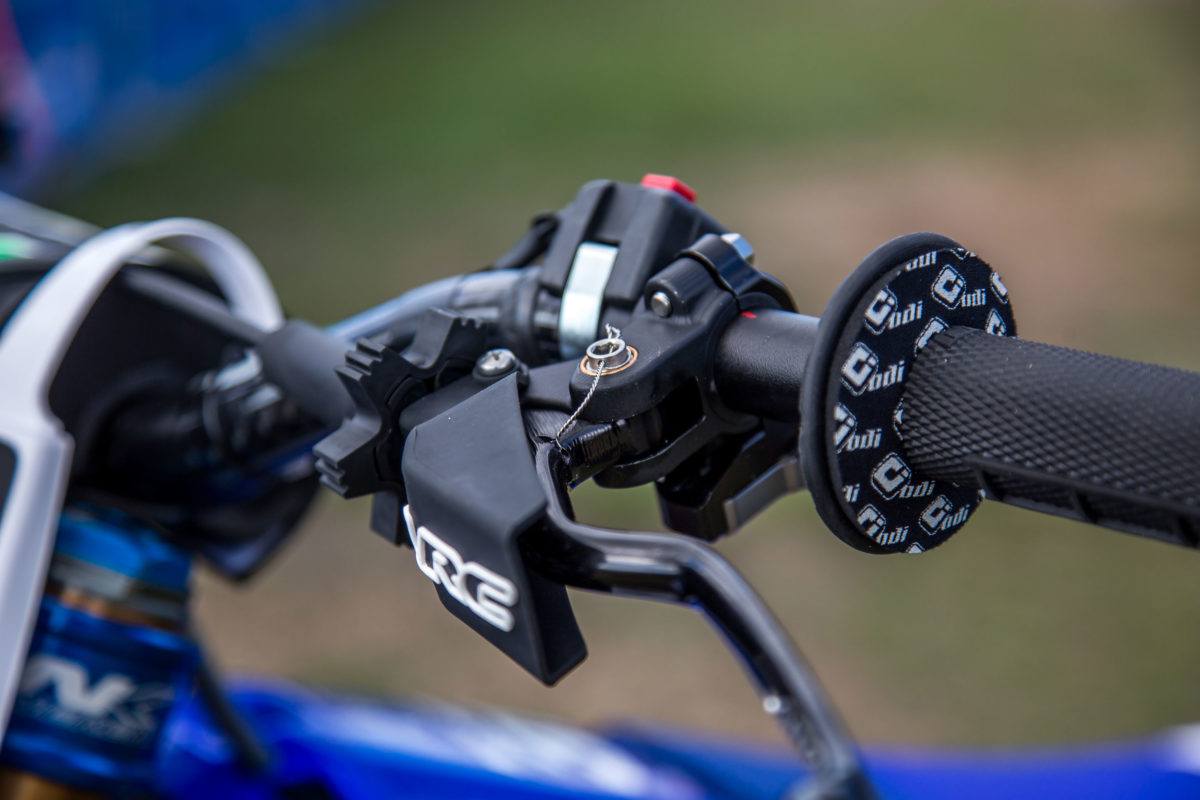 ARC provides both the front brake lever and clutch lever on Colt’s bike. On the clutch side is is a solid clutch lever and positioned fairly far out compared to other riders. Another thing we noticed was the distance between the grip and where the lever mount was. Some riders will move the actual position closer or further away from the grip depending on personal preference of where their fingers come in contact with the lever when pulling it in. 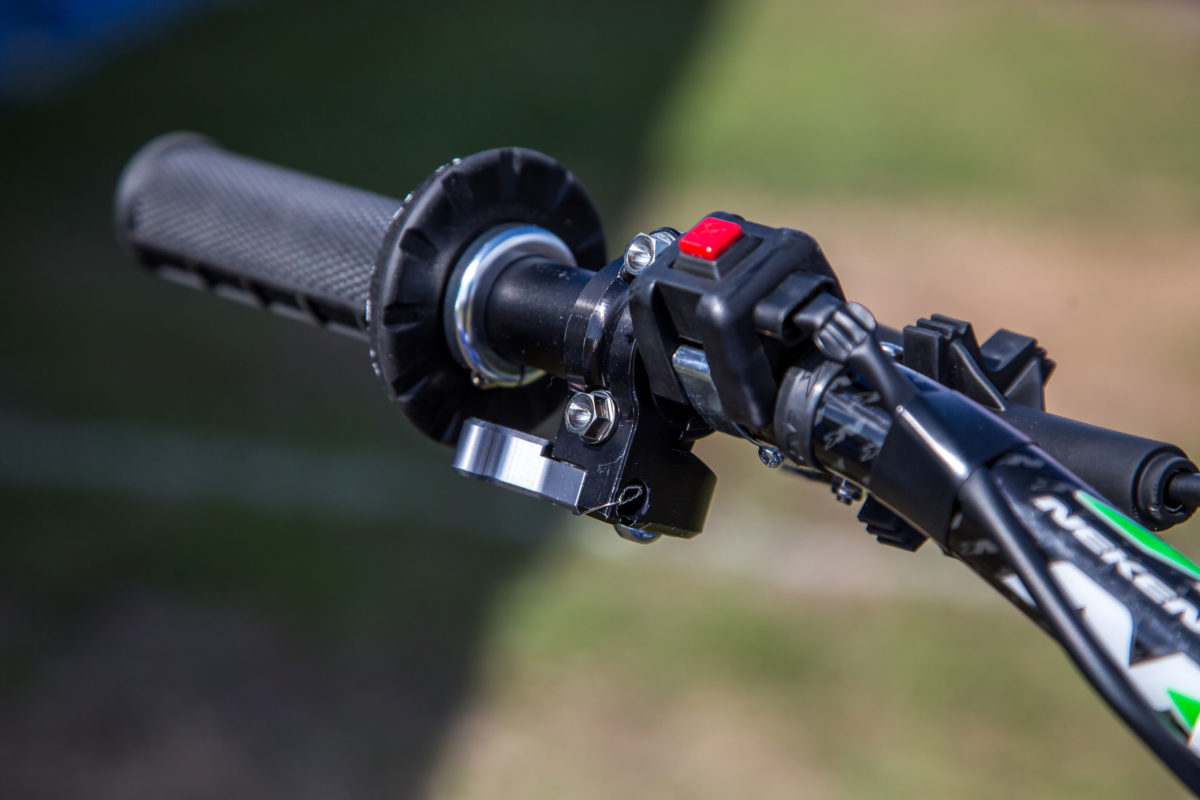 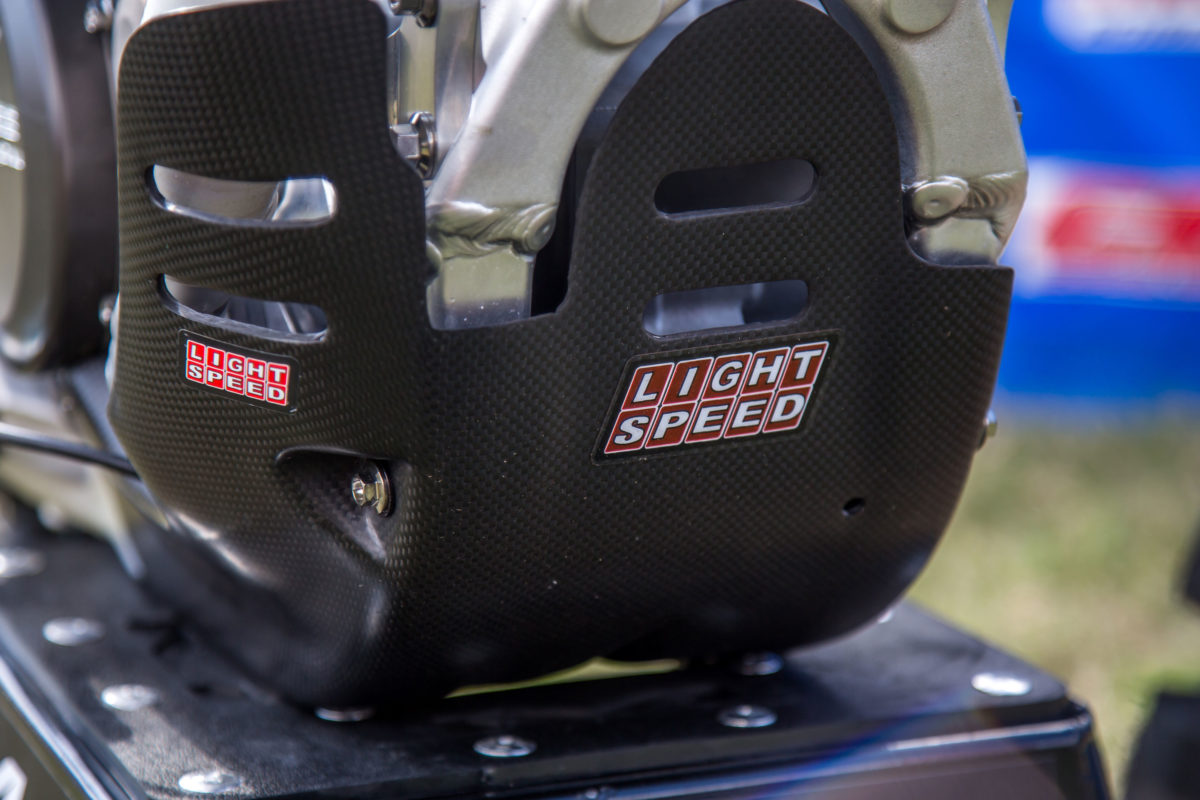 You would normally see a lot of protection on the bikes for outdoors but teams are now doing it more for Supercross. Like this Light Speed skid plate, most of the factory bikes have added protection on the bike to avoid any problems under race conditions. This skid plate will protect against debris and allow the bike to have added protection in the whoops or places where the motor/frame could potentially take a blow. 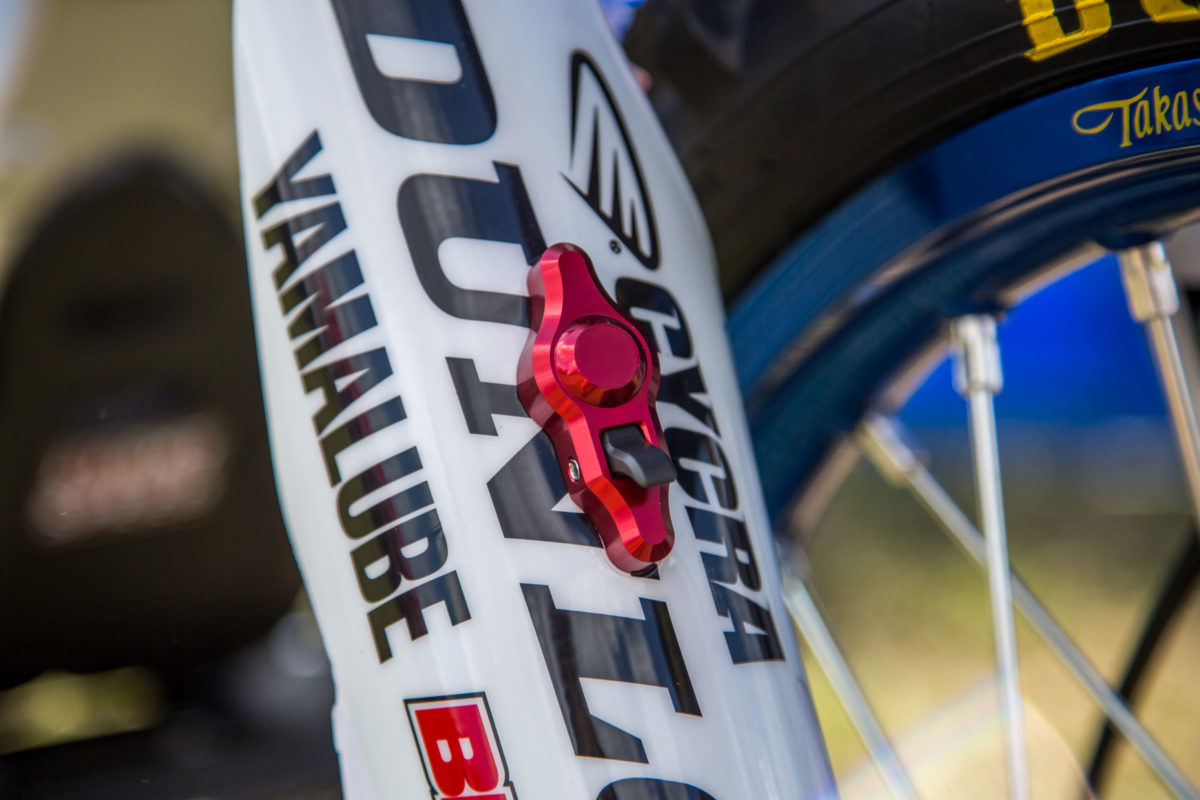 With the new addition to metal gate starts in the 2018 season, Trevor mentioned that the holeshot device position has changed for them. Colt now runs his further down on the fork guard to suck the front end down even more than before. Many of the teams are running two buttons now on the fork guard to adjust for various starting conditions. 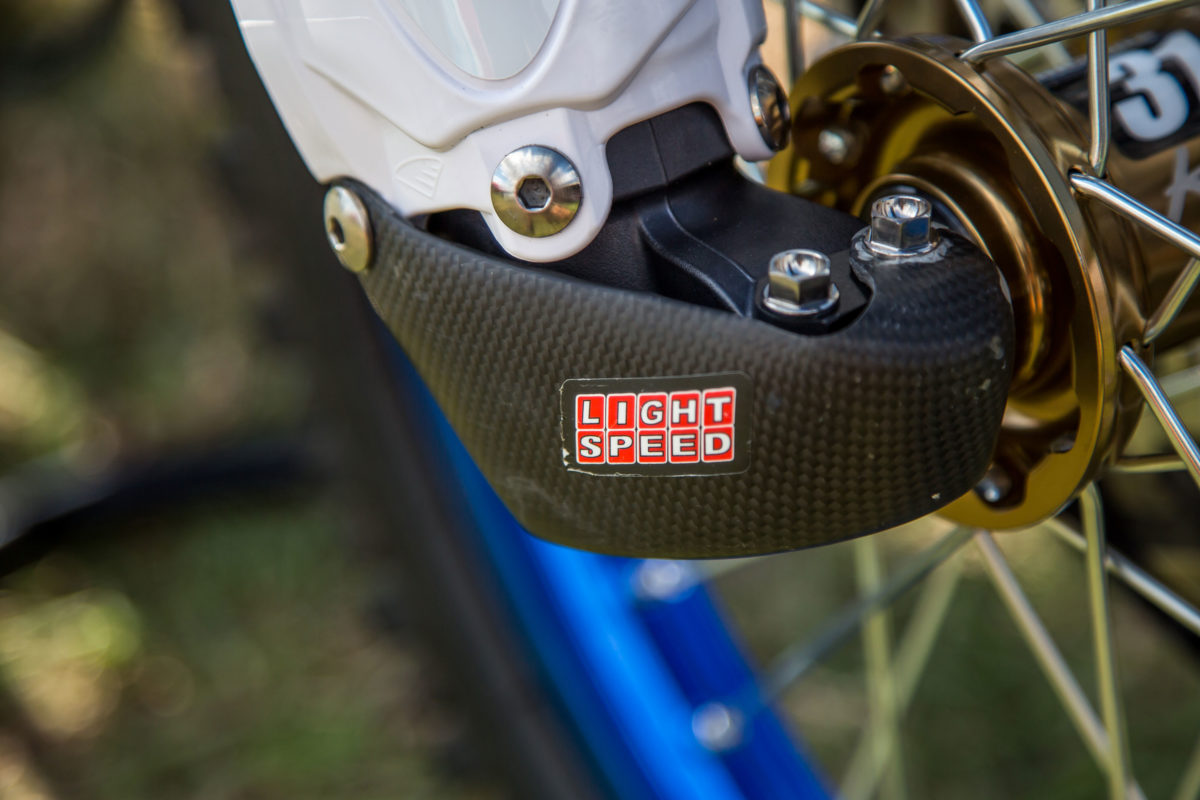 Another Light Speed component, and an interesting one, this lower fork guard not only protects the bottom of the forks but allows the base to be more of a rounded out surface. The rounded out surface keeps from the base of the forks dragging or hooking when the ruts become deep during racing. This guard actually helps from the front wheel getting hung up from the flat edges of the base. 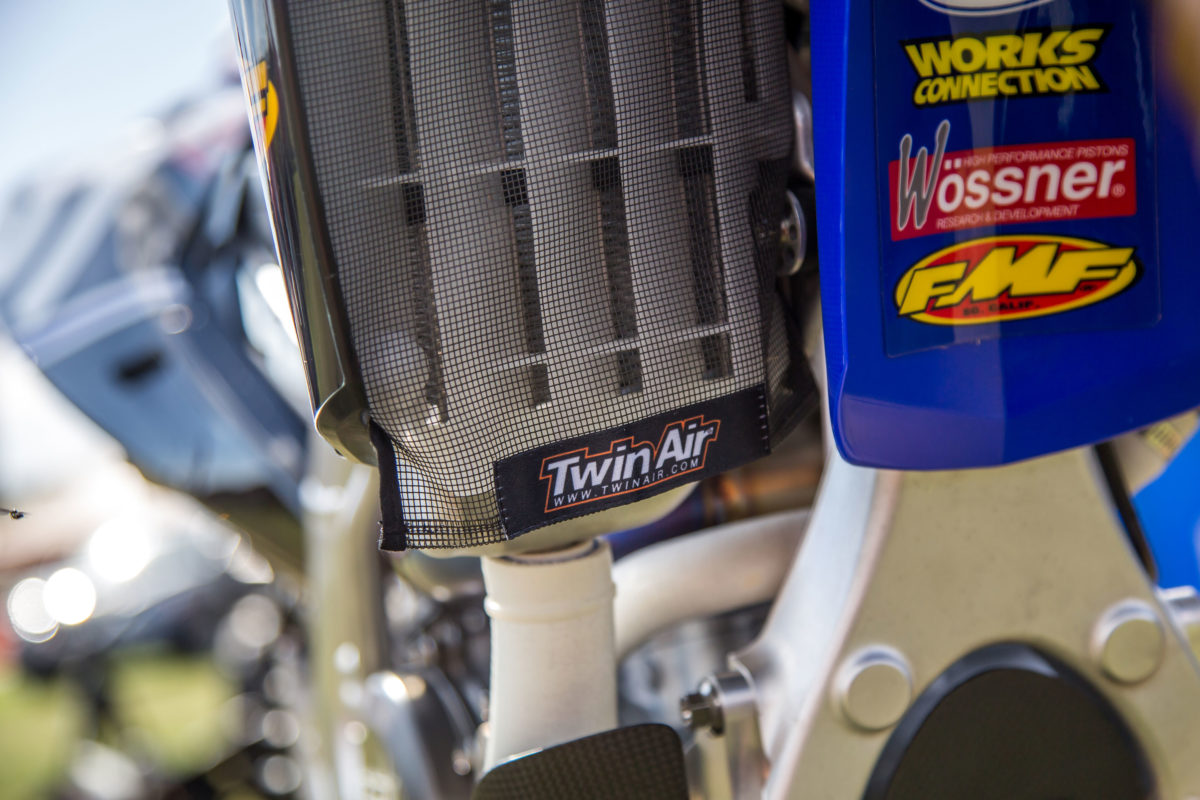 A very familiar protective piece of Colt’s bike is this Twin Air radiator screen. These help keep the radiators from getting hammered by sand or rocks during the race. Mechanics can remove the screen and save time from having to clean or fix the radiators from debris. 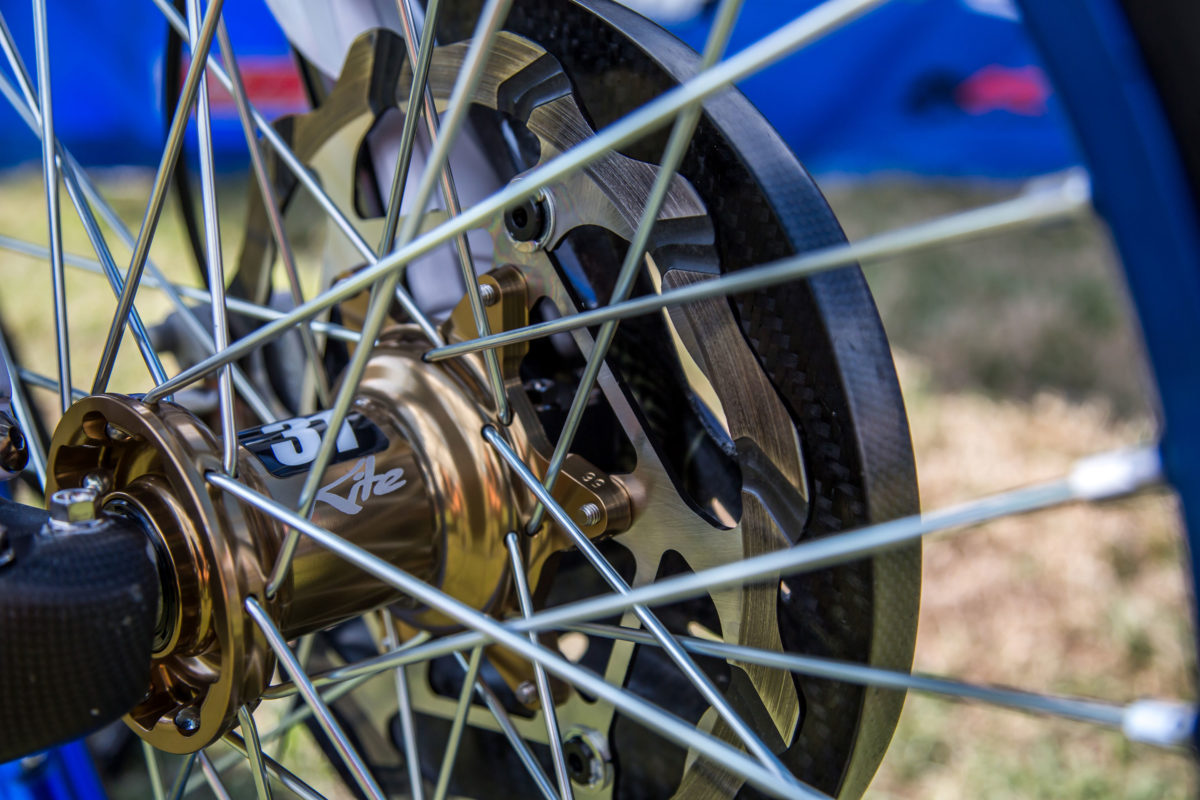 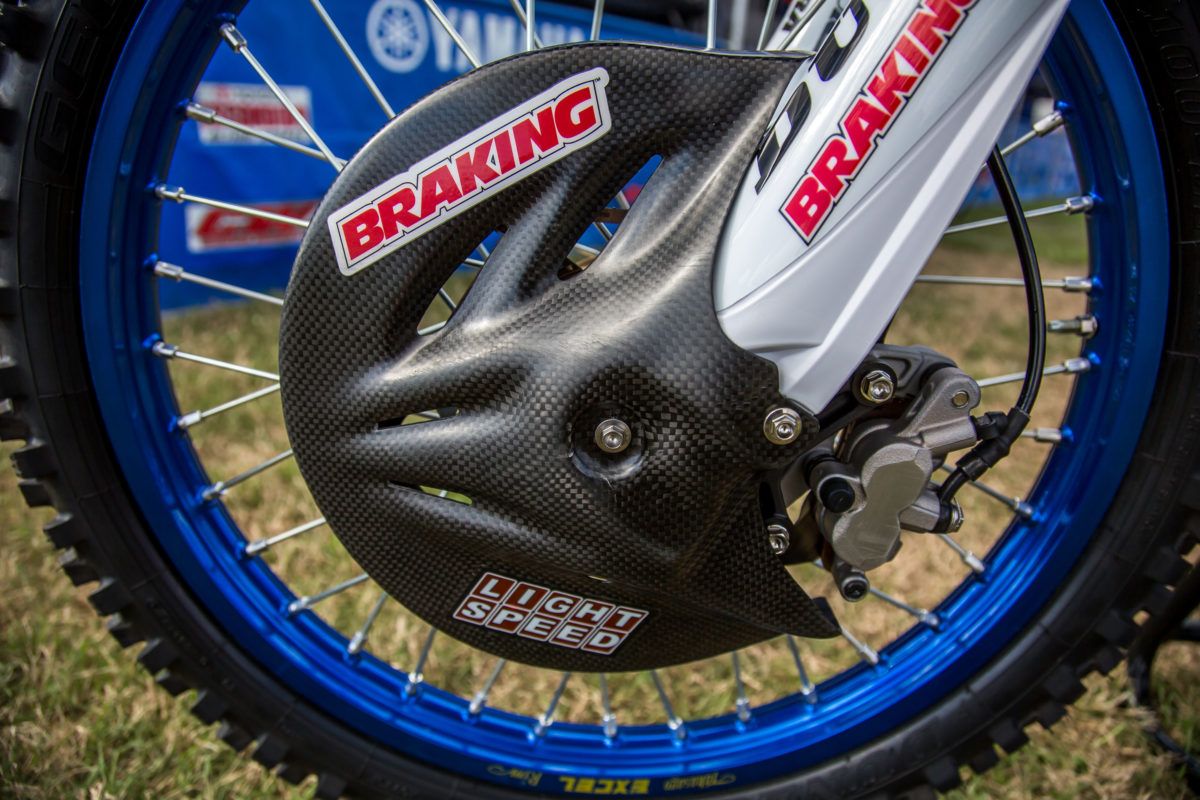 The flip side to the rotor and component that protects it from damage is this Light Speed carbon disc guard. The brake lines, caliper and master cylinder are all stock. 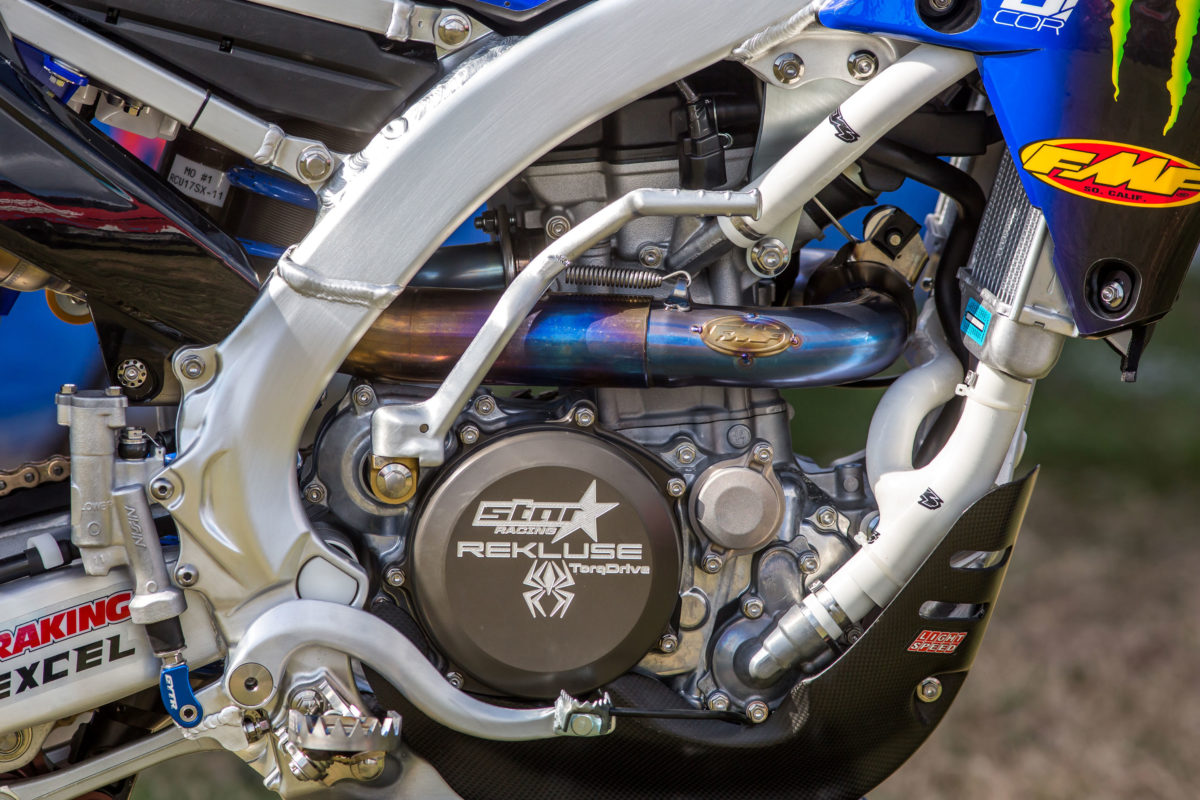 The motors are done in house at Star Racing. Star will develop an engine package they all agree on and usually stays that way with subtle changes for rider preference. The more is built to have a lot of bottom but that doesn’t mean that mid to top lack at all. Trevor explained that this bike’s top end power was no slouch and there is ton available for high speed situations. Vortex supplies the igntions and ECU for the bike. They will make changes to the mapping for particular track or temperature changes as far as weather is concerned. The Star Racing team runs Wasner pistons and Crank Works crank. We thought the white CV4 hoses were a nice touch to the color scheme this year in 2018. 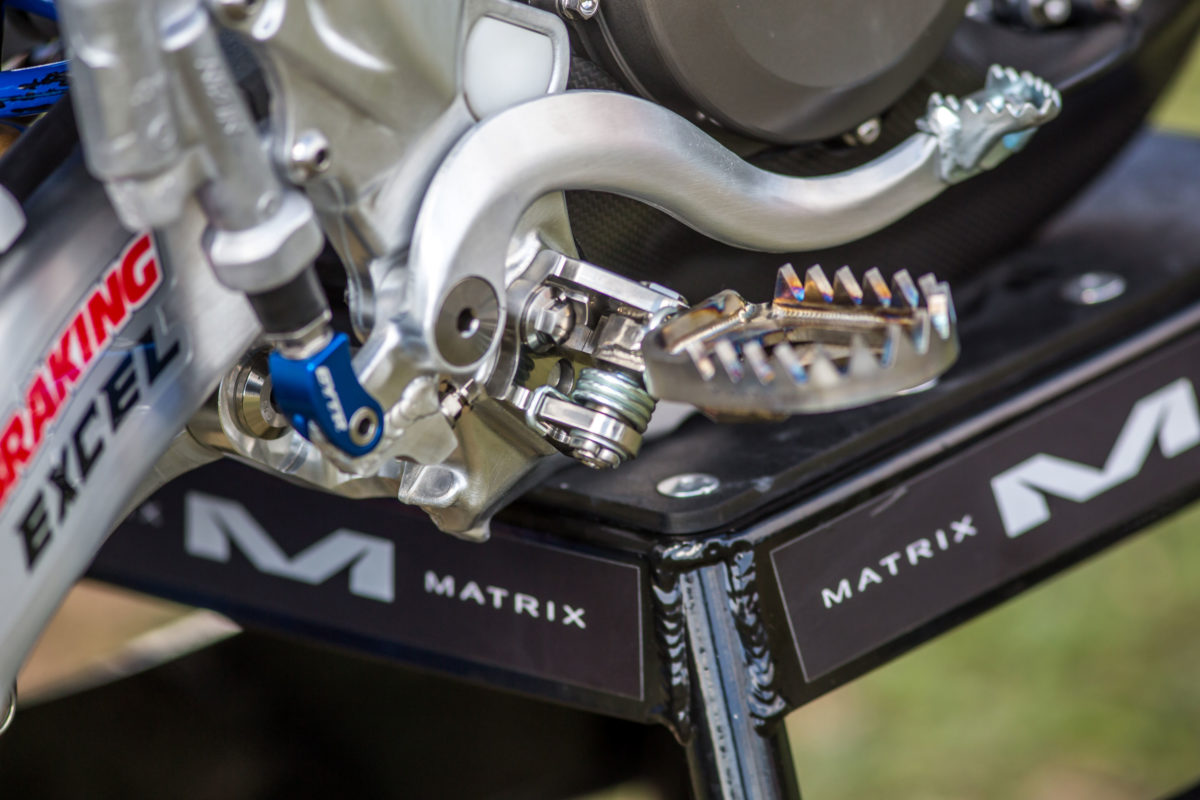 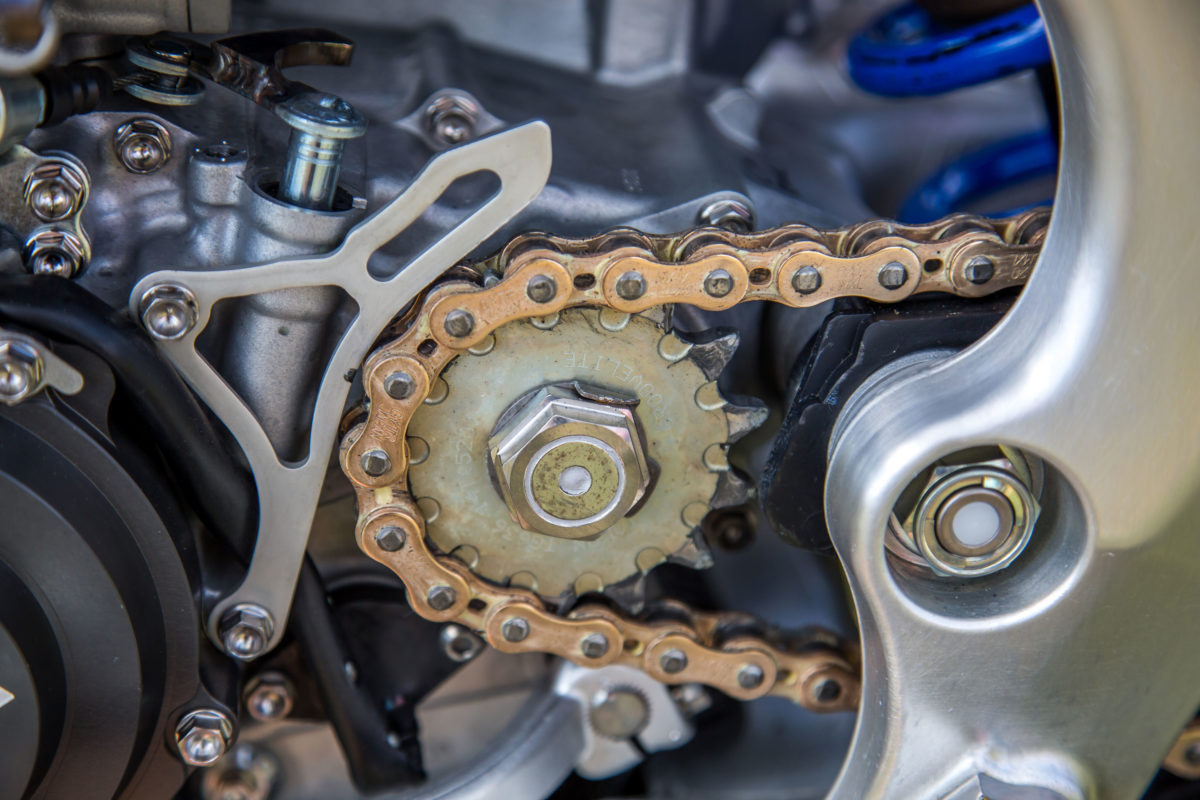 GYTR parts are littered all over the bike including this counter shaft sprocket pictured here. 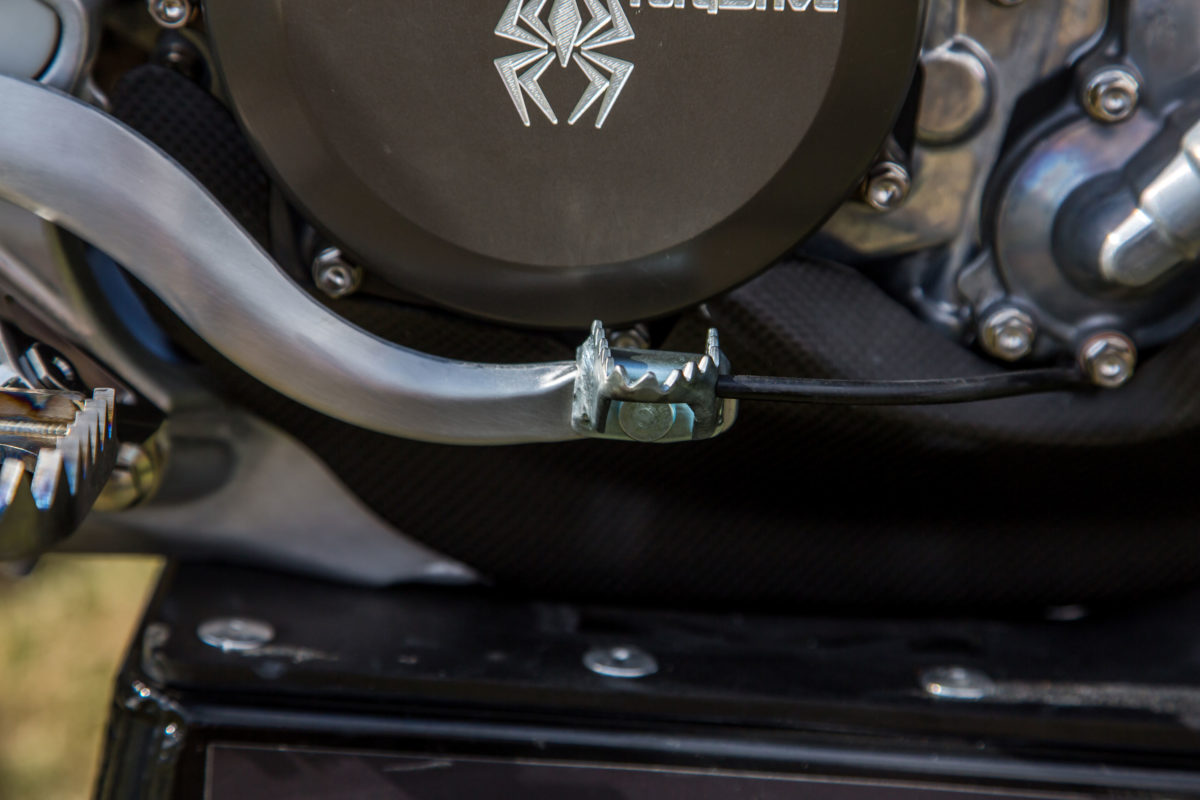 Surprisingly enough, the brake pedal and shifter are both stock on Colt’s bike. 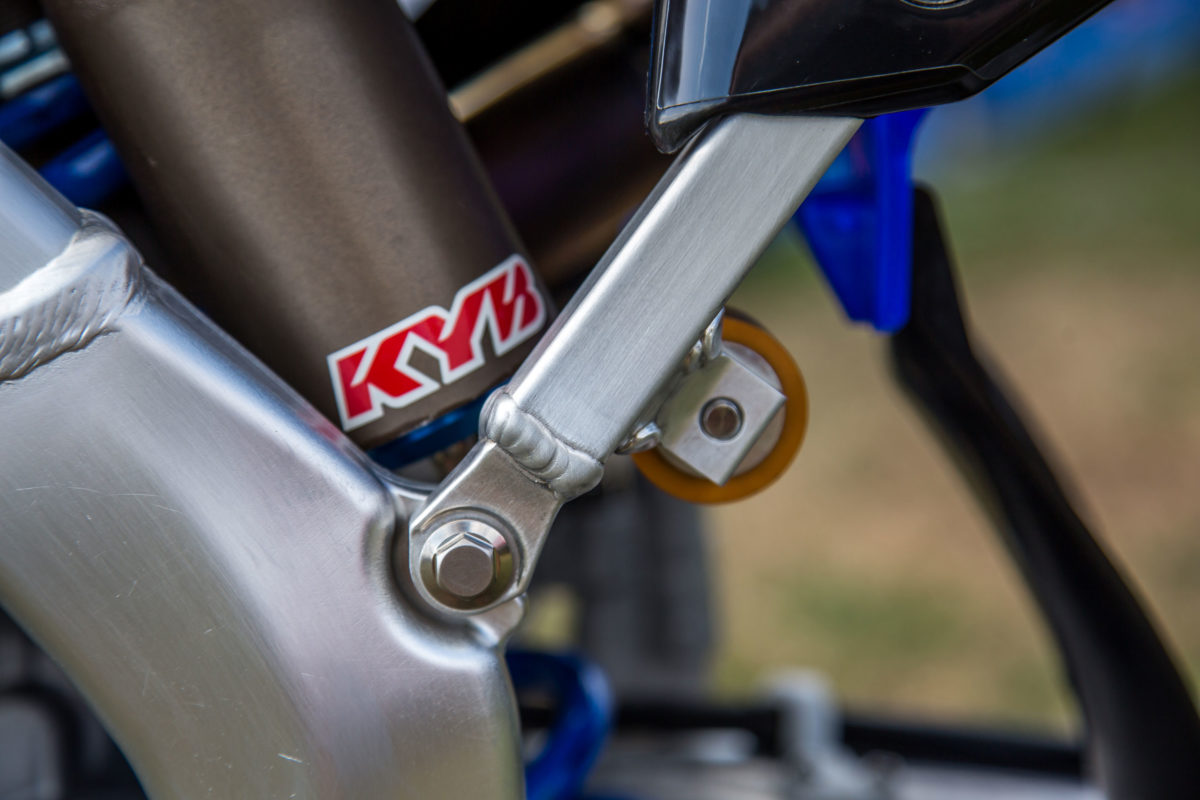 The sub frames are also another stock part for the Star team. Something they do different is actually cut is down to lower the rear of the bike to the rider’s preference. This can help in the whoops to save from the rider getting hit in the butt by the seat and not having enough room when in race position. 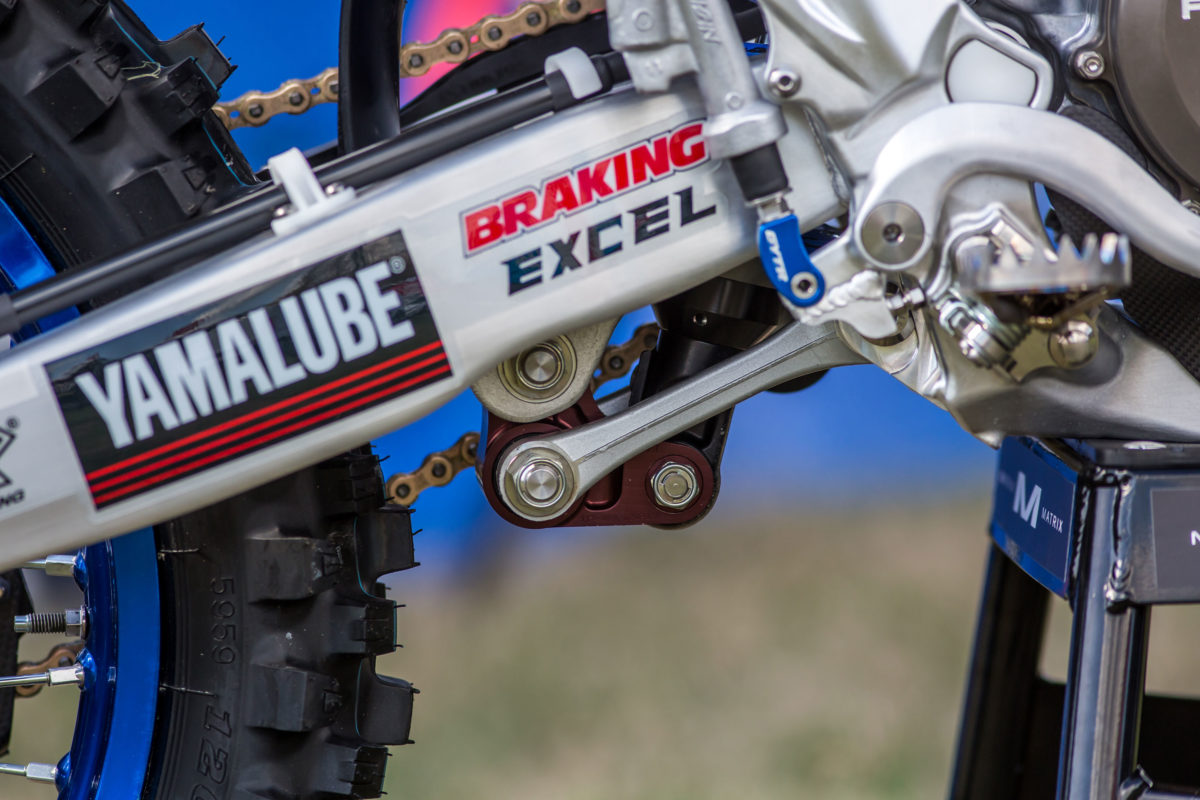 A factory part that is supplied by Yamaha is the rocker arm for the KYB shock. 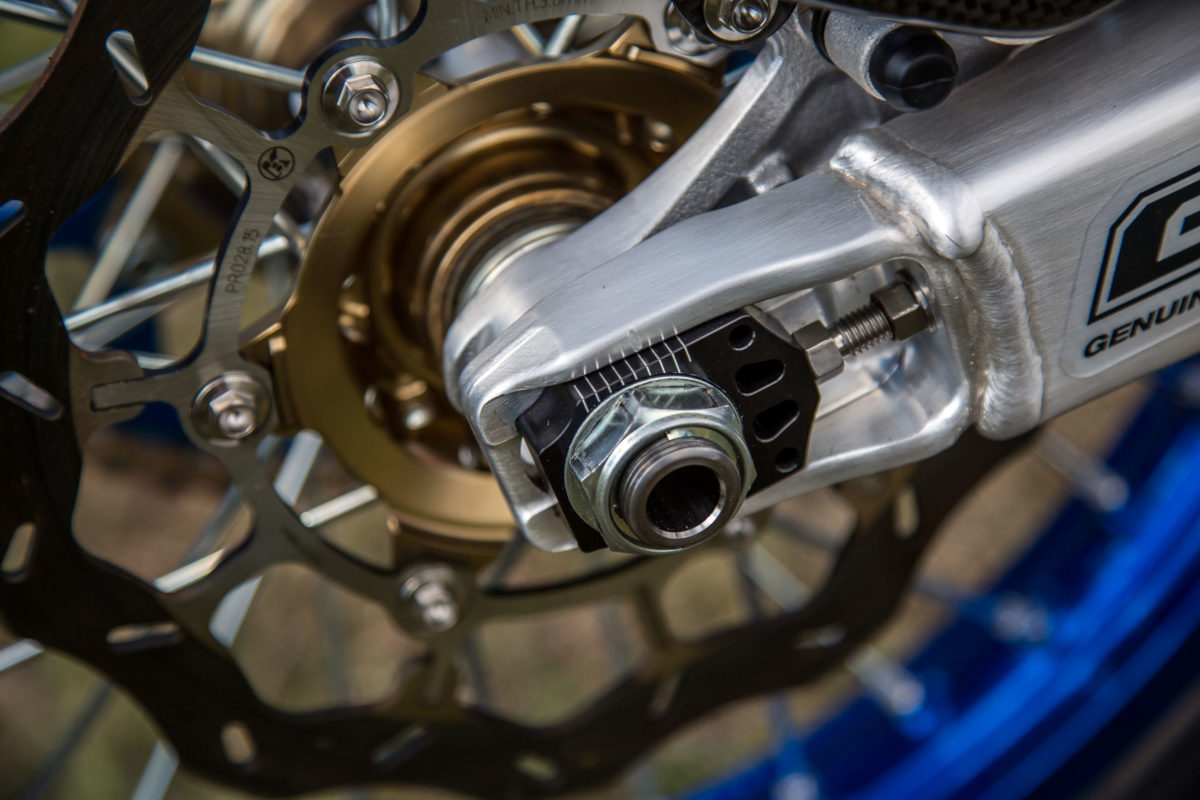 On the rear of the bike a titanium axel is used with Works Connection axel blocks. All the titanium on the bike is supplied by Met Tech. 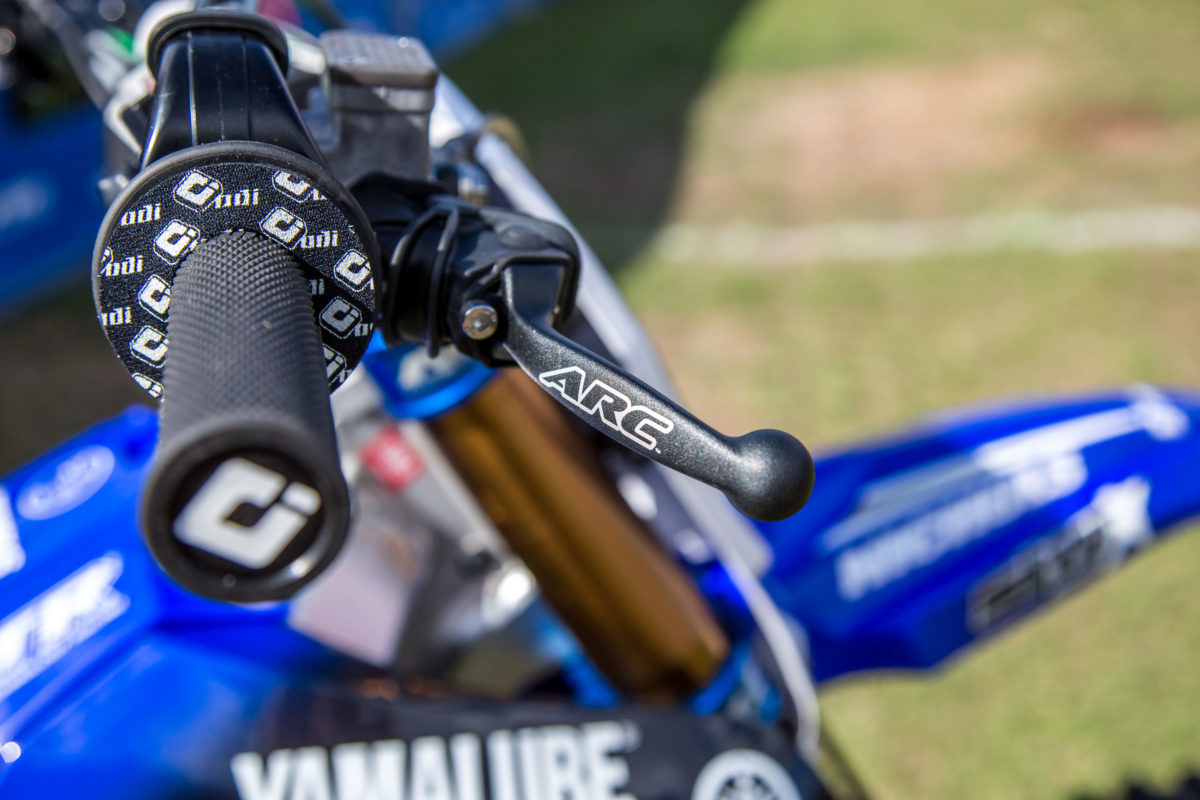 Star Racing Yamaha is using ODI lock on grips. Trevor called it “a mechanics best friend” because of the glue or safety wire not being required with installation. 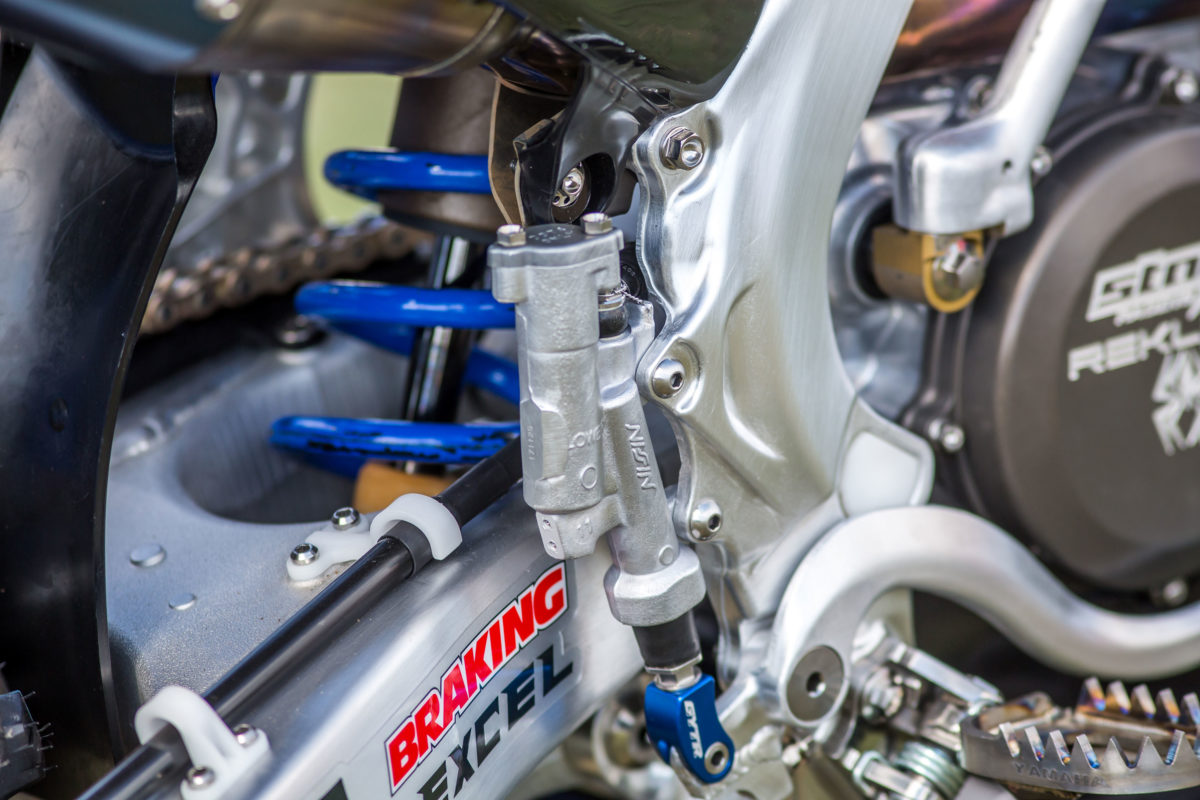 The rear master cylinder is a factory part. What makes it factory is that it has no sight glass on it. This is to avoid the glass being damaged during a race and causing a malfunction on the rear brake. The actual internal components of the piece are all stock. 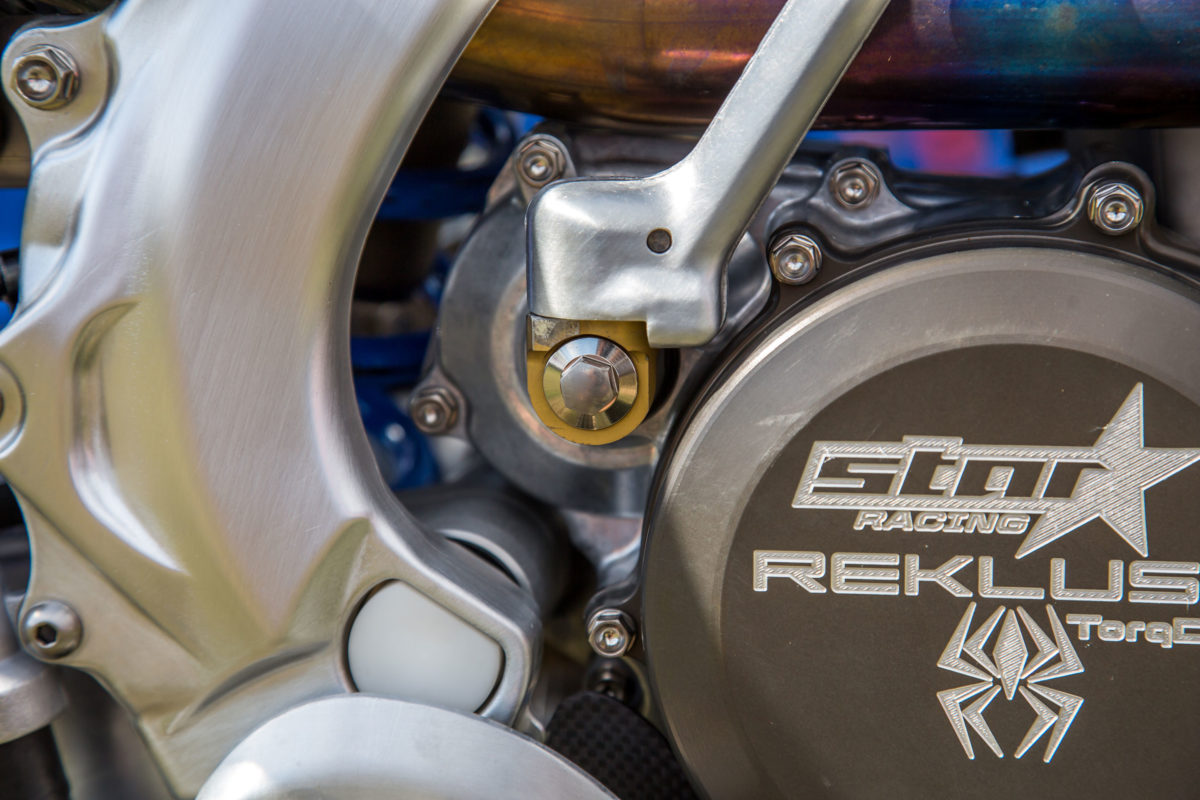 On the kick starter the knuckle that connects to the kick starter is titanium and provided by the factory. You will also notice in this photo where the swing arm pivot sits is a rubber plug. This plus is placed in a pocket like this to avoid mud packing in. A new item to the team is the Rekluse Torque Drive clutch system. They work with Yamaha to provide a complimentary product to their riders and engine package. 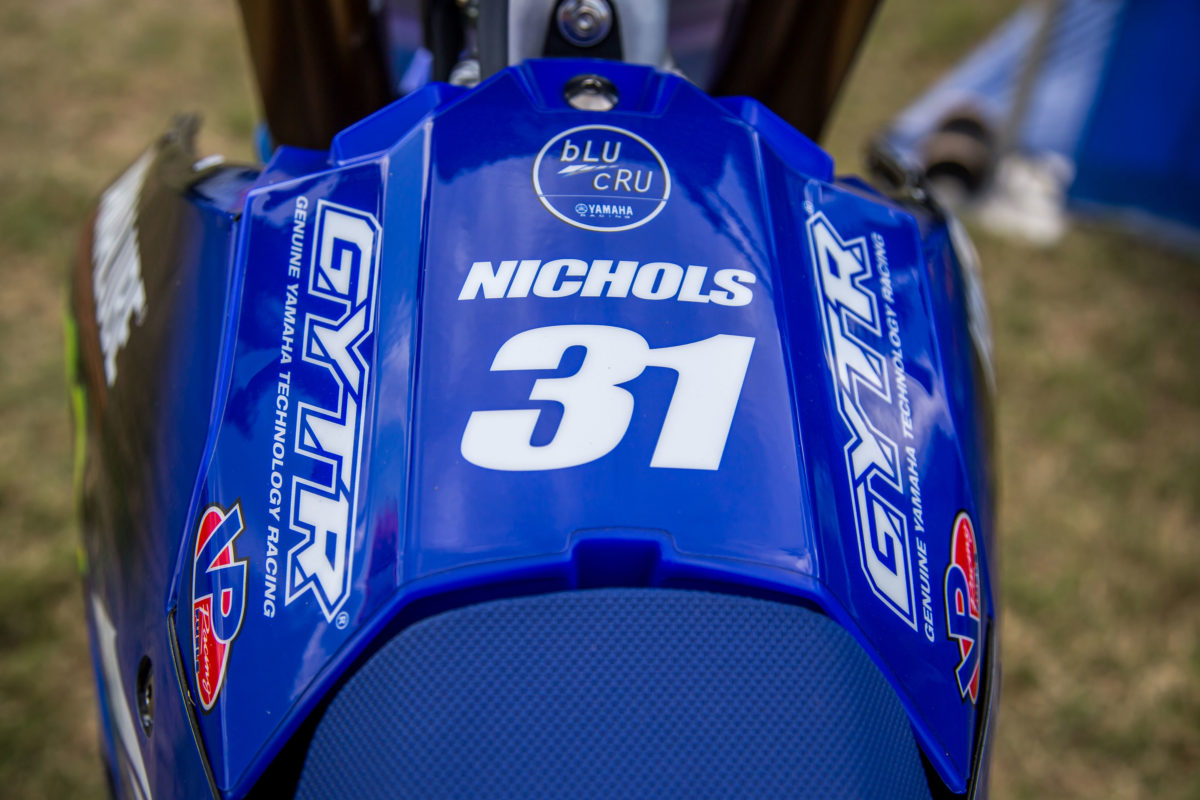 Cycra provides all the plastics to Colt Nichols Yamaha. The air box cover actually has two openings at the front to allow more air to pass into motorcycle. 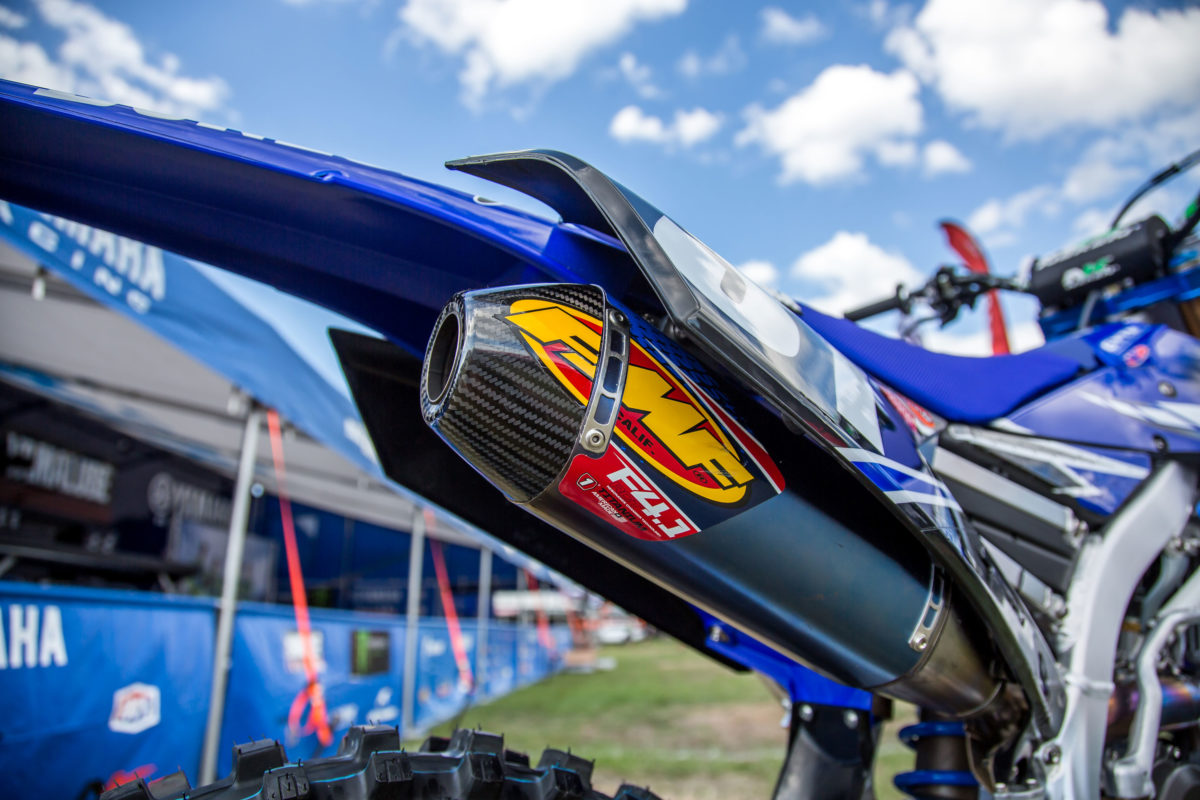 FMF provides the exhaust and has tailored it to compliment the Star Racing bikes motor package. 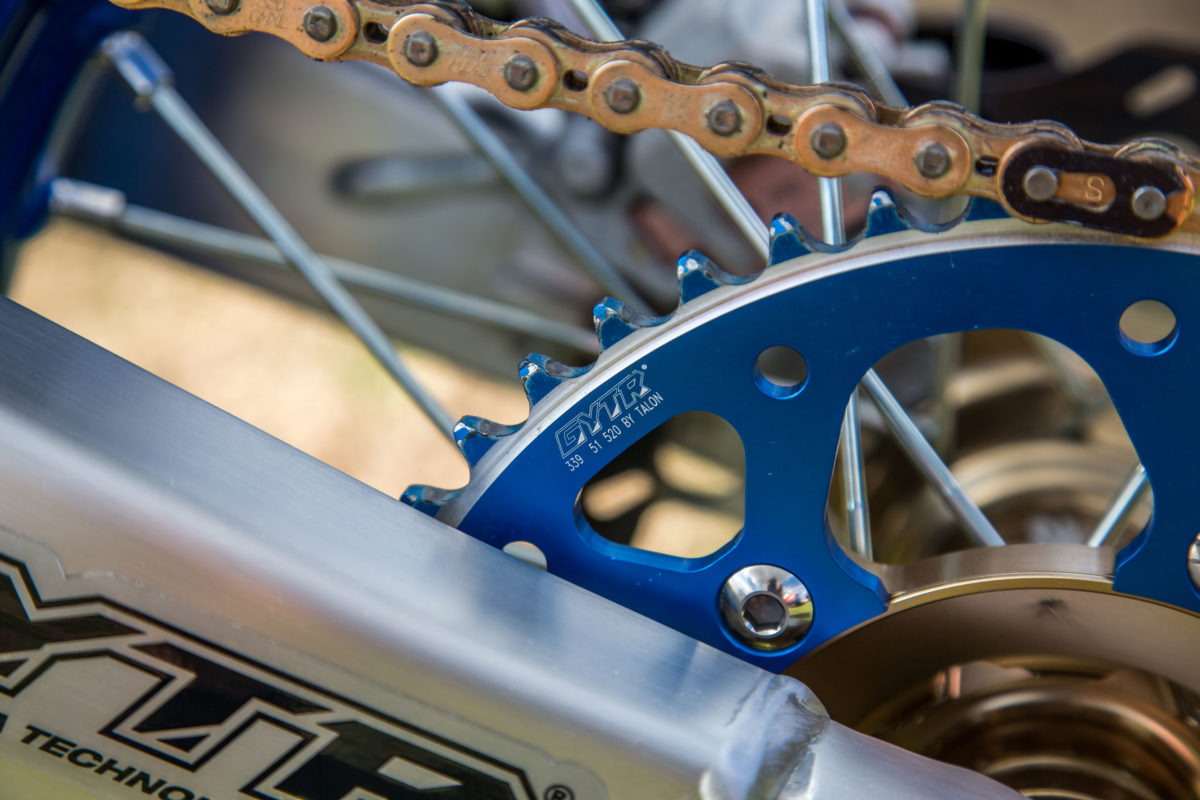 Another GYTR piece that can be bought over the counter is the rear 51 tooth sprocket. 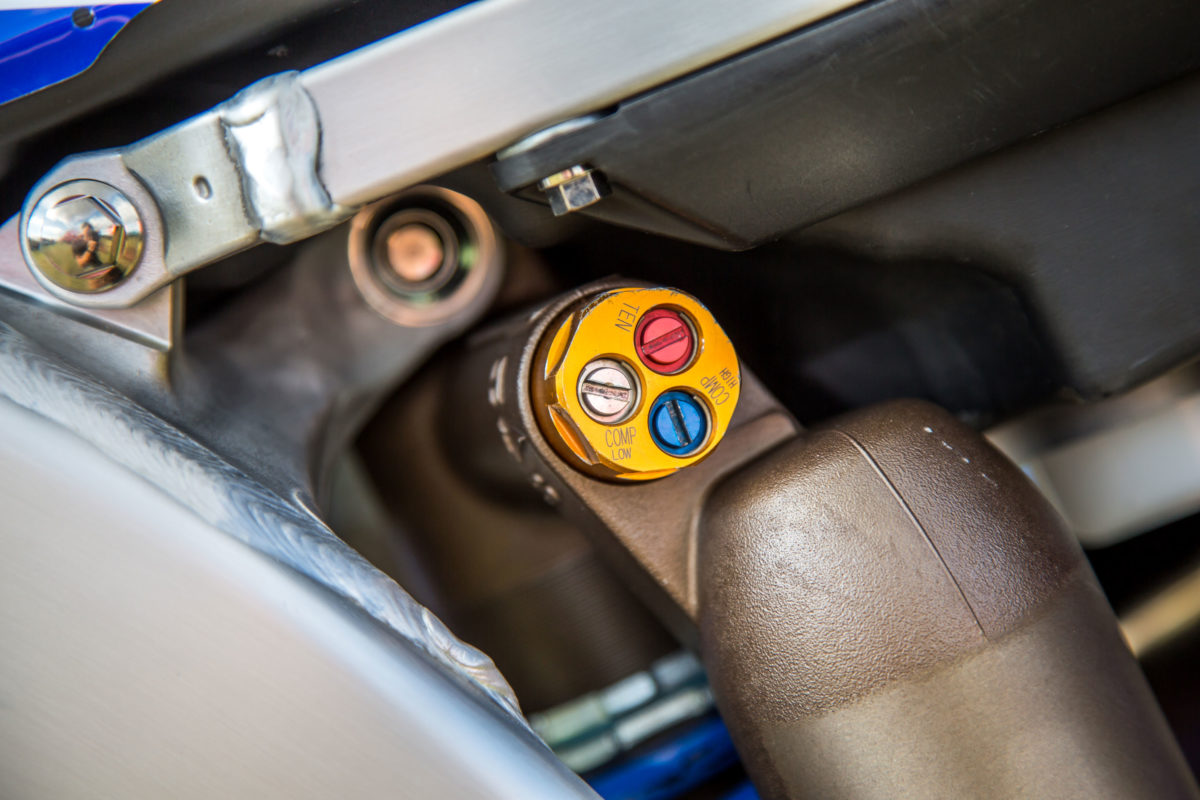 Another look at the A-kit Showa shock and adjustment that is available for the mechanics on top. 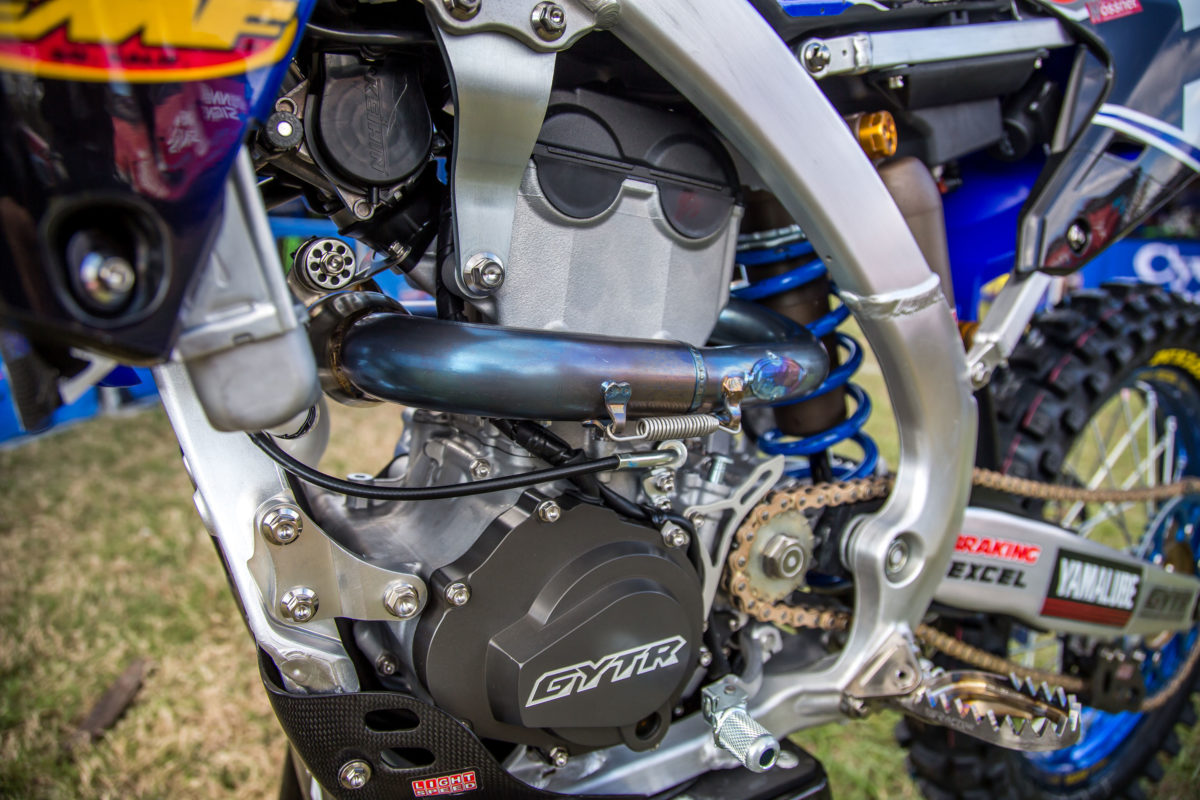 A lot of the factory bikes change engine hangars to alter the flex characteristics of the bike. That is not the case for Star Racing. All the engine mounts are what you will find on a stock 2018 Yamaha YZ250F. 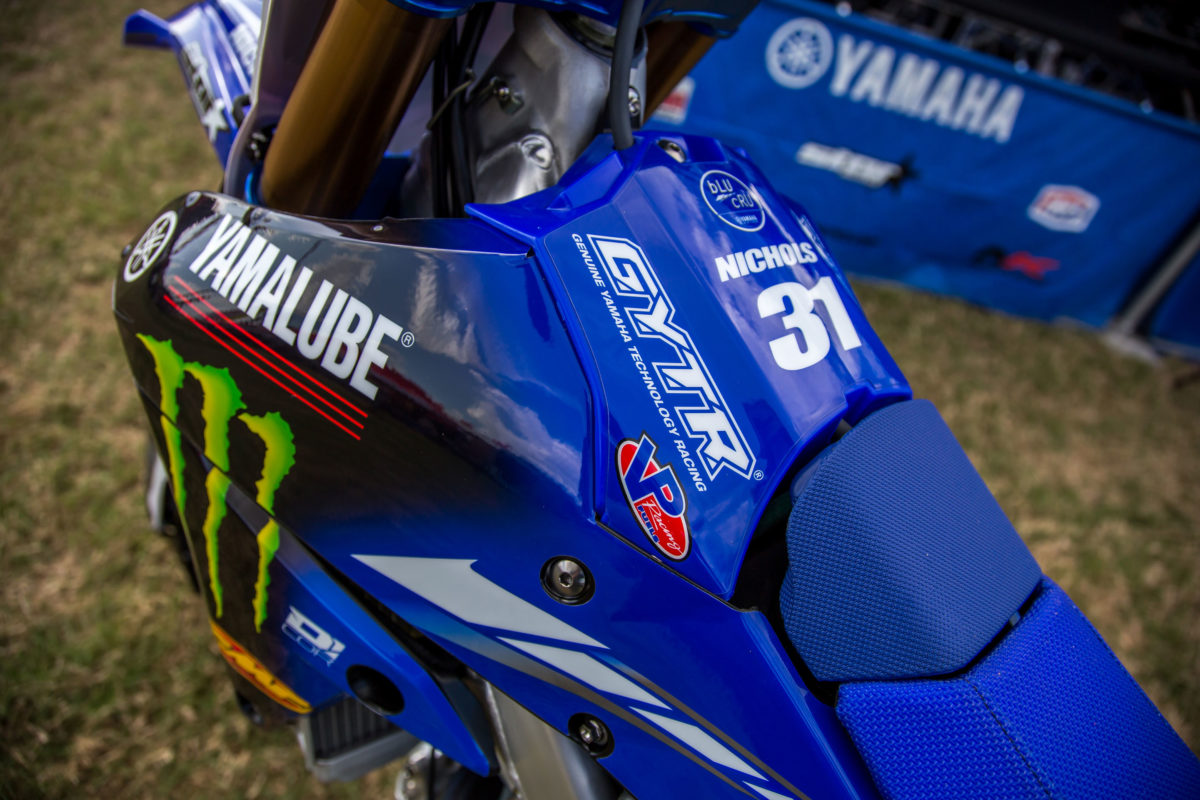 D’Cor graphics knocked it out of the park on the Star Racing Yamaha teams’s overall styling of the bike. To top of the build Colt runs a pleated seat to lock him in off the start or seat bouncing. 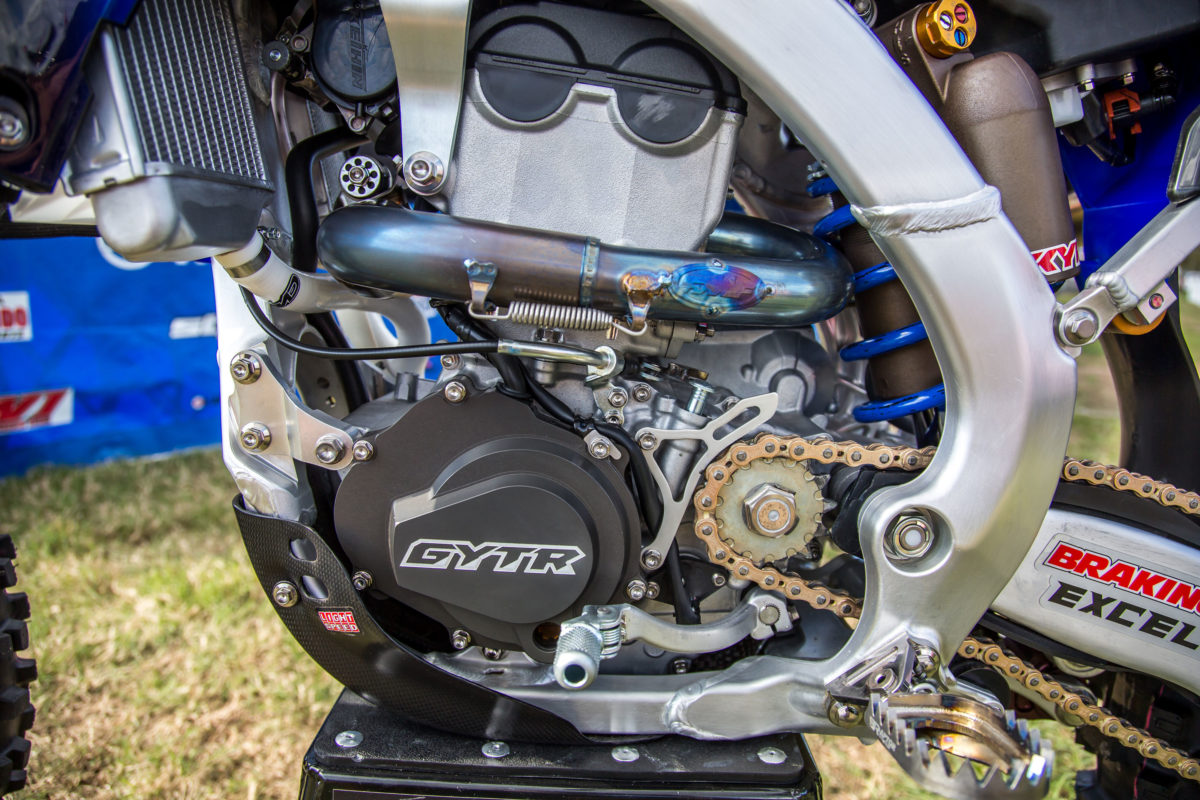 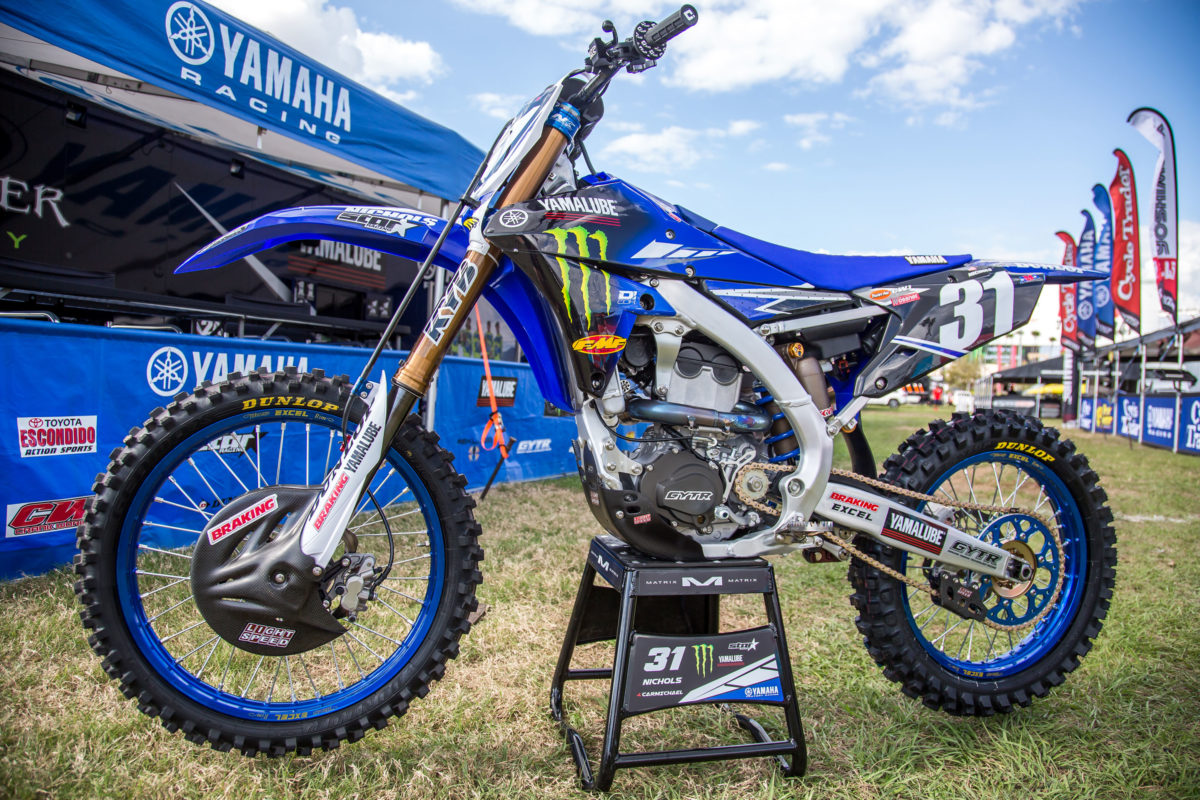 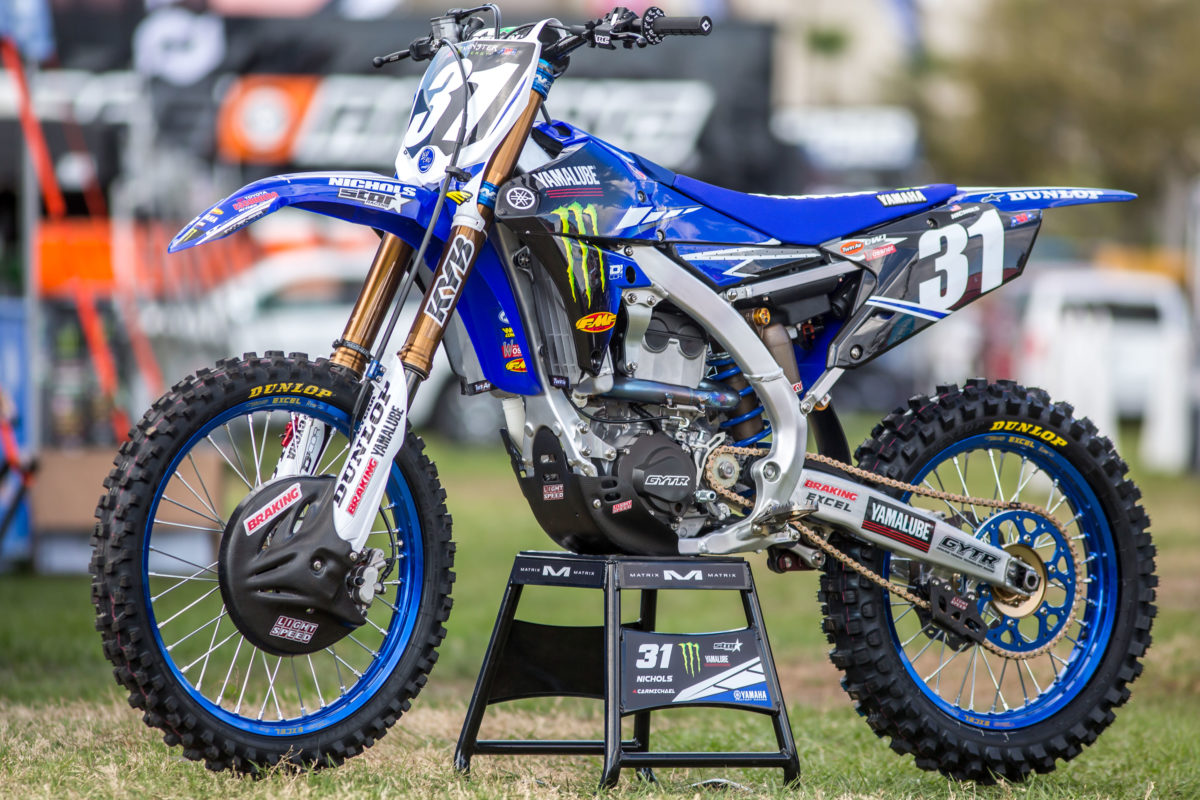