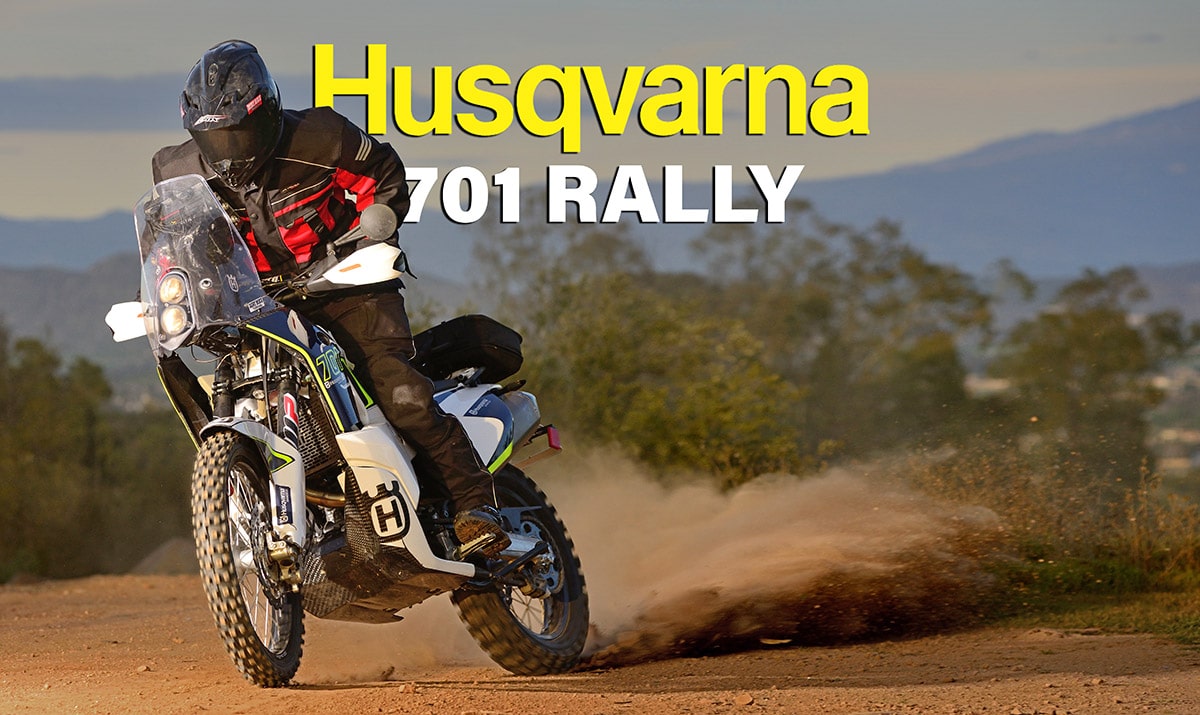 In the world of adventure touring, 1000-plus displacement models from KTM, BMW, Yamaha, Ducati and Honda are the status quo. Although these machines do have some off-road capabilities, the majority of them will never see dirt, except for the occasional fire road or gravel driveway. That’s understandable. These Goliaths are pushing 500 pounds in stock trim, and the suspension wasn’t designed to handle a ton of off-road abuse. Here at the magazine, we would rather ride in the dirt and only use roads when absolutely necessary. So, we set out to build something that delivers a perfect compromise between dirt and street capabilities. What unfolded was a surprise, even to us.
Husqvarna makes the 701 in two different configurations: a very popular Supermoto version and the Enduro model. We chose the Enduro model for its off-road capabilities and figured it would be easier to add some street capabilities later. Omega Fibre out of South Africa was the major contributor to this build, along with Husqvarna and a handful of other key companies. 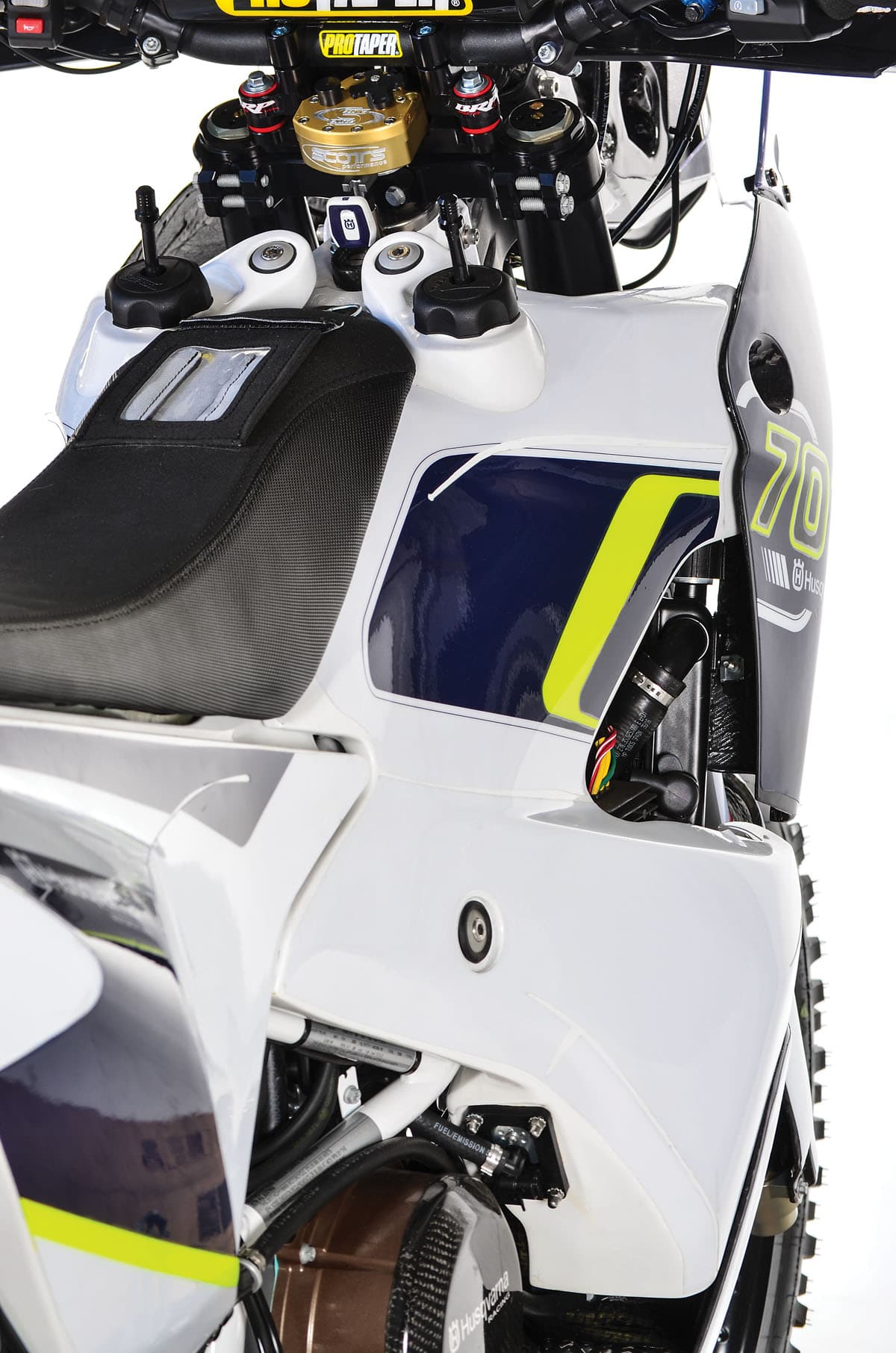 The two new fuel tanks hold 7 liters (about 2 gallons) per side and are constructed out of a carbon fiber/Kevlar weave. This allows the fuel pump to be relocated from the standard rear tank to the throttle-side front tank. All tanks are interlinked but can still be individually isolated for specific uses. 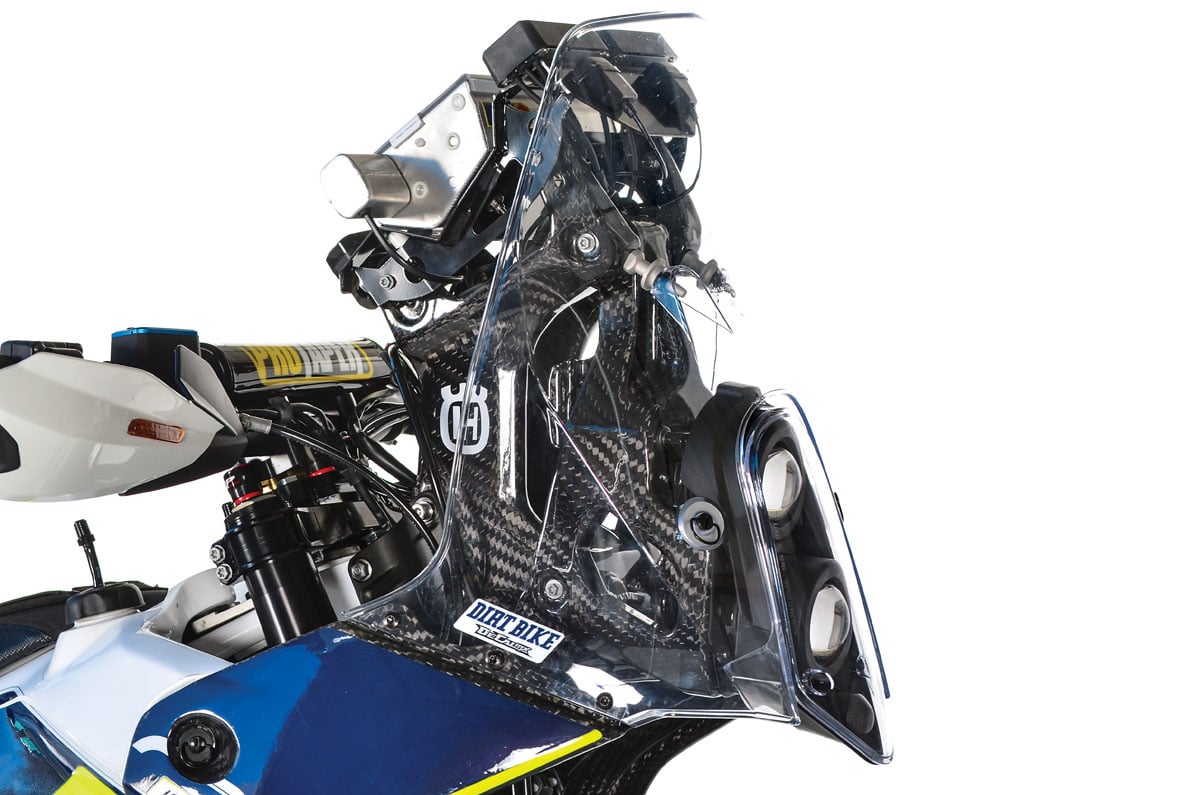 The front navigation tower is manufactured from carbon fiber that is solid-mounted directly to the main frame, holding the new lights that feature low- and high-beam halogen bulbs. The kit also includes a road-book holder that has a satin black gloss finish. The clear windscreen is manufactured to fit over the navigation tower for protection and aerodynamic wind resistance. 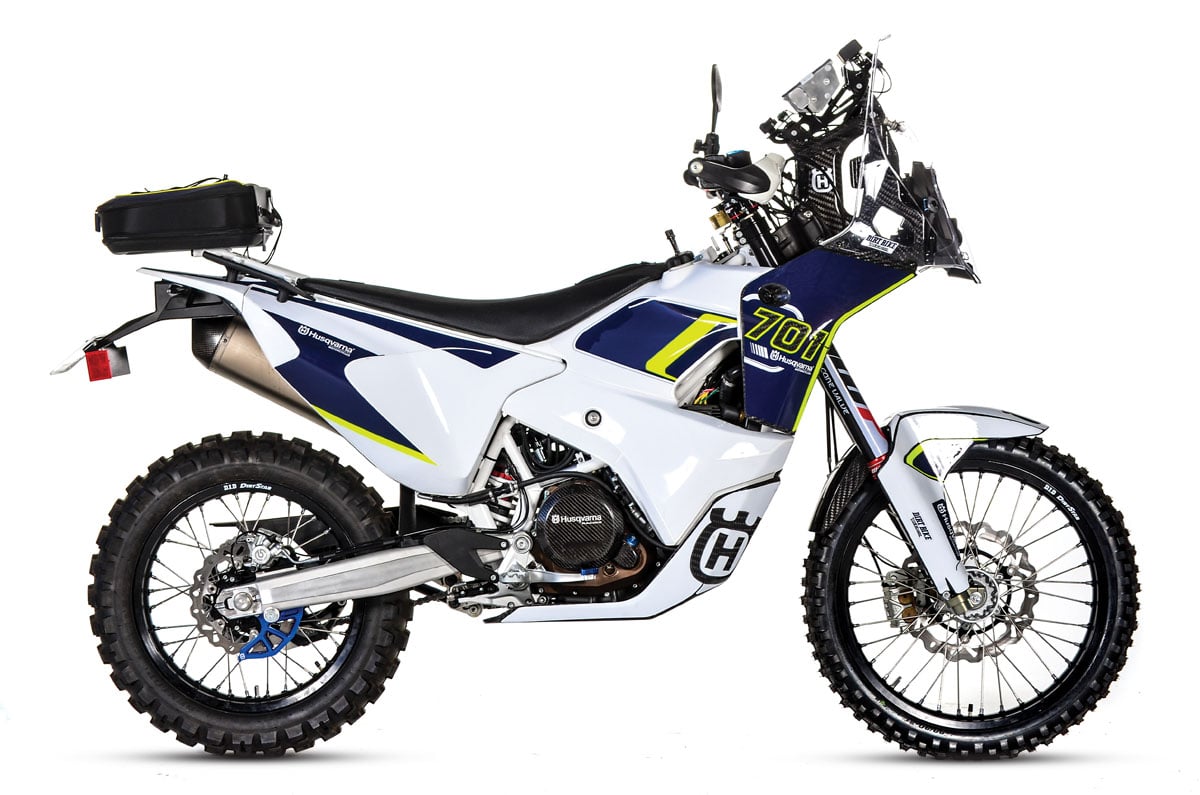 A standard high front fender or a low version can be used. We chose the low carbon fiber version because it comes in Omega’s kit and adds to the overall rally feel. 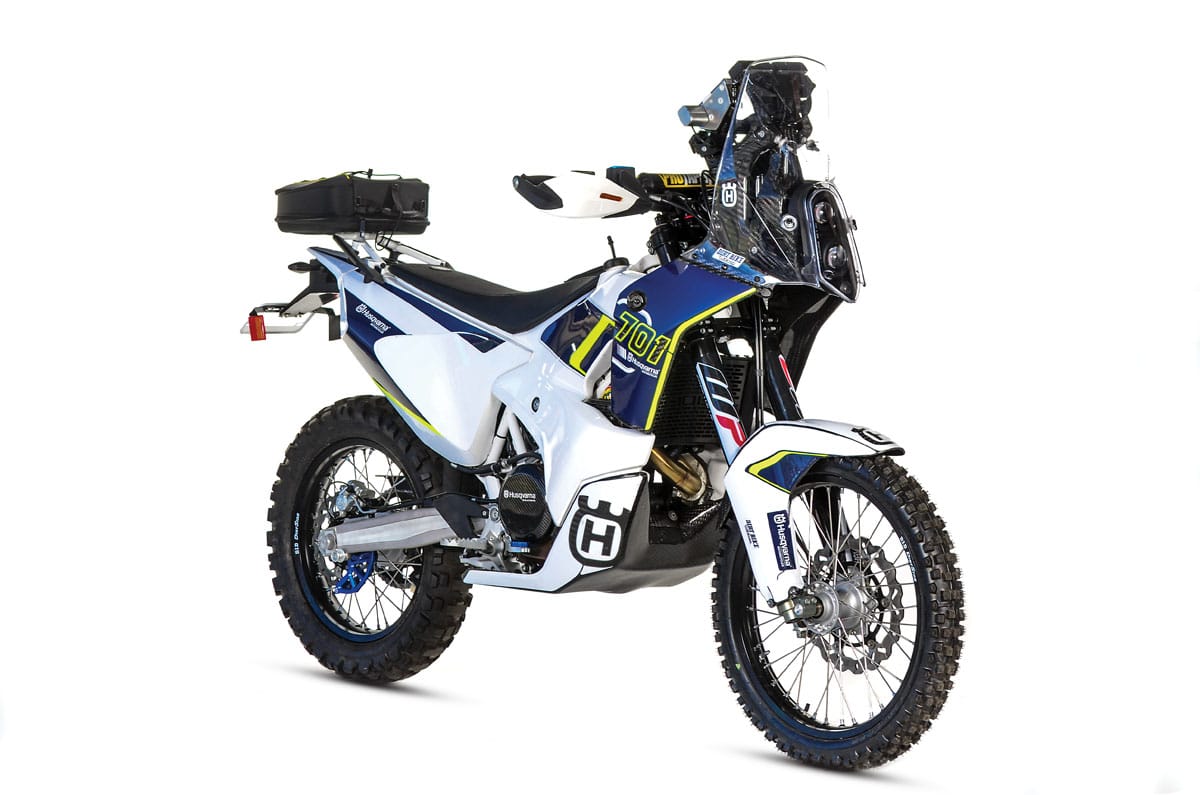 Your eyes are not playing tricks on you! Those are WP Cone Valve kit forks straight off the 450 factory Supercross bikes from a couple years ago. They slide right into the stock triple clamps, and with a couple minor front-brake mods (that will soon be available to the public), we made huge gains in the handling department. 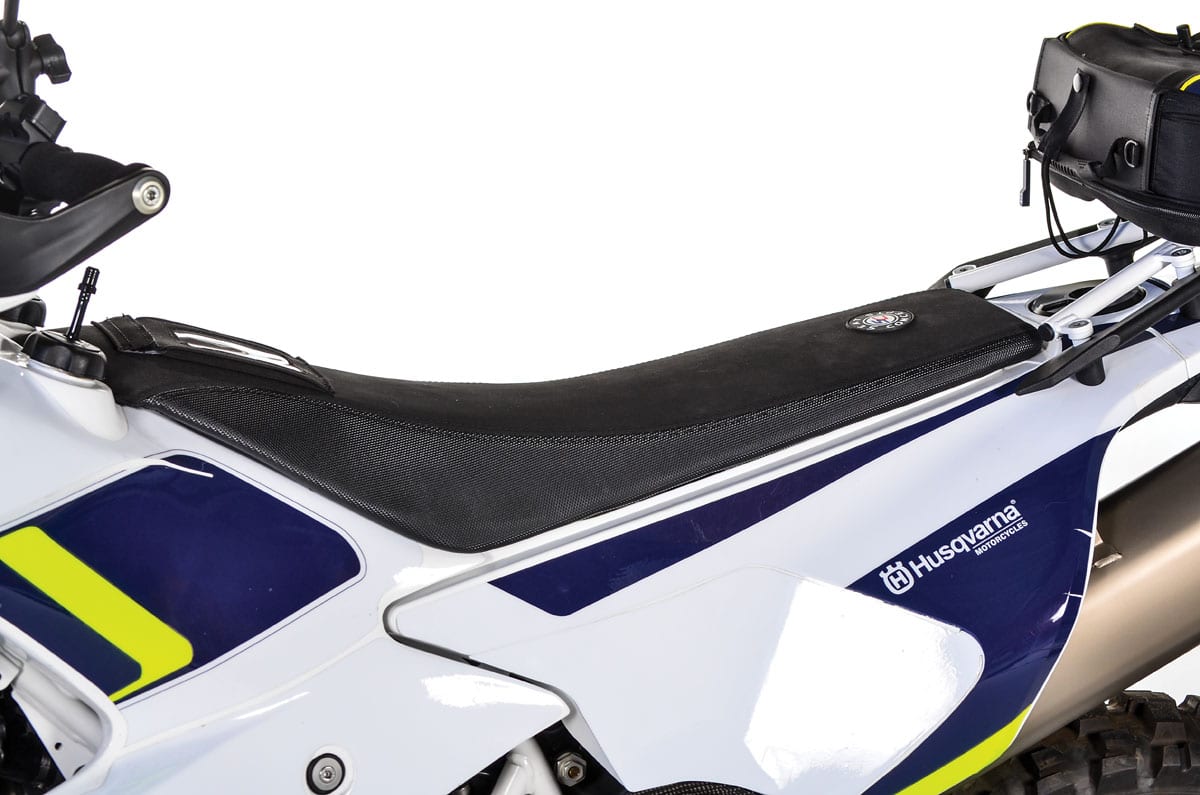 The new Omega hand-built seat pan is made of carbon fiber. We had the crew at Seat Concepts wrap it with an enduro-style, all-black, gripper seat cover. 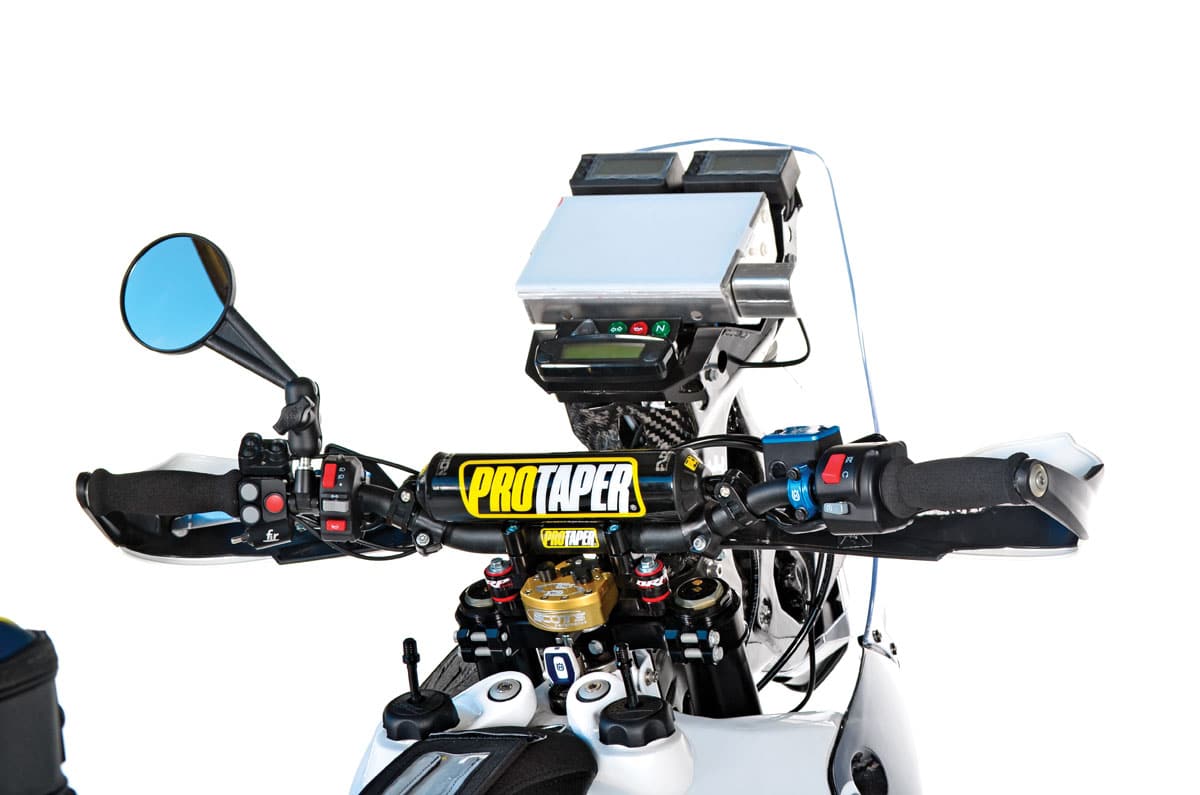 We installed Pro Taper Fuzion handlebars for some added impact absorption and a Scotts steering stabilizer with BRP mounting kit for preventing head shake at high speeds. The rider cockpit on a rally machine can look intimidating, but it’s all about function. 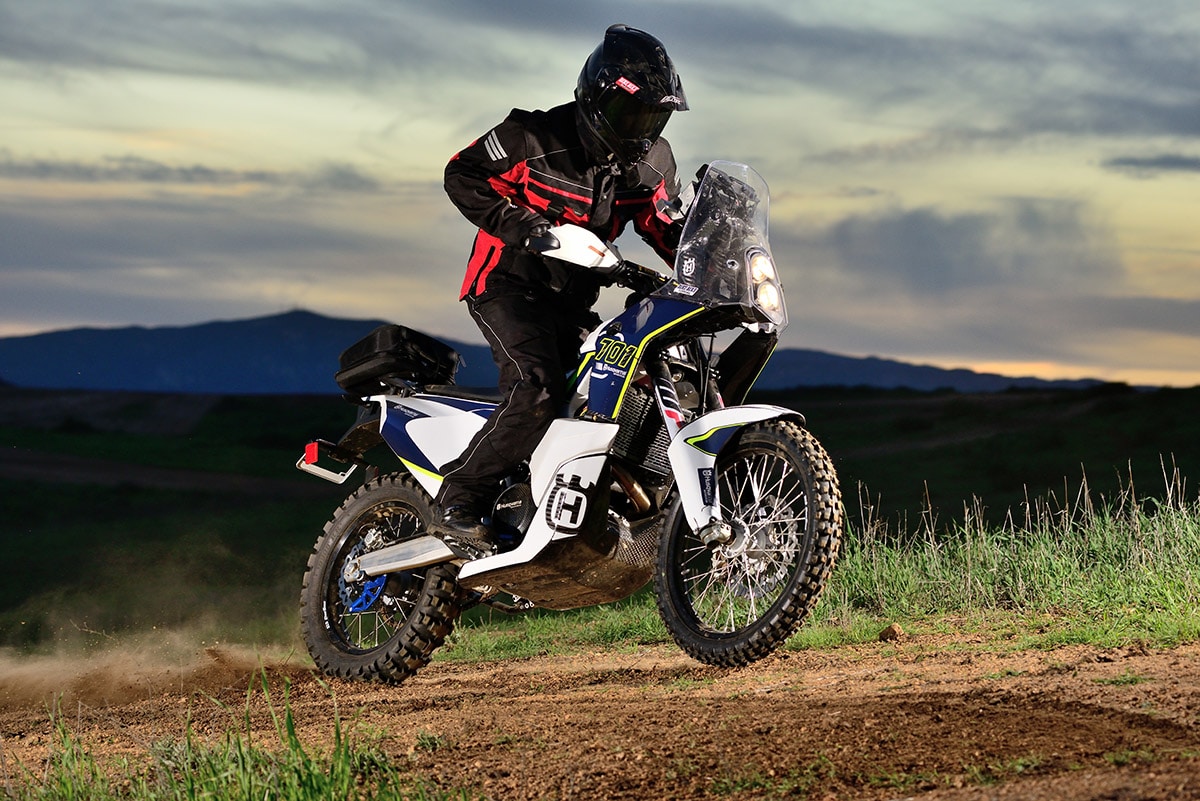 Our 701 Rally build was a blast to ride. The only problem we experienced was giving it back to Husqvarna when testing was finished. 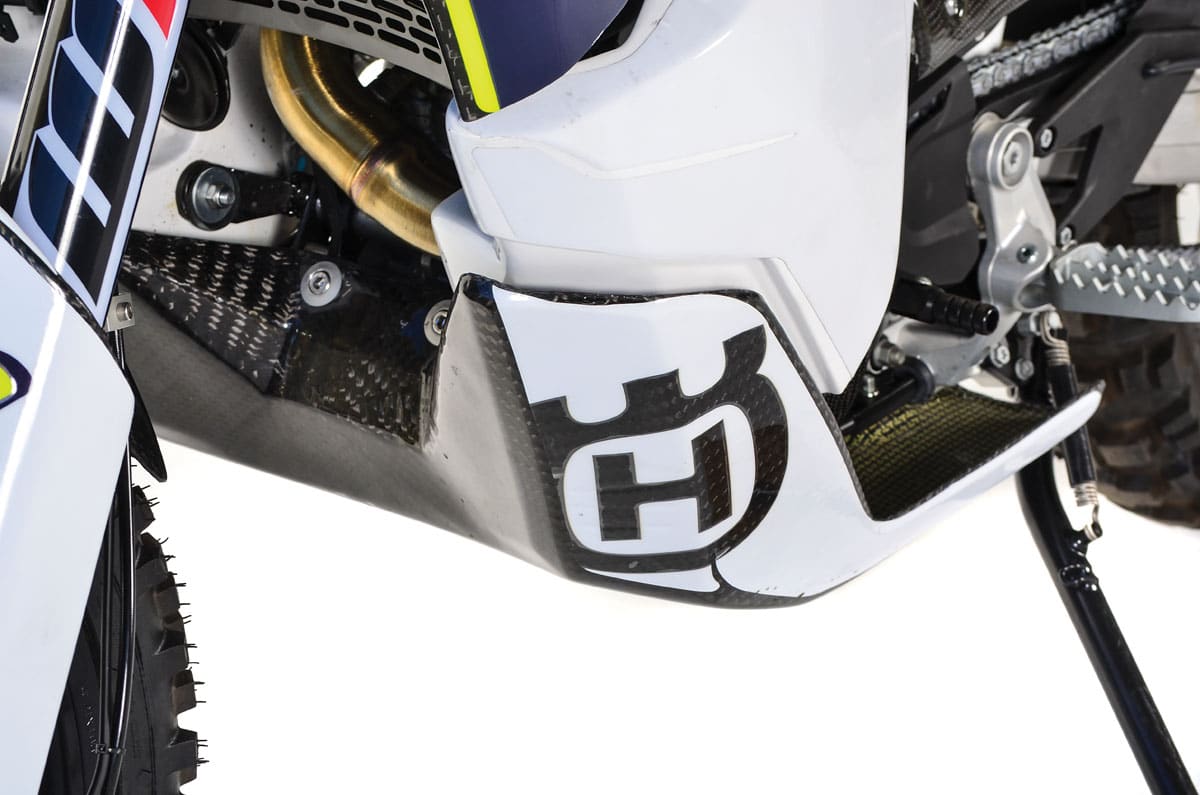 The Omega comes ready to install with fuel tanks, fairings, a skid plate, front fender, navigation tower, seat, windscreen, lights and all the hardware. Base cost is around $6400; get on the waiting list now. 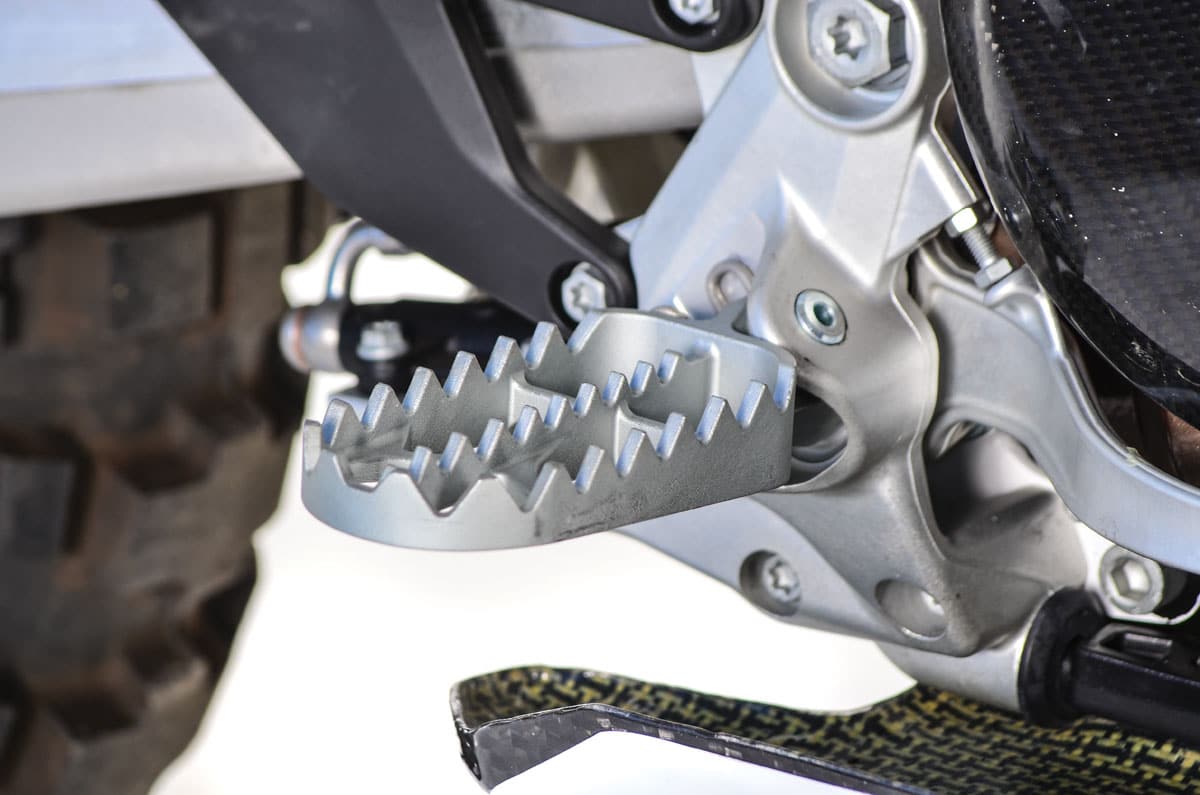 The Husqvarna Rally pegs are wider, longer and feature a more aggressive tooth design than the stock 701 pegs. They can be purchased through Husqvarna’s hard-parts catalog, along with the rear fender bag, reservoir caps, brake-pedal tip and shifter tip. 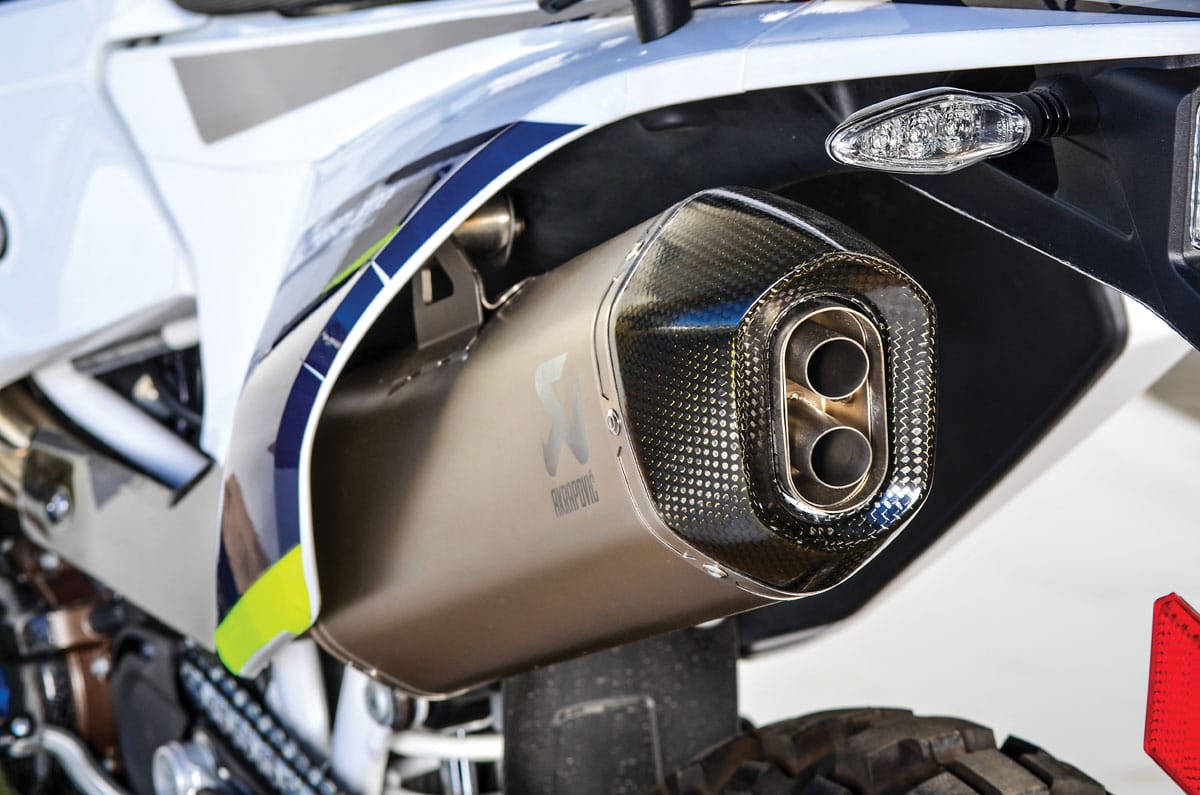 The Akrapovic slip-on exhaust was the only engine performance modification on our rally build, because 701cc makes more than enough power for us off-road. 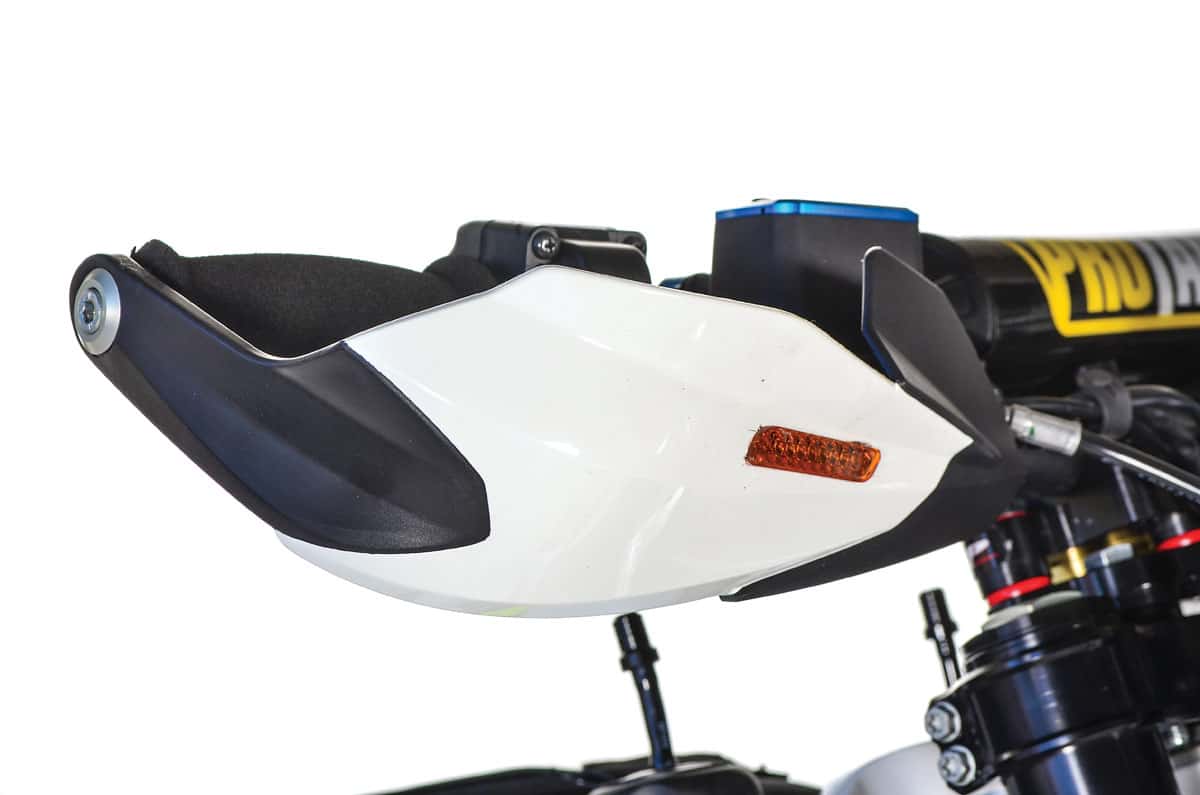 To maintain the sleek rally look up front, we did some minor fabrications, incorporating the blinkers into the wrap-around handguards.