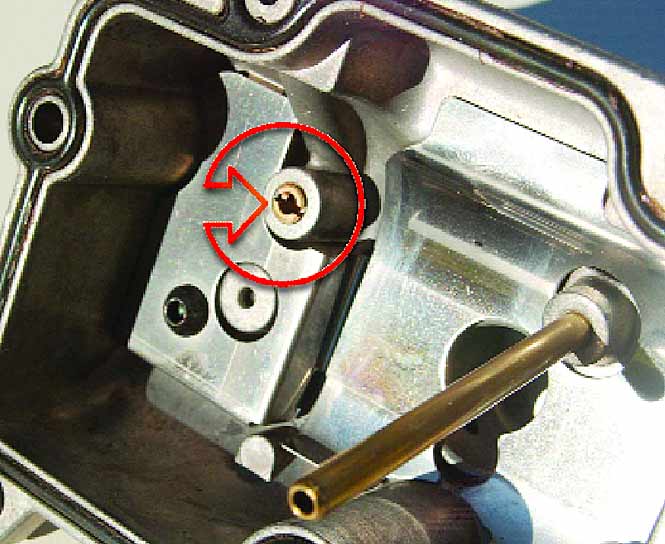 The modern high performance four-stroke engine is, for the most part, strapped with using carburetors, albeit the incredible Keihin FCR unit, which until now has played a dominant role in the evolution of the modern ’stroke dirt bike. It’s certain that the carburetor is a full dinosaur and slated for extinction with the evolution of fuel injection, but for the next few years dialing in the FCR Keihin is crucial to track and trail performance.
Last month we worked on the fuel screw and its proper adjustments. Now we’ll go into the accelerator pump, which is next to impossible to achieve without a properly adjusted leak jet.

The standard leak jet is replaceable, but it ain’t easy (you have to remove the float bowl for access). R&D’s Power Pump2 sells for $139.95 and allows for easy changes, both on the trail and the track.

DIALING IN THE ACCELERATOR PUMP
The accelerator pump system is a very simple device, and easy to adjust if you follow the simple step-by-step guidelines laid out below. The first key bit of information is that all four-stroke engines have a lean air-fuel ratio when the throttle valve is opened semi-quickly. The accelerator pump is designed to mask over this temporary lean condition, allowing the engine to build the needed rpm, and once the rpm increases, it will automatically draw the fuel from the jets without the aid of the accelerator pump. The leak jet in the float bowl is a tuning device much like the other jets in the carburetor, which when used correctly will provide the engine with the correct amount of fuel.

1.)
Last month’s issue explained how to adjust the fuel screw and pilot jet; DO THIS BEFORE MOVING TO STEP 2.

2.)
A lean bog needs to be established, once the engine is warmed up, leaning out the accelerator pump squirt via a larger leak jet. The leak jet needs­­­ to be changed to a leaner jet. To be honest, tuning the stock leak jet is a tough chore. Because you must change out the jet, it requires you to remove the float bowl every time that you make a change. A far easier way is to install an adjustable leak jet device (both R&D Racing and Merge Racing offer units). Because we’re working with R&D, we tested their Power Pump.

3.)
Now that a lean bog has been achieved, go back incrementally in the other direction (clockwise/richer). If you have an adjustable device, turn it in a quarter turn at a time until the throttle response is sharp and instantaneous. If you use the original leak jet system, you will need to purchase a handful of jets, above and below the stock size.
Now you have the ability to dial in the performance of your four-stroke, and this is especially key when the altitude changes, as well as severe heat or cold, which can hamper the throttle response.
Again, a big thanks goes to R&D and if you have any questions call them at (562) 864-8218