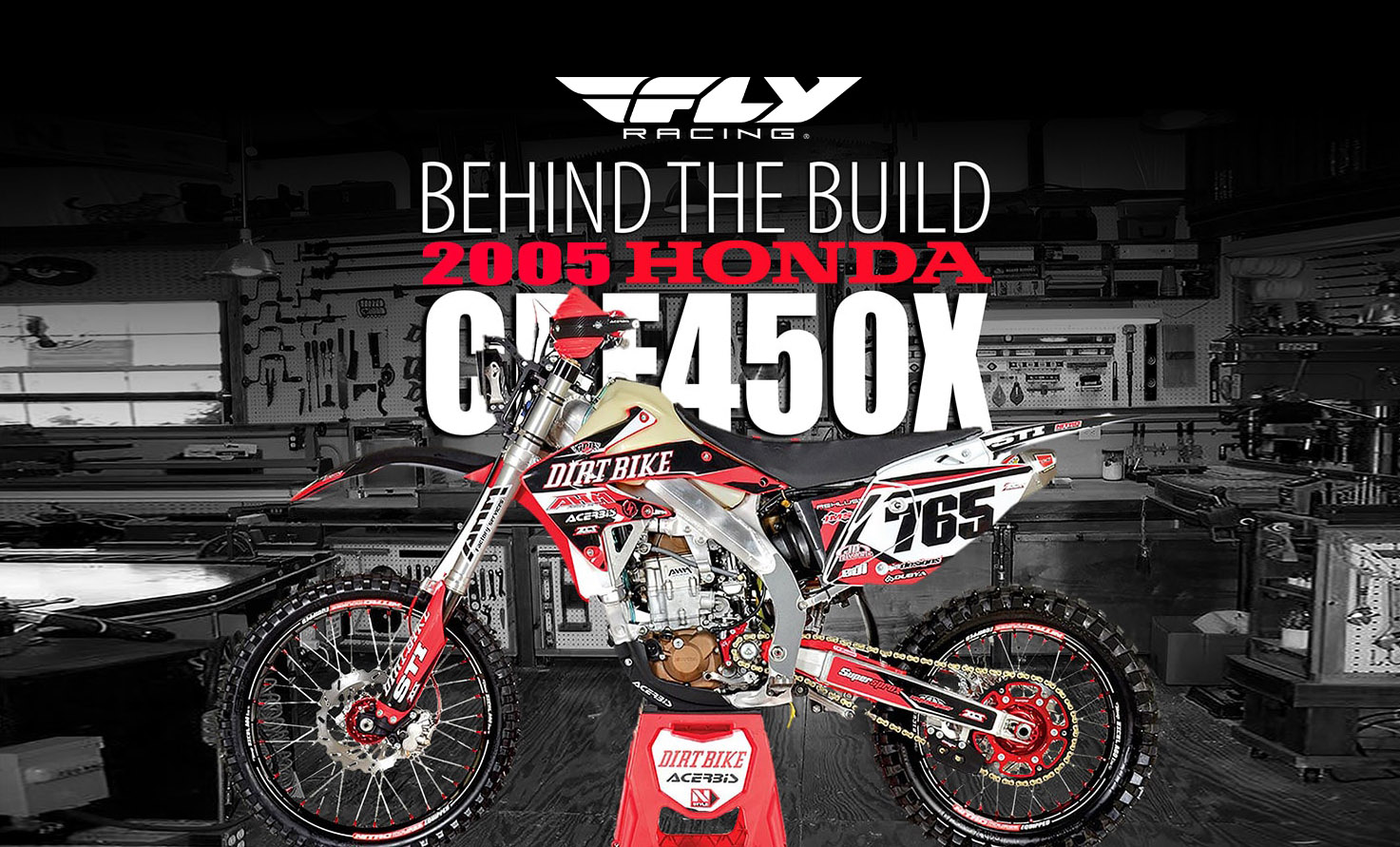 During a bench racing session the phrase was muttered, “We should race the 3 Brothers 24-Hour endurance race at Glen Helen this year.” With that one sentence, Josh Trimble, Randy Garrett, Josh Dalton, Joey Martin and Dan Dreier’s lives would never be the same. But, who was going to donate their bike to the cause? Josh Dalton’s dad spoke up and offered up “Old Faithful”—his 2005 Honda CRF450X—and so the adventure began.

The Honda CRF450X is probably one of the most proven endurance race machines of all time, winning the 24-Hour event and SCORE championships over the years, but those machines were highly modified. Old Faithful was far from a highly modified race machine. As a matter of fact, about the only parts on it that could be considered race parts would have been the dry-rotted Dunlop tires and ODI lock-on grips that had replaced the OEM parts.

The first plan of throwing on some new tires and filling it up with gas and heading to the start line was definitely not an option. At this point the team made a very smart decision in calling Brandon and the crew at AHM Factory Services for some help. With that call, the project went in a completely different direction—full teardown and race modifications were the new plan.

Luckily, for Old Faithful AHM Factory Services has ample amounts of experience making the CRF450X race-ready. The stock engine was rebuilt just to make sure it was bulletproof for 24 hours of racing. An older CRF450R head was installed after receiving some top-secret AHM modification that uses different cam specs. A complete Rekluse clutch was also installed with a billet-aluminum cover for added durability.

To give the engine some wow factor, AHM added some Cerakote finishes to the valve cover, ignition cover, inner clutch cover, water pump and oil-filter cover. AHM also rebuilt and tuned the carburetor to match the new internal engine modification and the complete Pro Circuit stainless steel aluminumT-6 exhaust system. At this point the engine was ready to go back into the frame, but the crew at AHM was far from done. Next up: suspension rebuild and modifications.

Finding a suspension configuration that will work well for five different riders going expert-level speeds is not an easy task, but again, the AHM crew has plenty of experience in this department because of their close working relationship with Mark Samuels and the SLR factory Honda off-road team. It’s all about compromise for the big picture. We couldn’t get the exact specs out of Brandon, but he did let us know the race setup is a bit more progressive and a lot stiffer overall, giving it more resistance to bottoming without making it harsh on smaller bumps. There’s also some specialty coating mixed in throughout the suspension but nothing crazy.

Bolt-on items are a huge part of any endurance machine project, and Old Faithful received its fair share of them. An oversized IMS tank equipped with a dry-break filling system is probably the most common refueling setup for serious teams competing at the 24-Hour event. It’s hard to beat a 3-gallon fill-up in about 5 seconds.

Another must for the event is a good light. Newer fuel-injected bikes might not require additional wiring upgrades, but our 15-year-old CRF450RX needed the stator rewound. With the extra power to run it, Old Faithful was outfitted with a Baja Designs dual XL system featuring a quick release that is solid-mounted to the fork tubes, allowing a light installation or removal in less than a minute.

Wheels are always overlooked when building an endurance race machine, and starting off with a bulletproof set of wheels is key. And if you have the means, two sets of bulletproof wheels are better. Dubya laced up a set of wheels using billet-aluminum red Talon hubs, oversized stainless steel spokes, red anodized nipples and black Excel A-60 rims. We wrapped those in STI Tech 2 rubber and used Nitro Mousse foam inserts to eliminate the chance of getting flat tires.

Going into most events with a 15-year-old machine would probably give most racers a little anxiety, but not Team Old Faithful. Josh Trimble, Randy Garrett, Josh Dalton, Joey Martin and Dan Dreier had visions of winning. A complete rebuild on a proven setup by companies that have done it thousands of times gives a racer added confidence. With some minor adjustments on race morning, the team was ready to compete. The race didn’t go completely smooth, but Old Faithful kept plugging along. In the middle of the night there was a minor light problem due to a tip-over that is still a little fuzzy on which rider was involved. Besides that, it was just the typical filter changes, tire changes, rider changes and all-around fun times. At the end of the 24 hours, Team Old Faithful learned a lot about each other, themselves and the bike. With Brandon Paul (765) watching over them, all the riders came away safe, and trust us, they will be back at Glen Helen next year to do it all over again!