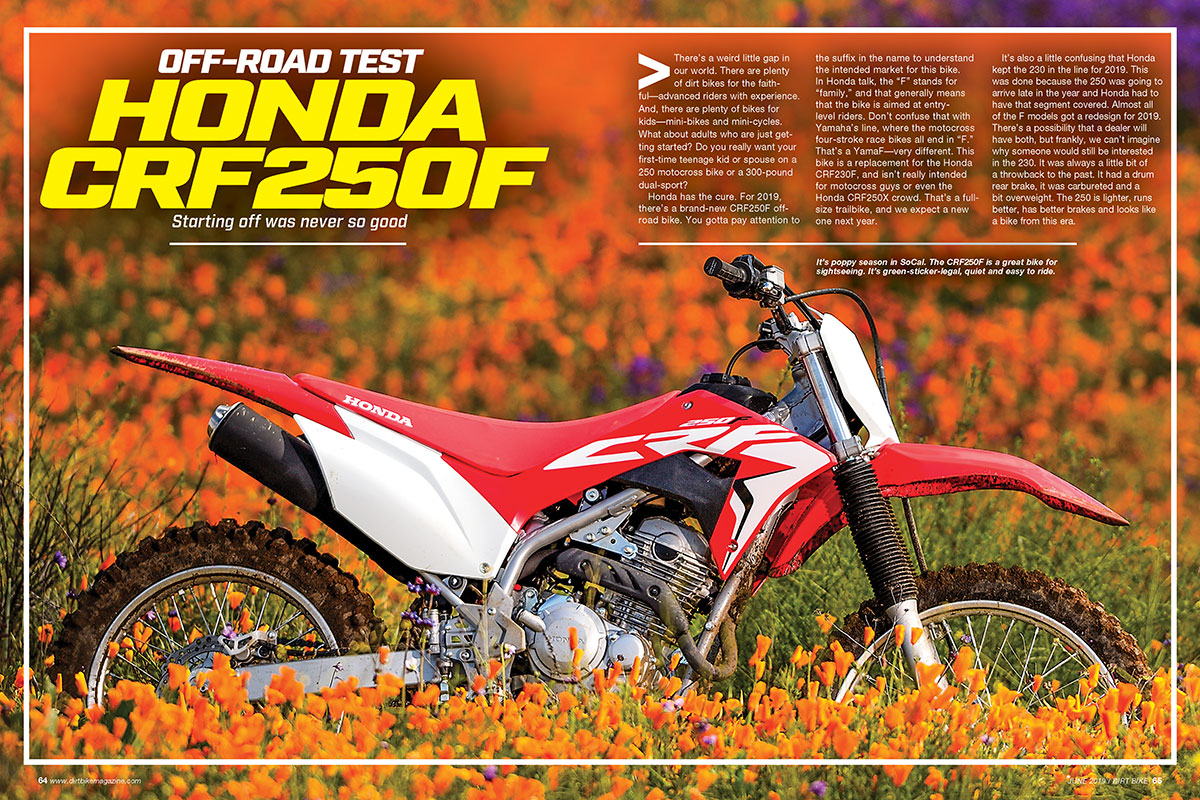 There’s a weird little gap in our world. There are plenty of dirt bikes for the faithful—advanced riders with experience. And, there are plenty of bikes for kids—mini-bikes and mini-cycles. What about adults who are just getting started? Do you really want your first-time teenage kid or spouse on a 250 motocross bike or a 300-pound dual-sport?

Honda has the cure. For 2019, there’s a brand-new CRF250F off-road bike. You gotta pay attention to the suffix in the name to understand the intended market for this bike. In Honda talk, the “F” stands for “family,” and that generally means that the bike is aimed at entry-level riders. Don’t confuse that with Yamaha’s line, where the motocross four-stroke race bikes all end in “F.” That’s a YamaF—very different. This bike is a replacement for the Honda CRF230F, and isn’t really intended for motocross guys or even the Honda CRF250X crowd. That’s a full-size trailbike, and we expect a new one next year.

It’s also a little confusing that Honda kept the 230 in the line for 2019. This was done because the 250 was going to arrive late in the year and Honda had to have that segment covered. Almost all of the F models got a redesign for 2019. There’s a possibility that a dealer will have both, but frankly, we can’t imagine why someone would still be interested in the 230. It was always a little bit of a throwback to the past. It had a drum rear brake, it was carbureted and a bit overweight. The 250 is lighter, runs better, has better brakes and looks like a bike from this era.

Who should be interested in a 250F? Technically, it’s a full-size bike with a 21-inch front wheel and an 18-incher in the rear, but it’s just a little shy of life-sized. Consider it a 7/8-inch-scale model. The fork has 8.5 inches of travel, and the rear suspension has 9.1 inches. The seat height is listed at 34.8 inches, but it’s also very narrow, so you don’t use up valuable inseam with a wide seat. Anyone over 5 feet tall should be able to handle the 250F, and even experienced riders can have fun on it. It’s enough of a real motorcycle that it can keep up on the average trail ride. It has a five-speed tranny with a nice, low first gear, so you can get over anything really technical. It’s not particularly light by the standards of race bikes. The official weight is 265 with a full tank. For this type of bike, that’s fine. No one is going to jump a 65-foot double on a CRF250F. If someone even considers that, then this is the wrong bike.

You can ride dirt roads, singletrack trail and even do a little hill-climbing. The CRF250F is a great universal trail bike, but you have to be aware that it has limitations. Don’t place wagers on who will get to the top first, and don’t expect to skim Supercross whoops. The CRF250F doesn’t have a headlight, and it isn’t street-legal, so if you’re looking for that, the CRF250L dual-sport is more in your lane. The price is about the same, but the CRF250F is far lighter and has better overall performance. The real competition for this bike is the vast flood of Asian imports that are available through web sales for much less. Some are good, some aren’t. There’s almost no way to know, because most of these importers have no track record. The pitfalls there are poor resale value, poor parts availability and vague manufacturer support. Bikes like the Honda tend to be passed down within families for generations, but only if they are capable of lasting for generations.