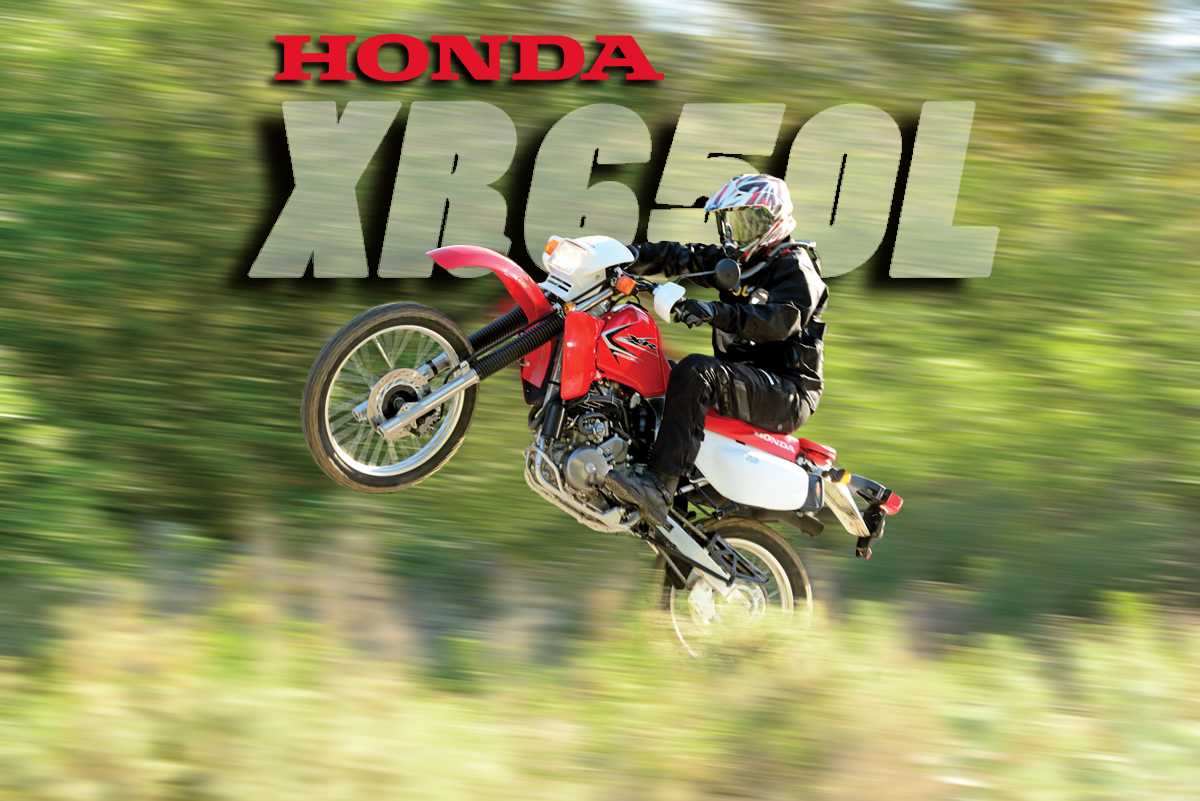 There’s one in every Honda showroom. It won’t be in the front window or on prominent display, but it’s there, and it will be sold, replaced and sold again. The Honda XR650L is a staple in the dirt bike world. At one time it was considered the most dirt-worthy dual-sport bike you could buy. Now, it fulfills a different role as a cross-platform machine that serves adventurers, commuters and trail riders. Even if you think you know it, the XR650L is worth another look. 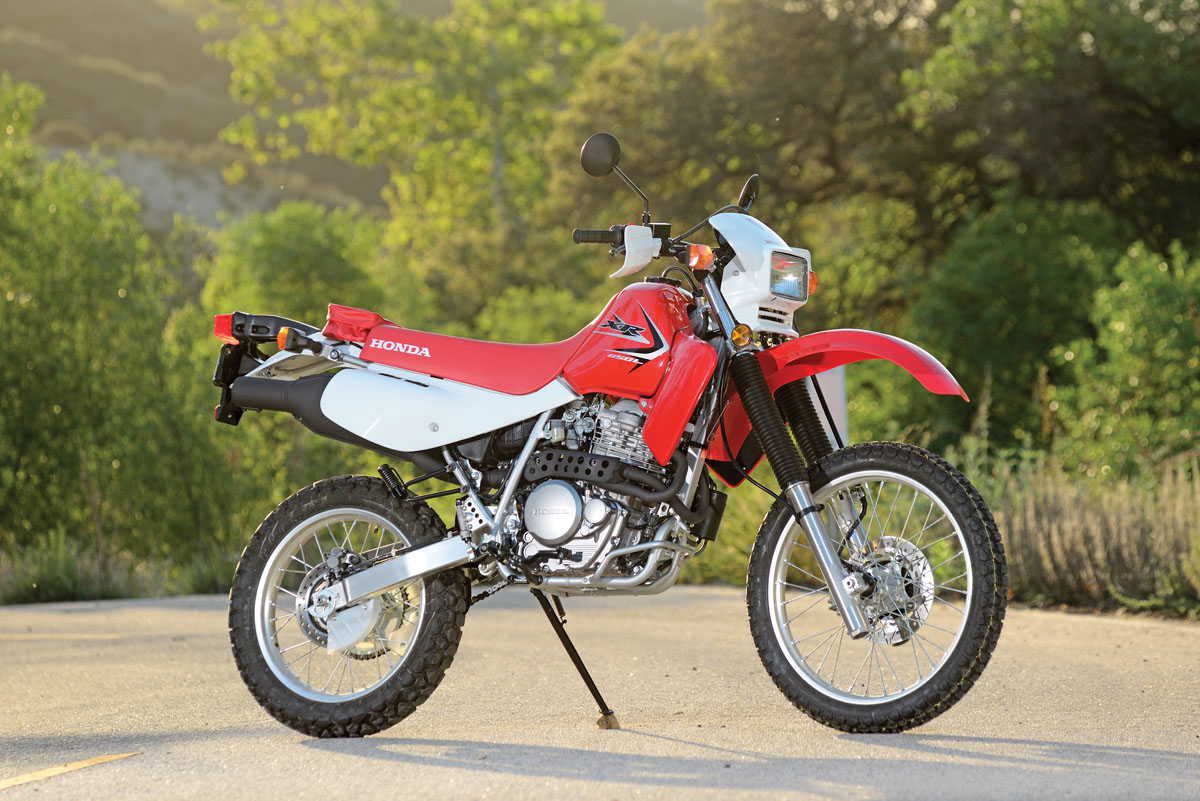 WHAT YOU MIGHT NOT KNOW
The Honda 650L isn’t that far removed from a Grand National champion. It was based on the XR600R dirt-only bike that Scott Summers used to dominate the GNCC series in the ’90s. To make it into a dual-sport bike, Honda added electric start, more displacement and stiffer suspension. Well, the motor isn’t actually the same one from the XT600R; to be more accurate, it’s from an ’80s street model called the NX650, which was very similar but already had electric start and a taller primary ratio. The motor is in a milder state of tune than that of the 600, but the added displacement gives it a smoother, torquier power delivery.
It has top-level suspension. The fork and shock can hold their own in comparison to modern equipment. Back in the early ’90s, when the L was first made, there was a big controversy as to whether or not upside-down forks were better for off-road riders. For motocross, the upside-down designs were clearly superior, but for off-road, the switch was made for marketing reasons and had little to do with what the test riders thought. The fork on the L is a 44mm Showa cartridge conventional fork that is essentially the same thing that many top off-road riders used back then. The compression adjuster is on the bottom, but there’s no rebound adjuster. That appeared on the liquid-cooled XR650R. Regardless, the fork on the XR is excellent and can be made even better with some attention. It’s a little stiff and springy and could benefit from lighter springs and heavier oil viscosity. 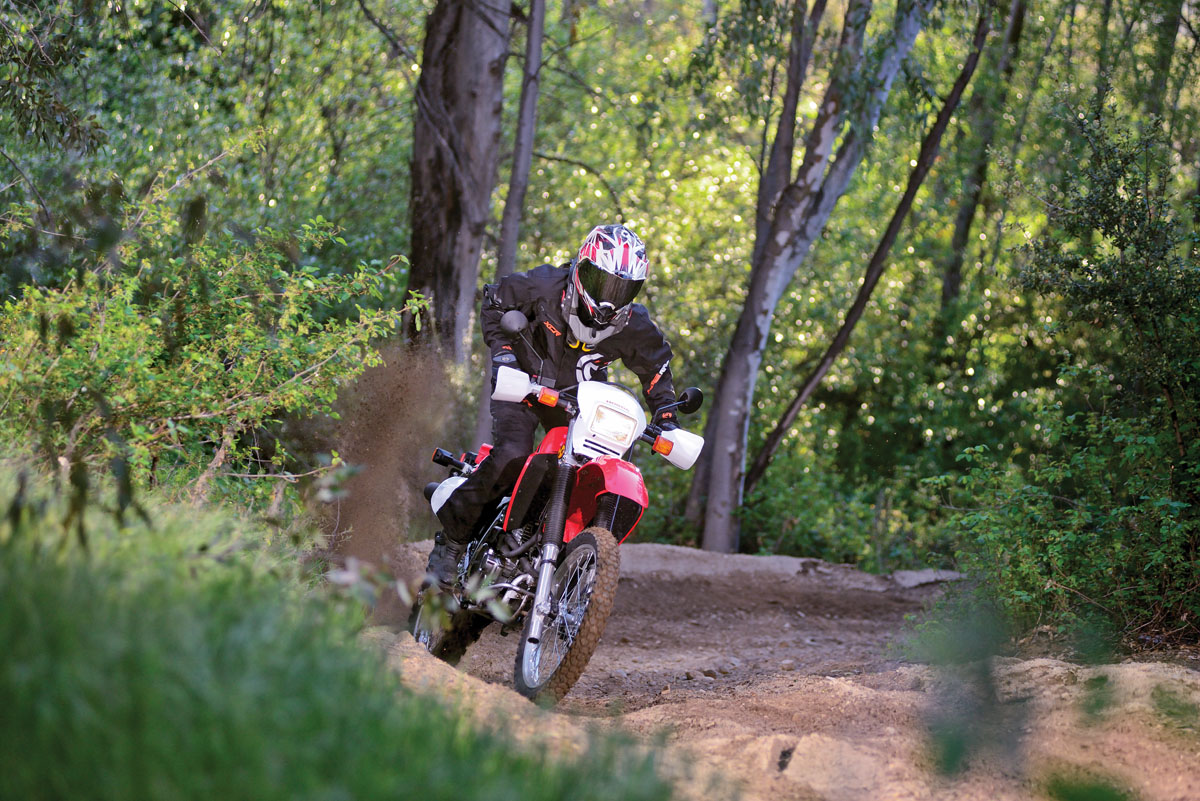 It’s taller than you remember. Honda gave the 650L stiffer springs than the 600R to handle the added weight of the electric starter and all the street stuff. Then, the shock was altered so it wouldn’t sink as much with a passenger. There’s also the seat, which is very comfortable but very wide, so your feet don’t go straight down. It all adds up to a bike that’s much taller than modern dirt bikes.
Yes, it’s heavy. If you didn’t know that for sure, you probably guessed as much. The XR is around 330 pounds. As with a fat woman wearing black, if you love her enough, you don’t notice. 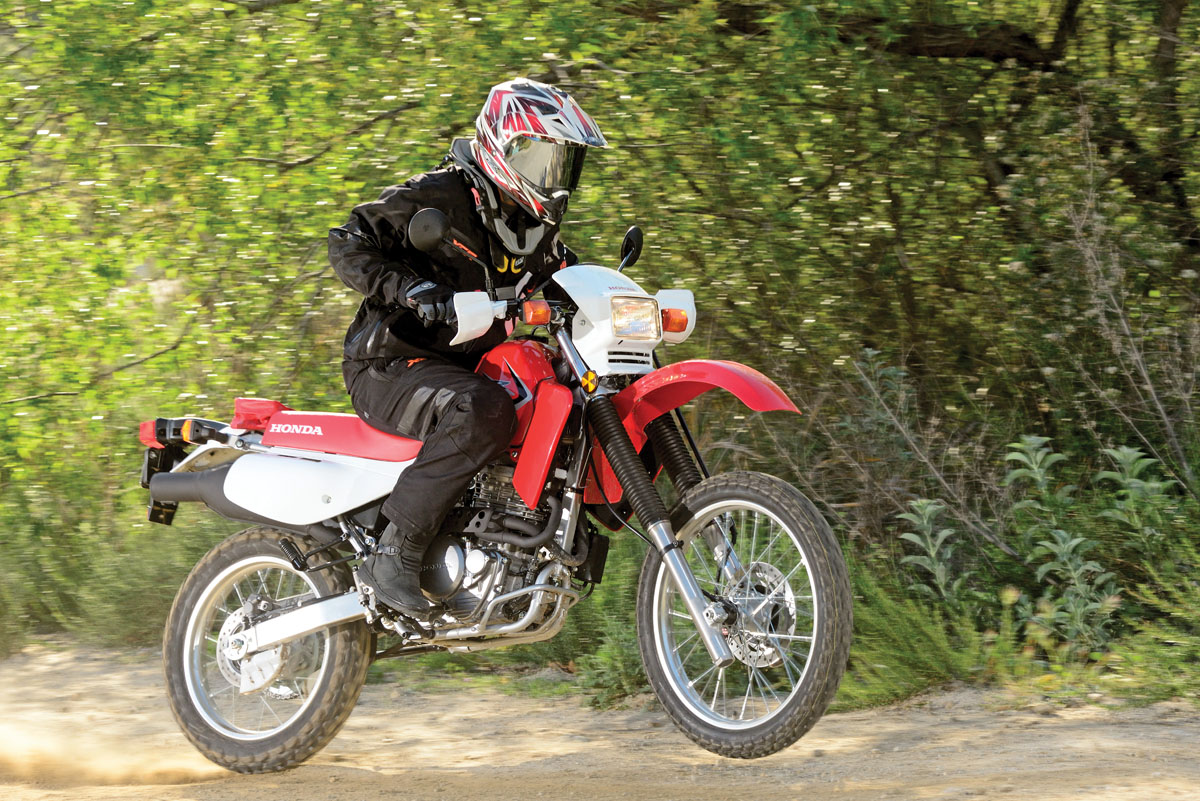 Lower gearing, dirt tires, new footpegs and a new handlebar will do wonders. If you want to ride in the dirt, the XR only needs those modifications. All dual-sport bikes benefit from knobbies; that much goes without saying. Most can use lower gearing. The ratio spread between gears didn’t change much in the conversion from dirt to street, but the overall gear ratio did. Adding four teeth to the rear sprocket helps in the dirt without making it terrible on the open road. And, that steel handlebar belongs in a museum. Not only is the material wonky, but the bend is a throwback to another time. In truth, we don’t think anyone liked it back then, either. And finally, those stock footpegs are like standing on pencils. Call IMS. 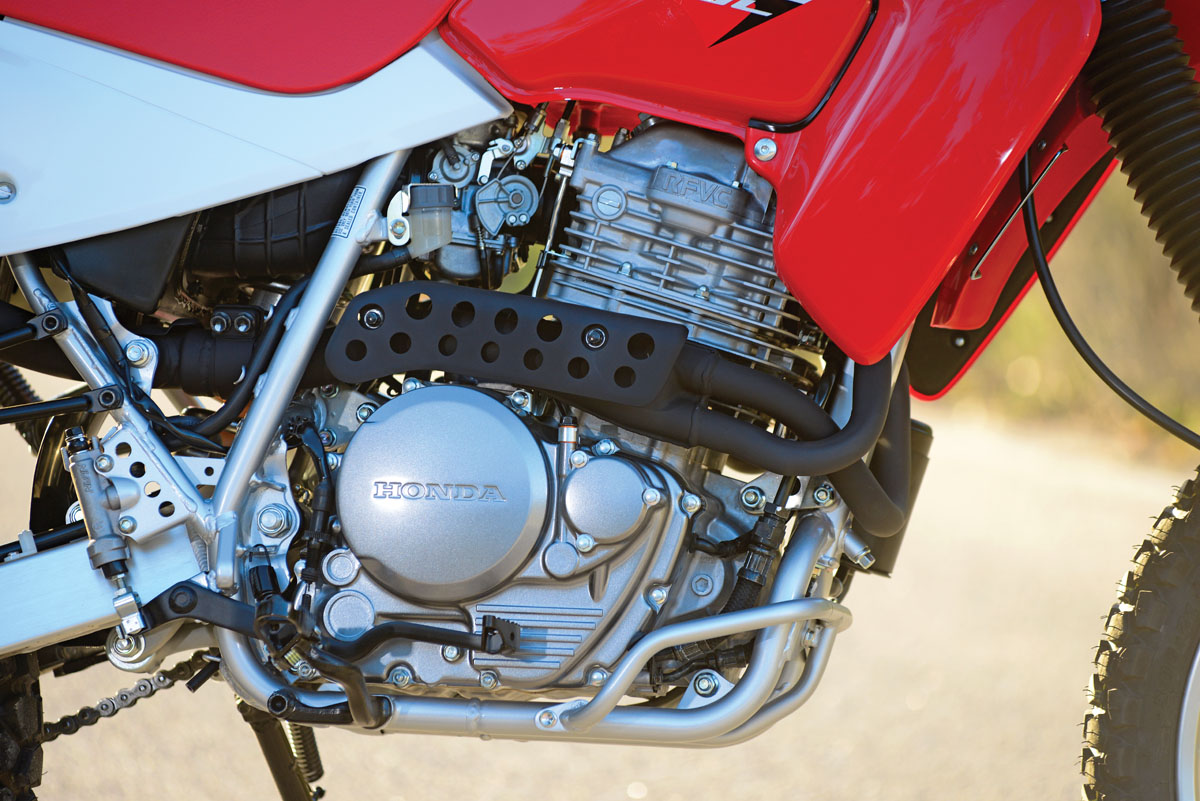 The range isn’t bad, but it’s not good. After all these years we still don’t understand why Honda didn’t give this bike a bigger fuel tank. It will squeak out 100 miles on the street with the stock 2.8-gallon tank, but that’s not enough if you’re riding with your buddies on KLR650s. Acerbis, IMS and Clarke all offer bigger tanks.
Stock motors aren’t bad. Back in the old days, Honda went a little crazy trying to keep up with the Team Green Kawasaki KX500s in Baja. The more they modified the XR, the less reliable it became. In stock form, the XR will never break, and the power is fine now that it doesn’t have to keep up with Larry Roeseler. Even the stock muffler is surprisingly good considering how quiet it is. If you do decide to hunt for a little more power, there are affordable solutions. An aftermarket exhaust should be teamed up with a few well-placed vents in the airbox and rejetting. Moose has a Stage 1 jetting kit that makes that last part easy. 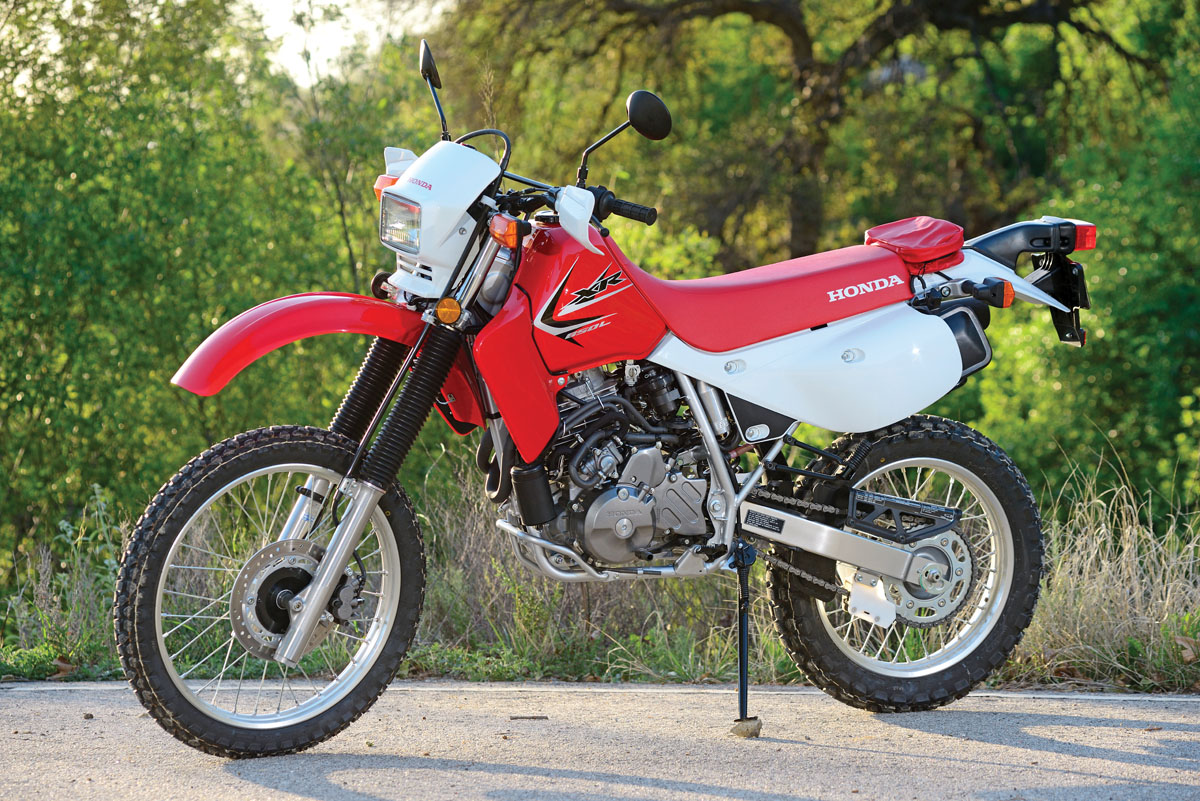 The price is amazing. Honda’s MSRP is $6690. The tooling for this bike has long since been paid for, and Honda is probably doing just fine with that price. That’s almost $4000 less than a contemporary dual-sport bike like the KTM 500EXC. Admittedly, the Honda can’t perform as well in the dirt, but by the same token, the KTM would be torturous on a 500-mile road trip. The XR is perfectly smooth and happy at freeway speed, and the vibration is at such a low frequency that it’s actually somewhat comforting. That’s probably the most important thing to know about the Honda XR650L. It’s available, inexpensive and still pretty good at what it does. It just so happens that “what it does” is everything.