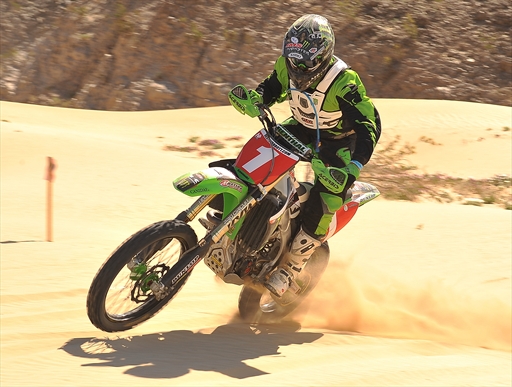 The race started just after 9:30 and we had two different loops. The first one was 60-miles (fast) and the other one was around 35-miles (sandy, rocky and more technical). When the banner dropped I finally got a first kick start. I wasn’t too confident on my line choice, but there really wasn’t anywhere else I could go after working with it. I kept it pinned, and when I got to the end of the bomb I was in 4th. Russ was leading, followed by David Pearson and David Kamo. About 5-miles in I was really trying hard to get by Kamo. I finally made a pass in one of the fast whoop sections. Then I closed in on David Pearson, but had to wait patiently where the dust was blowing off to the side (it was on the windy side). I kept looking past David to make sure Russ wasn’t checking out. At one point, I saw he had put a little time on David and that’s when I knew I needed to make the pass. I really charged in one of the sections where there were some drop offs, and made a clean pass on David. This first loop was really fast, but it was easy to key off the guy in front of you. That was my plan when I got into 2nd. I just wanted to make sure I had a chance, in the second loop, to win. I pretty much stayed just outside of the dust and rode smart. I would look back every now and then, and could see David doing the same thing to me. Coming into the main pit (after the 60-mile first loop) I was about 20-seconds back, and then David was about the same to me. I knew this loop wasn’t going to be as dusty, since a lot of it was in the dunes. Around the 10-mile mark, I finally got right on Russ and that’s when the battle startedJ. I followed him for a while and could never get by, and then I finally had my chance in a rocky section. I was in the lead, but it didn’t last long. Russ got back by and we seemed to keep doing this over and over. One time, while he was leading, I was trying to get by and we hit. I thought we were both going down, but luckily we both stayed on two wheels and I was back in the lead. Later I went back to second again and now David was on us. Now it turned into a three way battle and it was really fun, but I didn’t like being in the third position. Not to far after that, David lost his front end in some rocks and I was back in 2nd. Then I saw Russ had missed a turn in this ravine, and when he tried to go over it he went down. Now this was my chance! I had a gap on them and was going to try and see if I could check out, but then I stalled it going up this really cool rocky hill (which was pretty tough). I couldn’t get the bike started and I had to kick it a good 10 times before I got going. Just as I did, David was right on me again. A couple miles later, we came into a check and David was a few bikes lengths behind me. The guy marking my card must not have liked me, because he was taking his time while David had his card marked and was gone. As you could imagine, I wasn’t to happy to get passed at a check! I looked back and saw Russ was a ways back, and knew it might be a two-way battle now. We dropped out of the dunes about 7-miles from the finish, and it started to get dusty again. I was getting a little nervous, and knew my chances were starting to get slim if I was going to win. I just tried to stay as close as I could to wait for my chance to try and win it. Then I saw we had a few little dune sections, and some whooped out parts so I pinned it. I got right on him and went by in this rough section. We were both pushing it really hard and at this point I knew we were really close to the finish. After a mile, I looked back and saw I had a little gap. I just kept pushing it until I saw the checkered flag. David was about 25-seconds back and then it was Russ about the same distance from David.

As you could tell this was a pretty exciting race. Even when I wasn’t leading, on the second loop, I was thinking this is really cool that all three of us are this close. I felt I rode really smart and smooth today (never crashed) and was really happy to get the win. It honestly could have went to any one of us on the second loop. I have to say that was some of the coolest racing I’ve done with two other guys in quite a while. It was just back and forth and noone wanted to lose. Coming into the race I really put a lot of pressure on myself to win. I know if I want to win the title this year, I need to be pulling off some wins. If it wasn’t for a little bad luck the first two rounds I would be sitting pretty good, but that’s racing!

Last week I did an interview with the guys over at 2wheeltimes.com. Here’s a link to the interview https://site.2wheeltimes.com/Destry_Abbott_Interview.html. They have a pretty cool site and cover a lot of different type of motorcycle events.

Here’s a little video clip Beau did from the race. https://promoto.tv

Gary Sutherlin looked to have 5th place wrapped up, but with about 200 yards to go he hit something and went flying over the bars. He was in last gear and I heard it was a huge crash. When he landed he popped out his shoulder (dislocated it) and was in a lot of pain. The ambulance went out there to get him, but he was too close to the finish to give up. He asked them to start the bike and then he rode it across the finish line (he got passed by 2 riders when he was down). Not to long after that ,he passed out and then they took him to the hospital. I hung out with him at the hospital and drove him back home later that night. He’s a tough guy, but it looks like he’s going to be out for a little while and needs surgery. I hope he has a speedy recovery! I need my riding buddy back!

I just got my new Dirt Bike magazine that had the top 100 off-road racers in the US. I was pretty excited to see I was listed as 4th. They had Ricky Dietrich as the number one rider and I don’t think anyone can argue that one. It’s a great issue so make sure you check it out.

The club Roadrunners did a really good job on the second loop. The first loop was really fast, but this was the best second loop I’ve raced here before. It really allowed the three of us to race close to each the whole second loop. I have to give big props to the club this year! The course markings were a lot better and you could tell they put in a lot of hard work. After the race they even came and found me and wanted to know how they could make it better. Not to many clubs do that. Good job guys!

My next race is this weekends WORCS race in Lake Havasu. It’s going to be a hot and tough race, but it should be good.