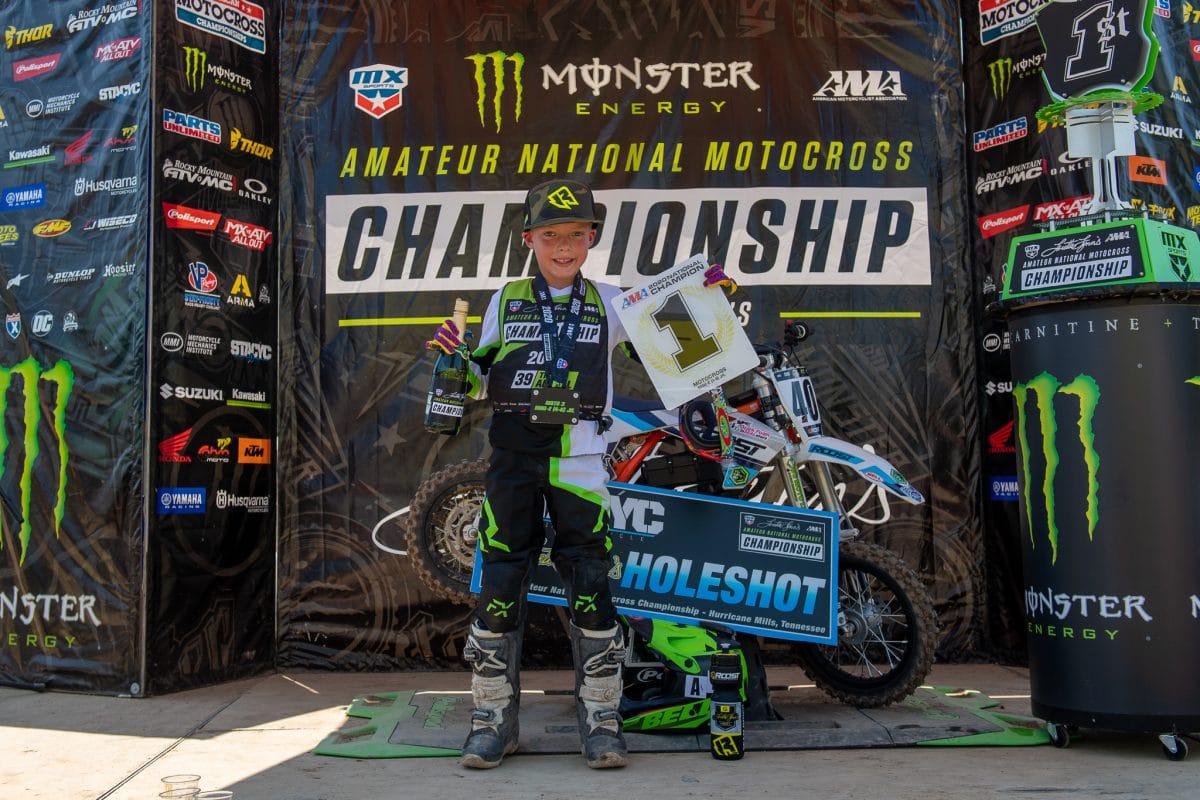 After winning four of his six motos, Rockstar Energy Husqvarna’s Stilez Robertson claimed this year’s coveted AMA Nicky Hayden Amateur Horizon Award based on his performance in the Pro Sport classes. Overall, Robertson went 2-1-1 to win the 250 Pro Sport class and 1-2-1 to win the Open Pro Sport division. Despite having four moto wins in six races, his most impressive performance may have been his runner-up finish in the second Open Pro Sport moto, working his way through a talented field after a poor start to end up two lengths short of Yamaha/Rock River/bLU cRU Amateur Motocross Team rider Mason Gonzales at the finish.

Both Robertson and Gonzales confirmed they will be competing in the Pro race at Loretta Lynn’s next weekend.

Another spectacular performance during the week came from Rock River Yamaha’s Levi Kitchen, who swept the 250 B Limited class, parlaying great starts into a 1-1-1 moto tally to beat out the 2-3-2 of KTM’s Daxton Bennick, who was second despite breaking his collarbone two weeks before the race, and the 4-2-5 of Monster Energy/Star/Yamaha Racing’s Matt Leblanc, Deep South Kawasaki’s Luca Marsalisi.

TLD Red Bull KTM’s Nate Thrasher ran away with the final moto of the 250 B class, but it was Monster Energy Star Racing Yamaha’s Matt LeBlanc who walked away with the title, turning a 1-2-5 into a Loretta Lynn’s championship. Thrasher ended the day in second overall with a 9-1-1 tally, and perhaps missed out on a national championship when he tangled with a lapper at the end of moto one. Meanwhile, Monster Energy Team Green Kawasaki’s Chance Hymas went 2-5-4 for third overall.

Second overall in the 125cc class went to KTM’s Gage Linville, with a 2-2-2, while third went to Rock River Yamaha’s Larry Reyes Jr with a 3-4-4 moto tally.

Second and third in the Schoolboy 1 (12-17) B/C went to Rockstar Energy Husqvarna’s Talon Hawkins and Reyes, respectively.

Haiden Deegan was another rider with a hot hand at Loretta Lynn’s. The KTM Orange Brigade rider swept all motos in both the Mini Sr. 1 and Mini Sr. 2 classes, going 6-0 to win a pair of titles. Deegan dominated the Mini Sr 2 class, winning the final moto by a 19-second margin over Monster Energy Kawasaki Team Green’s Krystian Janik and Triangle Cycles/bLU cRU/Yamaha’s Logan Best. Best finished the day in second, while Janik settled for third. Deegan offered up more of the same in the Mini Sr 1 class, taking the third and final moto on Friday by 18 seconds over Best. KTM’s Landin Pepperd was third.

Oklahoman Kade Nightingale turned in a 1-1-2 score on his KTM to win the first-ever title in the new division. Nightingale easily won the first two motos, but had to give way to Jaydin Smart, who won the third and final moto by a nine-second margin. Smart finished second overall with a 2-2-1 score, while Georgia’s Anderson Waldele was third on a KTM with a score of 7-3-3.

Other winners included Yamaha-mounted Brandon Scharer, who topped the Jonior 25+ division with a 2-1-1 finish; test rider Kris Keefer (Yam), who went 1-1-2 to claim the title in the Senior 40+ class; and OrangeBrigade KTM’s Luke Fauser, who squeezed the 85cc (10-12) championship out of a 2-3-2 moto tally.