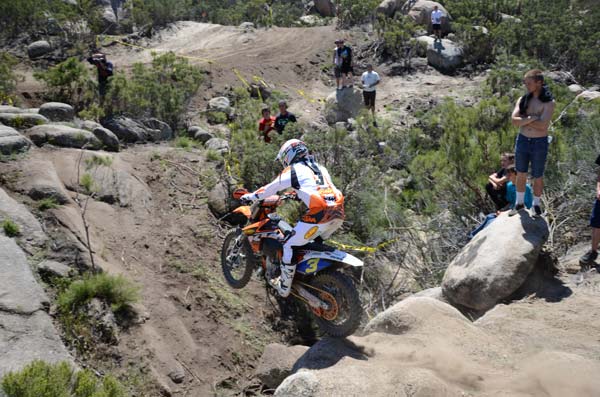 BROWN GOES 1/2 AT THE WORCS CAHUILLA CREEK ROUND

Mike Brown quietly stated, “I decided it’s time to start winning races,” before WORCS round four. Understand this – Mike doesn’t make predictions, boasts, or journeys of the imagination, so for him to make such a statement before a race should’ve had all who heard it running to the OTB to bet a house payment on the #3 KTM. A bundle would’ve been the return on investment, as Brown made good on his cause with a 1-3 performance for first overall at WORCS round four in Anza, California at the Cahuilla Creek MX Park.

It was a good weekend for the FMF/ KTM team as Brown’s teammate and defending WORCS Champion Kurt Caselli went 2-2 for the weekend for second overall. Kurt, as usual, was all grins and happy to see KTM go 1-2 in the event. “It’s always a good race when Mike and I go 1-2, for KTM” said Caselli. “But I’ll admit I enjoy it more when I’m the one with the first place finish and Mike is right behind me.”

Taking third overall with a 4-1 finish was the surprise entry of former WORCS Champion Ricky Dietrich. “I came out to train, test my speed, get ready for the nationals, and have some fun with my friends,” said Dietrich. “These WORCS boys like Kurt and Mike and Soule just get faster. I really had to step it up to win the second race and they were right on me the whole time.”

Dietrich took home the day two win. He used the WORCS round as a fitness prep for the Nationals

Fourth place fell to fan-favorite Justin Soule on the #4 Monster Energy Kawasaki with a 3-4 score. “I had to change my race plan,” said Soule. “I’m not happy getting fifth all the time. So I’m trying to relax and stay calm during the race, thinking more and riding with less emotion.” Soule’s performance was outstanding in race one where he was running fifth at the white flag and then cut the fastest lap of the race passing Dietrich and Garrison to take third by the checkered flag. He ran with the leaders the whole hour of race two and with some luck could’ve easily finished on the podium again. Look for Justin to take an overall win sometime this season. He has all the tools; he just needs the right track on the right weekend to put it together.

Bobby G was never a player, though he is tied with Caselli for the points lead

The WORCS Series point’s leaders, Bobby Garrison and Taylor Robert were both front runners at different times, but did not podium in either race one or two of round four. Garrison got the holeshot in race one and lead for a while, but eventually hit the endurance wall in the desert heat and finished fifth, Robert meanwhile rode hard, road fast and hit the ground often. “I just didn’t feel, right all weekend,” said Taylor. “I don’t know why, I just couldn’t find a comfortable pace.”

Another surprise on the starting line was former Suzuki Off Road factory rider Ryan Hughes, who had many WORCS victories to his credit during his career, but never clinched the Championship. Hughes rode a Honda during race one, showed blazing speed and crashed often. “I was having fun during the first ½ hour and thinking maybe I’ll come back for race two and try to get on the podium, but 15 minutes and three crashes later I decided one hour of this is enough.” Ryno eventually finished eighth in race one.

Ryan Hughes came out to play and ended up on his noggin’. An eighth place finish didn’t motivate him enough to race the second day.

Of the fans who lined the course, the favorite spot was the Pro section, known as the “Gorge” where the riders had to jump a deep ravine by ollying off a rocky cliff. Visually stunning, it was great for spectators and extremely tough for even the best riders.

Brown’s victory will move him up in the points chase and with six rounds to go, the title is turning into a horse race between Garrison, Robert, Caselli, and Brown.

Don’t miss round five May 27-29 in Clay Peaks Payette, Idaho.