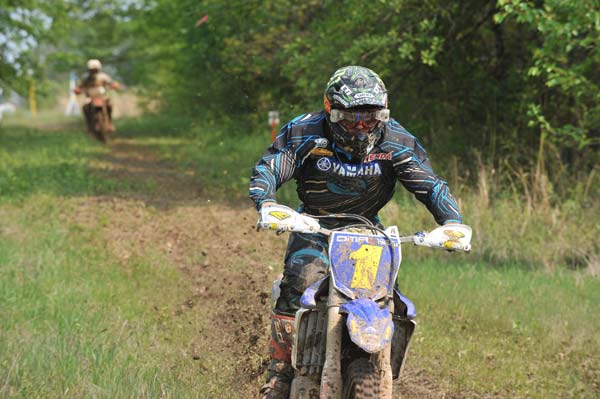 After finishing a close second at round one, three-time and defending series champion Paul Whibley sped to victory at round two of the Parts Unlimited Off-road Motorcycle and ATV Nationals, the Spider Grafix River Front Grand Prix in Barling, Arkansas, on April 17. He didn’t have an easy time of it, though, as four-time champ Jimmy Jarrett kept him honest all afternoon before getting stuck in a rut and settling for second. Jordan Ashburn came from a last-place start to claim third.

Jarrett hung tough for most of the race until sticking it in a mud hole. He took home second.

AmPro/FMF Yamaha’s Whibley trailed at the start, following only privateer Shane Klimek who bagged the $200 FMF Holeshot Award, but he quickly made his way to the front followed by GEICO Powersports/American Honda/JG Offroad’s Jarrett. Those two spent the next two-plus hours glued to each other with Whibley doing most of the leading.
“It was a pretty fun race,” Whibley said. “It was almost like a fun trail ride.”
But they put the fun aside and went to work in the last half. “Before the fuel stop or about the fuel stop, we got a pit board saying Jordan wasn’t too far behind us so I guess we both got the same message so we both picked it up a little bit. After the gas stop, it became a race.”
Ultimately, Whibley would win it by a minute and a half–the biggest gap of the race–with Obermeyer/AmPro Yamaha’s Ashburn third for the second round in a row. Klimek rode strongly to claim fourth with Mid-South Motoplex/Barry Heath Racing KX250F-mounted Michael Williams fifth. Overall A and 40-49 A winner Matt Stavish rode to sixth overall followed by Lite A winner Nate Ferderer, with Arkansas local Parker Nolen, Lite A runner-up Daniel Janus and Open A winner Cody Bollinger rounding out the top 10.
-30-