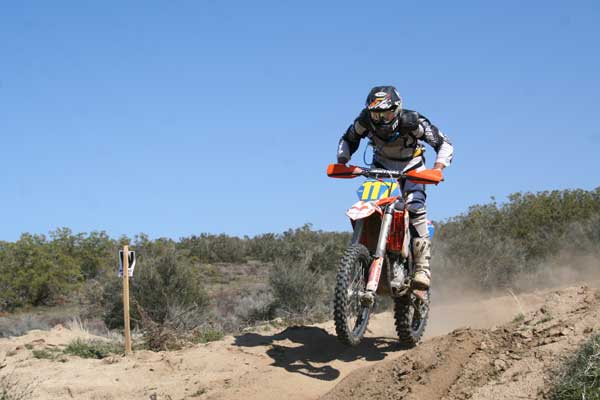 Brenden Ritzman
KTM mounted Brenden Ritzman took on all challengers, including a late race charge from Kyle Summers to win the opening round of the AMA Western Hare Scrambles Series at Rynoland in Anza, California.
Defending WHS Champion Brian Garahan got the holeshot and took the lead for a short time. But he was quickly displaced at the front of the field by Monster Energy Kawasaki’s Ricky Dietrich. Dietrich established himself as the front runner and quickly gapped the pack that included Garahan, Ritzman, KTM’s Justin Soule, JCR Honda’s Tim Weigand, Nick Brozovich, and Kendall Norman, Robby Bell, Ryan Orr, and Valli Motorsports’ Kyle Summers.

Ricky Dietrich
Dietrich, as usual when he gets out front, looked unstoppable and pulled a lead of more then a minute before the first hour was up. Bell charged through to second and Ritzman was putting in a great ride and moved into third just in front of Weigand. The order would remain the same going into the second hour. Then the pit stops began; Dietrich continued to lead, Ritzman moved into second and Bell dropped back.
At the two hour mark Dietrich’s motor started making ominous noises and he visibly slowed down. Ritzman quickly closed the gap and began to pressure the popping Kawasaki. Then, two hours and ten minutes into the race, Ritzman motored by Dietrich and took the lead. Meanwhile Summers put on a charge that moved him into third ahead of Weigand. Then, at two hours and thirty minutes into the race, Dietrich pulled off the course and rode/pushed his sputtering 450 to his truck, deeply disappointed at seeing another National win evade him due to a mechanical problem.
Now the battle was on between Ritzman and the charging Summers. Ritzman held a two second gap over Summers for most of the last 30 minutes of the race. Though Summers tried to close and pass, it was Riztman’s day and he would not be denied.

LAFFERTY IS BACK AND DOMINATES AT THE ALLIGATOR!