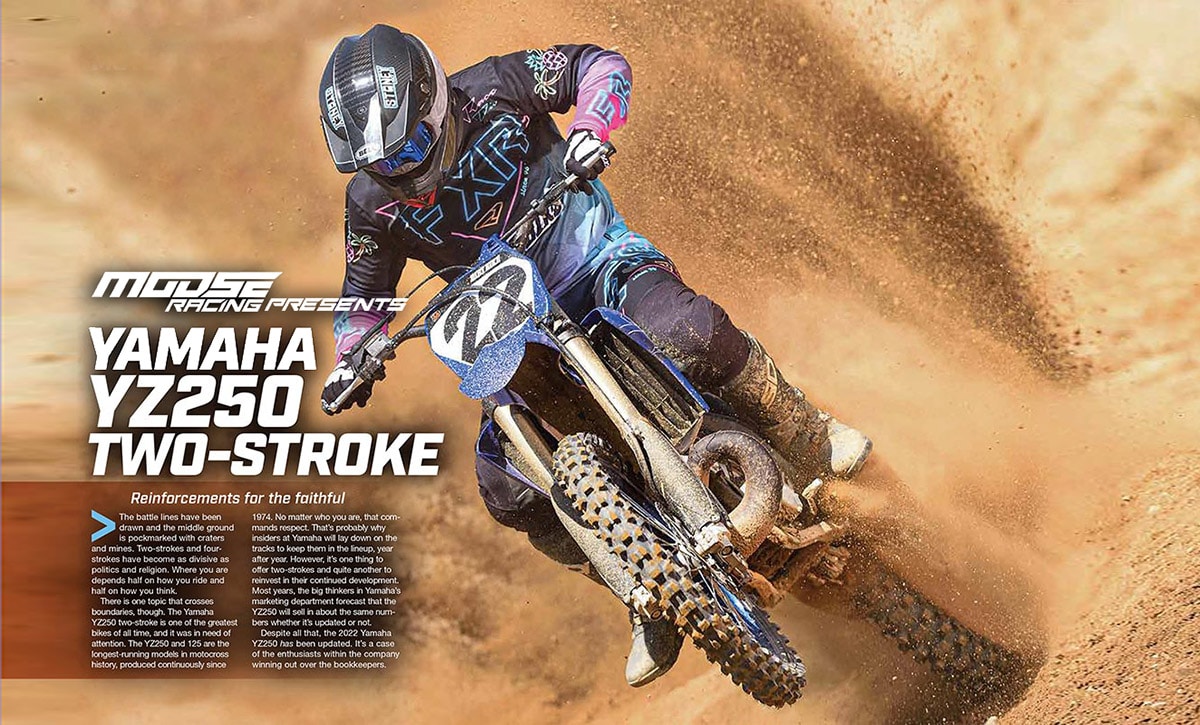 The battle lines have been drawn and the middle ground is pockmarked with craters and mines. Two-strokes and four-strokes have become as divisive as politics and religion. Where you are depends half on how you ride and half on how you think.

There is one topic that crosses boundaries, though. The Yamaha YZ250 two-stroke is one of the greatest bikes of all time, and it was in need of attention. The YZ250 and 125 are the longest-running models in motocross history, produced continuously since 1974. No matter who you are, that commands respect. That’s probably why insiders at Yamaha will lay down on the tracks to keep them in the lineup, year after year. However, it’s one thing to offer two-strokes and quite another to reinvest in their continued development. Most years, the big thinkers in Yamaha’s marketing department forecast that the YZ250 will sell in about the same numbers whether it’s updated or not.

Despite all that, the 2022 Yamaha YZ250 has been updated. It’s a case of the enthusiasts within the company winning out over the bookkeepers. 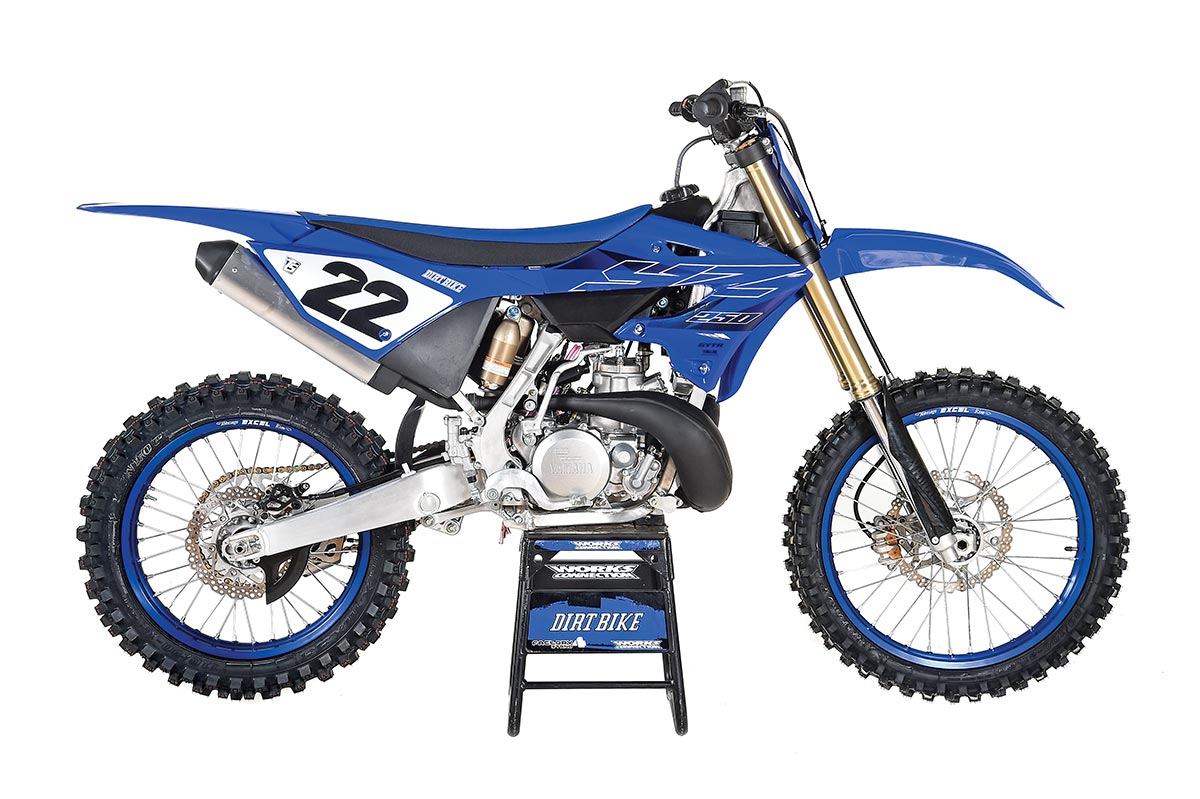 TIME AND SPACE
Somewhere in space, there’s a planet 17 light years away that’s looking at earth with a super telescope. They’re thinking, “Hey, that 2005 YZ250 sure is state of the art. Look at the aluminum frame, the power-jet carb and the KYB suspension.” Those of us a little closer understand that the ’05 YZ was the last big investment that Japan would ever make in the two-stroke. Even then, the YZ motor had been unchanged since 2003, but the chassis was brought up to date with the latest technology in the motocross world. From that point forward, only parts, components and bodywork would change. The fork and the brakes have had a number of changes, but a big cosmetic remake didn’t come until 2015. 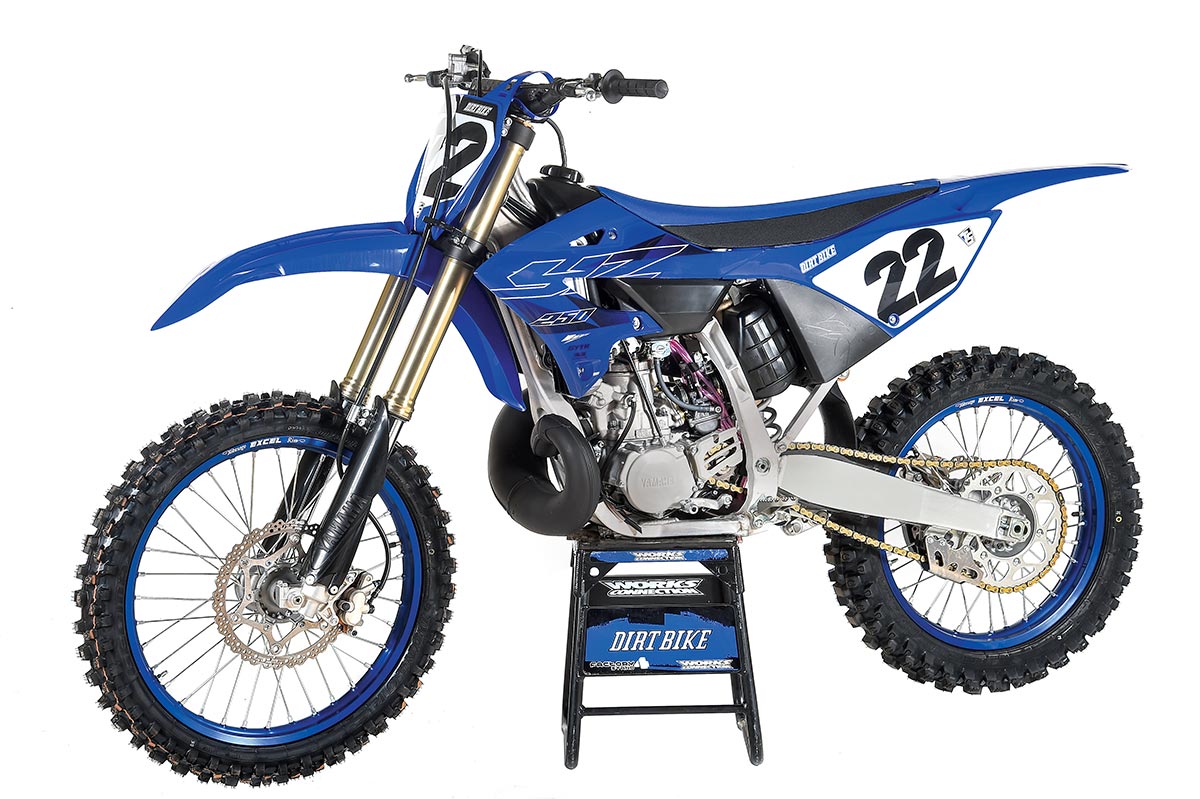 There are more changes in 2022 than there have been in any one year since 2005. The most obvious is the bodywork. The shrouds, fuel tank and seat were redesigned to make the seating position more level—from front to rear—with smoother transitions and a narrower width in the knee-grip area. The seat height is slightly taller in the middle but lower in front. Along the way, the fuel tank lost about a quart, now measuring 1.85 gallons. The entire subframe is different, as well as the airbox. Yamaha says that airflow resistance has decreased by 15 percent. The air boot between the carb and the airbox has not changed. In the suspension department, Yamaha is saying that most of the fork has been updated to the same pieces as the current YZ250F four-stroke. The axle carriers are obviously different from the F’s to accommodate a smaller axle, and the valving is completely different. The spring rate is slightly heavier compared to last year’s YZ250 two-stroke—from 4.3 N/m to 4.4. The shock has always been completely different from the four-stroke’s but has been updated with new valving and a heavier spring rate (50 N/m versus 48).

The brakes were next on the hit list. The front brake has a new caliper with larger pistons and increased rigidity. It got new pads with 29.2 percent more surface area. Even though the rotor is still 270mm in diameter, it is configured with an increase in surface area. In the rear, the caliper is smaller and lighter, and the rotor diameter was reduced from 245mm to 240. The chain and sprockets lost a little weight, and the tires were updated to Dunlop MX33s.

THE MORE THINGS CHANGE…
The term “all new” gets thrown around often. It doesn’t apply here. The 2022 Yamaha YZ250 is new enough, but it’s still a YZ250. When you look at the bike, it gives off a more modern vibe, and when you ride it, you can notice a change in the ergos, but only if you have ridden an older YZ back to back. If you’re a YZ250 lover, that’s nothing but good news. The bike is very distinctive and is an absolute blast to ride in the right conditions.

There’s no real difference in weight; the new bike still weighs 217 pounds, which is about 10 pounds lighter than the Yamaha YZ250F four-stroke. Beyond the actual number, the two-stroke has a very agile feel. As is often pointed out, two-stroke motors have less rotating mass, which means they have less of a gyroscopic tendency to hold their position in space. Translated, that means you can toss it around more easily. The YZ still isn’t the best-cornering bike on the track, but that has more to do with power delivery. By modern standards, the YZ has a very hard hit. It takes a skilled approach to roll on the power just the right amount as you initiate your turn. This isn’t anything new to two-stroke riders, but if you’re transitioning back to a YZ250 after spending time on a four-stroke, you’ll have to relearn the magic touch. The YZ250 has a harder hit than even a KTM 250SX, which ramps up earlier, has a wider powerband and revs higher.

Whether or not the 2022 YZ250 runs any differently because of its new airbox is debatable. The jetting is unchanged, and the bike’s manners are the same as always. It’s super clean down low and has only a hint of detonation under a load. That’s the way it’s always been; you would think that if airflow were significantly different, the detonation might actually be more pronounced. It’s not. Some riders mix in a little race fuel, but it’s not necessary unless you install an aftermarket pipe. 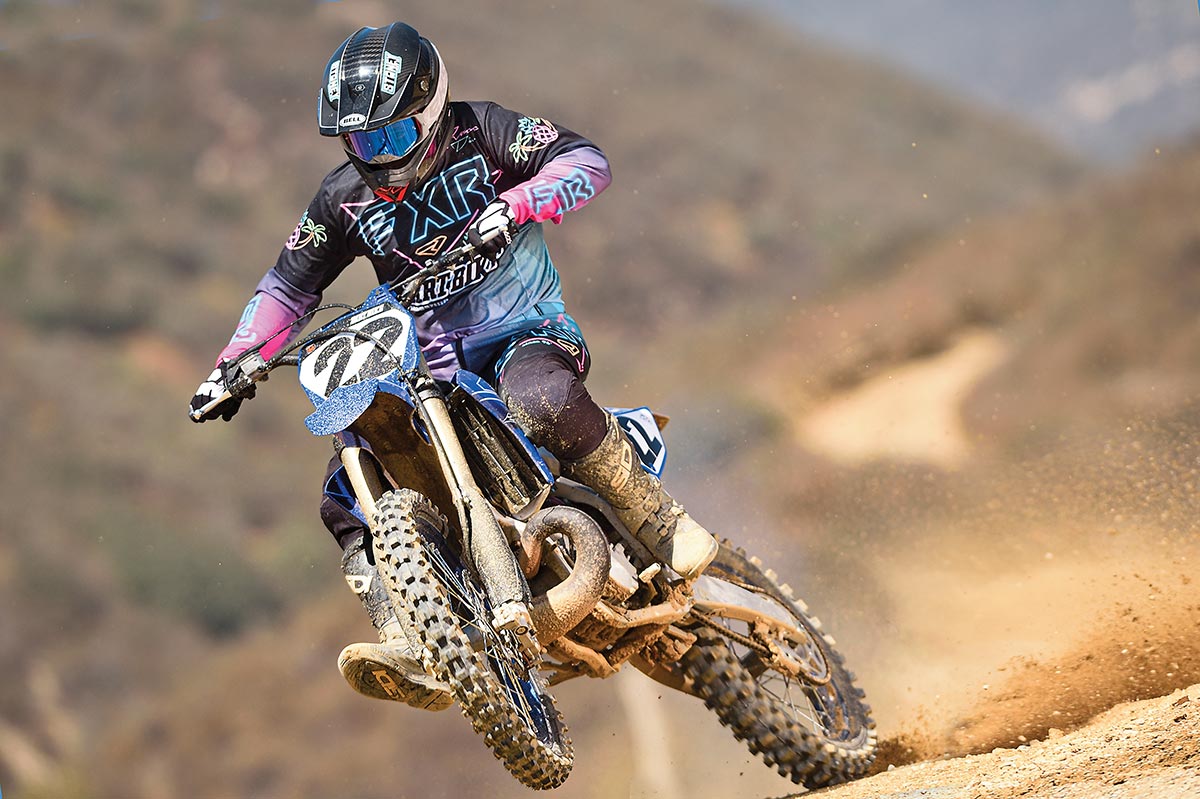 BACK TO THE FRONT
The real question is unchanged. It isn’t about the old YZ250 versus the new one. It’s about asking yourself if you’re a two-stroke man or not. For racing, there’s only a small window of conditions where a YZ250 has an advantage over a four-stroke. If you can custom-order a track with loamy dirt, excellent traction and smooth jump faces, a YZ250 is in its element. There’s no bike that’s as much fun and effective. Unfortunately, perfect conditions like that don’t last long. As soon as the track dries out and the jumps get hooked and rutted, the YZ250 is more demanding. The suspension components might be the same as those of a Yamaha four-stroke, but on a rough track, the four-stroke will work much better. Maybe it’s those gyroscopic forces again, but a typical 450 four-stroke will go faster and straighter and get better traction. The debate gets more interesting if you’re comparing a YZ250 to a YZ250F. There, the 250 four-stroke will have an advantage in the rough stuff, but the YZ250 will have a horsepower advantage. If you can find the traction, you will eat any 250F alive.

None of these facts are new, and none will be the deciding factor in anyone’s decision to go two-stroke. In the big picture, nothing has really changed, and the new YZ250 maintains its place in space. It’s a fun bike with excellent power and the best suspension in the two-stroke world. Now, it does that a little more style.