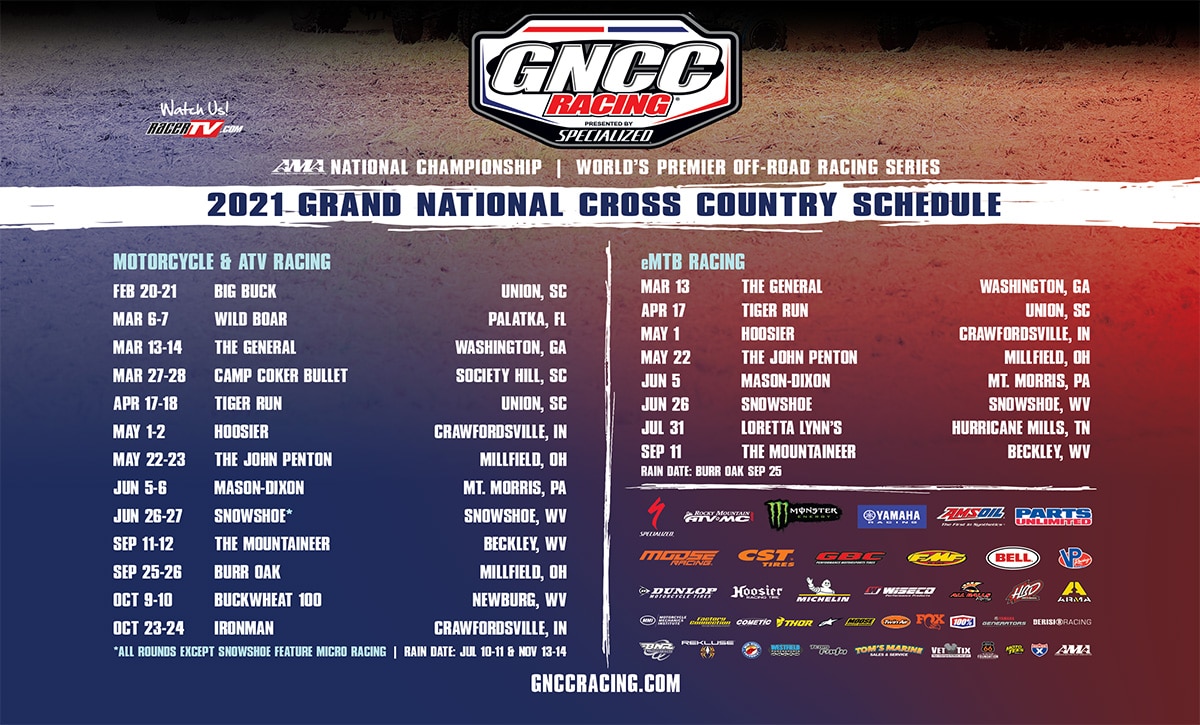 Racer Productions, producer of the Grand National Cross Country (GNCC) Series presented by Specialized, an AMA National Championship, is pleased to announce the series schedule for the upcoming 2021 season.

The GNCC Series is set to kick off on February 20 and 21 with the Big Buck GNCC in Union, South Carolina. From there the series will head south for the 7th Annual Wild Boar GNCC in Palatka, Florida, which is also held in conjunction with the 2021 Daytona Beach “Bike Week” festivities on March 7 and 8. Then the next weekend, March 13 and 14, the series continues in Washington, Georgia for a back-to-back round with The General GNCC at Aonia Pass Motocross.

“We’re excited to get the 2021 GNCC Racing season off and rolling,” said GNCC Trail Boss, Jeff Russell. “We have a lot of really great facilities that have hosted some amazing events in the past, and we’re ready to see another season full of excellent racing on some great racecourses.”

Moving onto round four of the season, the series will head to Society Hill, South Carolina for the Camp Coker Bullet GNCC on March 27 and 28. Then after a two-week hiatus the series will once again return to Union, South Carolina on April 17 and 18 for the Tiger Run GNCC at Big Buck Farm. Kicking off the month of May will be the Hoosier GNCC in Crawfordsville, Indiana at Ironman Raceway for the first of two GNCC’s to be held on that property.

Returning to the series schedule as one of the oldest GNCC events on the circuit will be the 33rd John Penton GNCC held in Millfield, Ohio on May 22 and 23, followed by the Mason-Dixon GNCC held in Mt. Morris, Pennsylvania on June 5-6. The series will also make its return to Snowshoe Mountain for the 14th Annual Snowshoe GNCC event on June 26 and 27.

“The 2021 GNCC schedule is a little different than what we’re used to, but still promises to make for an amazing season,” agreed GNCC Jr. Trail Bosses, Jared Bolton and Ryan Echols. “Some racers might be concerned with visiting some of the venues more than once in a season, but after doing so in 2020 we learned that our crew is creative enough to change up the second event enough that it feels like a totally different facility.”

After the summer break, the series will return to Summit Bechtel Reserve for round 10 on September 11-12. The Mountaineer GNCC continues to be a popular addition to the series schedule. Located in the heart of southern West Virginia, the race is hosted at the spectacular 11,000-acre home of the National Scout Jamboree. Round 11 will be held in Millfield, Ohio for the Burr Oak GNCC, with the penultimate round of racing being hosted at the Buckwheat 100 in Newburg, West Virginia on October 9 and 10. Ironman in Crawfordsville, Indiana, will make its return to host the GNCC season finale race on October 23 and 24.

The 2021 schedule welcomes back many of its most seasoned venues, including Big Buck in Union, South Carolina; The General in Washington, Georgia; The John Penton in Millfield, Ohio; West Virginia’s popular Snowshoe GNCC in Snowshoe, West Virginia; and the Ironman finale in Crawfordsville, Indiana.

Two rain date have been set for the 2021 season for the weekends of July 11 and 12 and November 13 and 14, with locations to be announced at a later date, if needed.

Returning to the schedule on Saturday afternoons will be the eight-round Specialized Turbo eMTB GNCC National Championship. The first round will be held at The General GNCC on March 13. Tiger Run in Union, South Carolina will host round two, followed by the Hoosier and The John Penton GNCC’s in Indiana and Ohio. Mason-Dixon will host round five of the eMTB National Championship on June 5. Round 6 will take place at Snowshoe in West Virginia, with round 7 being hosted at Loretta Lynn Ranch in Hurricane Mills, Tennessee on Saturday July 31 as a one-off event held in conjunction with the AMA Amateur National Motocross Championship.

The eMTB schedule will pick back up after summer break with the eMTB season finale race on Saturday, September 11 at the Mountaineer GNCC in West Virginia. The Burr Oak GNCC will serve as a rain date round for eMTB racers in the event an eMTB race should be cancelled earlier in the season.