In the beginning, Supercross was a distinctly America form of racing. Europeans came and went without making a lasting impact. That changed in the ’90s. In the August, 1998 issue of Dirt Bike, Roger DeCoster wrote about a new wave of Europeans who came to the U.S. with new style, new attitude and new speed.

Is there a Euro invasion in motocross? Some people are talking about it. First Sebastien Tortelli wins the opening supercross of the year, now Mickael Pichon wins the outdoor opener. Last year it was South African Greg Albertyn who won the first race of the year.
In truth, the Europeans aren’t invading. They have always been here. It’s just that in the early ’80s, the influence of Europeans in supercross was non-existent. Their riders were pretty much restricted to U.S. GPs, where they had some success. In the 250 class, Kees Van der Ven, Georges Jobe and Yves DeMaria all won races. Eric Geboers won the 500 USGP, and then Jean-Michel Bayle won the last two in a row. As far as U.S. Nationals and supercrosses, there really was no European influence throughout most of the ’80s.
In the ’90s, though, it’s been a different story. A half-dozen or so riders have come over here and not only won races, but actually had a measurable impact on American riding styles.

Jean-Michel Bayle. Of course, any discussion of Frenchmen in America has to begin with Bayle. He came here, took a little while to learn the game, then completely mastered it. After that, he infuriated fans by walking away, as if he had nothing more to prove in the sport of motocross. Bayle participated in the first eight supercross rounds of ’89 before returning to the GP circuit and winning the 250 title that year. In those first few months in the U.S. he didn’t win any Supercrosses, but he did win the first outdoor National he ever entered, at Gainesville. So ’90 was his first full year over here. He was to ride the 250 Supercrosses and the 125 outdoors. In the stadium races he didn’t dominate immediately,though. He got second in the opening round, but it took him eight tries to win a main event. Then came the 125 outdoors, where he began to take control from the third round on. He looked like a sure bet to win the title until he broke his arm at Washougal. He had to sit out the rest of the season, but still finished fourth in the standings with four wins.
Then, of course, came the most successful year of his career. It might even be the most successful year of any rider’s career. In ’91, JMB won all three titles: he was Supercross Champion, 250 Champion and 500 Champion. That had never been done before in the U.S. Certainly it will never be done again, since there is no more 500 class. Jeff Ward is the only rider to have won all three titles plus a 125 championship, but he earned them in different years.
After that, JMB lost interest. He still won three supercrosses and a 250 national in ’92, but his mind was clearly elsewhere. Soon, he would leave the U.S. and his motocross career to try his hand in road racing.
In the end, Bayle would be remembered as one of the smoothest riders in the history of the sport. He was faster in stadium whoops than anyone before or since, and even today, riders are still trying to imitate some of his natural grace.

Greg Albertyn. Although not exactly a European, Greg is a product of the GP circuit. The South African had won a 125 and a couple of 250 World Championships when he arrived in the U.S. His only supercross experience was in European events, but that wasn’t enough to prepare him for the American version. In his first season he managed only four top-ten finishes, his best being a fourth in Las Vegas. Still, he finished 12th at the end of the series, which wasn’t bad. In the outdoors, no one knew what to expect from Greg. He could take it all or sink into the pack; there was no way to predict. In his first heat of his first National, he was second, but a broken wheel in the second moto took him out of the race–he wouldn’t join JMB in the first-try/first-win club. After that, he finished on the podium three times before an injury took him out for the rest of the year. That pattern had become familiar.
The next year, he had one injury after another, but at least started making the podium in Supercross. By the time the outdoors started he was healthier and won his first races: a moto at Mt. Morris and an overall at Unadilla. nothing was coming as easily for Greg as it had for Bayle, though. He finished the season fourth.
When he won the season opener at Los Angeles last year, I have to admit it was quite a shocker. It was his best stadium ride ever, leading from start to finish with hardly a bobble anywhere. He ended up that season in fifth. Now that Greg is in his fourth year here, has he had an impact on American riders? He’s definitely made an impact on a lot of American tracks. Seriously, his dedication is impressive. Greg never gives up, and the smartest riders look up to him for that.

Mickael Pichon. He hasn’t come to America with the splash of either a Bayle or an Albertyn, probably because he hadn’t won any world championships beforehand. He came up through the French Supercross program, one of a new breed of European-bred Supercross stars. Mickael is a natural talent like Bayle, and there’s no telling what he will do as he matures. He rode his first American 125 supercross in ’93 at Anaheim, and actually won at San Diego that year (his third try). Then he won the 125 east titles in ‘95 and ’96. He had never won an overall in the 125 class outdoors, though, driving home the perception that he is a supercross-only rider. That all changed at Glen Helen, when he duplicated JMB’s feat of winning his first attempt at a 250 National. Pichon’s influence on the American scene can’t yet be measured; at this point his career can go in any direction.
David Vuillemin. Another product of the French Supercross program, Vuillemin is a talented young rider with good work ethics. Last year was his first in the U.S. He won a 125 Supercross in Seattle (his fourth American race) and went on to finish fourth in the series despite leaving early for the GPs. His contribution to the American scene came this year, when he made John Dowd battle for every point in the 125 West title. He and countryman Stephane Roncada kept the western 125 races from being a one-rider show–in many cases it was a more exciting race than the 250 class.

Sebastien Tortelli. Tortelli has been training in America during the winter for several seasons. His personal coach, Jacky Vimond, is a past 250 World Champion who learned the benefits of wintertime training in the U.S. before winning his title in ’85. Tortelli raced a couple of American supercrosses in ’97 with good results. Yet no one expected his come-from-behind victory at Los Angeles this year. He passed Doug Henry on the very last lap; many spectators actually thought he was a lapper!
Tortelli’s win served as a wake-up call for American riders. From now on, they have to take riders from all over the world seriously. Supercross isn’t strictly an American sport anymore. Call it a case of growing pains. 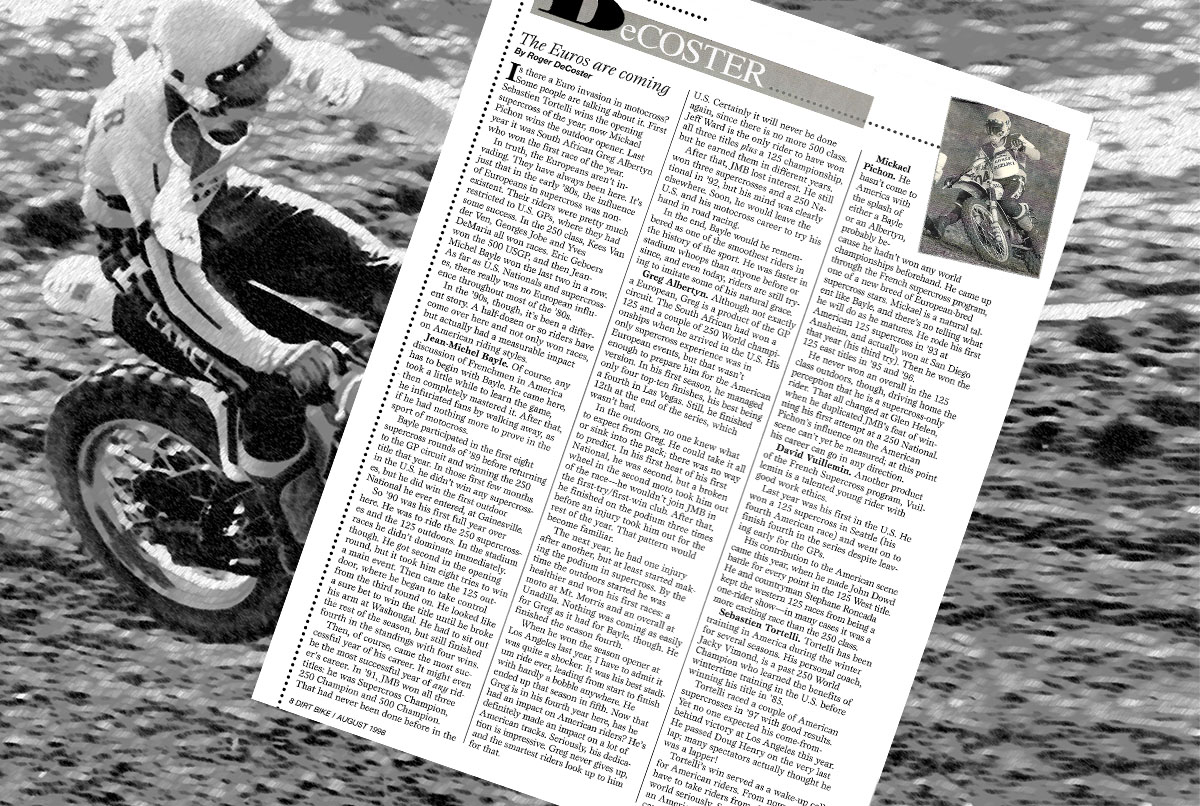