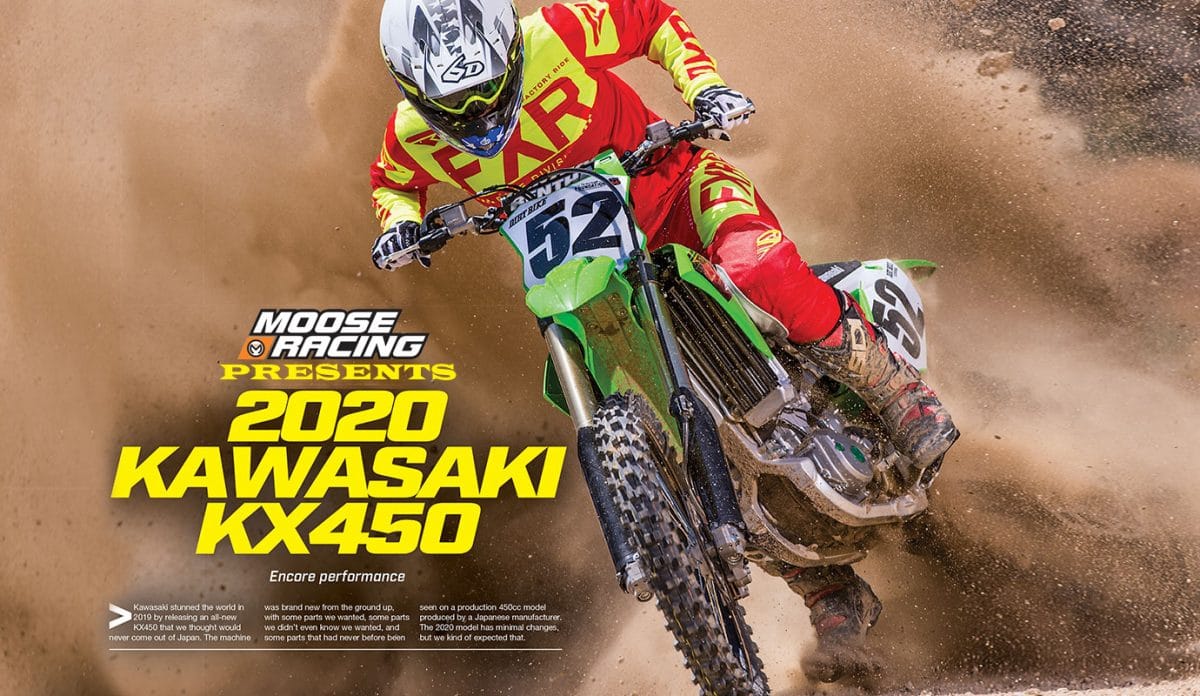 The 2019 Kawasaki KX450 was brand new from the ground up, with some parts we wanted, some parts we didn’t even know we wanted, and some parts that had never before been seen on a production 450cc model produced by a Japanese manufacturer. The 2020 model has minimal changes, but we kind of expected that.

BACK AGAIN
When a manufacturer releases a machine with huge changes, they usually spend the next couple years refining those changes. Kawasaki has again gone against the status quo, releasing the 2020 KX450 with only cosmetic changes and leaving everything else exactly the same. We can’t really blame the engineers for taking a year off.

The new KX returns with the same chassis design that saved weight and featured a slimmer design than the previous model year. Because cast items are usually heavier than extruded items, Kawasaki decreased the number of cast parts in the swingarm and increased the number of extruded parts, thus reducing the overall weight by almost 2 pounds. One change universally accepted by the masses was the return to a coil spring. And Kawasaki’s engineers didn’t just throw on the single-spring version that had adorned the KX250 in years past. Kawasaki went all out, using a 49mm Showa setup with springs and the A-Kit technology borrowed from the racing department. Now this is not the exact A-Kit fork used by Eli Tomac, but it does have some of the same features, such as the titanium nitride coating on the inner tubes, the Kashima coating on internal parts and an oversized piston. Kawasaki also gave parts of this fork what it calls a “Dimplish” finish, which is a texture that retains oil. The only negative of a coil-spring fork versus the Showa Triple Air version on previous models is weight. Springs are heavier than air, and there is nothing that can be done about that. In the rear, the Kawasaki 2020 KX450 uses a Showa shock that features a compact design that also has A-Kit technology with a larger-diameter compression adjuster used in conjunction with Kawasaki’s patented Uni-Track linkage. 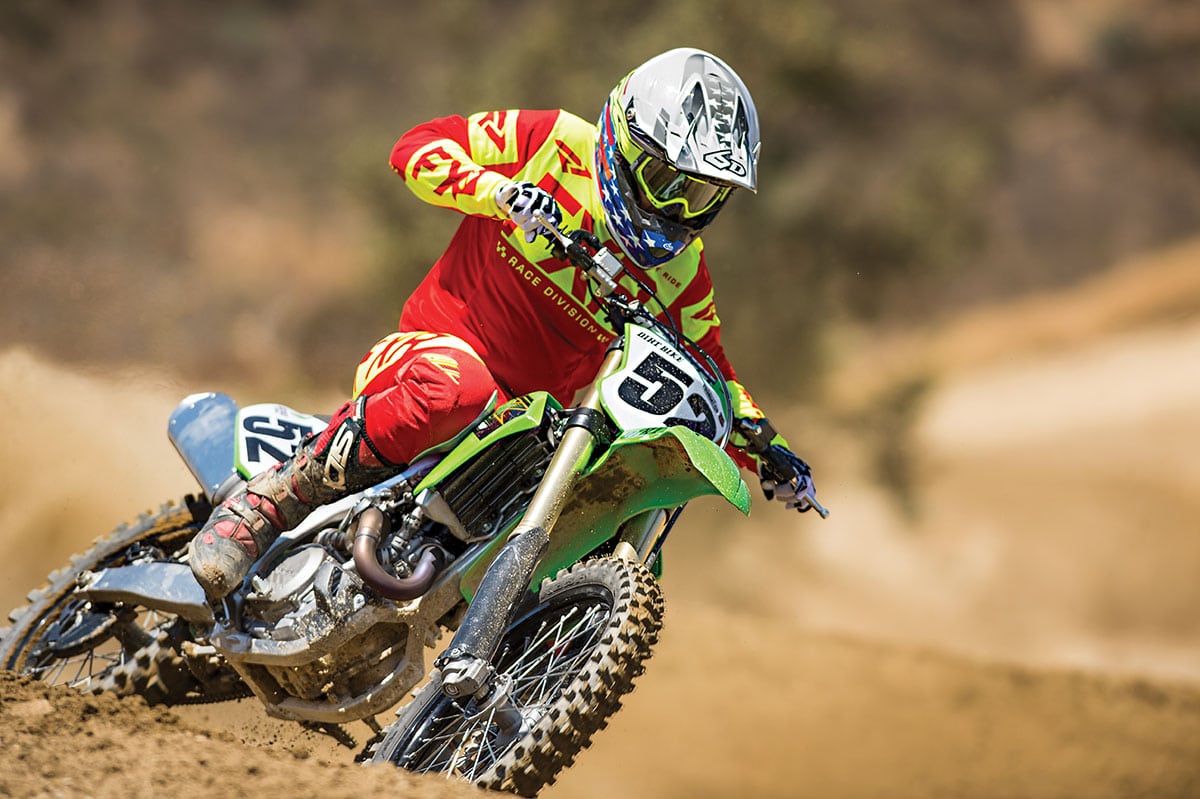 Other items worth talking about on the chassis include the redesigned air box that features side access via the left-side number plate. Gone are the days of taking off the seat and feeling around with your hands in a black hole to change the air filter and inevitably getting dirt in the intake boot when pulling the old filter out. The brakes got some upgrades last year as well via a new master cylinder in front and a larger 250mm rotor in the rear, making it the largest rear rotor ever on a production 450cc machine. Adjustability is still a big part of the KX450, with multiple adjustment capabilities on the top triple clamp for handlebar position, and it is the only bike in the class that offers two different peg-position options. Kawasaki does have us scratching our heads with the 7/8-inch handlebars. They must have a huge stockpile.

With the introduction of an electric start in 2019, Kawasaki engineers had to redesign the entire engine, and the one thing that surprised us most was the addition of a hydraulic clutch. We have seen them on other Japanese manufacturers’ factory bikes for about five years now, but never on a Kawasaki. We assumed the possibility of them ever making it to production was slim. Not so. Kawasaki uses a Nissin-manufactured unit. Other major changes to the DOHC powerplant include a finger-follower valve train that we have seen other manufacturers use on their smaller-bore machines to improve top-end revs without the weight of big rocker arms producing drag. The piston features a new bridge-box design that lost 17 grams in overall weight, and the bottom-end rod bearing no longer features rollers and is similar to what KTM/Husqvarna have been using.

Reworking the throttle body to match all the changes to the engine, the Kawasaki engineers didn’t cut any corners. The Keihin unit is 1mm larger at 44mm than the pre-2019 model, and they made big changes to the butterfly. It now pivots with the top moving forward and the bottom moving backward when it opens. With the fine spray injectors located at the top, fuel flows more directly into the engine.
With this complete redesign, Kawasaki still retains the use of its colored programmable coupler system to change ECU mapping. Green is standard, white is leaner or more performance-oriented, and black is richer or less aggressive than standard. It’s pretty simple to understand. 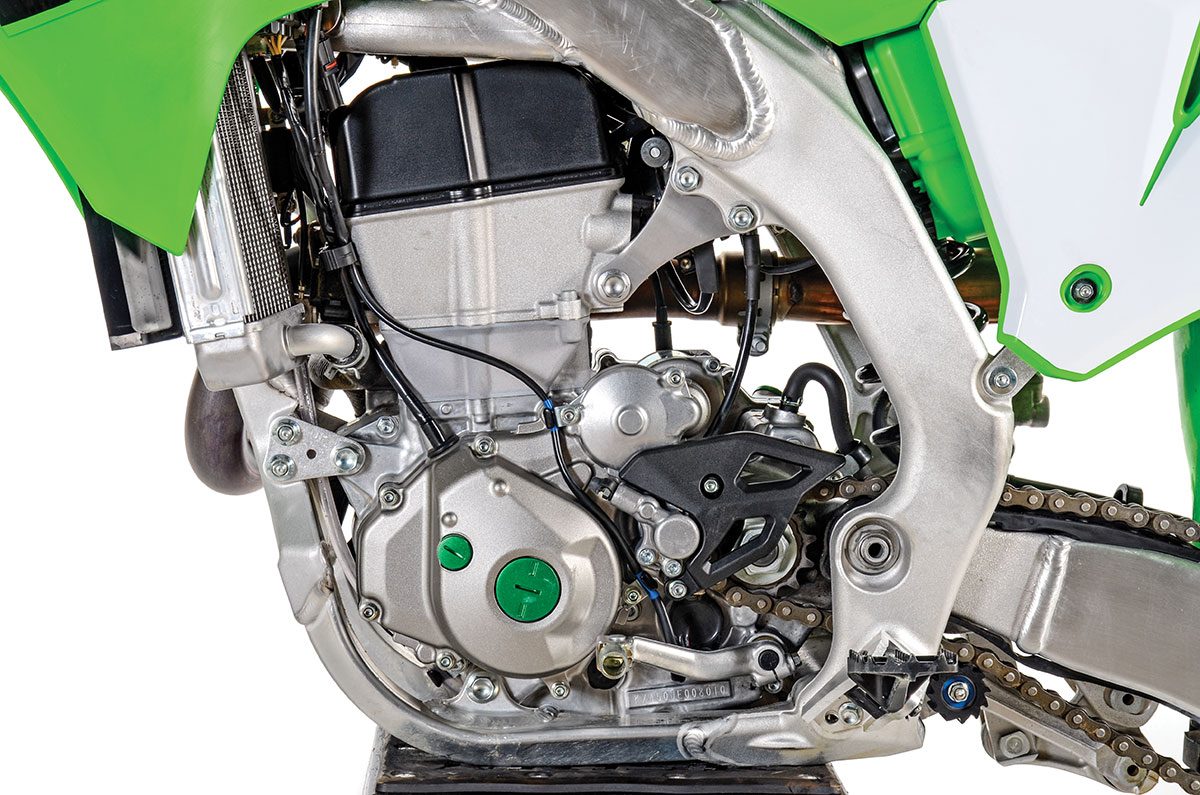 THE BOTTOM LINE
The 2019 model got rave reviews from the media and general public alike. It was the hands-down winner of our 450cc shootout last year—without necessarily being the best at any one thing. The 2020 is basically the same machine with some cosmetic changes. The KX450 feels lighter on the track than the 233-pound number our scale reads and more powerful than the horsepower numbers produced on the dyno, making it a fun bike to ride.

For the first Japanese 450 motocross bike on the market with a hydraulic clutch, we give the Kawasaki engineers credit for thinking outside the box and a big thumbs up for designing something that works great. It’s one of the most adjustable bikes in the class, and with their departure of the Showa Air Fork and the addition of coil-spring units, last year’s overall handling and rider comfort were rated towards the top of the 450cc class. Braking power on the KX450 is strong—maybe even a little too strong at times in the rear—causing the rear wheel to lock up on occasion for the brake-dragging rider.

No one can complain about electric start, unless it doesn’t perform, but the KX450 system works flawlessly. There are a few things that we think Kawasaki can improve on, though—the grips are hard and feel small, there are no on-the-fly mapping-change capabilities, and what is with the 7/8-inch handlebars? Like we said last year, “The new KX450 is more than just good. It’s a truly great motorcycle that proves what Japan can do.” Can it stay on top of the very competitive 450cc MX class for another year without making any significant changes? Only time will tell, but we think it has some pretty good odds.